‘It’s a nod to Giannis’ background — his true journey’

10:04 AMAt the beginning of the 18-month design process of NBA MVP Giannis Antetokounmpo’s first sneaker — the Zoom Freak 1 — Nike’s product team wanted to get to know its newest signature basketball athlete as well as possible. So, during an initial brainstorming session at the brand’s headquarters in Beaverton, Oregon, in the fall of 2017, the Milwaukee Bucks superstar was peppered with every question imaginable, from, What’s your favorite food? to What’s your favorite movie? 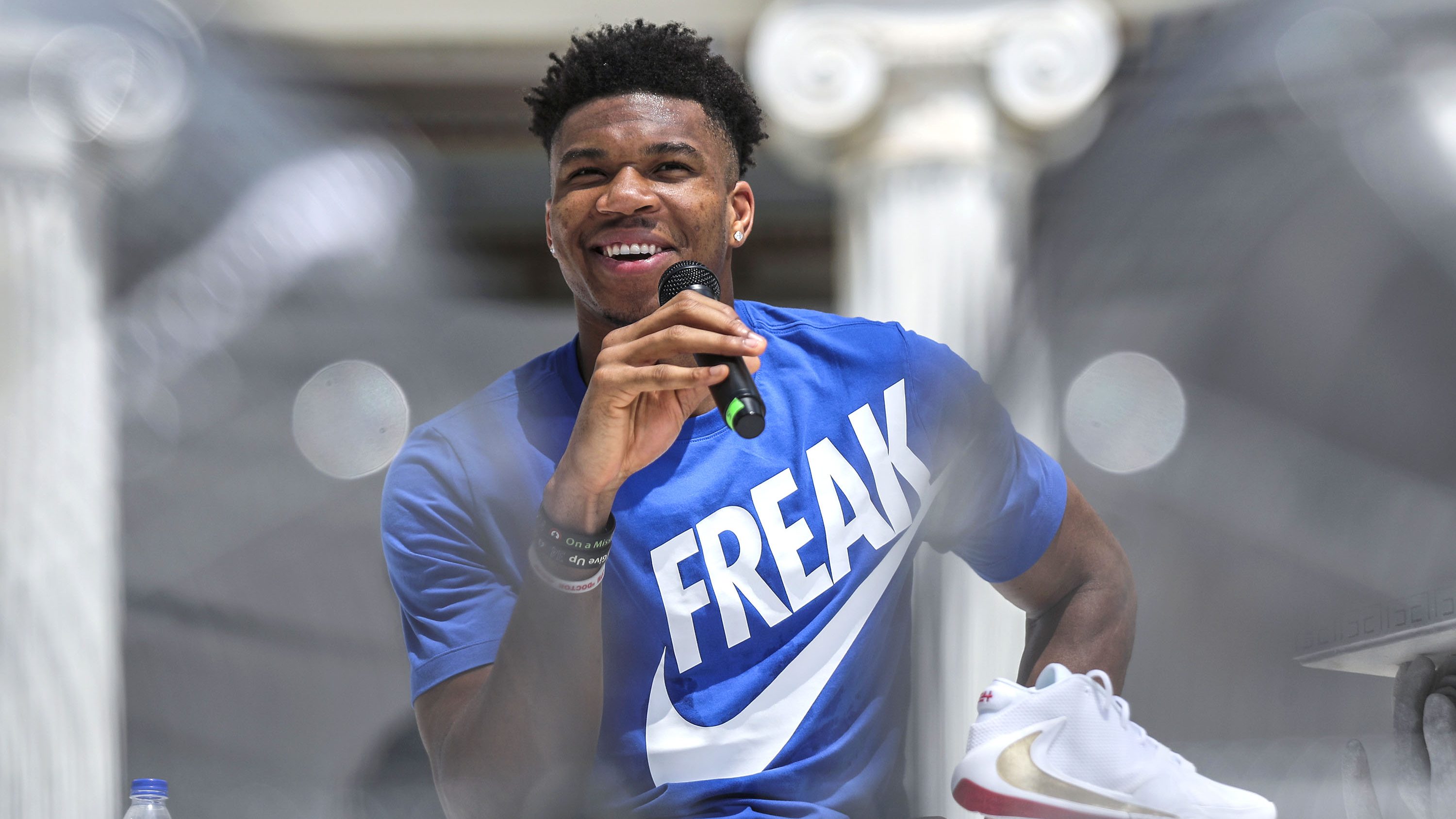 “Giannis said his favorite movie was the ‘Prince Akeem movie’ … and we were like, ‘What are you talking about?’ ” recalled Kevin Dodson, Nike’s global vice president of basketball footwear. Eventually, Dodson and his team figured out what the native of Athens, Greece, meant. “We’re like, ‘Oh … Coming to America.‘ He’s like, ‘Yeah, that’s what you call it here. We don’t call it that. We call it the Prince Akeem movie.’ It kind of inspired us, honestly, on a bigger narrative that was about his journey coming to America.”

Nearly two years later, Antetokounmpo’s favorite movie has come to life on his own shoe. Nike Basketball delivers its first international signature athlete a Coming to America-inspired Zoom Freak 1, “embellished with animal print and rich gold accents to mimic the royal garb worn by Prince Akeem upon his formal entrance to the U.S.,” according to a Nike news release. The brand officially collaborated with Paramount Pictures for the release of the sneaker that hit retail on Friday for $120 a pair, along with an apparel collection that features a hat, track jacket, T-shirt and shorts. 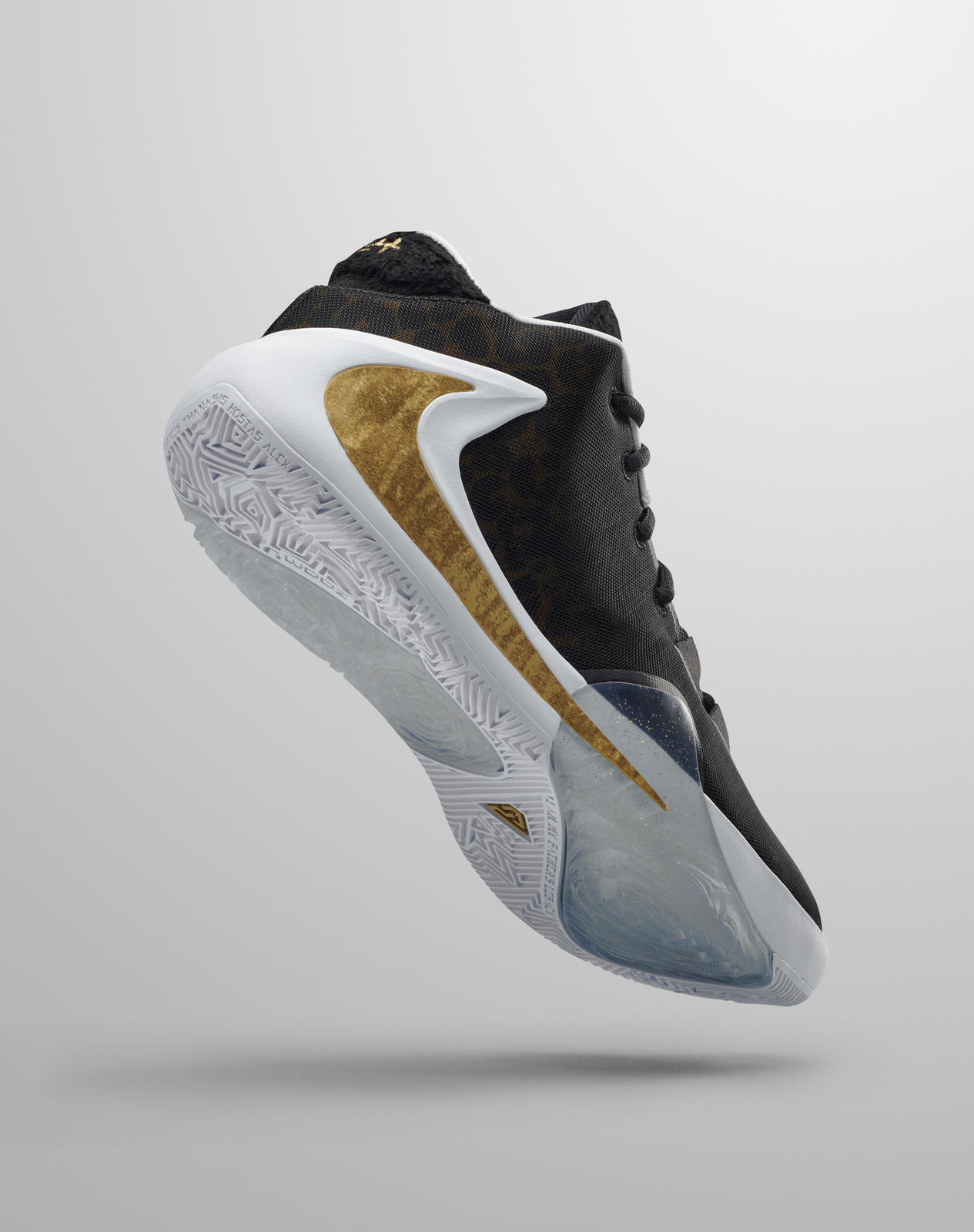 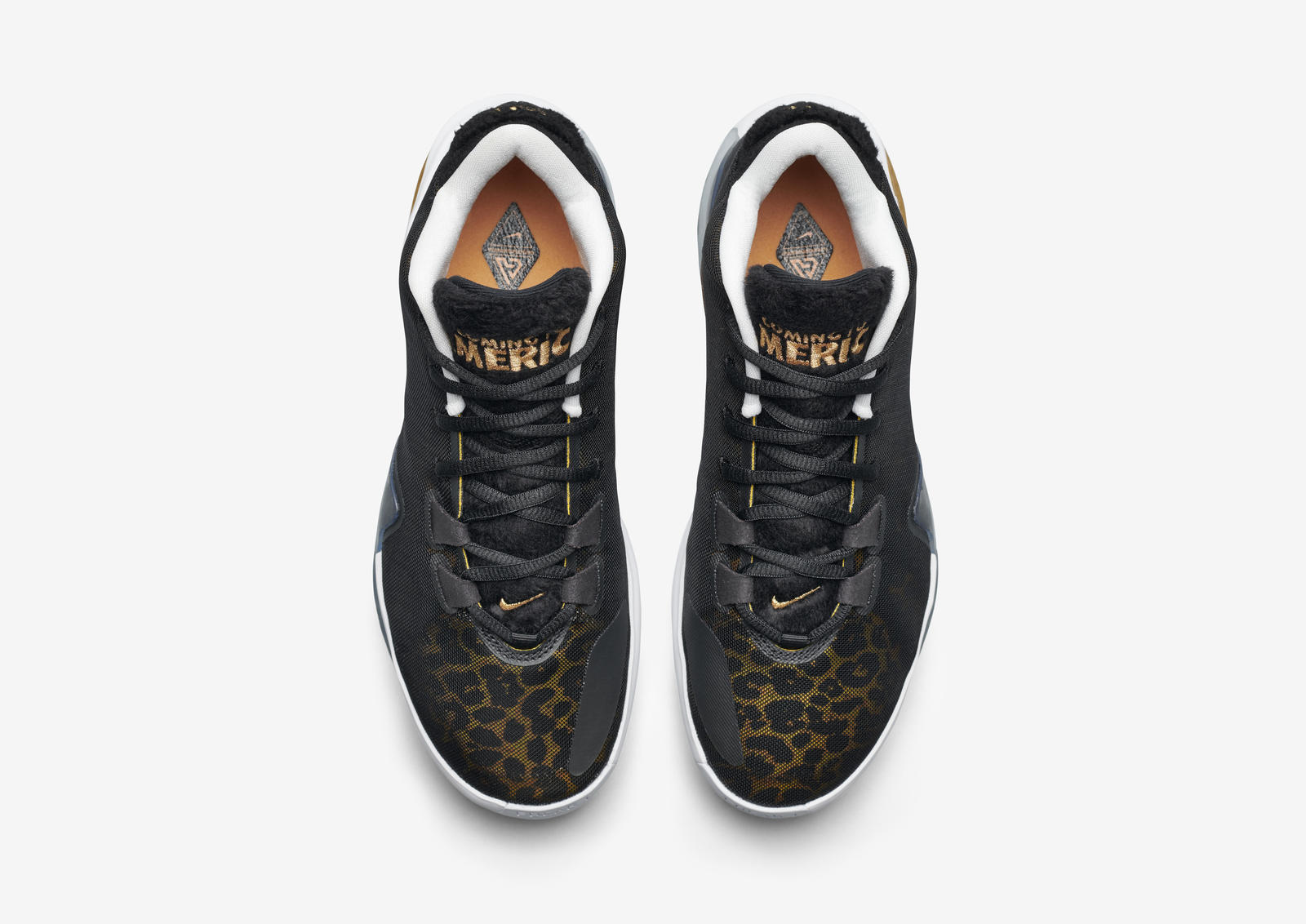 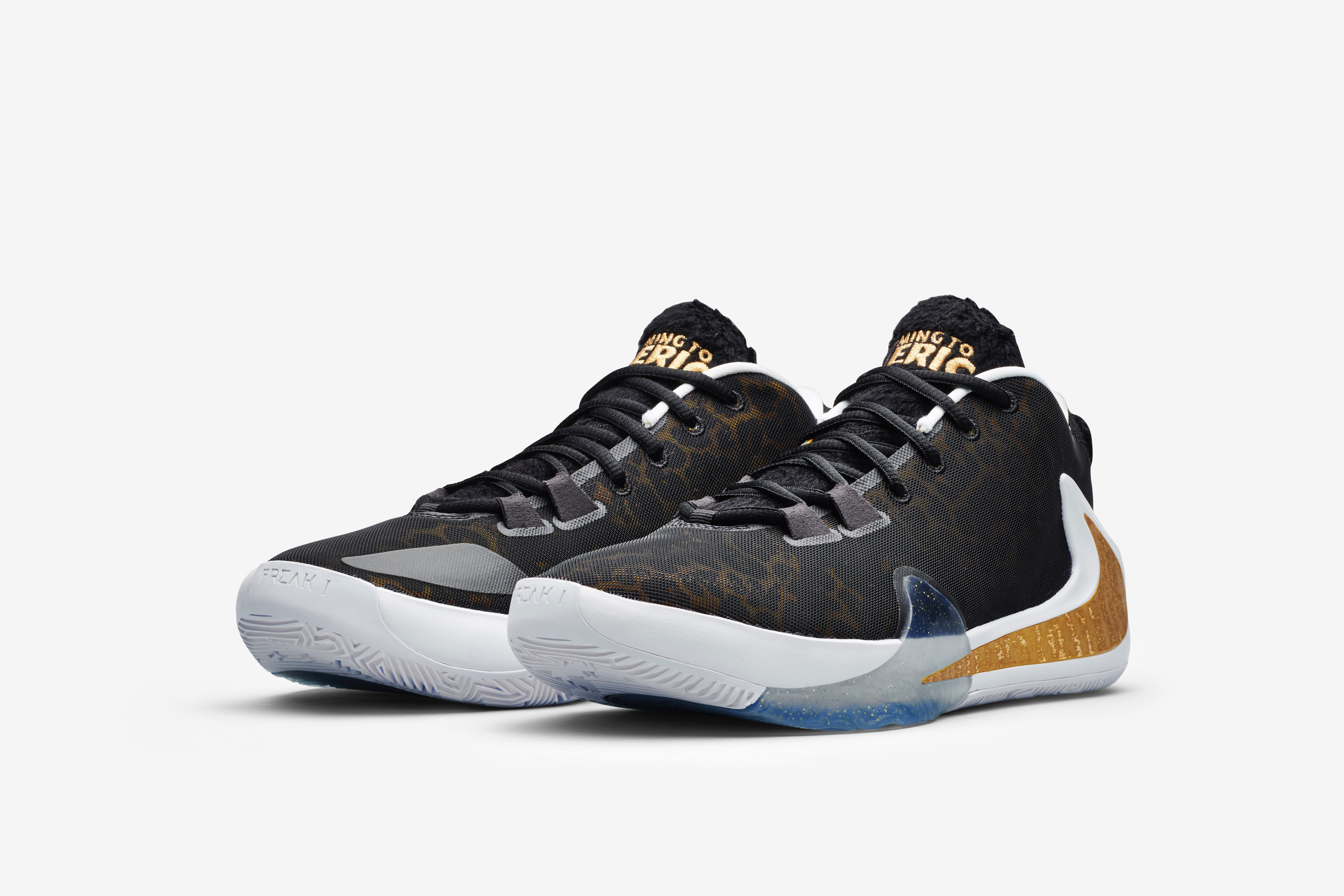 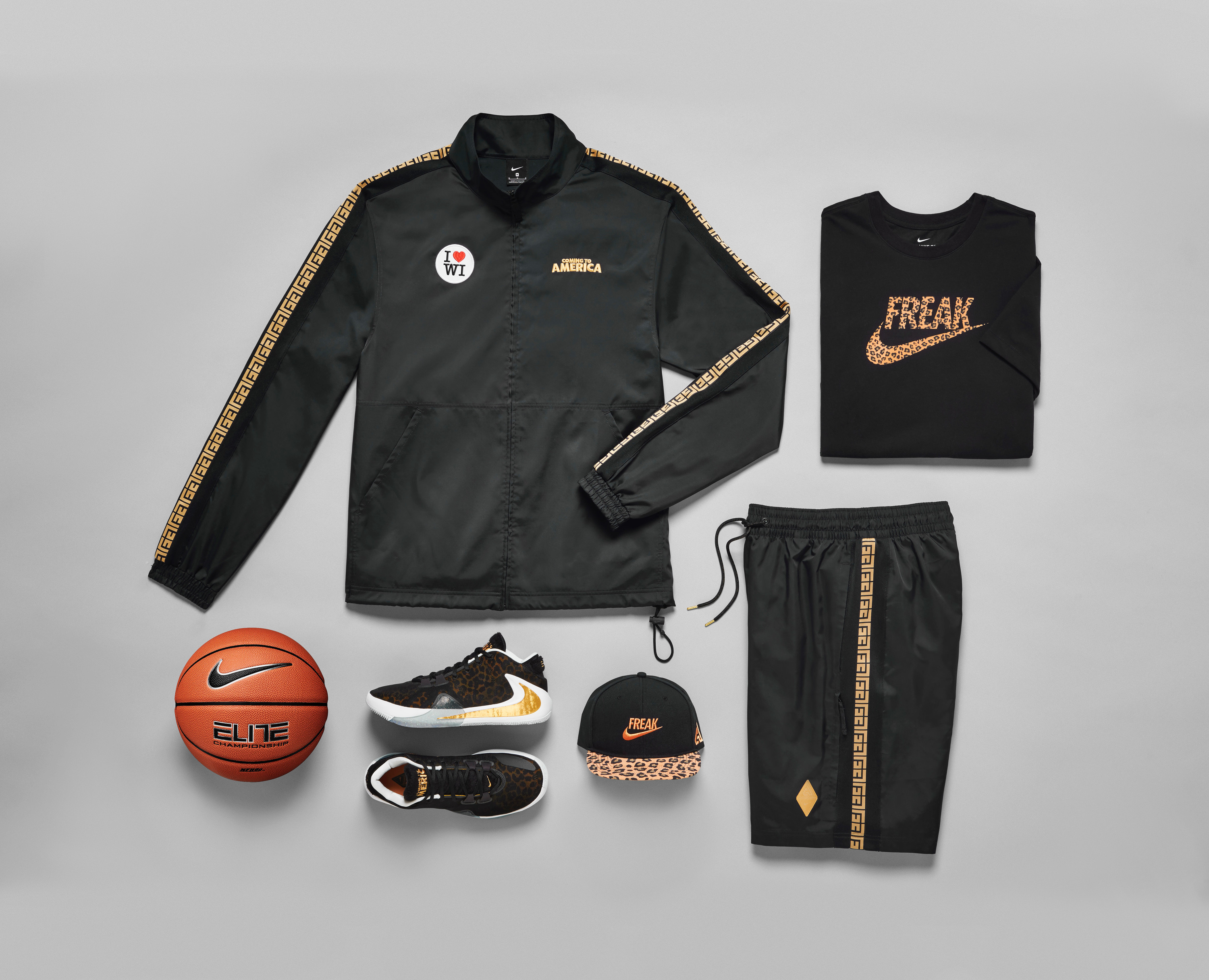 As part of the rollout of the shoe, Nike also swapped out America star Eddie Murphy for Antetokounmpo in a recreation of one of the original posters for the movie, which debuted in theaters on June 29, 1988, the day after the 1988 NBA draft. Halfway across the world three years later in 1991, Antetokounmpo’s parents, Charles and Veronica, emigrated from Lagos, Nigeria, to Athens, where he was born in 1994, and raised along with his brothers.

Though the Antetokounmpo family couldn’t afford certain luxuries like cable, Antetokounmpo and his brothers discovered Coming to America during their childhood and fell in love with the film. It tells the story of Prince Akeem Joffer (Murphy), heir to the throne of the fictional African kingdom of Zamunda, who travels to Queens, New York, with his loyal servant and best friend Semmi (Arsenio Hall) hoping to find true love with a woman who could be his queen. In a weird way, there are some parallels between the journeys of both the fictional Prince Akeem and Giannis Antetokounmpo.

In 2013, Antetokounmpo traveled to Brooklyn, New York, with his older brother Thansasis, hoping to be drafted into the NBA. And similar to Prince Akeem — who in Coming to America ultimately falls in love with and marries Lisa McDowell (Shari Headley) — Antetokounmpo got his happy ending. He was selected by the Milwaukee Bucks with the 15th overall pick in the 2013 NBA draft. Since then, he’s evolved into a three-time All-Star, the 2019 league MVP, and now has a signature sneaker — with a special edition dedicated to his favorite movie.

Nike has also teased additional models of Coming to America-themed Zoom Freak 1s, including a “Soul Glo” colorway. (Fun fact: The Jheri curl worn in the movie by Eriq La Salle’s character Darryl Jenks, as well as the fictional Soul Glo franchise was directly inspired by then-Los Angeles Clippers forward and current Oklahoma City Thunder announcer Michael Cage.) Different flavors of Coming to America Zoom Freak 1s should drop before the arrival of the long-awaited sequel to the movie. Earlier this year, it was confirmed that the Coming to America sequel is, in fact, happening, with a scheduled release date of Aug. 7, 2020.

The question is, will Antetokounmpo make a cameo in the new movie. Perhaps as Prince Giannis from a kingdom in Nigeria. At the very least, Prince Akeem and Semmi should definitely rock pairs of Zoom Freak 1s. Make it happen, Paramount. Do it for the culture.

She won the 50 and 100 freestyle races, becoming the first American woman to do it

11:55 AMIt must be something in the millennial water this year!

First 15-year-old Coco Gauff’s run at Wimbledon and now 22-year-old Simone Manuel has made history becoming the first American woman to complete a sweep of the 50- and 100-meter freestyle at a world swimming championship; she accomplished that Sunday night in Gwangju, South Korea.

In the 50 freestyle, she swam won in 24.05 seconds. Coming in right behind her was Sarah Sjostrom of Sweden, who took the silver in 24.07, followed by Australian Cate Campbell, who picked up the bronze, finishing in 24.11 seconds. In the 100 free, Manuel beat Campbell and Sjostrom finished third. Manuel finished the eight-day competition with four gold medals and six silvers.

Manuel said on Twitter: “By no means was this a perfect meet, but that’s okay. I had to bounce back from adversity and trust in God’s plan. Failure isn’t final IF you stay the course and keep fighting. I’m pretty dang proud of myself. All glory to God. Always an honor to be a part of Team USA.”

Manuel made a splash in the swimming world at the 2016 Summer Games in Rio de Janeiro by becoming the first African American woman to win a gold medal in swimming. She won two gold and two silver medals there. Afterward, she helped the Stanford women’s swim team win its first NCAA swim title in 19 years.

Simone Manuel: A letter to my younger self

Manuel and other U.S. swimmers will compete in the 2019 Phillips 66 Nationals this week in Stanford, California.