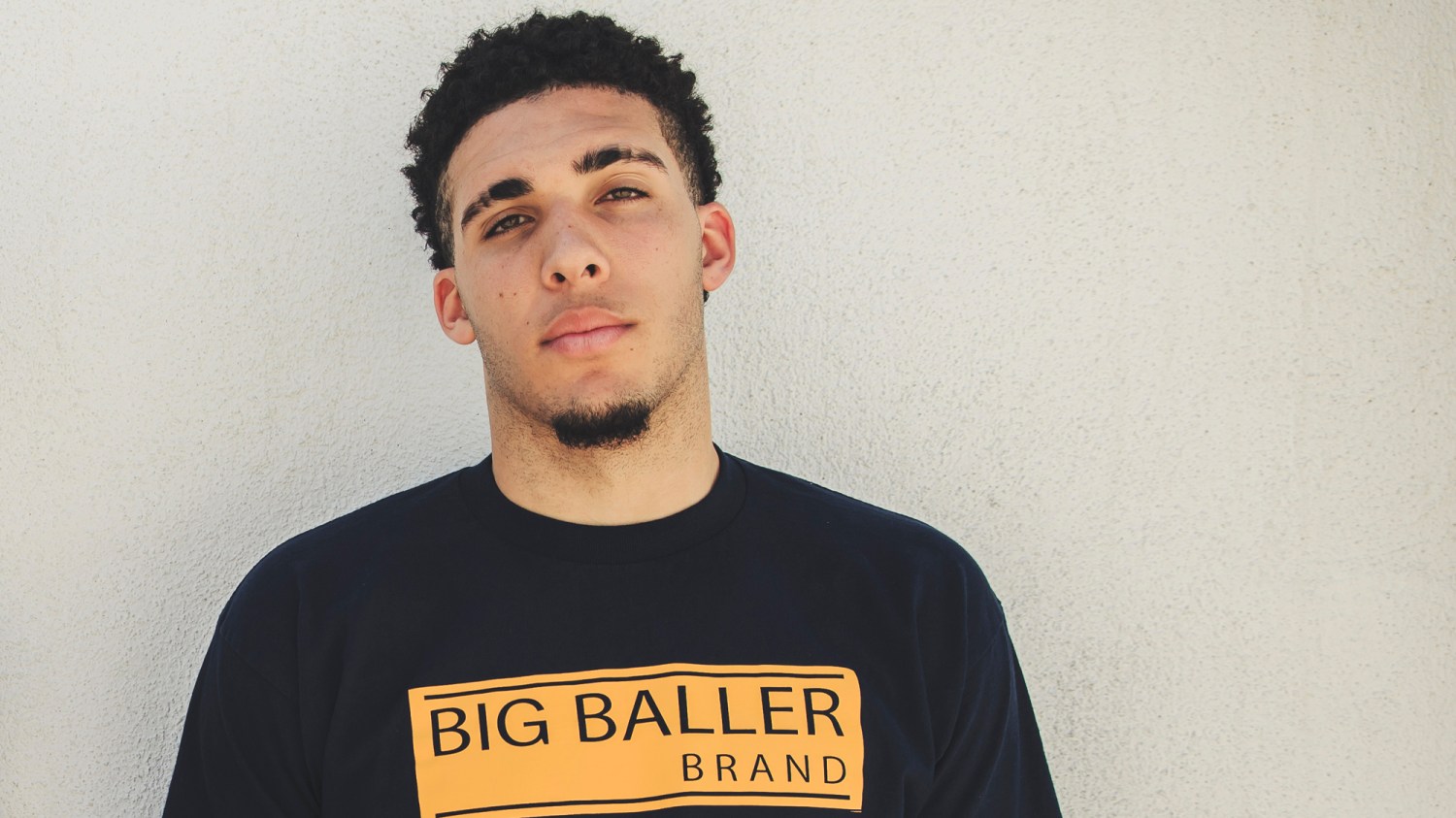 Who is LiAngelo Ball?

The house at the turn of the tidy cul-de-sac at the base of the Chino Hills with BMWs in the driveway and fake green grass (saves thousands on the water bills) is home to an inexplicable burgeoning empire.

Raised voices, laughter and the incessant bounce of a ball are its soundtrack. Nearly everything choreographed by the relentlessly upbeat dad whose voice boomed down these pristine, hilly, upper middle-class corridors.

On this spring morning after several knocks on a 10-foot-high front door, with a huge pane of frosted glass impossible to see through, the bolt turns.

A fresh-faced boy, a pick having not yet touched his hair, sticks his head out. His voice is as quiet as his body is imposing.

“Yes, hello?” he says so quietly one has to lean in to hear.

“My dad is not here,” says LiAngelo Ball, the second son of hoop impresario LaVar Ball, who has delighted and infuriated basketball fans and prognosticators on his meteoric, rule-breaking rise to ubiquity.

Ball in the Family

LiAngelo Ball scored 52 points for Chino Hills High School the night before but is still groggy from seven hours of sleep and greets company with pillow creases on his face.

“You can have a seat and wait for him,” he says.

He points to a plush sectional just off the foyer of the 3,000-square-foot home that all three Ball boys were raised in. There’s a pool table and a printing press machine where LaVar Ball made the first Big Baller Brand T-shirt.

LiAngelo saunters back upstairs in his ankle-socked feet and doesn’t return until his father bursts through the garage door with his youngest son, then 15-year-old LaMelo, in tow.

It’s a much simpler time to be LiAngelo Ball.

On Nov. 7, 6,500 miles from their suburban basketball oasis, the glossy veneer of basketball’s first family was shattered when UCLA freshman LiAngelo was arrested along with teammates Cody Riley and Jalen Hill, accused of shoplifting sunglasses at a Louis Vuitton store next door to the team hotel in Hangzhou, China.

After being released and then detained at a hotel in Hangzhou, the players returned to Los Angeles on Nov. 14. President Donald Trump raised the issue of their release in a meeting with Chinese president Xi Jinping.

UCLA suspended the players indefinitely. Each player apologized during a news conference on Nov. 15 and also thanked the president.

“I didn’t exercise my best judgment and I’m sorry for that,” LiAngelo Ball said. “This does not define who I am. My family raised me better than that.”

The players stole from three stores, were arrested and posted bail of about $2,200, according to UCLA athletic director Dan Guerrero. The charges were withdrawn and the bail money refunded.

The Balls had planned the trip to China months in advance, intending to visit the world’s most populous country to shoot episodes of their Facebook reality series Ball In The Family, set up two pop-up Big Baller Brand shops to establish the family’s brand in China, and attend UCLA’s Pac-12 China game against Georgia Tech.

“I’m going to wait until I get more intel on what’s going on,” LaVar Ball said less than 24 hours after LiAngelo was questioned, arrested and led away to a detention facility. “He’ll be fine. Everyone’s making it a big deal. It ain’t that big a deal.”

But just who is LiAngelo Ball?

LiAngelo is the least known member of the ubiquitous Ball family.

Despite one of the most decorated California prep careers in recent memory — in which he led Chino Hills High to a 65-3 record his last two seasons while averaging 33.8 points, including seven 50-point games topped by a 72-point outburst last December — he pales in popularity to his famous brothers.

His older brother Lonzo’s high profile and younger brother LaMelo’s scene-stealing precociousness have served as a perfect cover for the introverted and painfully shy 18-year-old with no real zest for the spotlight.

He speaks about his career accomplishments in awkward, uninterested tones, his voice often trailing off.

In the Ball brothers’ wildly popular Snapchat and Instagram videos, LiAngelo is often a silent spectator occasionally offering up, “Get yo merch!” the unofficial family motto that implores fans to buy Big Baller Brand apparel.

“He has such a great heart,” said Steve Baik, who coached LiAngelo for three years at Chino Hills. “He was so coachable. He was very respectful. He never talked back or anything. He was a kid who always wanted to learn. He’s one of the most loyal kids I’ve ever come across.”

While his younger brother might be the most popular teenage athlete in the country on social media, LiAngelo rarely tweets to his 176,000 followers.

Thanks to his reserved personality, less than ideal basketball body and absence from any Big Baller Brand promotional material, he’s often the butt of jokes from the Ball family’s largely male, teen, tech-savvy fan base on social media and comment sections across the internet. Gelo on punishment. Why they don’t love Gelo? Everybody knows Gelo was adopted.

“Stay In Yo Cell” and “Big Burglar Brand” memes caught fire after his arrest.

While he brought home good grades and devoted ample time to his studies, LiAngelo disdained the high school experience. He had little interest in school activities or social functions such as dances.

“I’m glad I’m leaving soon,” he said two months before graduation. “I can’t wait to get out of there.”

It was well-known among local Southern California prep reporters that they had a better chance of hitting a half-court shot than getting an inspired quote from LiAngelo, who often made his tight-lipped older brother look like a chatterbox.

His aversion to doing interviews was never more evident than the day after a Chino Hills playoff game last April after a robbery at the Ball home when a television reporter tried to get an update from LiAngelo in the driveway.

Asked whether he likes media attention and giving interviews, LiAngelo shrugged. “It’s OK, I guess,” he said barely above a whisper.

“That’s just how Gelo is,” said LaVar Ball. “He lets his actions speak.”

A family friend says LiAngelo has the closest bond with mother Tina, who suffered a debilitating stroke in February that affected LiAngelo deeply. Tina Ball is slowly recovering, yet has been a fixture at Los Angeles Lakers games and accompanied the family to China.

LaVar Ball, who is personally handling his wife’s rehab, says, “None of my boys is mama’s boys.”

Still, LiAngelo sought refuge in the company of his brothers, whom he calls his “best friends.” The brothers are known for their bond and “no new friends” mentality.

Lonzo famously wrote a song about LaMelo, which served as the official theme song for the release of his Big Baller Brand MB1 sneakers in August. He performed it at LaMelo’s 16th birthday bash.

During his senior year, LiAngelo and Melo’s bond grew with Lonzo off to college. They rarely spent time apart, save for LiAngelo’s weekend overnights at close friends’ houses. They regularly borrowed one another’s jewelry, watches and cologne. Whenever LaMelo needed a shape-up, LiAngelo tightened him up at the kitchen table and came up with the signature Z-shaped part on his left temple.

One afternoon last spring, LaVar Ball pressed a $20 bill into LaMelo’s palm. LaMelo hopped into the passenger seat of LiAngelo’s 2016 BMW 735i and drove to a nearby mall for strawberry smoothies. “Hurry up,” chided an impatient LiAngelo as they entered the shop. But when the cashier rung up the order, the older brother paid.

He shares many of the same quirks of his brothers: syrup on his eggs, fondness for MCM backpacks and a tendency to instigate when the camera phones come out — usually to goad LaMelo into one dare or another.

The fallout from LiAngelo’s arrest, for his career and Big Baller Brand, is uncertain.

“I was surprised when I heard the news,” said Baik. “It was a shocker to me. Not just for Gelo but all three boys.”

Twenty minutes after the Lakers’ 124-112 win over the Brooklyn Nets at Staples Center on Nov. 3, LaVar Ball posts up in his front-row seats behind the basket as family and friends wait for Lonzo to finish his media obligations. LaVar Ball is beaming. The much-anticipated trip to China is two days away.

“I told you we was going global,” he says to no one and everyone. “This trip is going to be good for everybody.”

Several seats away, LaMelo is grinning as if the next wisecrack is on the tip of his tongue. Tina Ball is next to him smiling and taking it all in. Her four-point cane sits at her knee. LiAngelo sits stoically on the end. He’s due back at UCLA later that night. The team is flying out at 2:30 p.m. the next day, and the players still need to be briefed on the itinerary and rules. They’ll be in Shanghai by 7. Then they will board a bus for the 120-mile, three-hour trip to Hangzhou.

LaVar Ball took selfies with fans after the game, his voice booming around the arena as Staples Center cleared out. Lonzo finally emerged from the tunnel and needled his brothers.

“This trip is going to be a game-changer,” LaVar Ball again reminded them.

LiAngelo’s life changed unexpectedly on an off day abroad. Alford had planned to talk about the team’s cultural learning that night.

LiAngelo, who turned 19 on Nov. 24, is not the same person who boarded that jet for China. The safety of his room with LaMelo popping in, dad calling him for breakfast, jerseys on his wall and typical teenage clutter doesn’t exist anymore.

He did chores, dishes and garbage detail, in Chino Hills in that quiet neighborhood up until the day he left for UCLA.

It was a much simpler time to be LiAngelo Ball.

Chris Palmer is a long time NBA writer from Prince Georges, County, MD. His tattoos and crossover are a work in progress. He and Kevin Durant almost always agree.