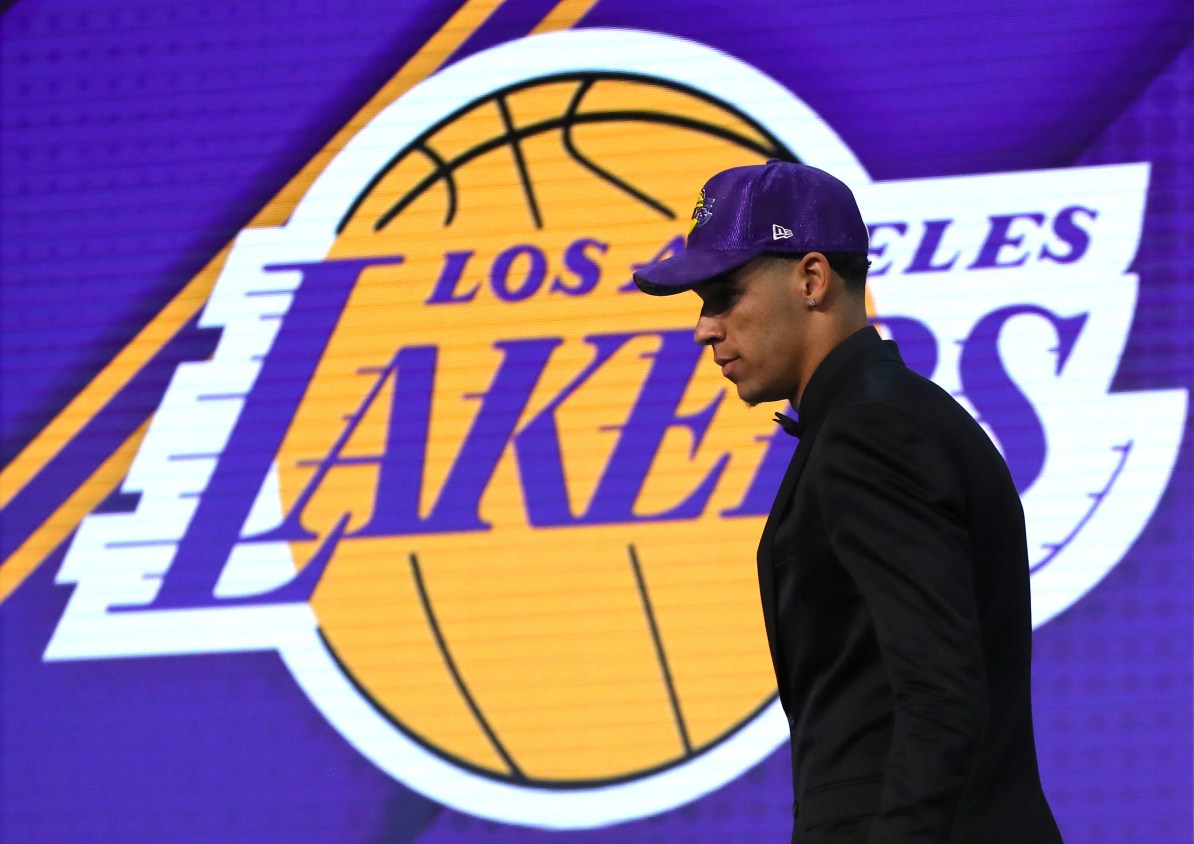 Lonzo Ball walks on stage after being drafted second overall by the Los Angeles Lakers during the first round of the 2017 NBA Draft at Barclays Center on June 22, 2017 in New York City. Mike Stobe/Getty Images
2017 NBA Draft

From a shoe change to countless interviews and a superproud father, the No. 2 pick was the star of the 2017 NBA draft

From the fourth row of Section 124 at the Barclays Center in Brooklyn, New York, Patrick Esposito screamed his hero’s name, hoping for some type of acknowledgment — a glance, a nod, a wave, something — from Lonzo Ball, who sat in the green room area of the arena.

The clock read 7:08 p.m., and NBA commissioner Adam Silver had yet to take the stage to mark the commencement of the 2017 NBA draft, yet Esposito donned a customized gold Lakers jersey featuring the No. 2 and the name “Ball” across the back.

“I’ve had this since April,” Esposito, a native of Flemington, New Jersey, told The Undefeated, “before they even had the pick. It was kind of risky.”

“I bought this in April." pic.twitter.com/QS4p07Dnhx

After just one season at UCLA, a trip to the Sweet 16 of the NCAA tournament, the launch of his own $495 signature sneakers through his family’s Big Baller Brand and the everlasting array of bold proclamations from his outspoken father, LaVar, the moment had finally arrived for the skilled 6-foot-6 point guard from Chino Hills, California.

Would Ball’s fate be cemented the way his father predicted the night of the draft lottery in May, when he declared his eldest son would work out only for the Lakers, and guaranteed that their family’s hometown team would select him with the No. 2 overall pick?

“I sure hope so,” Esposito said as the draft drew closer, while a few feet away on the Barclays floor, prospects and company took their seats. Everyone except for Ball’s agent, Harrison Gaines, a former University of Pennsylvania and University of California Riverside college hooper, who stood over Ball’s table full of family and guests. Security eventually ushered Gaines to a seat next to University of Kansas head coach Bill Self on the side of the floor near the stands.

The draft finally began, and moments after Silver’s announcement of former University of Washington point guard Markelle Fultz as the Philadelphia 76ers’ No. 1 pick, Gaines emerged at Ball’s table with his cellphone in hand. He passed it to Ball, who let it rest on his right shoulder before breaking out into laughter and quickly handing it back. Gaines grabbed the shoulders of both Ball and his father before six cameras swarmed.

“What’s supposed to be done,” LaVar Ball told The Undefeated. “This day has been exactly like I expected it.”

The night that Ball became a Laker, however, was far from over.

At about 5:50 p.m., the Balls were one of the first families to arrive in the green room. Ball’s brother LaMelo swagged out a candy red blazer to complement his blond-tipped hair, while LaVar Ball and his middle son, LiAngelo, both sported all-black suits with gold-accented BBB ties.

They watched from their seats at the table as Ball took a pre-draft group photo with his fellow prospects. Onstage, Ball wore all black like his father and brother in the form of a three-piece suit with a BBB bow tie, finished off with black dress shoes.

Yet, after Silver called Ball’s name and he stood up to embrace his family, his feet looked different as he walked over to grab his New Era Lakers hat and journeyed across the stage. Ball changed into a pair of white, gold and purple “Sho’time” ZO2 on-court sneakers that immediately went on the BBB website for presale.

“I had them for a minute,” Ball said. “Just had a good feeling, and changed them five minutes before when they was on the clock, and I’m glad they called my name.”

Just like his son, LaVar Ball also made a wardrobe change, throwing on a gold and purple BBB hat, which ESPN’s Jeff Goodman couldn’t help but ask about during an on-camera interview at the table.

“I’m tryna tell you, I knew this was happening before it was happening!” LaVar Ball told Goodman. As for when the hat celebrating his son’s achievement was made? “When he was a baby,” he quipped.

Meanwhile, Ball was doing a lot of talking himself. He didn’t leave the arena floor until completing three interviews: two on camera and one for radio. He then made his way to the interview room, where he spoke to reporters about the feeling of being drafted.

“It felt great. You know, my dad was right there, my brothers. I know mom is watching at home …,” he said of Tina Ball, who in late February suffered a stroke that didn’t allow her to be in attendance for her son’s big moment. “No, she still can’t talk yet, but she understands me. So when I get home, I’ll get to talk to her. I know she is happy at home, for sure. When I get back, we’ll have that conversation, and it’ll be a great time.”

Ball’s discussion of his mother wrapped up his fourth, and far from last, interview of the night and put him on the move again, as he walked back and forth between rooms in the bowels of Barclays, flanked by both Lakers and NBA communications reps. Next up: a phone call with the front office of his new team.

Alison Bogli, director of media relations for the Lakers, handed her phone to Ball, who placed it on speaker and began listening intently. On the other end of the call were Lakers general manager Rob Pelinka, head coach Luke Walton, co-owner and team president Jeanie Buss, co-owner and director of scouting/assistant general manager Jesse Buss, and Lakers Hall of Famer and president of basketball operations Earvin “Magic” Johnson — the man many consider responsible for drafting Ball.

“Magic, like I told him, ‘I trust you with my boy.’ He’s got another level to go to, and he gon’ get him there,” LaVar Ball told The Undefeated. “That’s the same thing I told [UCLA head coach] Steve Alford. I said, ‘You know what, I took Zo as far as I can take him, and I’m gonna trust you to take him a little further.’ Now, I’m gonna trust Magic to take him even further. He’s like an open book. He ain’t gonna do nothing but get better.”

Ball could barely gasp for air after the phone call. “You’ve got a longgggg night of media ahead of you,” Bogli informed him at 8:22 p.m., commencing a flurry of interviews. In the Brooklyn Nets’ practice gym, which was turned into a room full of interview booths, the new Lakers point guard spoke on every platform from Jimmy Kimmel Live! (the talk show’s personality Guillermo Rodriguez was there to hold the microphone for him) to Los Angeles’ Spectrum SportsNet to ABC to CBS to the Pac 12 Network with Lewis Johnson to Yahoo’s The Vertical to SiriusXM NBA Radio to Cisco International (through which he spoke to reporters in Brazil, the Dominican Republic and Mexico) to China’s Tencent Media, and even a one-on-one with Jr. NBA reporter Max Bonnstetter (Ball enjoyed that one with his “man with the bow tie”). The entire time, NBA communications officer Kelly Williams kept crossing outlets off her list, only to send him somewhere else. In between interviews, he even stopped by the gifting room, where he accepted a brand-new Tissot watch, took photos and videos for the NBA’s social media feeds and partook in a Q&A with fans on the Lakers’ Twitter account.

By the time the No. 2 selection looked up, the draft had progressed well into the teens. “Where did he go?” Ball asked of his former UCLA teammate T.J. Leaf, who was taken with the No. 18 pick by the Indiana Pacers. “That’s where he wanted to go,” he added with a smile.

When the night closed in on 10 p.m., Bogli led Ball away from the booths, determined to get him back to his family before she had to do the routine all over again with the team’s later picks. But no one would command as much attention as Ball. At this point, you couldn’t really consider him the man of the hour anymore, as two hours had come and gone since he shook Silver’s hand onstage.

“Everything is still sinking in right now,” Ball told The Undefeated while walking through the tunnel behind the Barclays court. “I’m happy to be a Laker … but I’m very happy the process is over. I just want to get on the court and start playing.

“My passion is my job now. You can’t really beat that.”

LaVar Ball’s night wasn’t quite over, though. As he exited the floor to reconvene with his son, LaVar Ball responded to the loud chorus of Barclays boos directed at him by pumping his hand in the air before removing his hat and hurling it into the crowd.

As LaVar Ball leaves, he throws his hat into the stands. This kid caught it. pic.twitter.com/QIIsGOrb5x

A souvenir from the long night that Lonzo Ball began as a prospect and ended as a Los Angeles Laker.