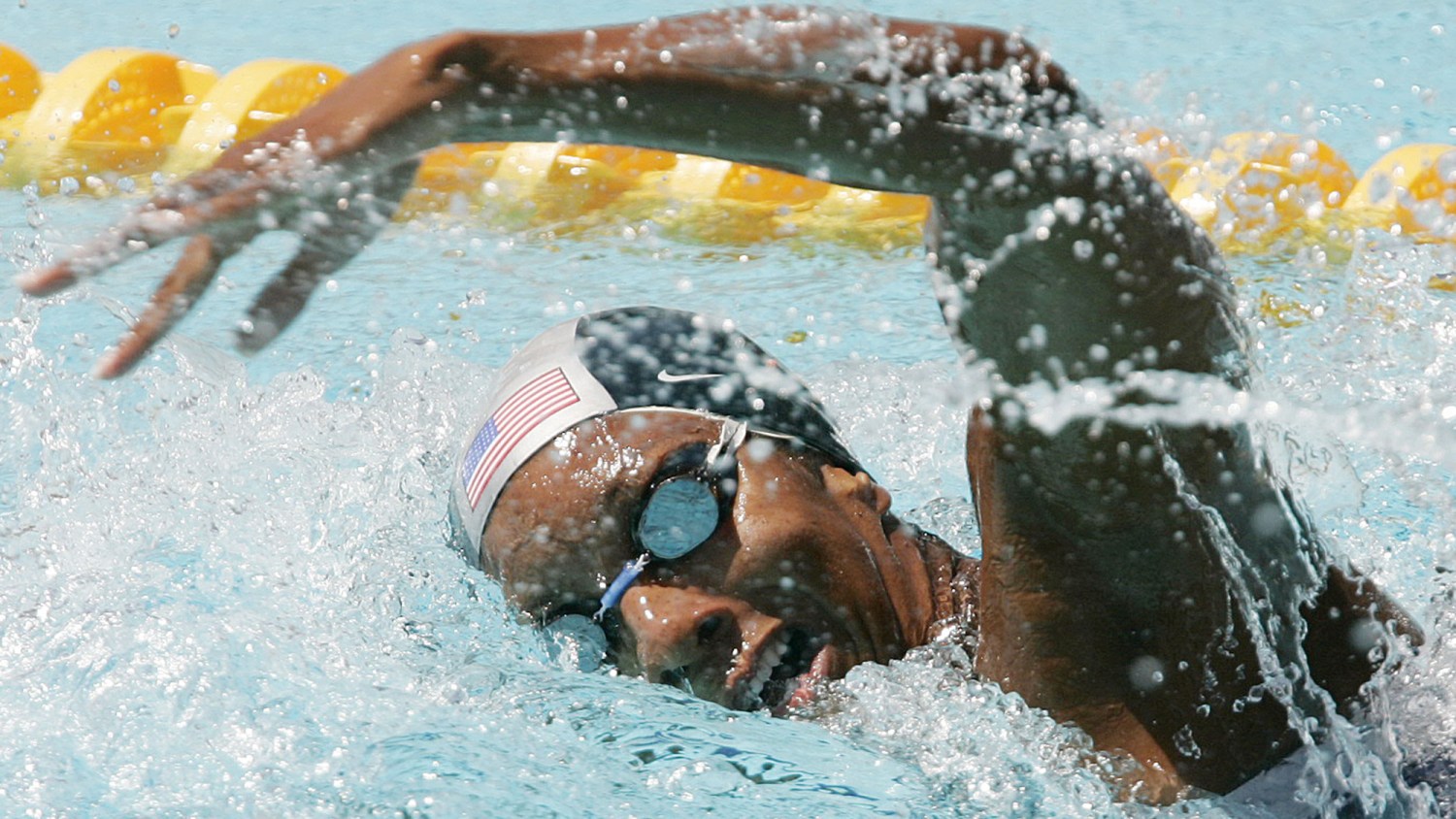 Maritza Correia of the U.S. swims a leg in a heat of the 4x100m freestyle relay at the Olympic Games Saturday, Aug. 14, 2004 in Athens, Greece. AP Photo/Thomas Kienzle

A league of her own

It was the early 2000s. And before every race, Maritza McClendon faced a starting block, a swim lane, as well as a crowd of spectators watching her every move. McClendon was only one of two black women on the University of Georgia Lady Bulldogs swimming and diving team, but the pressure she felt to win was so heavy it could break her concentration. There was a routine that kept her focused. Inspired by words from her father, Vincent, a former University of London crew member, the swimmer would step to the block, touch her toes and tell herself, “Just do your best.”

McClendon ’s pregame routine was simple, but it helped her become the first black woman to earn a spot on the U.S. Olympic swimming team, break three American records and earn a silver medal in the 400 freestyle relay in the 2004 Summer Games in Athens, Greece. “I remember the experience of walking underneath the tunnel out into the pool complex,” McClendon said. “Just seeing the fans, the photographers and the water looking completely still. It was exciting.” While McClendon achieved greatness, she had to face disappointment and scrutiny from her father throughout her journey.

Born to Guyanese parents in San Juan, Puerto Rico, McClendon was the youngest of three kids. Her mom, a former tennis player at the University of London, was a nurse and her dad was a mechanical engineer. While she was raised in a competitive household, McClendon started swimming because, at the age of 6 years old, she was thrown a curve.

“My mom and I would [walk] to the beach very often, and she noticed that I kind of started walking with a tilt.”

“My mom and I would [walk] to the beach very often, and she noticed that I kind of started walking with a tilt. So she decided to take me to the doctor, and sure enough — scoliosis.” McClendon’s back was 25 degrees off-center and she was very close to needing back surgery. But her doctor recommended swimming or gymnastics as a form of therapy.

“The first lesson I had was just a summer program at someone’s backyard pool,” she said. “The teacher was teaching me to get from one end to the other without drowning.” By the end of that summer, though, she was hooked, and signed up for year-round swimming in Puerto Rico.

“I enjoyed swimming from the get-go,” she said in 2013. “But I wasn’t the best one in the water right away. I had to work to swim fast. I loved to compete and win medals and trophies … I always had a drive to get as many as I could.” McClendon’s family relocated from San Juan to Bradenton, Florida, when she was 9 years old, and in 1990, they moved to Tampa, Florida. McClendon became a member of the Blue Wave Swim Club, and swam up through the USA Swimming ranks.

By 1996, McClendon was watching Olympic swimmer Amy Van Dyken win four gold medals. “I felt like I was living it through her,” she said from her home in Tampa. While McClendon started to flourish, competing at the high school level in Florida, scrutiny from her father was intense. “He kind of came down at me,” she said. “And questioned why I didn’t swim well [at state championships]. I was very upset.” But with encouragement from her mother and teammates, McClendon came back to win six state championships.

The amount of pressure only grew when McClendon began competing at the college level. And at the 2000 Olympic trials, she had the most disappointing moment of her life. “I was expected to make the Olympic team,” she said. “The trials is a nerve-wracking meet. Everything’s different … the pressure is bigger.” McClendon finished in 32nd place in the 200 freestyle. “That was one of the most disappointing races I’ve ever had,” she said. “It was so bad that after my 200 freestyle race, my dad actually booked me a ticket and sent me home when I still had two more races to compete in at the trials. I didn’t get another chance to try to make the team, so when I got home, the next several months I fell into a little depression.”

But the 2000 Olympic trials didn’t kill the fight in her. She returned to the University of Georgia and performed beautifully at the NCAA Championships in the 50 relay, 100 relay, 200 relay, 400 relay and 800 relay. “My personality was stronger, my motivation was stronger, my body was stronger,” she said. McClendon is a 27-time All-American and an 11-time NCAA champion at the University of Georgia.“I was definitely out there to make sure what happened in 2000 didn’t happen in 2004.”

After finishing third at the 2004 Olympic trials in Long Beach, California, in the 400 relay, she made the U.S. Olympic team. “Earning a spot on the Olympic team is special for everyone,” she said in 2013. “But it was an even better feeling to know I made history … I wanted to be a role model to minorities.” And that she is: the first Puerto Rican of African descent to be on the USA Olympic swimming team.

McClendon’s career was cut short due to a double-shoulder injury in 2008. She retired from the sport soon afterward. Now, as a wife and mother of two children, McClendon has another goal. While she’s transitioned from being an Olympic swimmer to working at Nike to now working in marketing at OshKosh, McClendon wants to encourage water safety in the black community. “You hear 10 people drown in the U.S. every day, and 70 percent of black children don’t know how to swim.” That’s why McClendon’s now serving as a spokeswoman for Swim 1922, hoping to introduce African-Americans to the sport and teaching them basic water skills.

Outside of her community service, the former Olympic swimmer is also encouraging a swimmer at this year’s Olympics — Simone Manuel. “I’ve known Simone since she was 13,” McClendon said. “It’s kind of amazing to see the progress she’s made over the last couple of years. I think she’s the one to watch.” The swimming vet also mentioned 14-year-old Tristen Ulett, who recently made her second Olympic trials cut. By achieving greatness both in and out of the pool, McClendon continues to be involved with the new generation of competitive swimmers in the United States, but it all started with her getting on that starting block, touching her toes and telling herself, “Just do your best.”

Vance Brinkley is a young writer based in Washington, DC. He loves playing lacrosse, watching indie films, and listening to music from Project Pat to Toro Y Moi.