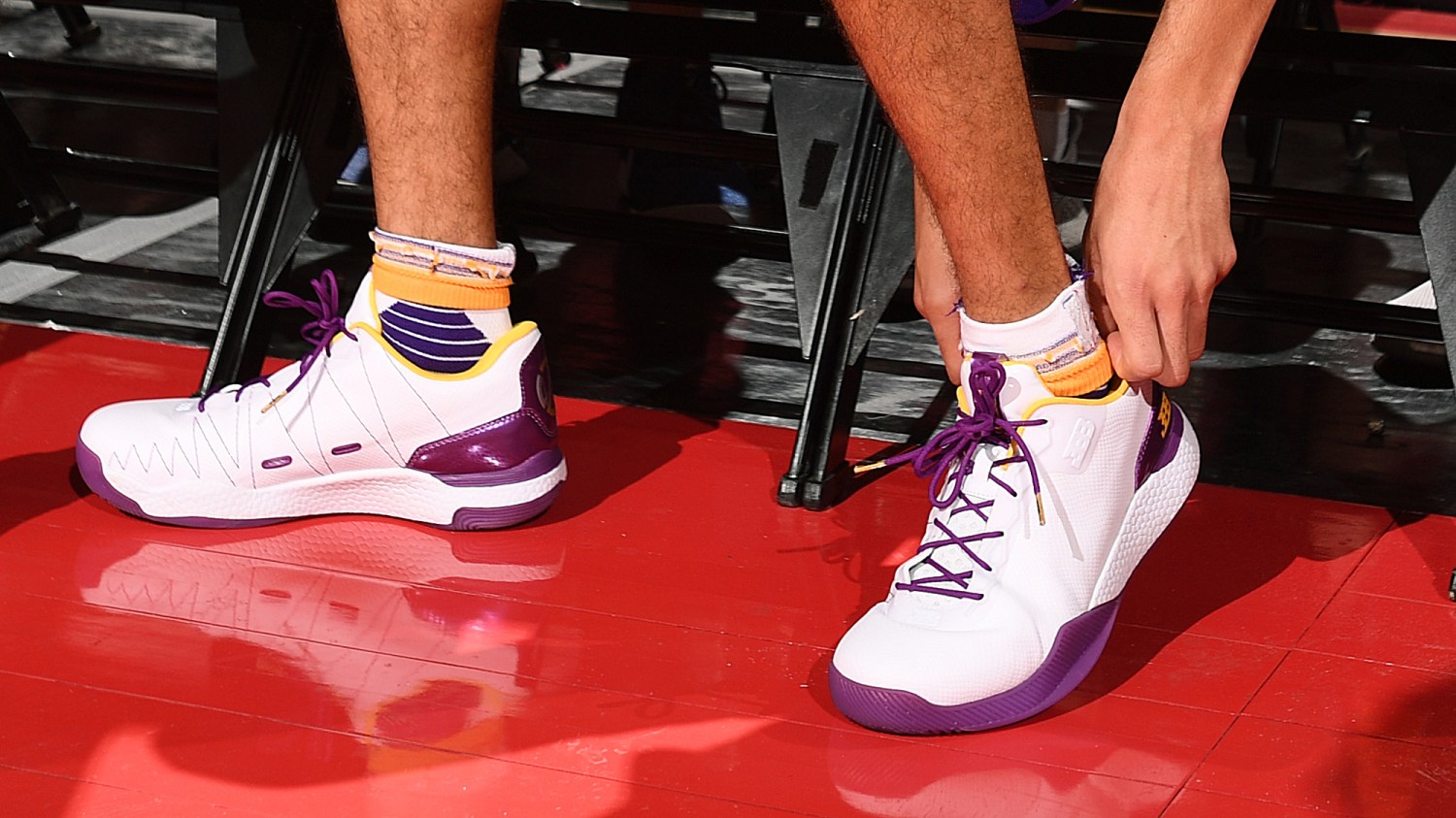 Lonzo Ball #2 of the Los Angeles Lakers puts on his shoes against the Los Angeles Clippers on July 7, 2017 at the Thomas & Mack Center in Las Vegas, Nevada. Garrett Ellwood/NBAE via Getty Images
Sneaker Stories

Just like Kobe in 2003. Here’s how Ball’s looks compare with the Black Mamba, side by side

Lonzo Ball is a Los Angeles Laker, but in the sneaker world? He’s a free agent. As innovative and genius as his shoe decisions have been this summer, we’ve seen it before in Los Angeles — from one of the greatest Lakers of all time. Ball already has his own signature shoe — the heftily priced $495 ZO2s, made by his family’s Big Baller Brand — but the rookie point guard and Las Vegas Summer League MVP has kicked off his NBA career by playing the field when it comes to footwear.

In the Lakers’ two opening summer league games, Ball, as expected, took the court in his BBB kicks. First, he made his pro debut in a pair of white, purple and gold “Sho’time” Z02s. These are the same ones he wore when he walked across the stage after the Lakers chose him with the No. 2 overall pick in June’s draft. Playing in them, Ball posted an abysmal 5-point, 5-assist and 4-rebound performance in a 96-93 loss to the Los Angeles Clippers. The next game, an 86-81 loss to the Boston Celtics, Ball bounced back with a triple-double (11 points, 11 assists, 11 rebounds) in a pair of black and gold “Prime” ZO2s.

Yet, in the next four summer league games in which he appeared, Ball did not lace up his ZO2s. Instead, he flipped the script by playing in Nikes, James Harden’s signature Adidas, Stephen Curry’s signature Under Armours and Air Jordans. “When you’re a big baller, you can wear whatever you want,” he told TNT’s David Aldridge after recording a monster 36 points in a 103-102 win over the Philadelphia 76ers in a pair of Nike Kobe ADs. Once Ball began to stray from BBB, each night the Lakers were scheduled to play, folks on social media were pressed about what he had in store — like, “What shoes would Lonzo wear next?”

“It’s making a statement to the brands of what they could have had with an open mind,” LaVar Ball told ESPN’s Darren Rovell of his son’s summer league turned sneaker free agency. If you remember, the Ball family met with Nike, Adidas and Under Armour before the NBA draft, but all three sneaker companies passed on signing the 19-year-old phenom. Since he already had a prototype shoe, LaVar Ball was simply asking too much of the companies, calling on them to license BBB from him. Never in the history of sports, or sneakers, had there been such a demand.

Early in his career, future Hall of Famer Kobe Bryant spent a season as a sneaker free agent.

“If the price is right,” LaVar Ball continued when asked whether there’s a chance his son could still ink a deal with a big shoe company. Perhaps a bidding war is in store? “Something like that,” Lonzo Ball said before the summer league semifinals.

Yet, as bold as Ball was with his summer league sneaker changes, there’s a close-to-home precedent. Early in his career, future Hall of Famer Kobe Bryant spent a season as a sneaker free agent. After signing with Adidas as a rookie, and becoming the face of five different pairs of signature sneakers, Bryant reportedly dropped a whopping $8 million to part ways with the company in 2002.

Also included in the deal was the agreement that Bryant wouldn’t sign with another brand in 2003. So he spent the 2002-03 NBA season, in which he and the Lakers were chasing their fourth consecutive NBA title, wearing every shoe imaginable. From Air Force 1s to AND1s to Converse and even a slew of Air Jordans, including “True Blue” 3s, “Flint Grey” and “French Blue” 12s and “Concord” 11s. As Ball tests the sneaker market, just like Bryant did back in the day, let’s take a side-by-side look at some of the shoe choices made by the rising star rookie — and the retired legend, nearly 15 years ago. 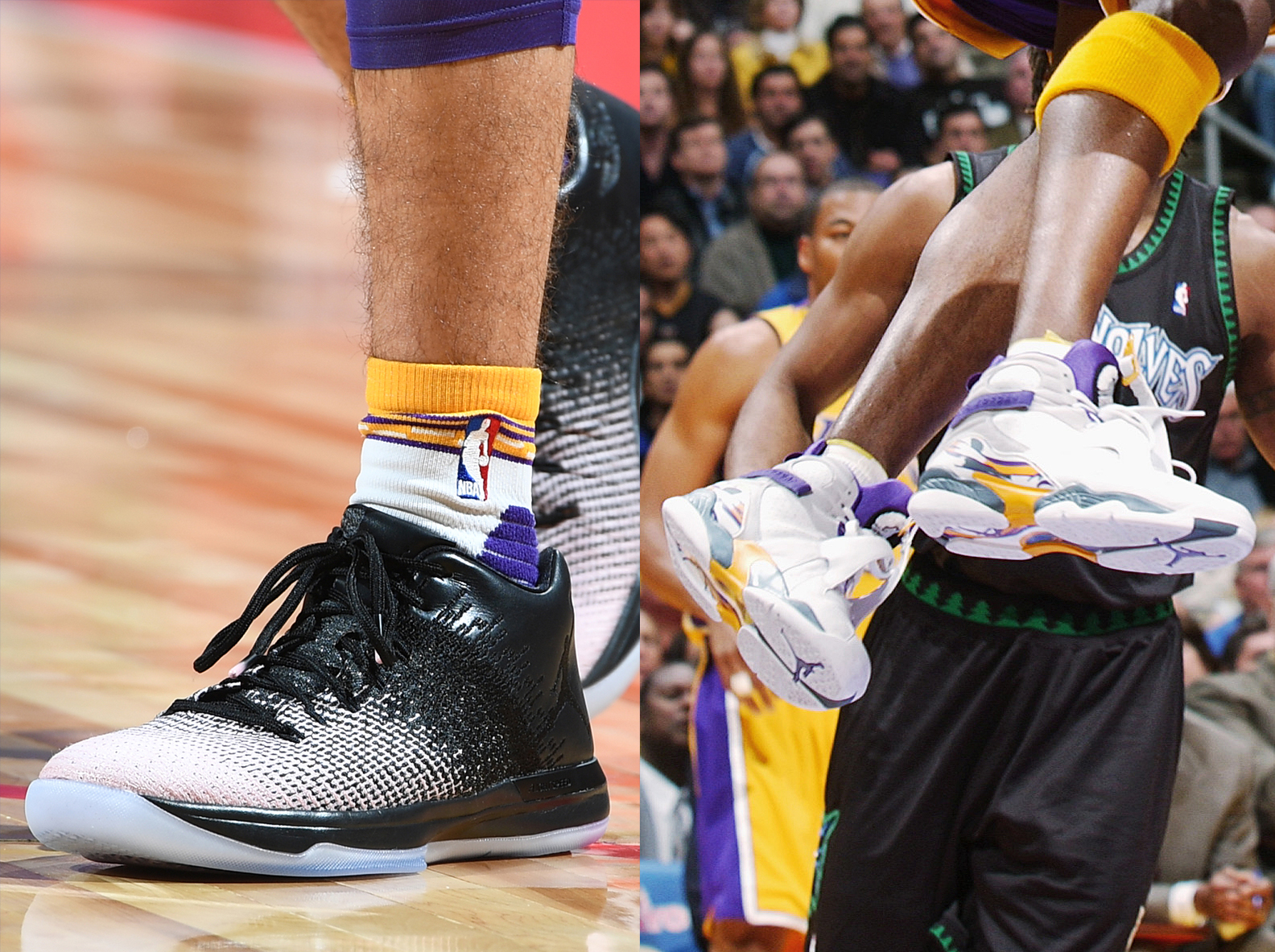 When in doubt, just whip out the J’s. During his season without a sneaker contract, retro Air Jordans, in every edition and colorway he could get his hands on, were Bryant’s go-to. His favorite? Player exclusive Air Jordan 8s in purple and gold, with a white base for home games and black base for road games, made especially for Bryant (he also had PE 3s and PE 7s). As for Ball, he didn’t go retro, but he broke out a pair of low-top Air Jordan 31s in the summer league semifinals against the Dallas Mavericks, posting 16 points, 10 assists and 4 rebounds in just 21 minutes before leaving the game in the third quarter with calf tightness — a better night than he had in a full game wearing the ZO2s during his summer league debut.

Lonzo in Under Armour Curry 4 Finals PE vs. Kobe in Converse Weapons 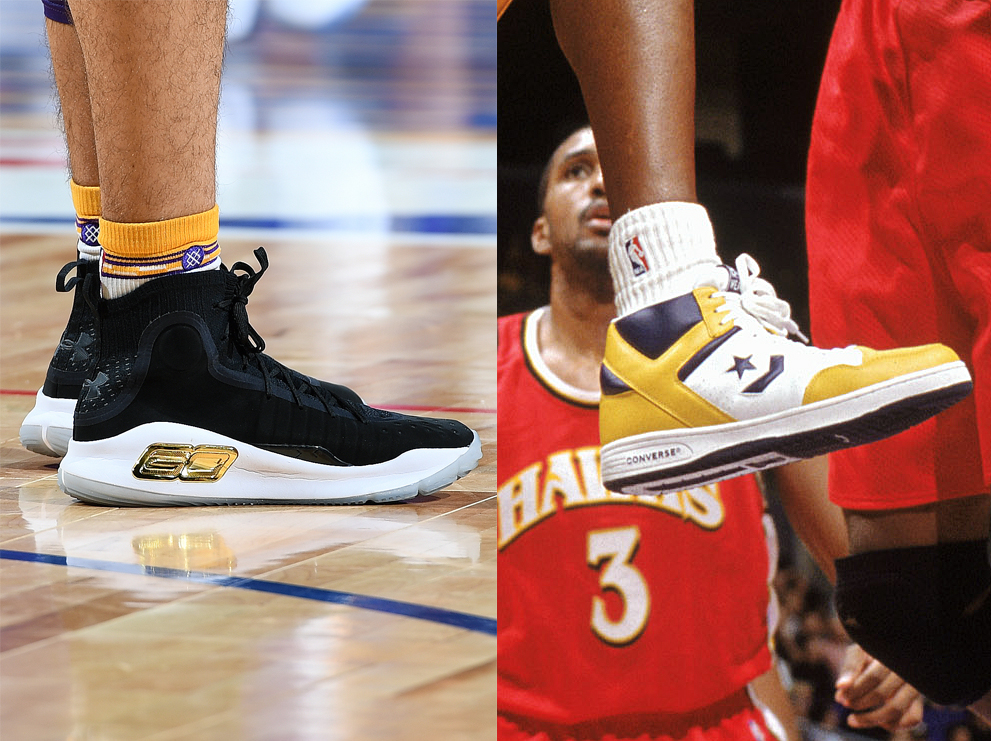 On their feet, both Bryant and Ball paid tribute to championship-winning point guards who came before them. Fourteen years after the Lakers won their final NBA title in 1988 as part of the famed “Showtime” era of the franchise, Bryant channeled his inner Magic Johnson in 2002 by rocking Converse Weapons — the shoes the Hall of Fame point guard, and current president of basketball operations for the Lakers, wore in the 1980s. Flirting with another triple-double (14 points, 7 assists, 9 rebounds) against the Brooklyn Nets, Ball wore the Under Armour Curry 4 Finals PEs that two-time league MVP Curry unveiled en route to the Golden State Warriors winning their second NBA title in three years this summer. Because of a mild calf strain in his right leg, Ball was forced to sit out of the Lakers’ summer league championship matchup with the Portland Trail Blazers. But how dope would it have been if Ball had decided to wear a pair of Weapons, a la Magic and Kobe, and won the title? Too dope.

How dope would it have been if Ball had decided to wear a pair of Weapons, a la Magic and Kobe? 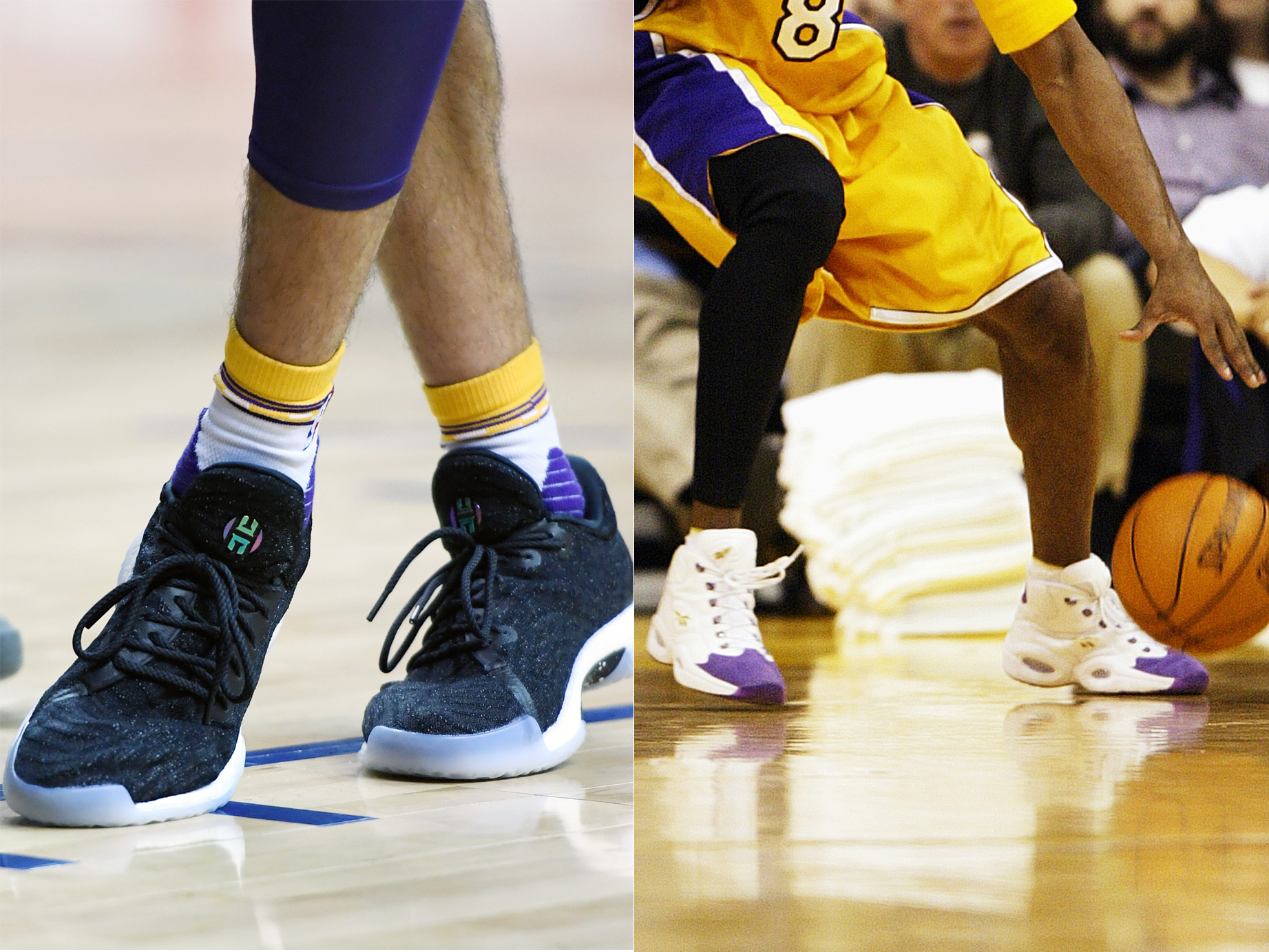 It has to be a little weird to wear the signature shoe of a fellow player. But that’s exactly what Bryant did during the 2002-03 NBA season, and Ball followed suit. Two seasons after the Lakers beat Allen Iverson and the Philadelphia 76ers in the 2001 NBA Finals, Bryant donned Iverson’s signature mid-top Reebok Questions in multiple variations of Lakers colors. Months removed from his first matchup with Harden and the Houston Rockets, Ball sported a pair of Adidas Harden LS “Night Life” shoes, dropping a triple-double (16 points, 12 assists, 10 rebounds) in a 94-83 Lakers summer league win over the Cleveland Cavaliers. 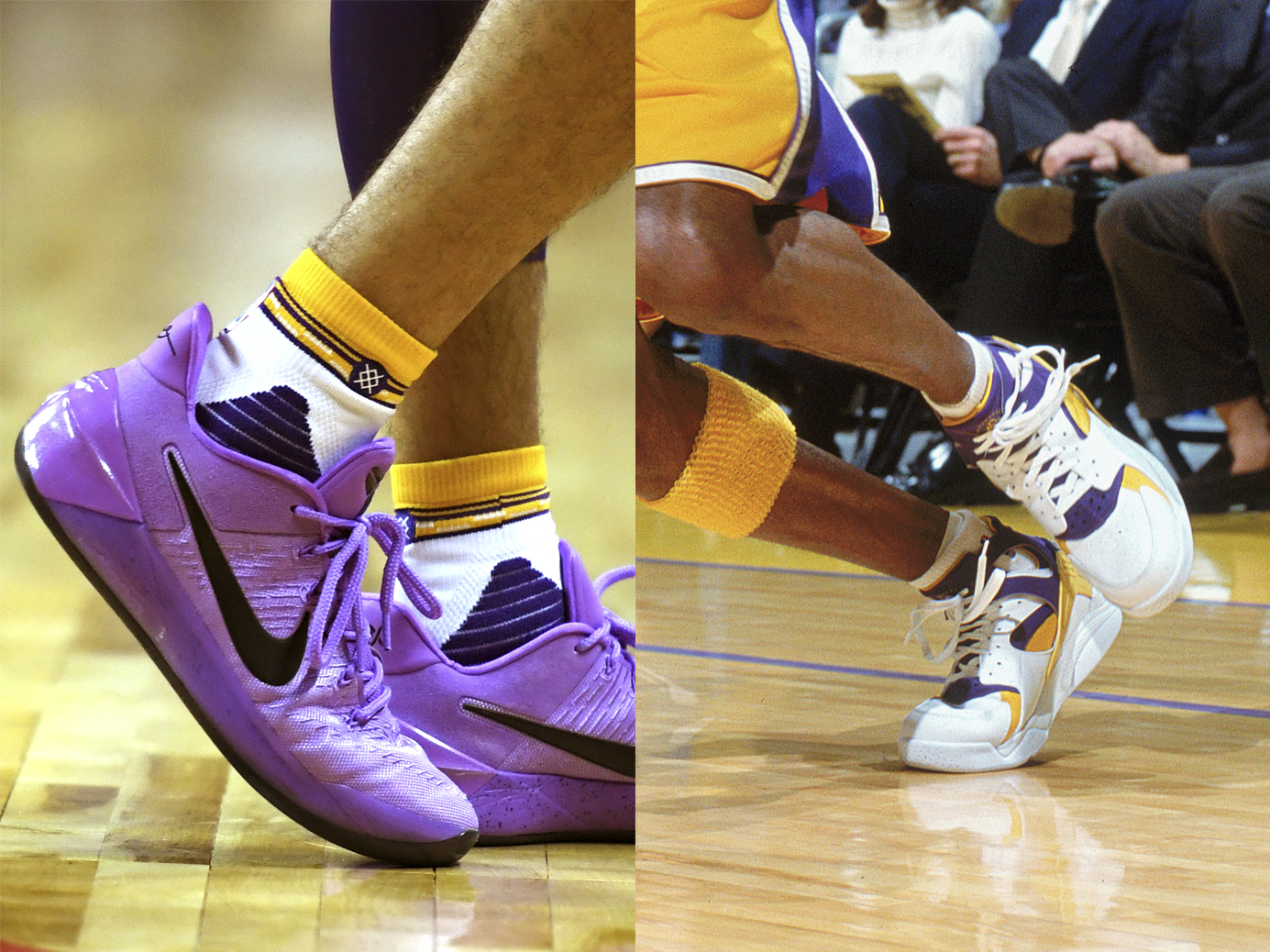 What made Ball ditch the ZO2s after two games for a pair of Bryant’s Nike Kobe ADs? “You know,” Ball said after he willed the Lakers to a 103-102 win over the Philadelphia 76ers, “Mamba mentality. Thought I’d switch it up.” The first brand Ball turned to when he decided to shake things up with his sneakers was Nike — the company Bryant signed with in June 2003 after a season testing out Nikes, most notably PE Nike Air Flight Huaraches. With a signature line of 14 shoes and counting, Bryant is one of the most iconic faces of Nike and will be for the foreseeable future.

But could the Black Mamba soon be joined at the brand by a Big Baller? If Ball bases his decision solely on the first performances of his young career, he’ll go with Nike, even if that means completely reshaping his father’s BBB vision and maybe even leaving the ZO2s in the past. Because in Kobes, Ball dazzled to the tune of 36 points, 11 assists, 8 rebounds and 5 steals — he did it in Showtime style, the way the Lakers hoped he would.