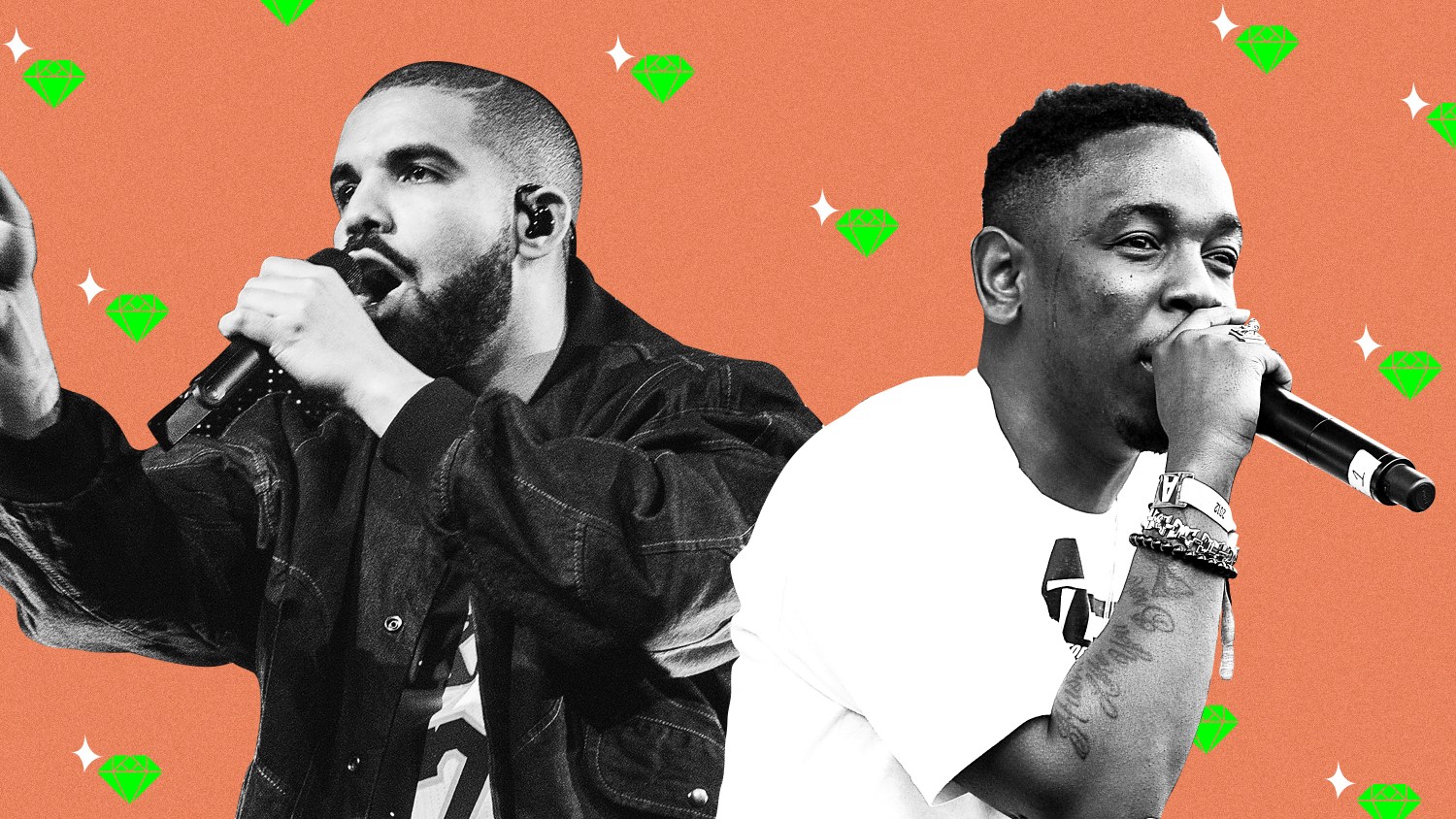 Kendrick Lamar, Drake and the definition of a ‘classic’ rap album

Sports have stats and championships — but how do you judge the GOAT in rap?

Four days after Drake released his highly anticipated playlist, More Life, Kendrick Lamar posted a cryptic message: a simple “IV.” This indicated that he is about to release new music — presumably a fourth studio album. The post is another passive-aggressive salvo in the two alpha dogs’ back-and-forth of subliminal disses in a competitive relationship dating to Lamar’s verse on Big Sean’s 2013 “Control,” in which the Compton, California, MC called out names, Drake’s among them, as rappers he wants to “murder” by simply outperforming them.

The subsequent release of “The Heart Pt. 4” was a scathing destruction of an unnamed opponent, and it also promised an April 7 release of a new Kendrick Lamar album, which was then officially moved to April 14. (But given the state of album releases, it could come out at 12:01 a.m. on April 14, but also at any other minute ever.) The album is called Damn., with the period, and meme-friendly album art has been posted across social channels. These moves are essentially Lamar challenging the record-breaking Drake, who is coming off his most successful year ever.

Unlike the oft-mentioned Take Care, GKMC stands as a capital-C Classic.

Some want to believe Lamar’s “The Heart” subliminals — I’ll Big Pun your punk a– — are directed at Detroit’s Big Sean, but Lamar rolled out his album right in the middle of Drake’s More Life media blitz. Fans of each artist will come up with their own criteria and reasons to back their respective favorites.

But Kendrick holds a one-up over Drake: He’s released at least one Classic Album, 2011’s good kid, m.A.A.d city. Unlike the oft-mentioned Take Care (2011), GKMC stands as a capital-C Classic because it’s a near-flawless, landmark masterpiece. And in rap, having that classic album means absolutely everything.

Rap is an ultracompetitive form of entertainment. MCs (or rappers) and their fans are forever trying to tout reasons that they or their fave should be considered the greatest. But it’s hard to truly figure out what makes one artist greater than another in a medium such as music, where there really is no one true quantitative measure of greatness. Yes, there are sales. Streaming numbers. Touring totals. There are Grammys and Forbes’ “richest rapper” lists. But there are plenty of songs and albums that have topped charts (looking at you, Flo-Rida) and won Grammys (sorry, Macklemore) that weren’t universally or even moderately praised by rap fans as moving the culture forward or presenting bodies of work that are undeniably great.

Though people continue to argue about stats and moments of greatness, the careers of Michael Jordan and LeBron James can be assessed based on championships. In the future, we’ll be able to straightforwardly assess the careers of soon-to-be top NBA draft picks Lonzo Ball and Markelle Fultz.

But there isn’t a comparable marker for deciding who is rap’s greatest of all time. As a result, rap artists (and journalists and fans) have tried to manufacture a measure for career greatness based on the idea of Classic, a word signifying a career-defining artistic achievement packed into one singular body of work. This is not particularly an album “judged over a period of time to be of the highest quality and outstanding of its kind,” but rather something judged by critics and people on social platforms in the immediate aftermath of its release to be perfect, or extremely close.

A rapper desiring to enter the conversation for all-time greatness must adhere to the criteria of having at least one classic under his or her respective belt. But the word “classic” is as loaded as it is indeterminate.

The idea of an immediate classic album is unique to rap music. Country music message boards aren’t ablaze with arguments over whether the new Kenny Chesney album is a classic or whether he has more classics than Garth Brooks. Whitney Houston and Mariah Carey’s musical competition wasn’t settled over who had more “classic” works (and it still rages).

But for rap, the idea of a classic — or perfect — album has been the standard since the early ’90s and can be largely credited to The Source magazine, which used to award rare and coveted five-mic ratings for albums it deemed to be universally lauded. In the early 2000s, 50 Cent tried to change the narrative that album quality determined an artist’s success during his feud with Ja Rule — he focused on album sales as the true sign of alpha rapper status. 50 was breaking sales records; his 2003 debut album Get Rich Or Die Trying sold 12 million copies in 2003 alone. In 2007 he even challenged Kanye West to a battle over album sales, not quality, that would determine who was rap’s poster boy. The publicity stunt landed them on the cover of Rolling Stone.

This is something judged — by critics, and via people on social platforms — in the immediate aftermath of its release to be perfect, or extremely close.

But chart success, which is based on an algorithm of sales plus on-demand streaming, doesn’t solely determine greatness. Otherwise, Flo-Rida and Nelly would be somewhere arguing over who’s the king of rap. Over the past year, it would be a battle between Migos, Future and Drake.

Drake occupies a unique space. He’s the king of rap, with chart success that has never been seen before. Ever. In any genre. More Life was streamed 90 million times on Apple music over the course of 24 hours. That’s close to a quarter of the population of the United States. Drake captivates millions with every release.

But Drake’s lack of a perfect project has put a dent in his resume. He’s even alluded to his 2016 Views failing to read as a Classic: “It wasn’t my biggest album by any means, it wasn’t the one to me.” This isn’t to say that he’s incapable of eventually producing that masterpiece, but he’s weighed down by that glaring absence. A classic album needs to occupy only one of two important corners that sound simple but are rarely reached: premium, unforgettable quality or a phenomenon that redefines the culture.

Drake’s albums have been good to great, but each album has a flaw that keeps it from reaching that pinnacle of artistic greatness. The album his fans tend to point to as a Classic is Take Care. There are threads and such devoted to this debate. But the truth is, Care is far too long (18 tracks totaling more than 80 minutes) and has too many lulls toward the end to maintain the “classic” moniker. Drake, however, may be the one rapper who can subvert the idea of needing a classic album simply because of the fact that he’s released so many incredibly classic songs.

There are plenty of albums that fall into the category of “classic.” These albums elevate the genre in terms of next-level lyricism, flawless production and careful sequencing. They can go platinum or be underground successes that appeal to a small group of superfans. Think Blu & Exile’s 2007 Below The Heavens, an endless maelstrom of lyrical wit — “never was the fastest in class but if you put me on the track I was guaranteed to run” — and Recession-era angst that remains championship-worthy 10 years later.

Albums stand as classics if they leave an indelible cultural mark on hip-hop. These albums redirect the trajectory of the genre, and because they do, there can be room for flaws in the final product. DMX’s 1998 debut, It’s Dark And Hell Is Hot, single-handedly made Earl Simmons a household name while also taking rap out of its post-Biggie/Tupac era of shiny suits and flashy ’80s samples. The album is a horror film set to wax, and it influenced a whole generation of rappers, such as J. Cole and Kendrick Lamar, to be more open about their mental health.

The only other rap projects that are undeniable Classics are Kanye West’s 2010 My Beautiful Dark Twisted Fantasy and Chance The Rapper’s 2013 Acid Rap.

Tupac never had a flawless album from a lyrical standpoint, but it’s hard to argue against an album like 1996’s All Eyez On Me being a classic. It resonates deeply 20 years later, with Shakur becoming the first solo rapper inducted into the Rock & Roll Hall of Fame. Regional albums such as Crooked Lettaz’s 1999 Grey Skies is near scripture in Jackson, Mississippi. The same goes for UGK’s 1996 Ridin’ Dirty in Houston. If an album can become legendary in its hometown, its classic status is cemented whether the rest of the country catches on or not.

However, the all-time classics that land rappers in the Mount Rushmore conversation can be played through without skipping a track. Concurrently, the album is also about the business of creating culturally transcendent moments. Jay Z’s 2001 The Blueprint is flawless from beginning to end while popularizing the soul-sampling majesty of young Kanye West and producer Just Blaze. Also, the album dropped on Sept. 11, 2001, indelibly linking it to an unforgettable moment in American history.

Nas’ 1994 Illmatic is 10 tracks of rapping that redefined lyricism and internal rhyme backed by super producers such as Q-Tip and Pete Rock. The album, along with Biggie’s 1994 Ready To Die, painted pictures of New York City street life better than any movie could. OutKast’s 1998 Aquemini is simply the best album of all time (don’t @ me). It painted such a vivid picture of Southern life that it has influenced every rapper below the Mason-Dixon Line for the past 20 years.

That brings me to the biggest dilemma in determining a classic: time. There are two time markers that determine an album’s classic status. For example, Kendrick Lamar’s good kid, m.A.A.d city felt like a classic immediately. In the social media era we share music experiences, and Lamar’s masterpiece was crowned from the moment download links hit Twitter. If you have to ask about or debate an album’s status as a classic for too long, it shouldn’t be considered. Over the past decade, the only other rap projects that are undeniable Classics are Kanye West’s 2010 My Beautiful Dark Twisted Fantasy and Chance The Rapper’s 2013 Acid Rap.

For rappers, creating a Classic album is their NBA championship.

But this is where it gets complicated, as there are so many albums whose impacts aren’t noticed until years later, when new generations of MCs reveal that they are influenced by them. Maybe an album flew under the radar until younger artists all replicated the music. Kanye West’s 808s & Heartbreak was criticized for its use of Auto-tune and deviation from West’s more pure hip-hop beginnings. But the whole world sounds like 808s now, from the Uzi Verts to Yachtys. So 808s deserves consideration as a classic — especially since it’s endlessly replayable. But these instances are rare. The best bet is to create something that’s instantly impactful.

For rappers, creating a Classic album is their NBA championship. Drake is making a case for Classic songs and seems to even be subverting the idea of an album by calling his current project a playlist. For Lamar, building a catalog of classic albums inches him closer to being one of the all-time greats and backs up his claims that other MCs should be “Humble” in his presence. One problem with chasing that prize is that the distinction is ever-changing and ungraspable. Understanding what a Classic is, for creators and for fans, is like grabbing at a handful of smoke.