Kamaiyah’s 2016 ‘A Good Night in the Ghetto’ cover may be simple, but it speaks volumes

When artists introduce themselves to the world, they’re generally front and center, placing emphasis on themselves. But when it was time for Kamaiyah to step into the limelight, she turned her back to the camera, a bottle of Hennessy and a bag of Lay’s potato chips in the air, and instead gave the moment to her friends. While her sound has garnered plenty of accolades, it may be her image that pushes the Oakland, California, rapper toward transcendence. The cover image of her recent debut may seem simple enough, but it’s all part of a well-planned and thoughtful curation of self that harkens back to the civil rights era, and is rooted in empowerment of women and femininity in a world where they are objectified, belittled and oversexualized to the point of saturation.

One of the most talked-about pieces of the black experience last year was Issa Rae’s stunning, brutally honest and marvelous HBO series Insecure. The show incorporates a modern cascade of mood-setting songs, going so far as to hire Solange Knowles as a music consultant to help curate the show’s sonic thumbprint. For the season finale, Rae and series music supervisor Kier Lehman leaned on the sounds of the 24-year-old from Oakland. Kamaiyah has a distinct voice and a decidedly retro aesthetic — a unique synthesis of Bay Area hyphy and the most glorious of ’90s hip-hop and R&B.

When Molly hopped into bed with a younger man for a one-night stand, mostly to spite her best friend, Issa, it was to the sounds of Kamaiyah’s “Nxggas.” A raunchy track with a thudding bassline from her March 2016 debut mixtape A Good Night In The Ghetto, Kamaiyah channels fellow Oakland native Too $hort and adds a dash of DMX, running through promiscuous romps with X-rated and affable charm. The song is sultry and perfectly exemplifies the moment but also the series as a whole. Molly had taken charge of her sex life, and — as often is the case with men in similar situations — that is not only OK by the series’ standards, but it is encouraged, a moment of triumph. It’s a brand of gender equality rarely seen on television, let alone one featuring a black woman.

“The main thing that Bay Area women, specifically Oakland women, have, is a drive. We just have crazy drive, crazy hustle.” — Electric Blue

Rae gushed about the song on Twitter, and shouted out Insecure’s executive producer Melina Matsoukas for introducing her to it. Lehman revealed “it was one of the hardest [songs] to clear all season but well worth it.” And Kamaiyah? Well, she reacted how all millennials do to incredible, even life-altering news: She posted a celebratory meme on Twitter. 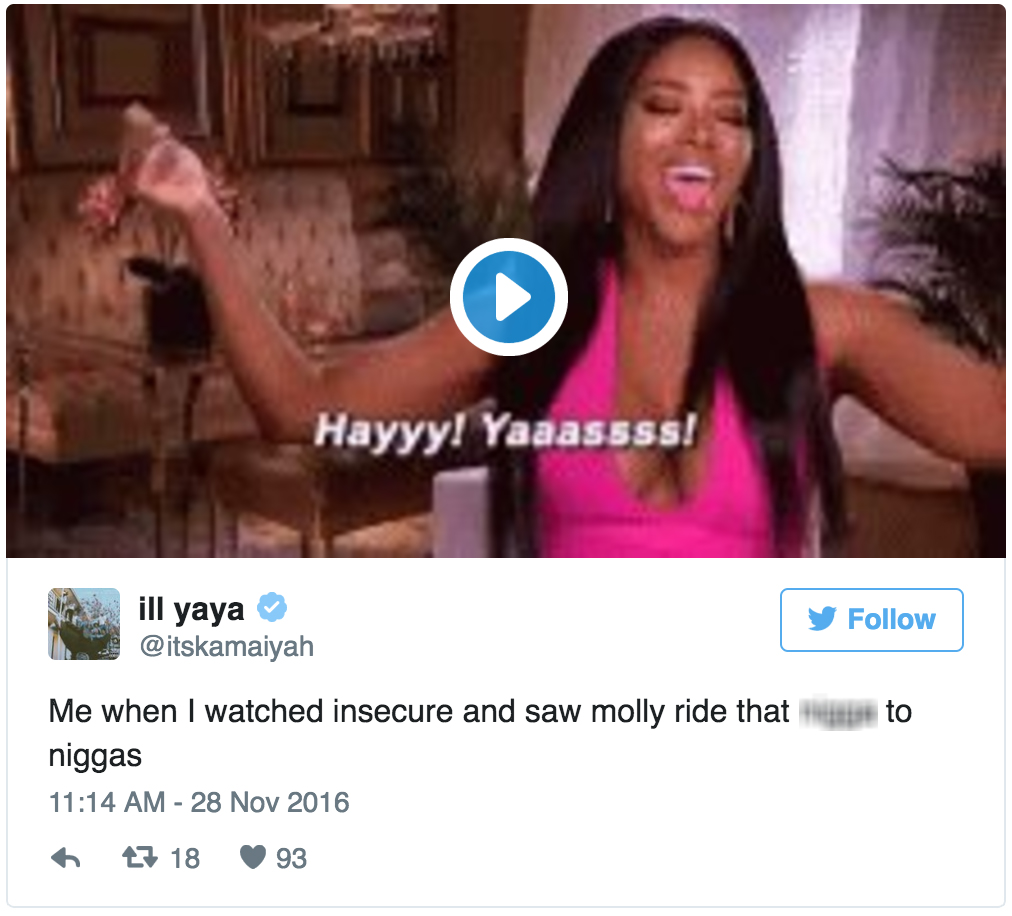 This very everywoman sensibility is the appeal of Kamaiyah Jamesha Johnson. As she’s rocketed up Album of the Year lists, bumped shoulders with rap superstars and watched her voice creep up Billboard charts, Kamaiyah still remains herself — normal, graceful and authentic, and because of that she just might be rap’s next female superstar.

Born and raised on High Street in East Oakland, Kamaiyah bounced between foster homes and her grandmother’s house as a child, as a result of an absent mother and a drug-addicted father, according to a November interview. She also revealed that she decided she wanted to rap after watching Bow Wow. “ ‘He’s a kid, I’m a kid — if he could do it, then I can too.’ I just wrote it for myself, and I never stopped.”

Her music oozes a certain affinity for the ’90s. Her fashion sense harkens to the heydays of TLC and Aaliyah. Kamaiyah favors oversized T-shirts, sometimes adorned with airbrushed cartoon characters. She carries around a fully functioning brick cellphone, a trinket that has become her de-facto logo. Her hair is braided into singles, cut to just below the chin. She wears very little makeup. Aesthetically she’s closer to Missy Elliot than Nicki Minaj. “I had all brothers and I grew up in foster homes,” she said last March. “So I would just take big-a– T-shirts and throw them on. That’s what I’m used to.”

Kamaiyah broke through online with her bubbly single “How Does It Feel,” a celebratory anthem of normalcy, of creeping just over the poverty line and living. Not living extravagantly, but simply living. “I done worked all my life,” she croons on the chorus before asking “Now I wonder, how does it feel to just live?” Her uncanny ear for production fuses a retro feel with bouncy, Bay Area hyphy-esque energy. Her mastery of melody and harmony, her ability to splice together intricate rhyme patterns both at the end of bars, and within bars, and her genuine and relatable personality are on display as well. The single found its way onto radio, A Good Night in the Ghetto debuted, and a label deal with Interscope records ensued.

The cover of A Good Night In The Ghetto seems simple, but it’s the result of hard work from a pair of Oakland natives and direct influence of Kamaiyah herself. Oakland photographer Mancy Gant was commissioned to shoot the cover after famed Bay Area producer Trackademicks — renowned for helping shape the sound of the hyphy movement in the mid-2000s — introduced him to Kamaiyah’s manager, Francois Wiley. “I went over to her close friend James’ house, who passed away from cancer this year, and we shot it at his house,” said Gant, 26. “We wanted to get the dusky, sunset kind of look. Kind of like it’s bleeding into the night. To make it feel like it was a party in the daytime that’s gradually going into the nighttime.”

“We wanted to get the dusky, sunset kind of look. Kind of like it’s bleeding into the night. To make it feel like it was a party in the daytime that’s gradually going into the nighttime.” — Mancy Gant

The jovial shoot lasted for a few hours last February. “Everybody was there — her aunts, her friends … It was a family affair,” said Gant. It was a carefree, partylike gathering, but the inspiration for the cover has deep roots.

“Kamaiyah was hands on about the idea of it,” Gant continued. “I was there to give my input and execute the idea … she described to me.” The image, and the title of the mixtape, was inspired by “A Great Day In Harlem,” a historic image of 57 famed Harlem jazz musicians — Dizzy Gillespie, Count Basie, Thelonious Monk and more, taken by Art Kane in 1958 for Esquire magazine. The image was eventually the subject of an Oscar-nominated documentary of the same name in 1995, and spawned innumerable “A Great Day In …” homages covering many genres, cities and mediums.

In 1998, XXL magazine commissioned legendary photojournalist and director of Shaft Gordon Parks for its own homage, “A Great Day In Hip-Hop,” featuring more than 200 artists assembled at the same building at 17 E. 126th St. in Harlem. Legends such as Rakim, Kool Herc, and Fab 5 Freddy were joined by then new-school additions such as the Wu-Tang Clan, A Tribe Called Quest, E-40, Xzibit, The Roots and many more. “Gordon Parks is one of my favorite photographers,” said Gant, “someone I learned about when I first started shooting.”

There were alternate versions of the cover. “I made a bunch of mock-up edits,” said Gant. “I edited a few color ones, different options also … We landed on that photo and then we cropped it.”

She carries around a fully functioning brick cellphone, a trinket that has become her de-facto logo.

The shot was passed on to Oakland native and designer Electric Blue, 27. “I just went about the editing,” said Blue. “And figuring out the fonts, and pretty much designing it and bringing it together … We wanted to make it look like a ’90s kind of cover, just because it seems like a lot of album artwork isn’t about the artwork anymore … an old California, West coast, gangsta rap kind of cover.”

Kamaiyah, full-figured, fully dressed and dark-skinned, is a stark contrast to what is portrayed as the ideal image of a woman in mainstream media and on social media platforms. She’s beautiful and sexy in a human and realistic way. She’s attractive for her confidence, and her presence. So although she says she “doesn’t care” about image and perception, it’s her image that makes a lasting impression.

“I think with female rappers you have them completely oversexualized,” said Blue. “There’s nothing wrong with that, however you want to empower yourself do it, but it’s easy to get distracted from talent with that.”

But that’s not to say Kamaiyah isn’t sexy, even if she isn’t the “ideal” aesthetic of a woman in hip-hop. “Kamaiyah is changing the definition of what it means to be sexy for a woman,” said Shay Diddy, 25. She’s the nighttime DJ of the Bay Area’s flagship hip-hop station, KMEL. She’s been a supporter of Kamaiyah from the beginning. “She is sexy, but she don’t flaunt it for everybody.” Kamaiyah and the image she projects embodies Oakland through and through. “I see so many different funny tweets and memes about Bay Area women,” said Blue. “There’s so many layers to us, and we come in so many different forms. The main thing that Bay Area women, specifically Oakland women, have, is a drive. We just have crazy drive, crazy hustle.”

“[Kamaiyah] exemplifies something that is probably not known [about] Oakland very much,” added Gant. “The women here are very strong, vocal and independent. They’re ahead of many people in certain ways, just their way of thinking and carrying themselves. They move on their own, and they kind of lead what we do here. We’ve always had really strong women here.”