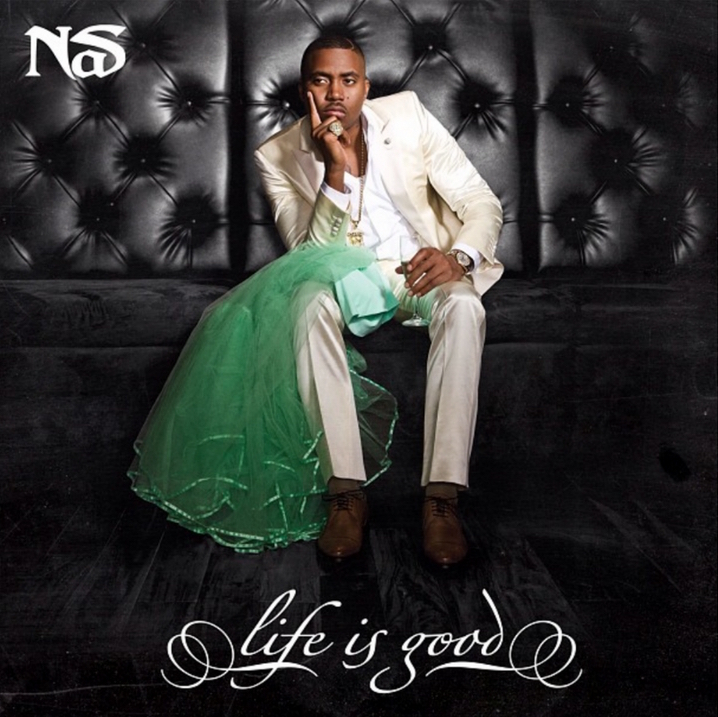 Love is the most lethal drug available. Although technically free, indulging is a high-risk, high-reward gamble. It propels you to a euphoric peak, then pushes you from the top of that mountain when it’s over. But the fall doesn’t kill you. You survive to endure the pain. Epiphanies about the laws of attraction arise during your recovery: The same things that lure you to someone can also repel you.

“Love is a beast,” Nas said during a March 2012 interview. “If you’re not a warrior, if you’re not ready, love will sneak up on you and break you down.” You can be a warrior — a braveheart, even — and still be disarmed by love. It can leave anyone haunted by tokens of their failed union. Kelis Rogers’ green wedding dress became that artifact for Nasir Jones. Baring his soul and offering an update on his status, the legend shared it with the world on the cover of his 2012 album, Life Is Good.

They met at a party that Sean “Diddy” Combs threw for the 2002 MTV Video Music Awards, and Nas and Kelis walked down the aisle in January 2005. By April 2009, Kelis, pregnant with their son, filed for divorce. When she moved out of their home, the only thing she left behind was a piece of her wedding dress — a final, serrated parting shot that preceded Lawrence leaving that Best Buy polo in Issa’s closet on Insecure.

The dissolution of Nas and Kelis’ marriage triggered the nadir of Nas: the 2010 court-mandated spousal and child support payments, the hefty tax lien in 2011 and, to top it all off, in 2012 he was dragged into a kidnapping scandal after not showing up for a New Year’s Eve concert in Angola. Each drama added to the “Nas lost” narrative that has brewed since his third album, I Am …, was bootlegged in 1999. But he’d always guarded his personal life. In 2012, though, these embarrassing particulars inspired his most focused work in years.

Life Is Good is a memoir — a retrospective from hip-hop’s most naturally gifted lyricist. Nas looked back on his life and career, but he also examined the present. Divorce and financial woes aside, he was also adjusting to fatherhood — raising a small child while his oldest transitioned to adulthood: These are the themes of Daughters. He considers the possibility of new love in Cherry Wine, all while reveling in his position as one of rap’s greats in The Don. And with Life Is Good’s cover art, Nas found a brilliant way to own his mistakes without letting them define him.

Any marriage can end in divorce, and the fetishization of celebrity turns private matters into those of public interest. Celebrities are exalted as gods — until they’re seen in human situations. The internet was ablaze when Jay Z, Nas’ former rival and the God MC himself, knelt for forgiveness at the altar of Beyoncé in Lemonade’s visual treatment. Hip-hop is a male-dominated avenue, and men are conditioned to swallow their pain rather than expose the cracks in their facades of invincibility. With Life Is Good’s cover — specifically, with Kelis’ dress — Nas turned his pain into art.

“I found it in my house and thought, it’s going somewhere! Either on the cover of my album, or burning in a garbage can,” he jokingly told The Guardian just before the album’s release. “I was angry when I first found it. Hurt and angry — but I don’t think she left it deliberately to hurt me. It’s just part of the dress, so I don’t know where the rest of it is. But it made all the sense in the world for me to … hold on to that.”

Matthew Salacuse grew up a hip-hop fan in Brooklyn, New York, finishing up college as the genre exploded during the late 1990s. Combining his passions, he spent the first decade of his career as a photographer of hip-hop artists. “My pal Alex Haldi was at Island Def Jam as an art director, and he was handed the plum job of designing Life Is Good for Nas,” said Salacuse, who now works in editorial and advertising photography in New York, shooting the likes of Rihanna, Andy Samberg and Wiz Khalifa. “We’d been waiting for the perfect project to work together on, and this was it.”

“Nas and I sat and watched footage from his wedding day.” — Aristotle Torres

The original concept was a celebration. Not a divorce party, per se, but something that visually conveyed Nas in a good place, all things considered. “We — the art directors and Nas’ people — conceptualized a grandiose cover with shimmering lights on Mylar and fireworks, and girls in short shorts,” Salacuse said. “I had producers working around the clock to get all these things on short notice, and the night before the shoot I get a call at 9 p.m. that says, ‘Please hold for Nas.’ ” The conversation rerouted the art direction for Life Is Good, with Nas delivering six words that could double as his reason for the marital split. “I had a change of heart,” is what Salacuse recalls Nas saying. “I was still pretty silent on the other end of the phone, but he continued: ‘Have you ever heard Marvin Gaye’s Here, My Dear’?”

Salacuse had, but was in awe. As he continued to process the moment, Nas said, “I want to do something with that vibe.” Gaye’s 1978 album was recorded after the singer’s divorce was finalized and he agreed to pay half of its royalties to his first wife, Anna Gordy Gaye. “He said that Marvin made that album for his wife as a way to work through his divorce,” Salacuse said. “Then he said he had a new concept for the cover that was just him in a tux, sitting with his wife’s wedding dress. It was genius. This whole time, I thought Life Is Good was about living the good life, but in actuality, Nas was hurting and it was melancholic sarcasm.”

Some things you can’t plan. “There were times when I was thinking, ‘Damn. I had this s— all planned out, and now I’ve failed,’ ” Nas told Complex. “That was hard on me, because I don’t like to fail at anything. Accepting that I failed at this relationship — and it was public — messed me up. You ask yourself, ‘How could that person be so cold?’ And I’m sure she felt the same way about me. It was ugly.”

From that ugliness, he was able to extract something beautiful. The artwork was shot in two locations during November 2011: A Long Island City, Queens, New York, bar near the Queensbridge Housing Projects where Nas grew up, and New York City’s Gramercy Park Hotel. “He was all business,” Salacuse said. And when the dress was unveiled, the weight of the moment dawned on the veteran photographer (Kelis has said that green fabric on the cover was not the gown itself, but a petticoat from within the gown). “I’d never actually seen the dress, so when he took it out of a garment bag on set, I was pretty surprised at it’s color and design,” he said. “I knew we were about to make something classic.”

Vivid imagery has long been Nas’ forte. Every solo album, from 1994’s Illmatic to his provocative untitled 2008 effort, features images that relay his state of mind. Illmatic has a young, nappy-headed Nas — a symbol of the moment he became aware of the surroundings that shaped him. Life Is Good features the man who the little boy became.

“I thought Life Is Good was about living the good life, but in actuality, Nas was hurting, and it was melancholic sarcasm.” — Matthew Salacuse

“I wanna be the one, like Earth Wind & Fire and Iron Maiden … album covers that just really stand out,” Nas told MTV. “I want to be the guy with the best album cover story.” He should be up for consideration, because Life Is Good’s cover was powerful enough to bleed into other mediums. The video for Bye Baby, the album’s final song and his summation of his and Kelis’ relationship, revisits the moment Nas discovered her wedding gown. Filmmaker Aristotle Torres, who got the job after directing the video for The Don, reconstructed the scene in a Hollywood Hills mansion.

“I wanted an anchor performance to work with, as we only had one day to shoot,” Torres said. “I enjoyed the idea of having this long dolly shot pull out to reveal the cover at the end.” In the video’s final moments, Nas stands up, places Kelis’ dress on the couch and walks away. “There was this great moment early in the day, Nas and I sat and watched footage from his wedding day,” Torres said. “That conversation sparked a bunch of new ideas, and that was one of the them.”

Life Is Good is about accepting the past and enjoying the present with eyes toward the future. With help from a talented creative brain trust, Nas was able to communicate that through both still and moving image.

Next go ’round / I hope I pick the truest type / And watch me do it all again, it’s a beautiful life are among the final words Nas utters on the album. There’s hope for the future.

Julian Kimble is a Howard University-educated writer who has also written for The Washington Post, Billboard, Complex, MTV News, Pitchfork, and Gawker, to name a few. His range is unlimited.