The Drew League leaves Nike for partnership with Adidas

A year before its 50th anniversary season, one of the most recognized summer basketball pro-am associations, Los Angeles’ Drew League, is switching its key brand partner.

Nike began to officially partner with the league in 2013, after a surge in attendance that coincided with the NBA lockout during the summer of 2011.

That season, players such as Baron Davis, Kobe Bryant, Kevin Durant and LeBron James participated in summer season games at the South LA park, providing fans with the opportunity to see some of the world’s greatest players up close, for free.

Ever since, NBA players have frequently played in the summer weekend games, competing against Division I collegiate players, overseas pros back home, rising high school stars and local players. 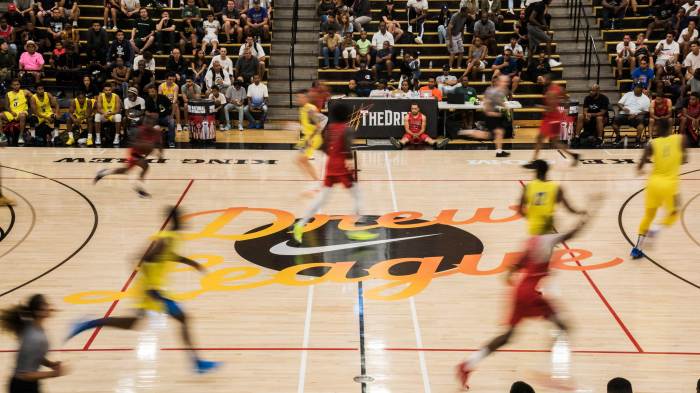 “We were in a comfort zone with Nike for the past several years, and everything was fine,” said Dino Smiley, a longtime LA County Parks and Recreation supervisor, who has served as commissioner of the Drew League since 1985 and CEO of the Drew League Foundation since its formation in 2009.

“With some of our legends and some of our main players, what made it great was they said to me, ‘Hey, man, it’s about Drew,’ ” Smiley said of the decision to switch brands. “Nike took us to another level, and Adidas should take us even further.”

Along with his wife Stephanie, daughter Chaniel and other leaders from the community, the Smiley family has operated the Drew League for more than 30 years, hosting games for the past decade at King/Drew Magnet High School in the Watts neighborhood of Los Angeles.

“We’ve been in the community pretty much all of our life,” Smiley said. “We noticed that with Adidas, they were supporting quite a few inner-city programs, and we were really intrigued by it.”

During 2020’s NBA All-Star Weekend in Chicago, Adidas Basketball launched a program dubbed “Legacy” in Los Angeles, New York and Chicago. The initiative extended a brand sponsorship to 10 high schools in each city, which were chosen not on their basketball team rankings, but on need.

The support for boys and girls’ basketball squads across 30 high schools reached more than 800 players, and included resources both on and off the court. The 2020 Legacy program’s basketball teams were comprised of 98% students of color.

A key pillar of the program has been its career day activations, showcasing opportunities in the sports, entertainment, music and athletic industries that the brand is so frequently connected to.

King/Drew Magnet High School — where the league has hosted games since expanding from a nearby middle school in 2013 to meet fan attendance demands — is one of the 10 LA-area high schools included in the Adidas Legacy program.

Smiley said Adidas’ approach to supporting schools impressed him — especially since brands typically choose to sponsor sports programs based on their powerhouse stature or their ability to recruit star players with NBA potential. Moreover, the trend of plucking top inner-city players out of their neighborhoods to play at private academies in affluent areas or in paid elite leagues has left many schools without the shoe-company funding that had become commonplace for programs during the 2000s.

“When Adidas came in, we said, ‘Wow. They’re outfitting kids, they’re supporting kids’ programs and doing things in the community that were outstanding,’ ” Smiley said.

The annual sponsorship of the Drew League includes providing official home and away uniforms for each of the nearly two dozen teams and commercial retail opportunities around Drew League-branded footwear and apparel. Adidas and the Drew League are also mapping out a series of community camps, workshops and activations.

The organization’s Jr-Drew program will continue to host skills camps for kids, while also building out an infrastructure of mentorships and internships for local students through the Drew League Foundation.

“When you think of basketball as a culture and community, it’s evident the Drew League is it,” said ReeCee Hollans, Adidas’ head of global grassroots basketball. “For me, if the opportunity was to ever present itself, I said, ‘Let’s try to align ourselves with one of the most recognizable basketball spaces, definitely in North America, but also in the world.’ ”

As the conversations began to pick up after the conclusion of last summer’s season, one key point of emphasis for Adidas was providing the team behind the Drew League with creative control.

“[We asked them], ‘How do you see your league looking? What stories do you want us to tell?’ ” said Hollans. “Just [making sure they’re] completely involved. ‘What color do you want? What do you want to say on it?’ ”

For the first season of the partnership, each team in the league will don pinstriped jerseys in both home and away looks, with three-striped collar piping and an Adidas-branded neckline design. An official Drew League crest highlights the league’s 1973 starting point.

“It was big time,” Smiley said of the ability to design the jerseys. “We felt like even though it was our league [before], we didn’t have control over [the look]. The way this is being handled, and the input on the floor design and doing things on social media, is fantastic. They have such a creative team and they involve us in everything that they want to do.”

In addition to the new uniform designs for this season, the two sides are working on special edition uniforms for next summer’s 50th anniversary season. The Drew League is also expected to release several branded sneakers with Adidas this year and in the future, likely including Harden’s signature series and the namesake models of other current and past Adidas endorsers.

Over the years, several Adidas athletes have shown up to play at Drew League games, perhaps none more consistently than Harden. Then a Nike endorser, Harden played in one of the greatest games in Drew League history, dropping 47 points in a special exhibition game to close out the 2011 season that featured DeMar DeRozan and Bryant. In the game, Bryant faced off against Harden and went on to drain a game winner at the buzzer from the right elbow, capping off an instant-classic 45-point performance that was one of the highlights of the lockout.

Other Adidas athletes such as Evan Mobley and Onyeka Okongwu have also played in Drew League games.

“A lot of these guys are already familiar, have grown up watching and have also played in the league,” said Hollans. “It’s an organic alignment. It’s not something that we’re going to push on guys. This is where they already play.”

After Adidas signed Harden, an LA native, to a 13-year endorsement deal in 2015, it didn’t take the then-Houston Rockets star long to brainstorm ways in which he and his new brand partner could connect with the Drew League. 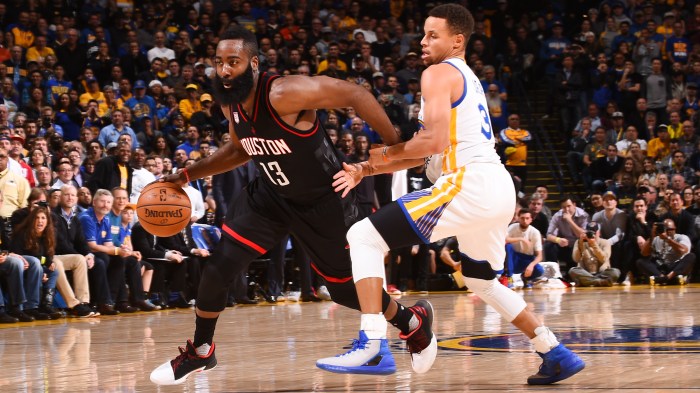 “He will always seek me out, give me a hug and we’ll talk,” said Smiley. He recalled one evening in 2017 when the Rockets were on the road playing the Golden State Warriors on national TV. “Around 11 at night, I get a phone call and I didn’t recognize the number.”

“This is James,” said the caller.

“James who?” asked Smiley, before connecting the dots. “James! You just finished playing 45 minutes ago – what’re you doing calling me?”

Harden phoned with a specific mission in mind.

“What will it take for Adidas to be the sponsor of the Drew League? We gotta go Adidas,” Smiley recalled Harden telling him.

It would take five years for the brand and league to join forces, though Harden would be involved in another of the league’s classic moments that summer. A month after the Rockets traded for Chris Paul, Harden and Paul played for LAUNFD (LA Unified) on the final weekend of the Drew League’s regular season, taking the court together for the first time before the NBA season began.

“It all took place at King Drew, and the people that were there, it was box office,” said Smiley of Harden and Paul’s link-up. “We were the first to see what they looked like in the backcourt together.”

As the new season gets underway soon, both sides are looking to make the impact of their new partnership felt for the players, the fans in attendance and the surrounding community, making it an atmosphere that people love coming back to each summer.