The singer is evolving from soul man to R&B artist, but will Black audiences join him?

Leon Bridges is over the “vintage soul” label. The singer’s first two outings, 2015’s Coming Home and 2018’s Good Thing, were critically praised, Grammy-nominated (Grammy-winning for Good Thing) and cemented him as a formidable talent. But they also placed him in a niche category — a retro soul artist channeling crooners of the ’50s and ’60s like Sam Cooke and Otis Redding.

Gold-Diggers Sound, Bridges’ third studio album, is named after the East Los Angeles studio/speak-easy/boutique hotel hybrid that the 32-year-old artist claimed as both home and work base for roughly two years while completing the project. His goal was to tap into a different creative energy to produce something different from his previous two offerings. Recalling the Soulquarians’ 1998 takeover of Jimi Hendrix’s Electric Lady Studios in New York to record D’Angelo’s Voodoo, the location helped drive the feel of the album.

Bridges flipped his normal working schedule from day to night. People came through the studio to hang out instead of him going out to party. And he, his collaborators (including Ricky Reed and Nate Mercereau, who also co-produced Good Thing) and musicians worked through the songs during sessions instead of recording music that had already been written. The result is a less perfect work than Bridges’ other projects, but a stellar R&B album. It’s music you can throw on in the crib and live with.

This is the Bridges we heard on features released during the pandemic such as John Mayer’s “Inside Friend” and Lucky Daye’s “All About You.” The retro influence hasn’t been discarded, but Gold-Diggers Sound is in the neo soul pocket, invoking ’70s soul and funk and pulling in elements of progressive jazz with assists from Robert Glasper, Keyon Harrold and Terrace Martin. This album brings D’Angelo, Maxwell, Frank Ocean and Miguel to mind, and boasts joints that can live on urban mainstream radio alongside acts such as Daye and Silk Sonic. Usually, declaring that an artist has moved in a more contemporary direction suggests a switch to a formulaic sound. In this case, it means the opposite: This Bridges is less structured than we’ve previously heard. More natural, more vibey.

Gold-Diggers Sound clocks in at a tight 36 minutes, 46 seconds with 11 tracks (39 minutes, 30 seconds for the deluxe LP, which includes the short but incredible “Summer Rain” featuring Jazmine Sullivan). From the Glasper-produced opener, “Born Again,” it’s clear this will be a new experience for listeners. “Born Again” is a spiritual declaration of renewal from Bridges. But it’s not heavy-handed. Following what used to be a standard R&B practice, Bridges leaves room for listeners to apply secular meaning to lyrics like, “When all else fails, your love will last forever.”

“Motorbike,” the album’s first single, and “Steam” are standard songs of infatuation and adoration, but “Magnolias,” “Details” and “Sho Nuff” take the album in a sensual and sultry direction. “Sexy” hasn’t been a word often associated with Bridges, who has been cautious with that subject matter in the past because of his faith. With lyrics such as, “​​Tell me how you like it/I just wanna try it/Tease me but provide it/You got me excited,” that might change after this LP. On the flip side, “Why Don’t You Touch Me” explores a topic we usually hear from women: feeling undesirable to your partner. Bridges’ willingness to be vulnerable is part of his strength as a songwriter in contemporary R&B. There’s no shortage of songs in which men apologize for not being able to give their partners enough attention, but how often do we hear men telling their partner, “I’m dressing to the nines and your eye’s straying … It’s been so hard to stay close/If there’s a problem, say so”?

Gold-Diggers Sound also gets into a new topical area for Bridges: social commentary. Bridges and Martin completed “Sweeter” in 2019 and intended to hold it for the album, but in 2020, the police murder of George Floyd, which followed the murder of Ahmaud Arbery in Georgia, compelled Bridges to release it as a response to their deaths. The track is crafted from the perspective of a Black victim of racial violence as they lay dying, and is almost subtle in its pain. It doesn’t have a gospel feel or a big arrangement. It’s not anthemic. If you didn’t listen to the lyrics closely, you might think it was about a romantic heartbreak, which makes it even more poignant, because it is about the heartbreak of hopelessness. 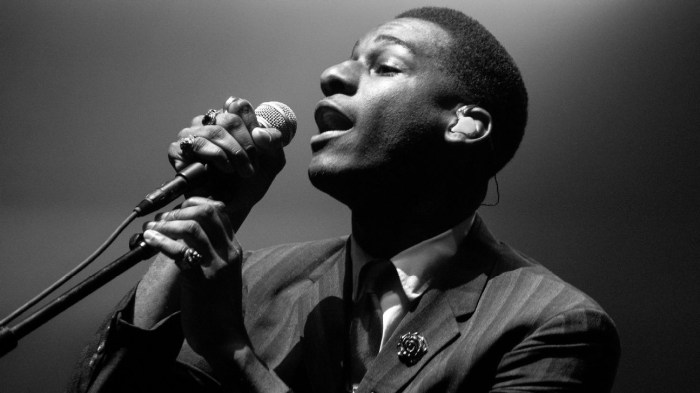 The Southern soul that propelled Bridges to stardom is still prevalent in the two closing tracks on the standard edition of the LP. “Don’t Worry” is about love that’s gone, still craved, but no good. “Shut you out, you know I tried/Said I got over you but I lied/Morning love and morning fights/I miss it all.” The beautifully orchestrated “Blue Mesas” is poignant if troubling close, in which Bridges ponders the loneliness that accompanies his success: “Killing myself, saying these words/There’s a hurting deep down in my soul/but I learned not to let it show.” It’s an ellipsis at the end of the album, a problem without a resolution.

Critical acclaim is an enviable achievement for a recording artist, but Bridges experienced a challenge that’s unfortunately common for Black artists who are mainstream critical darlings: He felt pigeonholed musically and excluded from Black music conversations. Proving his point, some critics lamented that Gold-Diggers Sound is too restrained, too safe and not a full use of Bridges’ capability. The singer has explained, however, that this is the album closest to who he is right now. “I’m sending the message that I can make whatever I want to make. The pool of inspiration is communal,” he told WBUR around the album’s release. “And so this album is just about being honest about all those things that inspire me.”

Naima Cochrane is a former music executive and Black music and culture writer in New York City. Since 2017, she's connected urban music's past and present through her #MusicSermon storytelling series on Twitter. You can find Naima in the snack aisle of grocery stores dancing to 90s R&B.