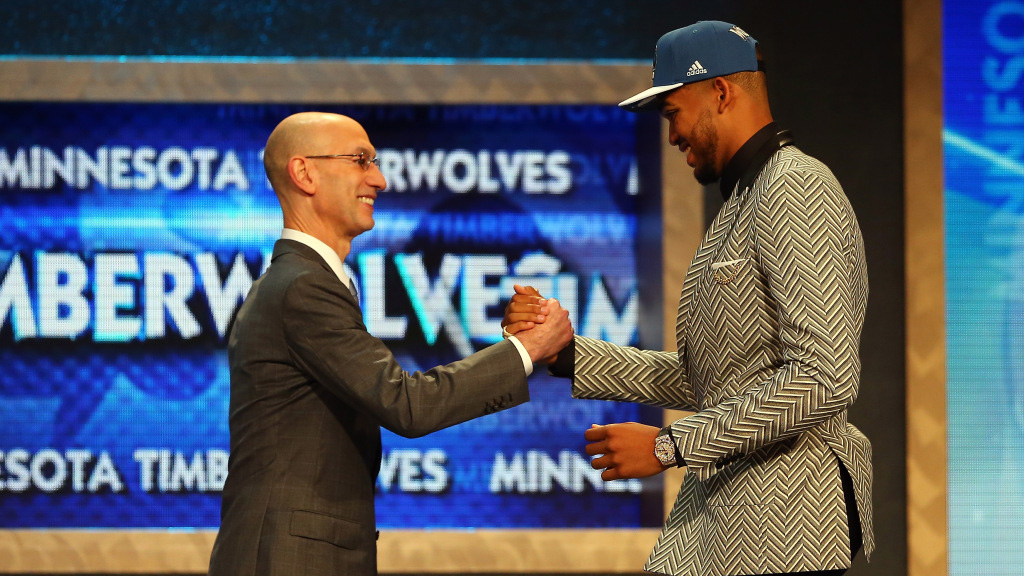 Karl-Anthony Towns meets with Commissioner Adam Silver after being drafted first overall by the Minnesota Timberwolves in the First Round of the 2015 NBA Draft at the Barclays Center on June 25, 2015 in the Brooklyn borough of New York City. Elsa/Getty Images
2017 NBA Draft

All the NBA draft’s one-and-done lottery picks: a scorecard

Karl-Anthony Towns vividly remembers the emotions he felt heading into the night of the 2015 NBA draft. Even though the 7-footer was projected to be the first player taken off the board, the anticipation of hearing his name called still got to him.

There was one big choice Towns had to make that got him into the Barclays Center green room that night, and which led the Minnesota Timberwolves to select him with the No. 1 overall pick. After only one season at the University of Kentucky, where he and a loaded Wildcats squad went 38-0 before losing in the Final Four, Towns decided to forgo his remaining three years of college eligibility and declare for the draft.

“For me, the timing was right. The situation was right. I felt comfortable going,” Towns said. “It was a hard decision, especially after a season like we had in college, and coming up a little short. You want to go back and redeem yourself. But the situation was right, and talking to my family I thought it was best I take that next step to go to the next level.”

At 19 years old, Towns was “one-and-done” — a classification that’s dominated the landscape of basketball for the past decade. Since 2006, when a new collective bargaining agreement mandated that draft prospects be at least 19 years old and a year removed from high school, players have been able to attend college for just one year before electing to join the league. Some prospects have avoided college altogether before going pro. Brandon Jennings and Emmanuel Mudiay both played a year of ball overseas before declaring, while the NBA granted Thon Maker draft eligibility in 2016 without him going to go to college because he was 19 years old and a year removed from earning his high school diploma.

With drafts featuring younger and younger prospects (according to The Undefeated’s mock draft from senior NBA writer Marc J. Spears, 10 of the projected top 14 picks are one-and-done players), some have called for a change.

“My sense is it’s not working for anyone,” NBA commissioner Adam Silver said before Game 1 of the 2017 NBA Finals. “It’s not working for the college coaches and athletic directors I hear from. They’re not happy with the current system. And I know our teams aren’t happy either, in part because they don’t necessarily think the players who are coming into the league are getting the kind of training that they would expect to see.”

So, from a player’s perspective, should the rule be changed?

In the past 10 drafts, 55 one-and-done players have been selected in the lottery (the top 14 picks), including the past seven No. 1 picks. Only nine of those 55 have become All-Stars (Anthony Davis, Andre Drummond, Kyrie Irving, John Wall, DeMarcus Cousins, DeMar DeRozan, Derrick Rose, Kevin Love and Kevin Durant). Here’s a list of the one-and-done lottery picks, and each player’s career accolades, since the era began in 2006.