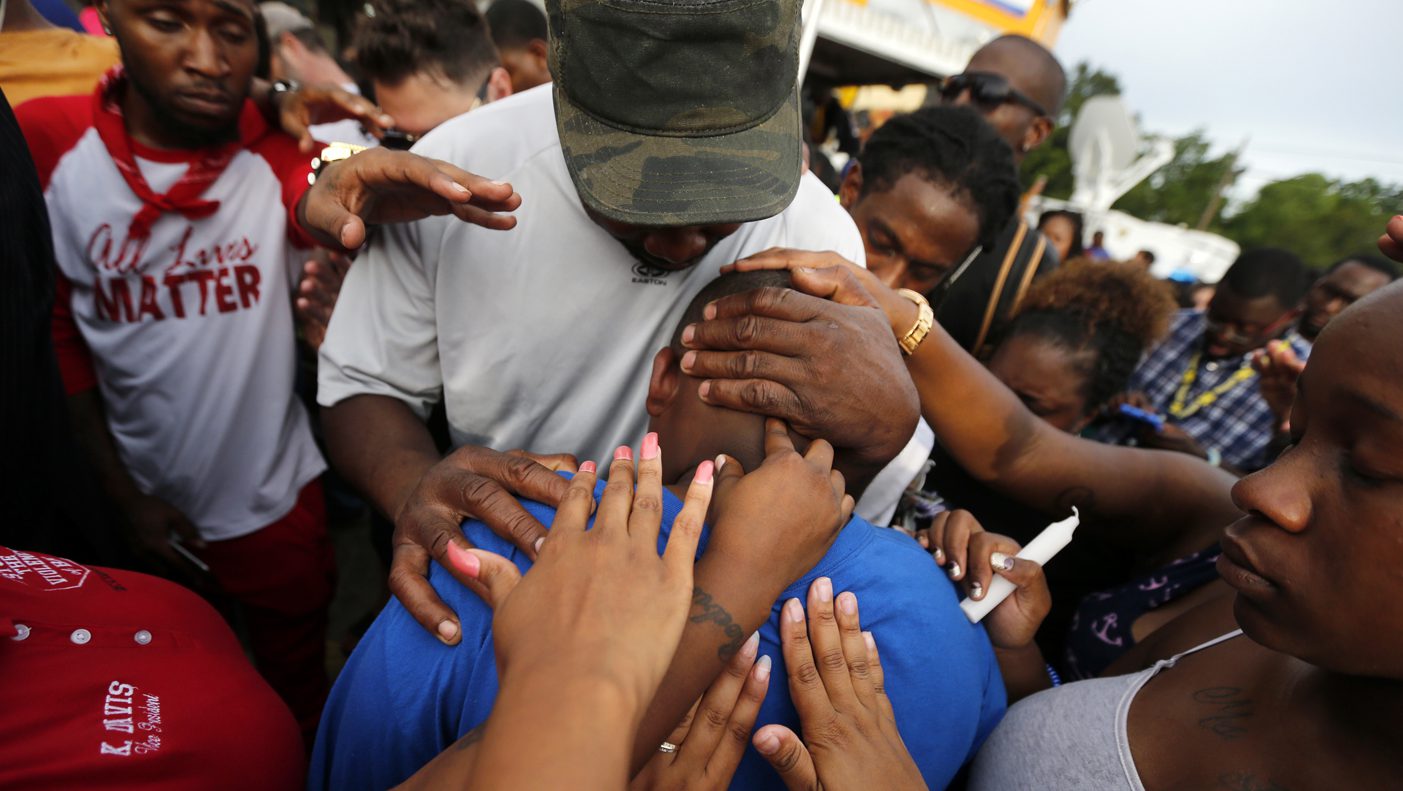 Cameron Sterling, son of Alton Sterling, is comforted by hands from the crowd at a vigil outside the Triple S convenience store in Baton Rouge, La., Wednesday, July 6, 2016. AP Photo/Gerald Herbert
Commentary

We’ve been here before, so why does this madness keep happening?

It took hours before I could bring myself to watch the video of 37-year-old Alton Sterling being fatally shot by the Baton Rouge, Louisiana, police. I was trying to digest and recover from that video when I learned a St. Anthony, Minnesota, police officer had shot another black man, 32-year-old Philando Castile, who was pulled over for a busted taillight. The video aftermath of that shooting was posted on Facebook.

I want to turn away from these video diaries of an America gone mad and trying like a desperate fiend to pretend like something else, anything else, is the problem. Like it’s drugs – but, mind you, not the epidemic of white folks doing heroin. Or people violating gun laws – but not Castile, who was shot after allegedly telling the officer he had a legally authorized gun. Or a broken taillight, yes that’s it. Over and over, black people keep violating these god damned city ordinances and that CANNOT STAND.

I finally know what the problem is. It’s existential. America has all these n—— running around in its head, and they’re driving you crazy.

And now that fear in your mind haunts your waking day. Has you jumping at shadows, spooks, in other words, us, as we reach for wallets, or try to sell CDs. Don’t believe me? Let’s go to the videotape. Every single one of them is in the death-by-scared-police-officer canon.

“Philando Castile was stopped for a broken tail light. That is neither a felony nor a capital offense. He was licensed to carry the gun he possessed. There were no warrants for his arrest. So I guess the problem is that he himself – his body, his life, his very existence – was illegal,” Yale University law professor Tracey Meares wrote on Facebook Thursday morning.

Sterling was killed outside the Triple S Food Mart early Tuesday morning by officers responding to a call about a man selling CDs who’d allegedly threatened someone with a gun. According to a Washington Post database of police shootings, he was the 505th person killed by on-duty officers since the beginning of the year. Castile was No. 508. But in recent memory, he was part of an Eric Garner-Tamir Rice-Laquan McDonald video continuum. Cellphone video of the incident taken by a bystander went viral and hundreds protested outside the store.

I thought to add: It probably contains images you cannot unsee. This video is potentially inappropriate for some (democracies).

“The video is disturbing to say the least,” said Louisiana Gov. John Bel Edwards on Wednesday. Louisiana permits the open carry of firearms for nonfelons over 18. Sterling had an arrest record. The Justice Department has announced it is launching a federal investigation.

I had to ready myself for this descent into summer madness, so instead of immediately watching the 48-second video of Sterling getting shot, I first watched the Baton Rouge Police department’s Wednesday morning news conference. It opened with a prayer and demands for transparency. The officers involved were Blane Salamoni, a four-year veteran of the force, and Howie Lake II, on the force three years. There was talk of peaceful assembly – not that the police be peaceful – but an entreaty and warning to those protesters who might take to the streets. There was a civics lesson on the “No. 1” rating of police and the city’s general “excellence,” by Melvin L. “Kip” Holden, the black mayor-president of East Baton Rouge Parish. And there were warnings by the white Parish District Attorney Hillar Moore III against ill-intentioned outsiders making trouble.

Moore cautioned that when you have events like this “things are picked and choosed.” He cited the city’s declining murder rate and its focus on young black males in high-risk groups. And because I’m clear this is all summer madness, I understood where he was coming from. So I think it is also perhaps appropriate to tout statistics about women killed by domestic abuse during campaigns against deadly drunken drivers, since both things land women dead. Actually, what might be more appropriate, if I’m the district attorney, would be to look for causal links. To perhaps tie inadequate schools and the loss of urban and Rust Belt jobs to crimes, such as murders, for which people are held accountable. Then to put killing under the sanction of state authority, where there’s the perception among African-Americans that police officers are not held accountable, in its own worrisome category.

Instead of watching Sterling getting shot, I talked to Michael Jenkins, a professor at the University of Scranton, an expert on community policing. He’d heard about Sterling’s death on social media, but like me, had not yet seen the video. The spate of police-involved videos over the last few years raises the same questions repeatedly.

“Again, it speaks to this idea of the central theme of policing, which is the use of force,” said Jenkins. It raises questions about shootings becoming mundane and whether seeing these videos over and over make us desensitized. “I don’t want to watch another video in which police are killing someone, and certainly I don’t want to see it where it reaffirms the racial application of deadly force,” he said.

Instead of watching Sterling getting shot, I watched a video of Sterling’s 15-year-old son Cameron, a tall, heavy-set young man who covered his face with his shirt and sobbed at the news conference as his mother, Quinyetta McMillon, talked about Sterling as “a man with children who depended upon their daddy on a daily basis.” Cameron took his arm from around his mother’s shoulder, crumpled into himself and started calling out, “Daddy! Daddy!” and I saw him in the way America doesn’t see children who look like him. I saw him as this big baby boy – and not the kind we love because he has a basketball in his hand – but the kind few imagine even exists. The men in the crowd patted his back. Someone cried out, “Ooh, Lord.” He was still crying out “Daddy,” as they led him off.

After that, I could watch anything, so I clicked on the Sterling video. Sterling is confronted, pushed to the ground, restrained with the help of a second officer. Someone says, “He’s got a gun.” Sterling is shot at close range and the camera falls away. “Oh, my God,” a woman cries out, then starts to cry. “They killed this boy,” someone else says, and the camera goes dark.

I called Jenkins back after I watched the video. He’d watched it too. “I take back what I said,” he told me. These videos never fail to shock. “It still struck me as if it were the first time” seeing one of these. It’s the intimacy. The closeness of the camera. The eye level of death. The notion that, video by video, something precious is falling away from us as the camera is falling away to the cries of bystanders.

But fear is an emotion. One that the police cite every time they shoot somebody dead.

Two years ago, Levar Jones was shot by South Carolina state trooper Sean Groubert after Jones was stopped at a gas station for a seat belt violation and complied with Groubert’s request for license and registration. When that video surfaced, Groubert was fired and indicted. He pleaded guilty in March to assault and battery.

It didn’t take me as long to watch the video of Castile’s girlfriend, Diamond Reynolds, who, with game-changing composure, narrates what happened after the police shot Castile after stopping them for the broken taillight. “You shot four bullets into him, sir … you told him to get [his license and registration], sir. Please don’t tell me my boyfriend is gone.” She doesn’t start getting overwrought until she starts calling out, “Please, Jesus. Please nooo!”

We see it over and over, Jenkins says, though most police interactions with the public don’t involve violence and statistically the numbers of officers shot and killed is dramatically down, from an average of 127 per year in the 1970s to 42 in 2015.

“Police use of deadly force against citizens: it comes down to fear taking an inordinate place in the police perspective,” Jenkins said. It is coming in hot – putting themselves in positions where they can then say they feared for their lives. And that’s one of the things that is the hardest to watch in each of these videos. In the land of the free, and home of the afraid, the frayed, the ‘buked and scorned Freddy Gray’ed.

They’re so frightened, but, Lord, we’re the ones who end up dying.