There’s no denying that despite his flawed life

Since O.J.: Made in America Part 1 aired, I have been engaging in some difficult weekend conversation.

Real talk about the criminal justice system, domestic violence and America’s troubling track record policing black communities. So the text I got from a friend saying, “Damn, he was a hell of a running back,” offered a welcome momentary reprieve from the other heavier topics.

O.J. Simpson: Made in America

I wasn’t alive when Simpson was still playing, so I had to find some old footage. And yes, it’s true, he was a hell of a running back. Despite his imposing frame, he was not a power runner. He was an explosive opportunistic rusher. On the field in the 1960s and ’70s, Simpson gracefully juked, dodged, and eluded linebackers as instinctively as he evaded his social responsibility to the Civil Rights Movement. He would slither through a gap in the defense and use his gifts to leave defenders and teammates behind, not unlike the way he navigated America’s political and social minefields, leaving behind his identity, people and eventually, his dignity. 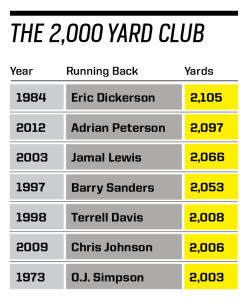 In 1973, Simpson had arguably the best season for a running back in NFL history. Simpson, the league MVP, surpassed Cleveland Browns running back Jim Brown’s single-season rushing record of 1,863 yards. Not only did Simpson pass Brown, but he was the first back to rush for more than 2,000 yards in a season. Behind his offensive line, wittily nicknamed “The Electric Company” because they turned on “The Juice,” Simpson ran for 2,003 yards.

In the 42 seasons since Simpson’s record-breaking campaign, only six other running backs have bested his mark and joined him in the 2,000-yard club. Eric Dickerson of the Los Angeles Rams was the next back to net more than 2,000 yards in a season, gaining 2,105. Dickerson and his hip ’80s Jheri curl broke the record in 1984. Between ’84 and now, five other running backs have broken the 2,000-yard threshold, filling the space between Dickerson and Simpson.

Lost in the otherworldly statistics and talents of the names above is that only one man ran for 2,000 yards before 1978. In 1978, the NFL went from a 14-game regular season to the 16-game season, we now know. Simpson’s 2,003 yards in 14 games averages to 143.1 yards a game, the highest single-season per game average in NFL history. Brown is a distant second at 133.1 yards a game. 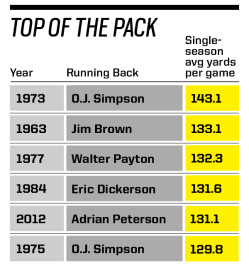 If we use per-game averages multiplied by a 14-game season, the NFL only has one 2,000-yard rusher in its long history: Orenthal James Simpson. If Simpson’s 143.1 average was applied to a 16-game season, he would easily be the NFL’s all-time leading rusher. He would gain 2,290 yards, 160 yards more than Brown’s 16-game projection of 2,130 yards.

We cannot go back and correct the slew of awful things for which Simpson is responsible. And he should be remembered more for his off-field transgressions than his on-field brilliance. But make no mistake, the O.J. Simpson in 1973 is the best running back the NFL has ever seen.