Kyrie Irving channels his creativity with the Nike Kyrie 6

NEW YORK — Ben Nethongkome still remembers all the road trips he took to see Kyrie Irving two summers ago. The senior Nike footwear designer would hop in his car and make the nearly 200-mile drive from Portland, Oregon, to Seattle, where Irving spent three weeks of the 2018 offseason to reset ahead of his eighth year in the NBA, and the second one with the Boston Celtics, following two knee surgeries.

Nethongkome would watch him practice with fellow players in private workouts and pickup games led by league veteran Jamal Crawford. And when Irving wasn’t training, they’d meet up to work on the Nike Kyrie 6, the latest installment of the point guard’s line of signature sneakers.

“We sat down and invested hours in designing the shoe together,” Nethongkome recently recalled at the Brooklyn Nets HSS Training Center. “Really just busting out pen and paper and pencils and tapes and product. That was really refreshing to see an athlete get down and dirty with you. … Kyrie’s a creative, on the court and even in design sessions. He’s not a guy who’s gonna sit in the back of the room and observe from afar. He’s really in the nitty-gritty.”

More than a year after those meetings, the Kyrie 6 has finally arrived, marking a new chapter in the 27-year-old’s life and career. Irving — who signed a four-year, $141 million deal in July with the Nets, a franchise he grew up supporting as a kid from West Orange, New Jersey — will debut the shoe on Monday night at Barclays Center in Brooklyn during a game against the New Orleans Pelicans.

For Irving, his new sneaker represents an authentic transition from athlete to artist. The six-time All-Star and NBA champion always envisioned designing his own shoe. And this time around, throughout the creation process of the Kyrie 6, he became more hands-on than he’d ever been with any of his previous five models.

“What separates my Kyrie 6 from the rest of my line is really just the creative design behind it,” Irving said. “I’ve had a huge, huge hand in a lot of designing processes before. But this is the one where I really, really started from being in a hotel room, having a bunch of ideas and boards, and trying to combine a bunch of my favorite shoes and favorite ideas into one.”

Irving is one of just six basketball players in the history of Nike Basketball — joining an elite company of Charles Barkley, Sheryl Swoopes, LeBron James, Kobe Bryant and Kevin Durant — to receive six or more signature sneakers during his/her playing career. (Penny Hardaway and Scottie Pippen each reached the mark after retiring. And though the Jordan Brand was officially established as a subdivision of Nike until 1997, Michael Jordan has always been in a category of his own with the company.)

Five years ago, at the age of 22 during his fourth season with the Cleveland Cavaliers, Irving got his first signature shoe — the Nike Kyrie 1 — designed by Leo Chang, who also crafted the Kyrie 2 and Kyrie 3. By 2017, Irving began working with Nethongkome, who led the design process for his past three signature models, the Kyrie 4, Kyrie 5 and Kyrie 6.

“Working with Ben has been a true representation of being able to be myself,” Irving said. “I can really talk to him. We’re pretty close in age, so we have an understanding of what sneakers have held a timeless piece in the culture.”

The Kyrie 4, which arrived during Irving’s first season with the Celtics, was incorporated into his feature film debut in Uncle Drew in 2018. The shoe also became the centerpiece of one of the most unique sneaker collaborations in recent memory — a partnership between Nike and General Mills that delivered an epic pack of Kyrie 4s inspired by cereals, from Wheaties to Cinnamon Toast Crunch, Kix and Lucky Charms. 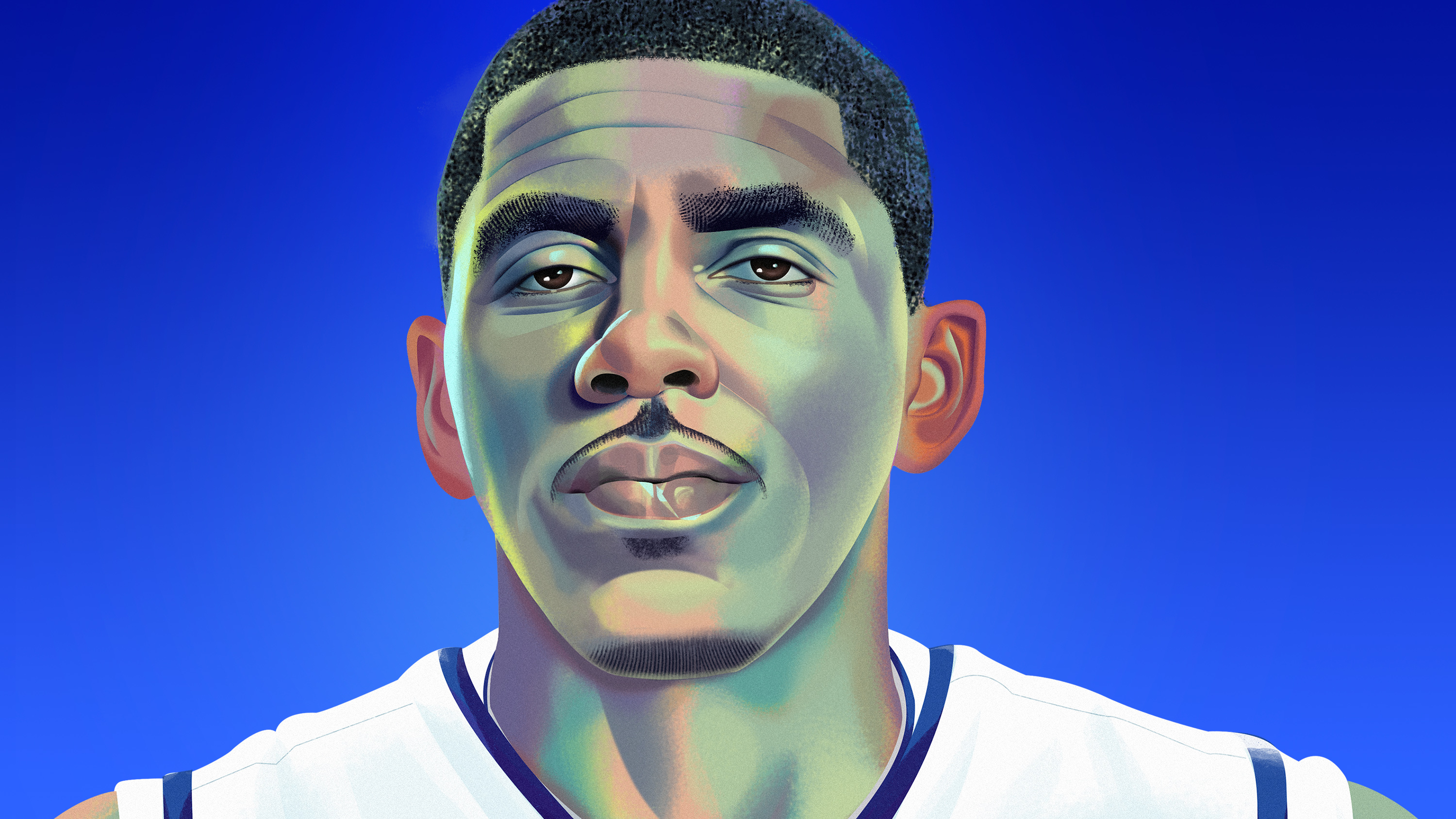 Kyrie Irving: One and done to No. 1 Read now

Irving continued his reign as the king of collaborations with the Kyrie 5 during the 2018-19 season, wearing models of the shoe he worked on with Travis “Taco” Bennett from the hip-hop collective Odd Future, international lifestyle brand Concepts and the Los-Angeles-based streetwear brand Rokit. Don’t forget the pair of Kyrie 5s inspired by the timeless sitcom Friends. And with last season marking the first time in NBA history that players could wear sneakers without any color restrictions, Irving took full advantage, breaking out 1-of-1 player exclusive (PE) versions of his shoe nightly.

Meanwhile, Irving’s next shoe — the Kyrie 6 — was already in the works.

“My vision was just making sure we have a high-performance basketball shoe on court that doesn’t feel lesser than the previous models,” Nethongkome said. “Coming to the table, it was like, ‘Hey, let’s just talk it through. What do you want, Kyrie?’ ”

Irving had a simple answer. Instead of starting with prototypes and specific ideas from a team of designers — the way the process of creating his shoe had taken shape every time in the past — he wanted to start from scratch.

“Like a J. Cole album with no features, Kyrie wanted us to bring it all back for the 6 and be a little more strategic,” Nethongkome said. “He was really involved with the process.”

Irving studied designs of sneakers he grew up admiring and wearing — from Michael Jordan’s iconic line of signature Air Jordan basketball shoes to Kanye West’s Nike Air Yeezy line, which changed the concept of collaborative lifestyle footwear. Working together in Seattle, Nethongkome and Irving took blank silhouettes of sneakers and mapped out what the Kyrie 6 could look like, using tape and markers to visualize the midsole and outline where the Nike Swoosh logo could land. During creative sessions for the Kyrie 6, Irving became captivated by the trial-and-error methodology of sneaker design.

“This one was just a complete blank canvas,” Irving said. “Let’s start from ground zero and let’s build this into a huge, huge art piece that we can be proud of … I go back to just having that transparency with Ben and just really being able to pick his brain. And seeing what is possible that we can make happen. What could we do with this shoe? What could we do to separate this next shoe from the last one? How do we mess up and keep being successful? Keep failing over and over and get it right. That’s what I have with him — just that relationship to be able to do exactly what I want.”

Once Nethongkome and his team of designers finished what would ultimately become the Nike Kyrie 6, they met up with Irving in Arizona during a five-game Celtics road trip. Nethongkome had the shoes in a camouflage duffel bag, which he unzipped and emptied onto a large, circular dining table in Irving’s hotel room.

“He was just like arms crossed, and then you see, like, a little smirk,” Nethongkome recalled. “That’s legit approval for him. Like, ‘Yeah, this is it. We got this.’ To have him react that way was really special.”

Irving also can’t forget the first time he saw the final product of the Kyrie 6, which features new advancements, including a silhouette dropped 5 millimeters lower to the court, a 360-degree grip system and a stabilizing midfoot strap.

“It was like seeing one of those scenes in your own movie,” Irving said. “You could basically see the receptivity of culture that you knew existed outside of basketball. I’ma be hooping in it. I’ma be representing the brand very well. But I did something that I’ve always dreamt of doing, and that’s being accepted as a designer and as a creator myself. … I just had a dream as a kid that when I had the opportunity I was gonna do something that was gonna represent myself and my family the right way. And that the sneakerheads in the culture were gonna be like, ‘Oh, you did it.’ ”

Besides the shoe’s debut black colorway, the first 11 pairs of the Kyrie 6 are inspired by 11 cities across the world with special meaning to Irving — Tokyo, Manila, Shanghai, Beijing, Guangzhou, Taipei, Houston, Los Angeles, Miami, Berlin and, of course, New York, where he teamed up with his close friend, and fellow Nike Basketball signature athlete, Kevin Durant on the Brooklyn Nets this offseason. The New York-themed Kyrie 6 pays homage to the George Washington Bridge, a landmark that holds a special place in Irving’s heart.

“So many memories crossing the George Washington,” Irving said. “Going to my aunt’s house, or going to the Bronx. Being with my dad all day. Watching him play basketball. Really learning from him. Being in different boroughs. Crossing that bridge and coming back home to Jersey. Knowing what the difference in smell is. Know what the feel is. The air is different in Jersey and New York.”

Irving now feels home with the Nets. On Oct. 23, opening night of the season for Brooklyn at Barclays, the point guard debuted the “Pineapple House” Kyrie 5 — a continuation of Nike and Irving’s funnest, and most heralded, collaboration to date, with Nickelodeon and SpongeBob SquarePants. In a 127-126 overtime loss to the Minnesota Timberwolves while rocking the Pineapple Houses, Irving dropped 50 points, seven assists and eight rebounds with zero turnovers.

It was an all-time performance — the most points ever scored by a player in his first game for a new franchise in NBA history — and the beginning of a prolific epilogue to a year of playing in the Kyrie 5, which he’s worn the first six games of this season (fittingly, in six different colorways).

Before Irving takes the court next, he’ll lace up the Nike Kyrie 6 to wear for the first time in an NBA game.

“He’s voiced to me that the Kyrie 6 is one of his most favorite Kyries up to date,” Nethongkome said. “So if there’s just that emotional benefit from that alone, I feel like his game is gonna go even further.”

What does Irving expect from himself on the court in his latest sneaker?

“Just myself, man,” Irving said. “Being exactly who I’m supposed to be … being that guy that leads his team.”