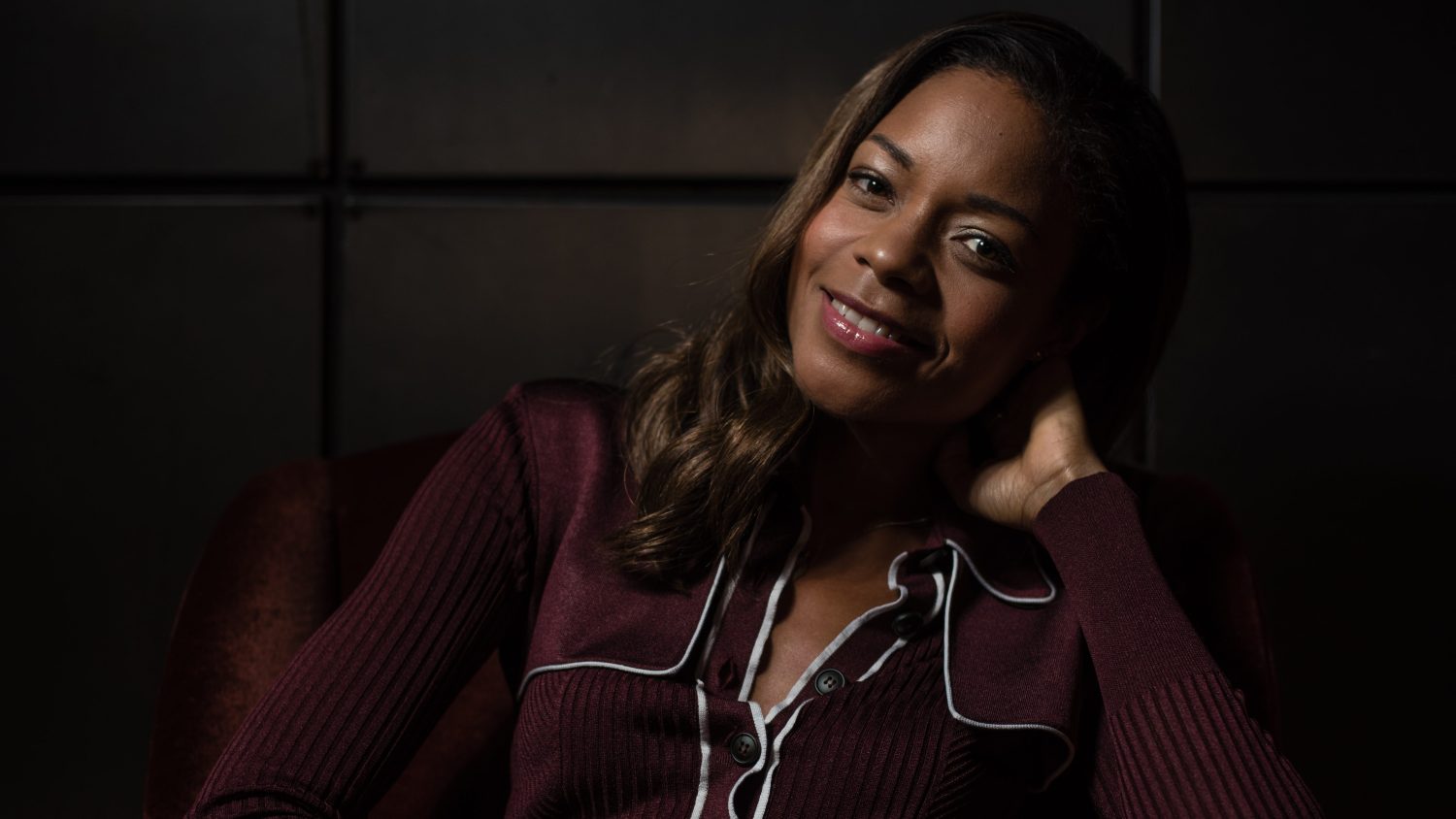 Naomie Harris stars in the coming of age movie, Moonlight André Chung for The Undefeated
The Contenders

She’s the only actor who appears in all three parts of one of 2016’s most raved-about films, but Naomie Harris had a mere three days to film all of her scenes for Moonlight.

She did it while on a brief hiatus from the press tour for Spectre. In the most recent spate of Daniel Craig-helmed James Bond films, Harris has played Eve Moneypenny with smoldering, self-assured wit. But last year, she hopped on a plane to Miami’s Liberty Square housing projects, where director Barry Jenkins was filming, and dived straight into a scene playing a crack-cocaine addict named Paula who has reached a cruel, all-encompassing nadir.

As is her wont, Paula’s banished her teenage son, Chiron, from their home so that she can do drugs, and when we see her the following morning, locked out of her own house, she’s a mess. Chiron (Ashton Sanders) is returning after sleeping at the house belonging to his late mentor, Juan (Mahershala Ali) and Juan’s girlfriend, Teresa (Janelle Monáe), who did their best to offer sanctuary and comfort to Chiron whenever they could.

Paula demands that Chiron hand over whatever money Teresa has given him, at one point lunging for his pockets, until Chiron relents. She doesn’t give him the opportunity to shower or bathe, but insists he go to high school wearing the same clothes from the day before.

“It was actually much rougher in some of the cuts that we did that didn’t end up being in the movie. It was really hard,” Harris said. “That’s a really tough scene for Ashton emotionally, so afterwards we would just hug it out. He was a really sweet and lovely guy, and so I just made sure I was super nice to him in between takes.”

Harris, 40, plays a composite of the mothers of Jenkins and playwright Tarell Alvin McCraney, whose play Moonlight is based upon. The film follows three actors playing Paula’s only son, Chiron, through childhood, adolescence and young adulthood. All the while, Chiron must fend for himself as his mother succumbs further and further to her addiction.

Seeing Harris inhabit his mother was a complicated, emotional experience for Jenkins himself, who was reliving parts of his childhood in the very community where he grew up. “It went from, the process of making the film, got on a scale of one to 10 of personal, like a 15,” Jenkins told NPR’s Code Switch. He described getting so swept up in watching Harris portray his mother that he forgot to yell “cut.” “It was just intense and Naomie was so good.”

What makes Harris’ performance in Moonlight memorable is her ability to inhabit the worst parts of a person. There’s a semblance of reconciliation when Chiron is an adult who calls himself Black (played by Trevante Rhodes). Black visits his mother at an Atlanta rehabilitation center, where she’s decided to stay and work as a counselor. Even as he’s committing an act of love — lighting his mother’s cigarette for her when she can’t — he can’t help but tell her he hates her.

Harris had to quickly nail those scenes that would explain just why Black would say such a thing, including one in which she’s standing at the end of a hallway, screaming at the youngest version of Chiron, called Little (played by Alex Hibbert). Jenkins shot the scene so that the audience would get the full brunt of Paula’s self-loathing and rage — she’s staring directly at the camera.

“I asked Barry to not have Alex [Hibbert] around when I was doing the shouting at him,” Harris said. “I didn’t like the idea of shouting at a child, because I don’t think — even though they may well say, like, ‘Oh, yeah, it’s fine,’ and they seem like they’re OK, I don’t know whether you’re emotionally capable of dealing with that at such a young age. I didn’t feel like with him that I really had to be too mean with him except for grabbing him by the arm one day and hoisting him into the house.”

Because Moonlight’s focus is Chiron, the film does not delve much into Paula’s background — it’s a film about how Chiron’s surroundings shaped who he becomes as an adult. Keeping the actor who played Paula static, while we see Chiron and his first love Kevin represented by different actors in three distinct stages, reinforces that point. However, Harris did research of her own that informed her approach to Paula in ways that aren’t necessarily spelled out on-screen. She loaded up on interviews with crack addicts from YouTube and documentaries about Miami in the 1980s, which is when Moonlight is set.

“I think the two surprising things that I found were that every single one of the crack addicts that was interviewed had been sexually abused or raped and that for me was really — that was when I first got my emotional in to the character because I realized that her addiction was about her wanting to escape this vast emotional pain that she was in,” Harris said. In a conversation with Fresh Air, both McCraney and Jenkins revealed that their mothers had been sexually abused as well.

“Then it lead me into exploring and trying to understand what was her history like,” Harris continued. “Where did she come from? What was her upbringing like? What were her mom and dad like? Then really understanding that she was not given the emotional resources to be able to really go on to parent effectively and capably a child of her own. She was never given the love that she needed, so with an empty tank, how can you fill somebody else’s?”