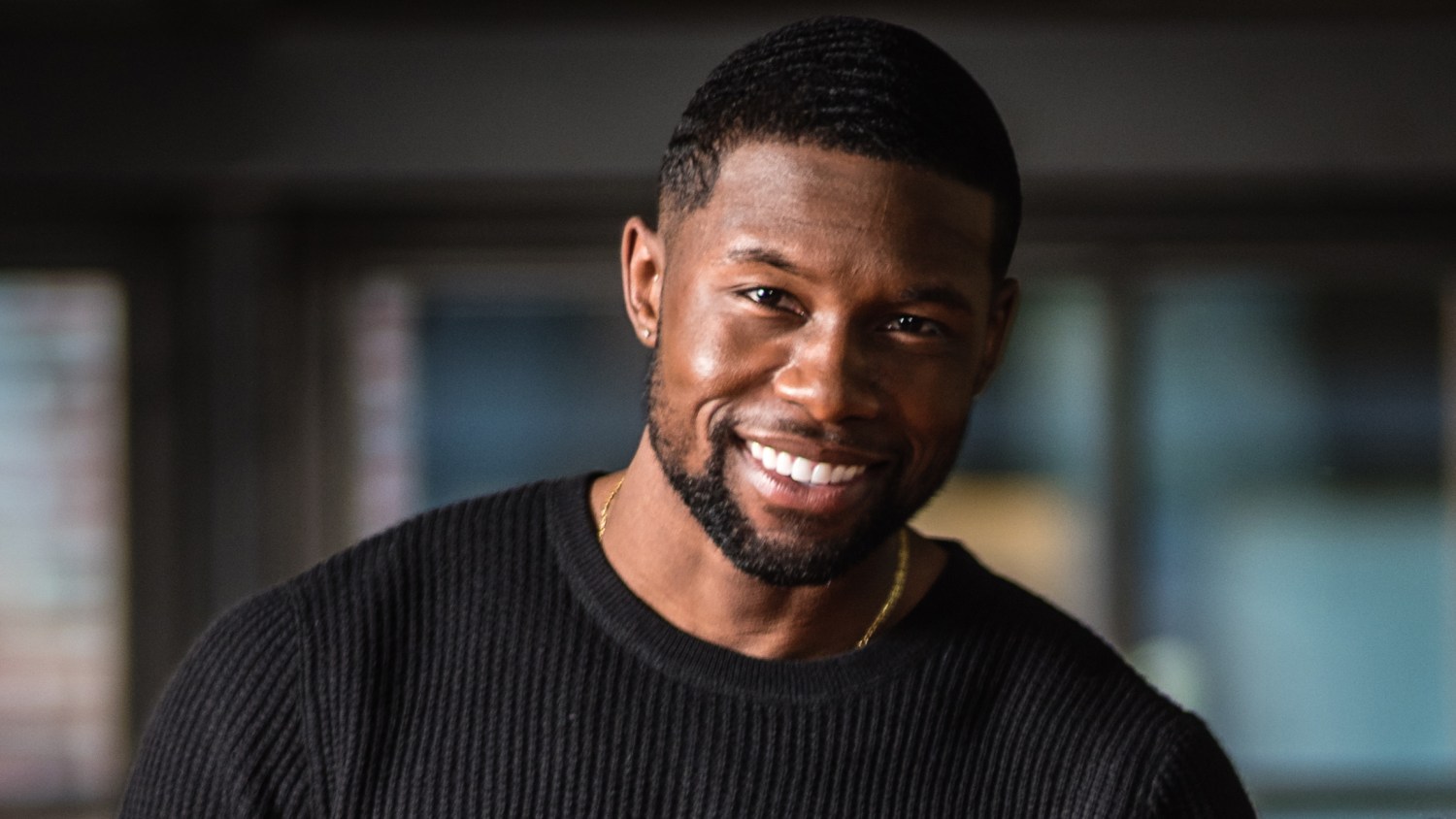 Trevante Rhodes stars in the coming of age movie, Moonlight André Chung for The Undefeated
The Contenders

In ‘Moonlight,’ the body becomes a vehicle to say more than words allow

Trevante Rhodes always equated a muscular physique with success — for his ‘Moonlight’ character, it’s a fortress

Our first impression of Black, the character played by Trevante Rhodes in the coming-of-age film Moonlight, is that he’s still haunted by the traumas of his childhood. We’re introduced to him in the bathroom as he’s lifting his face from an ice-water bath, a method he used in high school to stop his wounds from swelling after he was attacked in the schoolyard. But Black’s face doesn’t bear a single scar. This is an act that’s evolved from triage to ritual.

Our second impression is that, as much as possible, Black has made his body into a fortress. Director Barry Jenkins does a pass over Black’s body as he’s reclining in bed, revealing a man who has obsessively cultivated every muscle in his body, from the ripples in his abdomen to the traps, biceps and triceps that announce themselves through whatever shirt Black happens to be wearing.

Rhodes, 26, plays the adult version of the boy portrayed in three distinct acts in Moonlight, first as a child called Little (Alex Hibbert), then as a teenager who goes by his given name, Chiron (Ashton Sanders), and then finally as Black. The physical transformation between Chiron and Black, which takes place off screen while Chiron is living in an Atlanta juvenile detention center, is one of the most significant elements of the film. It’s a breakout role for Rhodes, charged with communicating so much emotion through his eyes because Black has never been one for words.

Up until he picked up a chair and smashed it over the head of his childhood tormentor, a dreadlocked bully named Terrel (Patrick Decile), Chiron’s defining characteristic seemed to be an inescapable vulnerability. As the undersized Little, he ran from other boys who tormented him in Miami’s Liberty Square housing project, which he called home. But the starkest difference is between Black and Chiron. Where Black appears solid, unknowable and impervious to injury, Chiron is gangly and unsure of himself. He’s all bony limbs, knees, elbows and eyes, his carriage emanating a combination of sweetness, hurt and innocence. Chiron walks with his head bowed and rarely makes eye contact with anyone, as if he wants nothing more than to remain invisible.

But Black is not wholly impervious — he’s simply withdrawn. He hides behind his build and his gold fronts, but he takes his nickname, which he’s even emblazoned on the license plate of his car, along with his home area code, 305, from his boyhood friend and crush, Kevin, the first person who called him Black. When they finally meet again, after years apart, Black drives all night from Atlanta to Miami after getting a surprise phone call from Kevin — you can see him just melting internally at the sight of his first love. It’s perceptible, but only just.

In Moonlight, Black’s body serves a very specific function. It communicates so much about what the character has learned about the physical presence he must project to avoid injury. One of the most visible elements of Black’s sparsely furnished bachelor pad are his weights. If you want to get all Judith Butler about it, his body is the most obvious part of Black’s chosen performance of masculinity. Black’s body says something very specific about him.

But what does it say about Rhodes? After all, Rhodes, 26, didn’t just come to work on set and don a muscle suit to play Black. Before Moonlight, Rhodes, a former All-Big 12 track and field star at the University of Texas, played Ramsey Walters on the OWN series If Loving You Is Wrong. He brought his own body to the character — somewhat. In a recent interview with The Undefeated, Rhodes, who’s been lifting weights since he was 10 years old, revealed that he’d actually lost 20 pounds to play Black.

“I’ve always, like, I don’t know, kind of assumed that the better I looked physically, the more imposing I was, the more successful I will be, because that’s the only thing that I can really control,” Rhodes said. “I need to make sense of everything in life and I’m understanding now that I can’t. You have no control over anything, but I do have control over how this looks.”

He gestured to himself. “That’s literally the only control I have, so I just feel ever since I was young, the best person I could be was a direct correlation of how I looked physically, you know what I mean?”

But why start so early?

“I had my mom to love me and then I had this thing that I saw was success, and the gym was the way to get to that, and running and doing all these things, these physical things, were the way to get to that,” Rhodes continued. “… You know, you see a Greek god — people praise these sculptures of these people who look just incredible. I wanted to be that. I wanted to be a Greek god. I wanted to be an Adonis. I felt like that was something that people would look to and be like, ‘Yo. I don’t even know who this person is, I’ve never heard him speak, but the way that this man looks, that is success.’ ”

Rhodes was sitting in a room in the Georgetown Ritz-Carlton with a couple of his castmates, Naomie Harris and André Holland, along with Jenkins and playwright Tarell Alvin McCraney. McCraney, 36, wrote In Moonlight Black Boys Look Blue, the play upon which Moonlight is based. McCraney, who is gay, pulled heavily from his own life growing up in Liberty City with a mother addicted to crack to write In Moonlight Black Boys Look Blue. She died from AIDS-related complications when McCraney was 22.

Jenkins looked over at Rhodes. “I will say, Greek god notwithstanding, it had to go eight steps past that in order for us to see in you what we saw in you, so you’ve got much more control than your muscles, all right?”

“If it was just that, it wouldn’t have worked,” Jenkins said. “You know that, right?”

McCraney is an accomplished playwright, educated at Yale Drama, who early on spent time in D-Projects, a contemporary dance and theater company. He chimed in, looking at Rhodes.

“I think your answer touches on a lot of what motivates Chiron to become Black,” he said. “… I think a lot about my body as well and always have. As a dancer, my body is always something that I’m like, what figure do I cut in the world? There are times that I actually slump, right? I know you guys don’t see, but there were times that I actually would shrink down. You actually see a lot of guys in the ‘hood who are tall, but for some reason they do this and that. Shrinking comes from a notion of, ‘How do I see myself in the world? What third eye am I looking at, and what does it represent to other people?’ ”

Like Little and Chiron, McCraney, now a willowy, elegant, seemingly self-assured adult, was bullied as a child. That bullying stemmed from the perception that he was gay, but it wasn’t the only motivating factor.

“One of the things I remember this dude told me is, ‘You know why I hit you, why dudes come after you? Because you walk like you’re proud and they gon’ to knock that out of you.’ And I was like, ‘How do I walk like I’ — trust me, I don’t think I had any more pride than anybody else, but I always walked sort of shoulders back, head up high like a dancer. But that signaled pride and that pride is what’s going to cause you too much attention, negative attention. Sometimes you get those reflections back of that and you start ingraining a — then what does success look like? I think that’s an important conversation.”

“That’s funny,” Jenkins said. “Chiron knows already to not walk that way, but this dude fortifies himself so he can.”