Lamar returns with his fifth and most personal album yet

In 1972, a month after Congress passed the Equal Rights Amendment that aimed to eliminate discrimination based on sex, John Lennon and Yoko Ono released a record called “Woman is the N—– of the World.” The phrase, which Ono coined in a magazine interview some months earlier, was widely criticized. You can imagine why: The use of a racial epithet to describe another group’s oppression is bafflingly ignorant and hateful, and it also obfuscates the intended message about women’s plight.

Unfortunately, Kendrick Lamar did his best to recreate Ono and Lennon’s tone deafness on his latest project, Mr. Morale & The Big Steppers. On the song “Auntie Diaries,” the rapper goes to great lengths to show the need to love, accept and support our trans family members. And given hip-hop’s anti-gay past, it’s a monumental moment for one of its biggest stars to make a song like this. However, the good deed is all but undone by Lamar’s persistent use of an anti-gay slur. Like Ono and Lennon before him, the slur overshadows the message.

This choice is indicative of what bothers me about Mr. Morale. Even as he pushes rap to address subject matters not often broached by megastars, he makes glaring philosophical and rhetorical decisions that are hard to get past. These decisions are even more frustrating when you consider how avoidable they are and how close to perfect the album is otherwise. 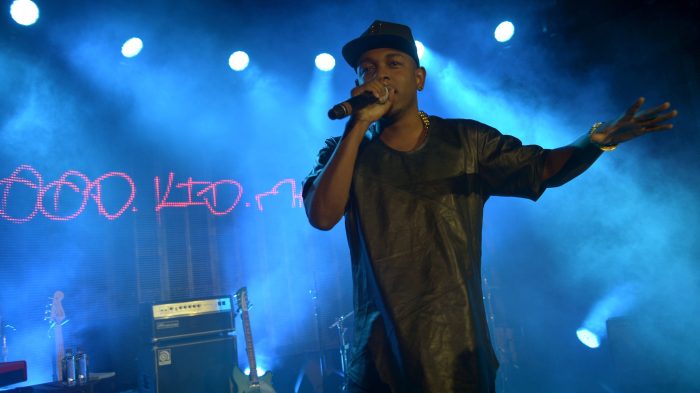 Lamar’s fifth album is a memoir delving into the things he’s discovered about himself in the five years since the release of DAMN. Before dropping Mr. Morale & the Big Steppers, Lamar suffered from crippling writer’s block (on “Worldwide Steppers,” he raps: “Writer’s block for two years, nothin’ moved me/Asked God to speak through me“), and he also sought out German self-help guru Eckhart Tolle for therapy. Through his self-exploration, Lamar learned his unfaithfulness to his partner, Whitney, comes from a “lust addiction” borne out of a need to bury his trauma in sex (“There’s a lustful nature that I failed to mention/Insecurities that I project, sleepin’ with other women“). On “United In Grief,” Lamar details a night of infidelity based on a shared trauma with a green-eyed woman: “Green eyes said her mother didn’t care enough/Sympathize when her daddy in a chain gang. … Green eyes said you’d be OK, first tour sex the pain away/I grieve different.”

But it’s “Mother I Sober” that breaks your heart while honing in on the impact of sexual trauma. In the song, Lamar shares a revelation — that constantly being questioned about whether his cousin molested him as a child caused its own form of trauma. While Lamar says his cousin never touched him, the persistent questioning led him to wonder if he could trust his own perception of reality. His gauze for the wound: having sex with random women on tour, despite being in a relationship. Lamar parallels his struggles with his mother’s, who was abused. “Mother I Sober” is one of the more immersive, captivating examples of Lamar’s storytelling in a career full of them. The track, which is the penultimate song on the project, puts together the revelations that Lamar scattered throughout the album. “Mother I Sober” knocks you back, forcing you to sit in silence, absorbing its full weight. It’s also the type of song that makes Lamar one of the most gifted songwriters of his generation.

As Lamar opens up, he takes breaks throughout to explain that these necessary moments of self-healing are why he isn’t delivering the album that many may have expected — an opus on the current state of the world — especially after 2015’s “Alright” became an anthem of Black Lives Matter protests around the globe. But Lamar’s need to make himself better at the expense of talking about the state of the world carries its own guilt as he still feels a duty to save his people: “Sorry I didn’t save the world, my friend/I was too busy buildin’ mine again.”

As someone who found his life in need of repair as the world fell apart and felt like a failure for not doing more for the greater good, I sympathize with Lamar’s guilt. That’s why the album’s closer, “Mirror,” feels like he is accepting his own apology. The hook — “I choose me, I’m sorry” — asks the listener to understand why Lamar couldn’t be front and center in the wake of George Floyd’s murder by police, but also he allows himself the avenue to accept his decision and understand its necessity. It’s a prioritizing of oneself that goes beyond the “self-care” platitudes of a spa day or a vacation — instead Lamar is advocating for a purposeful restructuring of his life to put his well-being first before trying to help the world. The tracks with this message are also, rather intentionally, the songs that are the most chant-worthy (see also the chorus to “Savior,” which hits on similar topics), as if Lamar is encouraging us to embrace our healing as well, beginning with repeating after him.

Other songs, though, have the exact opposite effect, making me never want to revisit them long enough to repeat any of the lyrics. For every song like “Purple Hearts,” which is catchy and begging for repeat listens, there’s a song like “We Cry Together.” The song, which features actress Taylour Paige, is five minutes of a couple screaming obscenities at each other. And while the vocal inflections Paige uses to emote are sometimes riveting and the rhyme schemes and drama are compelling, it’s not a song I ever see myself visiting again. The same goes for “Worldwide Steppers,” a song that seems more fitting for a spoken word event than a hip-hop album. These songs aren’t bad per se, they just seem to exist to be appreciated more than enjoyed, which has me thinking a lot about the function of a song to begin with, but that’s a discussion for another time.

What makes Lamar so uncanny is the way he tackles so much of his album’s complex issues without sacrificing any of his lyrical dexterity. It’s common — and understandable — for musicians to have to simplify rhyme schemes to convey complex emotions. But Lamar bends words and patterns at will, making any syllable rhyme that he wants. Just follow the “o” sounds in this couplet from “Mother I Sober”: “Frozen moments, still holdin’ on it, hard to trust myself, I started rhymin’, copin’ mechanisms to lift up myself.” 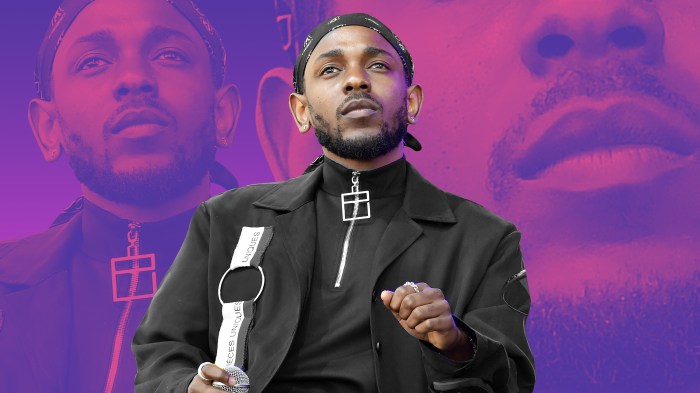 So when Lamar lets loose on a more shallow song like “N95,” it’s a firestorm of patterns, flows and internal rhymes. “The world in a panic/The women is stranded/The men on a run/The prophets abandoned/The law take advantage/The market is crashin’/The industry wants.” It’s less like rapping and more like tumbling dominoes out of his mouth, each one falling in the precise place it’s supposed to, until a larger picture becomes clear.

Lamar has been criticized before, though, for the notion that his artillerylike rhyme patterns can sometimes cover up messages his listeners would otherwise disagree with if they weren’t mesmerized by his delivery. For example, the third verse on 2015’s To Pimp A Butterfly’s “The Blacker The Berry” sounded a whole lot like “what about Black on Black crime,” even though it was pleasing to the ears. And there are definitely places on Mr. Morale where I have philosophical disagreements with Lamar, like his ideas about having sex with white women as a get-back for slavery and racism, or his tired takes on cancel culture (“If your opinion f— around and leak, might as well send your will,” he raps on “Worldwide Steppers,” insinuating that a controversial opinion can end your career). Those quibbles I can live with while giving them a hearty side-eye.

But there are instances where Lamar is just dead wrong. And wrong in harmful ways. First, the aforementioned use of the slur on “Auntie Diaries” — deploying a slur to prove a point about how it causes harm is like Eminem railing against the ills of racism while using the N-word to prove his point. (In 2018, Lamar admonished a white fan who used the N-word when rapping along to his music during a concert, telling her, “You gotta bleep one single word.”) Lamar also misgenders his uncle and cousin throughout the song, and while he may find artistic merit in doing so, it is antithetical to the overall theme of the song. And it’s so easily fixable, too. All Lamar needed was one sensitivity reader or queer person or a book on the topic to help him get it right.

The other egregious artistic choice on Mr. Morale & the Big Steppers is the inclusion of Kodak Black. In 2021, Black was charged with rape and sexual assault of an underage girl five years before, and he ultimately pleaded guilty to a lesser assault charge. Kodak Black also made distasteful comments about actress Lauren London being newly single after her partner, Nipsey Hussle, was killed — which makes his inclusion on the album even more quizzical given Lamar’s close friendship with the slain rapper. On Mr. Morale & the Big Steppers, Kodak Black acts as a narrator, appearing in a couple of interludes and song intros while also providing a negligible verse on “Silent Hill.” 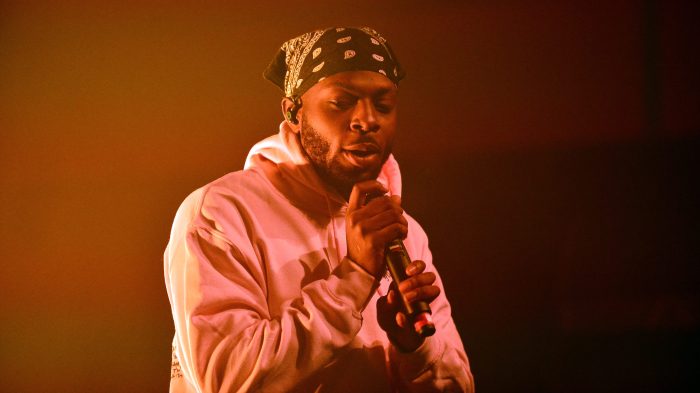 At first blush, it’s easy to dismiss Black’s appearances as Lamar trying to rile up the “cancel culture” argument. But he seems to be making a more thoughtful, though no less misguided argument here. At the end of “Mother I Sober,” Lamar refers to a history of rape culture that abuses young men and contributes to them lashing out at women and perpetuating misogyny. His cry for understanding about where the men are coming from instead of judging them seems to be a direct argument for including Kodak Black in the album. In a vacuum, the exploration of the cyclical nature of misogyny and sexual abuse is poignant and worth discussing. But giving Kodak Black a platform is a bridge too far. While trying to sympathize with victims and provide a space for forgiveness, Lamar is also denying that same grace to Kodak Black’s victim, and other victims of sexual assault, who see a violent offender celebrated on what could be one of the highest-selling albums of 2022.

I could sit here and tell you Lamar’s heart is in the right place, which I think it is. But that’s little consolation for those impacted by the slurs and Kodak Black’s appearance. I can’t blame anyone who wants to dismiss the album or Lamar himself — the offenses are that grievous. They’re also doubly frustrating because they were so avoidable. There’s a world where Mr. Morale & the Big Steppers doesn’t include Kodak Black, and “Auntie Diaries” is executed better. (For what it’s worth, the edited version of the song without the slur is much more enjoyable to listen to and makes the message shine brighter.) In that world, the album feels like something better, something closer to flawless.

But then again, that’s part of the point. Lamar used his fifth album to put his ugliest and darkest self under a microscope, and then blew those images up for the world to see. Mr. Morale & the Big Steppers is an unflinching, sometimes depressing, often uncomfortable self-flagellation with the meaning of self-actualization as a Black man at the center. We all need more of that. I just hope we can collectively get to a place where that exists without leaving more vulnerable populations in its wake.