DETROIT – Every so often in this era of fake authenticity, manufactured hype, and relentless gentrification of Black culture, something real rises to the top.

That describes the new sneaker collaboration between Jordan Brand and the Detroit boutique Two18, owned by sneaker connoisseur and hip-hop artist Roland Coit. His remix of the Air Jordan 2 Low is a fresh breeze through the swamp of sneaker reissues, with layers of detail and meaning that give the shoe something truly rare: originality.

Coit’s shoe, plus his capsule collection of sweats, T-shirts, and shorts, dropped exclusively at Two18 on Oct. 14, followed by a wider release at select Jordan Brand retailers and Nike.com. The event also represents a long overdue opportunity for a local Black business and an acknowledgment of cities beyond the usual haute haunts. Hip-hop created and sustains sneaker culture, yet only 5% of sneaker retailers are Black in a market that generated $70 billion in sales in 2020. 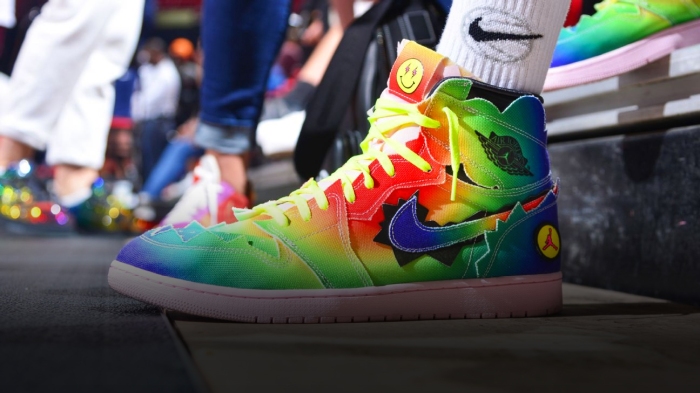 “This could be a culture shift for Detroit, for Michigan, for the Midwest,” Coit, 43, told me as we sat in his store, an airy space off the Eastern Market district near downtown.

In terms of hip-hop, Detroit has always had a lyrical boom-bap element, pioneered by the streetwear designer and DJ Maurice Malone, who cultivated a movement that nurtured J Dilla, Eminem, and others. Another distinct but overlapping scene was filled with dope boys and gangsters who wore gators, permed hair, campaign hats, and danced the Errol Flynn. Today, Detroit is still known for fur coats, Cartier frames, color-coordinated outfits, and a musical legacy that inspired Coit to start DJing as a teenager.

His store, which opened in February, is the sister establishment to Burn Rubber, a spot in suburban Royal Oak where Coit first made his mark. But Coit’s path to this moment – a Black man elevated to a global stage by one of the world’s most recognizable brands – started in his hometown of Pontiac, 30 miles north of Detroit.

When placed side by side, the left and right insoles of the new Jordan 2 form a map that features not only Pontiac, Detroit and the beleaguered Flint, but if-you-know-you-know locations such as Lambertville, Rockville, and Southfield.

“I didn’t want it to be my shoe. It’s our shoe,” Coit said. “It’s for that kid that waits in line for three days, for the resellers that are buying them to flip, I want everybody to take a level of ownership. Then I put in neighborhoods like Highland Park, Southwest Detroit, Oak Park, Inkster.

“It’s not just putting my logo on it and saying it’s fresh because of that. If you’re a kid from Pontiac, you’ve never seen your name on a map. Now you’re about to see it on a Jordan shoe that’s going across the world and a T-shirt that’s going to be literally all across the world.

“It gives you this level of hope.”

Coit and Mario Butterfield, brand manager of Two18 and lead designer of the shoe, conceived the outside of the sneaker as a forward flow of nubuck, suede, and leather. The different textures, from the plastic heel to the pebbled side panel — a nod to the faux lizard skin on the original Jordan 2 — create a rhythm of brown shades. “I want people to wear it. I don’t want it to be so crazy-looking that you want to just put it on a shelf,” Coit said. The double-layered piping, blue on red, is just one Easter egg in the shoe’s basket. The outsole, which fades from dark brown to clear, has another hidden meaning. More on those later.

All these artisanal touches can only be fully appreciated through Coit’s life story, which is summed up by the words embroidered inside the tongue:

One of Coit’s earliest sneaker memories is a feeling of satisfaction from lining up 14 pairs of off-brand shoes from the discount retailer Kinney. In elementary school, he graduated from those bobos to a navy Nike Cortez with a white swoosh. They doubled as his hoop shoes, and the nylon ripped easily, so young Roland cut the fringes off the tears and sewed them up with navy thread.

By high school, Coit was known for having the latest everything – not just Jordans, but also kicks popularized by other Nike athletes with signature models such as Ken Griffeys, Deion Sanders, and Bo Jacksons. And, of course, the Zoom Turf series that Detroit Lions star Barry Sanders wore zigzagging through tacklers in the now-demolished Pontiac Silverdome. Coit knew the release dates, so he would skip school with the homies to cop, then wear them back to school that day. This was the late 1990s, when today’s retros were first released, so every drop was a revelation. When Coit stepped on the court for a high school basketball game wearing never-seen-before white/Columbia blue Jordan 11s? Those are the types of stunts that make kids famous.

Coit went to Eastern Michigan University, became a DJ, and started playing around with rapping. His parents struggled to pay tuition, so he dropped out and bounced around jobs, feeling adrift, and ended up cleaning rental cars for Enterprise. Sneakers remained an obsession, satiated by 10-hour drives to New York City. People in Detroit lost their minds when Coit started wearing Bapes, the patent leather Air Force 1-lookalike made by A Bathing Ape and popularized by Japanese streetwear legend Nigo. His first flip came when he bought two pairs of $225 Bapes and sold one of them for $450. He didn’t care about maximizing the resale – just funding his own fly feet.

When the Heineken Dunks dropped in 2003, he searched and searched until a kid at Michigan State said he’d let them go for $200 – a lot of bread for a rental car cleaner.

Coit asked his girlfriend, Sakennia, what he should do. “She said, ‘You don’t make a lot of money, but you work hard every day. Sometimes, no pun intended, you got to just do it. Go buy them. We’ll figure it out.’ ”

They made it official in 2005. The only two pairs of shoes Coit will never sell are those Heinekens and the grey and pink Bape Stas he wore at his wedding.

As Coit’s DJ gigs piled up, he became a fixture in the Detroit hip-hop community. But he still needed that car cleaning job at Enterprise, which he hated. After a wealthy white man left his wallet in a rental, Coit returned it and asked for advice. “Find something you love, something you would do for free, and learn how to make money at it,” the man said.

That led to a partnership with the Burn Rubber store in Royal Oak. What Coit brought to Burn Rubber was the same element Jordan, Griffey, or Sanders brought to Nike – authenticity, flavor and soul. He also brought his friends in the Detroit rap scene: Guilty Simpson, Slum Village, Elzhi, Marv Won, Fatt Father, Phat Kat, an up-and-comer named Big Sean. They frequented the boutique and wore Burn Rubber tees or hats on stage, as did Coit as he performed under his new rap name: Ro Spit. Then Burn Rubber gear started appearing on stars such as Pharrell, Wale, and Mac Miller. In 2007, Coit and original partner Rick Williams purchased the store.

A few years later, entering his 30s and fatherhood, Coit conceived of a sister store for guys his age: more upscale than graphic tees and Foamposites but more stylish than khakis and Cole Haans. He tried to name it “BR by Burn Rubber,” but was blocked by Banana Republic. So like a producer denied a sample clearance, Coit flipped it.

Coit’s first name is Roland, which starts with R. Every student of rap knows “The R” is Rakim, aka “The 18th Letter.” B is the second letter of the alphabet. Banana Republic won’t let us use BR? Aiight, we’ll call the store Two18.

Coit extended the Two18 concept to the entire brand identity. The logo is a Black Raven. The color scheme is blue and red – hence the piping on the new 2s – which fill the double-slash logo accents behind the bird. Coit alchemized rejection into something organically fresh and original. That’s hip-hop.

But the post-,coronavirus pandemic relaxed adult wardrobe was ahead of its time in 2013. The Two18 store launch failed miserably and almost bankrupted Burn Rubber, too. A year later, the bills were still coming in, Williams departed, and he wondered whether Enterprise was still hiring.

“The name Two18, at that time, felt like tasting throw-up in your mouth,” Coit said.

Burn Rubber barely survived and moved to a new space. When the pandemic hit, it was a blessing in disguise: Not only were people cooped up at home with stimmy to spend, but after George Floyd was murdered while in police custody in Minneapolis, sneaker brands started showing more respect for small Black-owned boutiques.

Shoe companies often give most of their premium product to well-known boutiques in major cities, which might get 600 or 700 pairs of a hot release, while Burn Rubber gets two dozen. In 2020, the playing field started to level out.

“Maybe these other stores were doing better business or doing something different than us,” Coit said. “I don’t know, but that’s where the systemic racism happens, when the guy who owns another store comes from a long line of business owners. He had money, where I just had an idea for a store.”

Suddenly, Burn Rubber was getting 70 pairs of new releases – and they sold out almost instantly. In May 2021, Coit’s phone rang with a call from his Jordan Brand rep.

“We want you to design a shoe,” the rep said.

Coit opened the new Two18 last February with support from Nike and Jordan, who are in the midst of a delicate moment in their business. The companies are trying to maintain their connection and give back to the ‘hood, which is the source of everything fly in the mainstream, while simultaneously reducing other retail partnerships and selling direct to consumers online.

Nike and Jordan’s support made it possible for Coit to open the new Two18 in February. In one of the first design conversations, the Jordan people asked Coit and his crew to talk about Detroit. As they described the city and their journey – from rapping in an Eastern Michigan dorm room to releasing albums and touring the country, from cleaning cars to buying them – the phrase “through it all” kept being said. 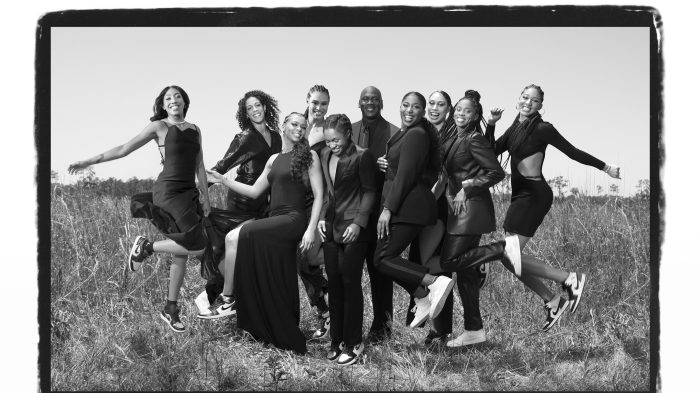 ‘We don’t take this for granted’: The Black women reppin’ the Jordan Brand in the WNBARead now

Now it is manifested inside the tongue of the shoe, surrounded by several sets of numbers inspired by the authenticating engravings on the bridge of Cartier frames. The numbers also are etched into the lace tips, referring to the addresses Burn Rubber and Two18 inhabited as they fought to survive. The blue and red piping is a middle finger to that giant clothing chain, while the colors also accent the clothing collection. And about those outsoles – they change from muddy to clear, an homage to Flint’s ongoing struggle for safe water.

The whole package is art, a remix along the lines of what Pete Rock did to “Down With The King” or what Kendrick Lamar contributed to “Mask Off.” Coit will get 5,000 pairs, set to retail for $200. Some people are already calling them the sneaker of the year.

“I still haven’t had a chance to sit back and say, damn, this is crazy,” Coit said. On his feet were a pair of his very own Jordans, a testament to the real things that can happen when the world comes calling for our culture.