When looking through old imagery of the NBA’s great title runs, there are always accessories that stick out: the confetti falling over the celebration on the court, the champagne bottles awaiting the players in the locker room and the rare cigars lit in honor of their season-long exploits.

Oversized with vivid leather panels that feature details encapsulating the stars’ storied careers in Chicago and Los Angeles, along with patches commemorating each year’s title run and each city’s skyline, the jackets have taken on a mythical status in hoops culture.

To honor that legacy, Converse has teamed up with streetwear culture brand Chinatown Market to reimagine two of the company’s most beloved sneakers – the Chuck Taylor and Pro Leather – with design details from the jackets that celebrated the Chicago Bulls’ and Los Angeles Lakers’ title runs of the 1990s and early 2000s. 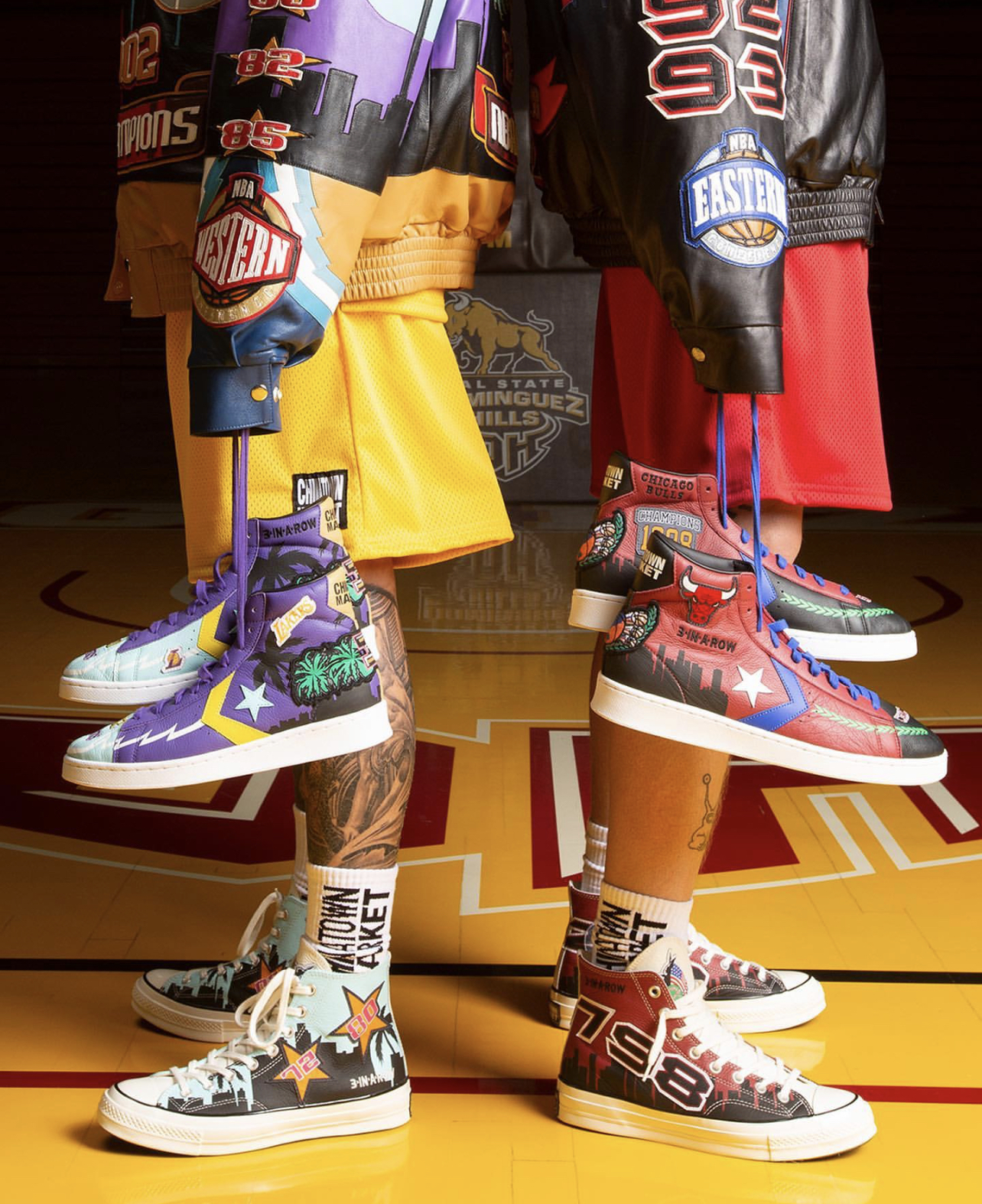 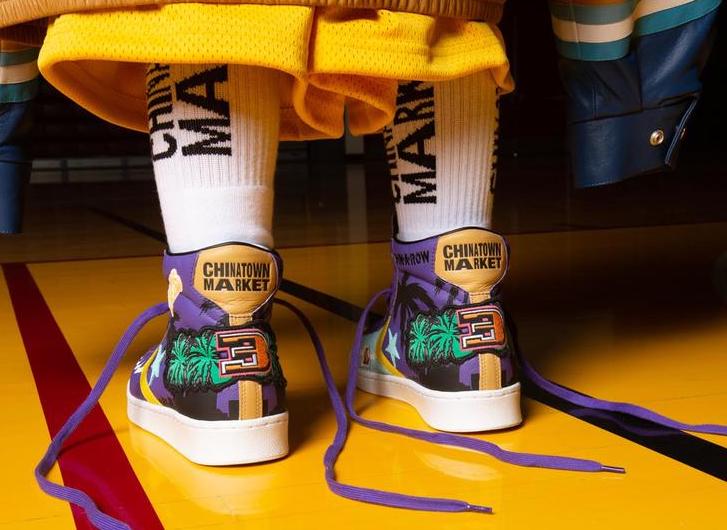 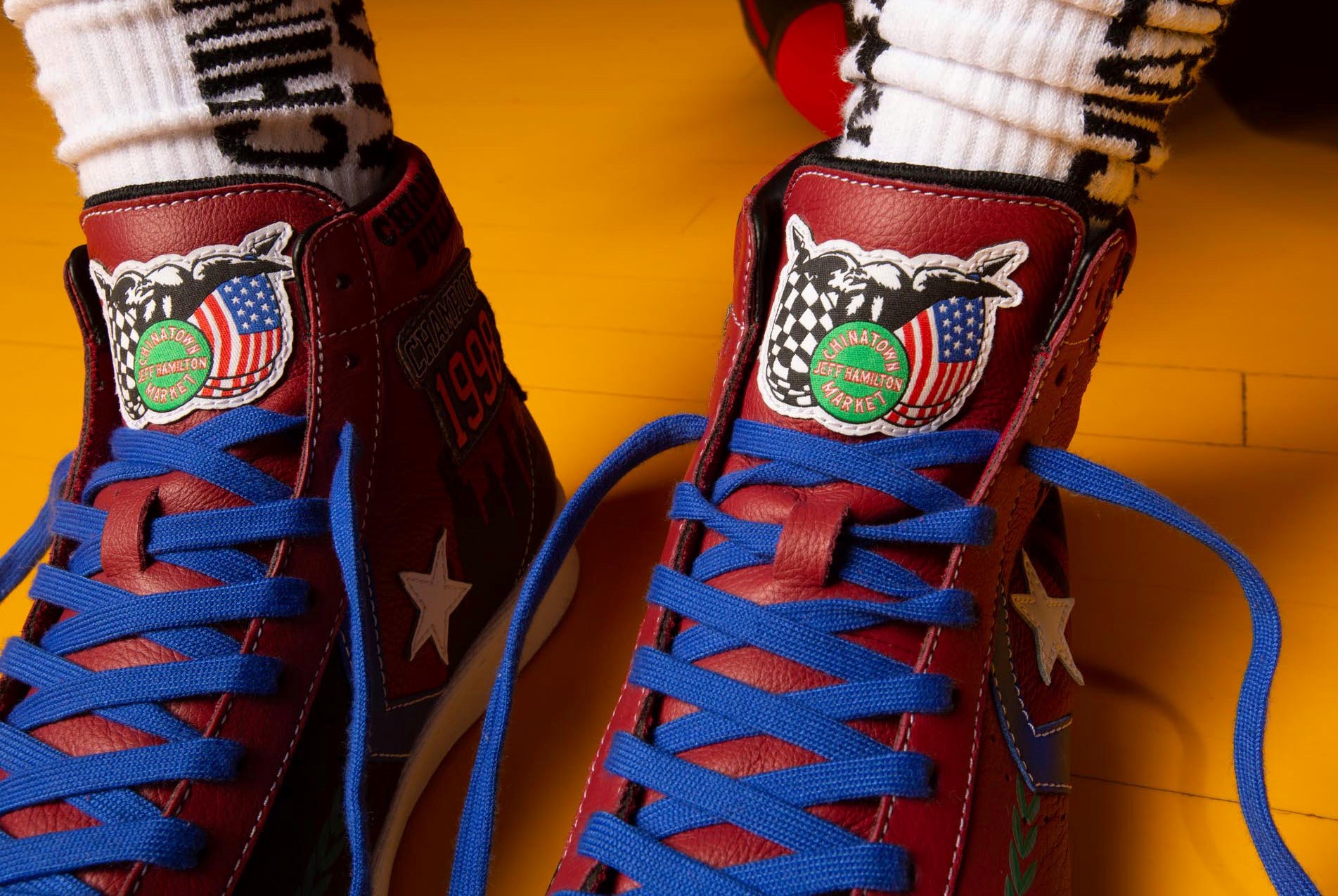 “The inspiration for this collaboration started back when I was a basketball fan as a kid,” said Mike Cherman, founder of Chinatown Market. “I could go to the mall and buy vintage jerseys and classic NBA nostalgia as a kid, but I could never get my hands on a Jeff Hamilton jacket, let alone know where they came from at the time.”

In both cases, they came directly from Hamilton, who attended every one of Jordan’s NBA Finals games throughout the ’90s and was also there for the Lakers’ title-clinching fourth game of the 2002 Finals. Coincidentally, Bryant wore Jordan’s No. 23 home Bulls jersey to the Finals game that sealed the Lakers’ three-peat.

The longtime fashion designer was born in Morocco and spent his teens in Paris. He launched Guess For Men in the U.S. during the 1980s before going on to create custom leather jackets for the biggest celebrities and athletes of the era.

Jordan was perhaps his most frequent customer. Thanks to an introduction from Magic Johnson, Hamilton began creating jackets for the Bulls star just after his rookie year in 1985.

Along the way, Hamilton worked with pro sports leagues on licensed partnerships, leading to the creation of his handcrafted and hand-delivered championship leather jackets for Jordan, beginning in 1991. He’d often sit in the stands rooting for the Bulls, with the celebratory jacket folded in a bag on his lap. As the clock ticked away, he would be ushered past arena checkpoints by Jordan’s security team to make the delivery.

“Where’s my jacket?!” Jordan would beam upon seeing Hamilton.

Players don’t receive their championship rings until opening night of the following season some five months later, so Jordan began to cherish snagging his championship jackets just after the final buzzer.

“It was a dream of a lifetime – originally meeting Michael, him asking for a jacket,” said Hamilton. “Being in the locker room during those iconic times was something I could have never imagined.”

This creative celebration of a basketball culture moment serves as an example of what to expect from Converse, according to company representatives. The brand recently relaunched its basketball category and counts Kelly Oubre Jr., Draymond Green and Shai Gilgeous-Alexander as NBA endorsers.

“On the heels of the nostalgic docuseries The Last Dance and the NBA’s impactful bubble, which brought a 17th championship to the city of Los Angeles, Converse’s collaboration with Chinatown Market serves as an energetic bridge between then and now – a story of champions rooted in the expression of the game today,” said Ron Johnson, general manager of global basketball for Converse.

Operating under the Nike Inc. umbrella since 2003, the nods to both Bryant and Jordan come naturally for Converse, with the company collaborating more frequently in recent years with Nike Basketball and Jordan Brand on multishoe packs and limited-edition collections.

When Chinatown Market got started on the project, it discovered that Hamilton’s artwork files for the original jackets didn’t exist, leading its team of designers to re-create the patch graphics from scratch to place atop the sneakers. There will be two sneakers for both the Bulls and Lakers released, with each Chuck Taylor pair priced at $120 and each Pro Leather pair retailing for $150. 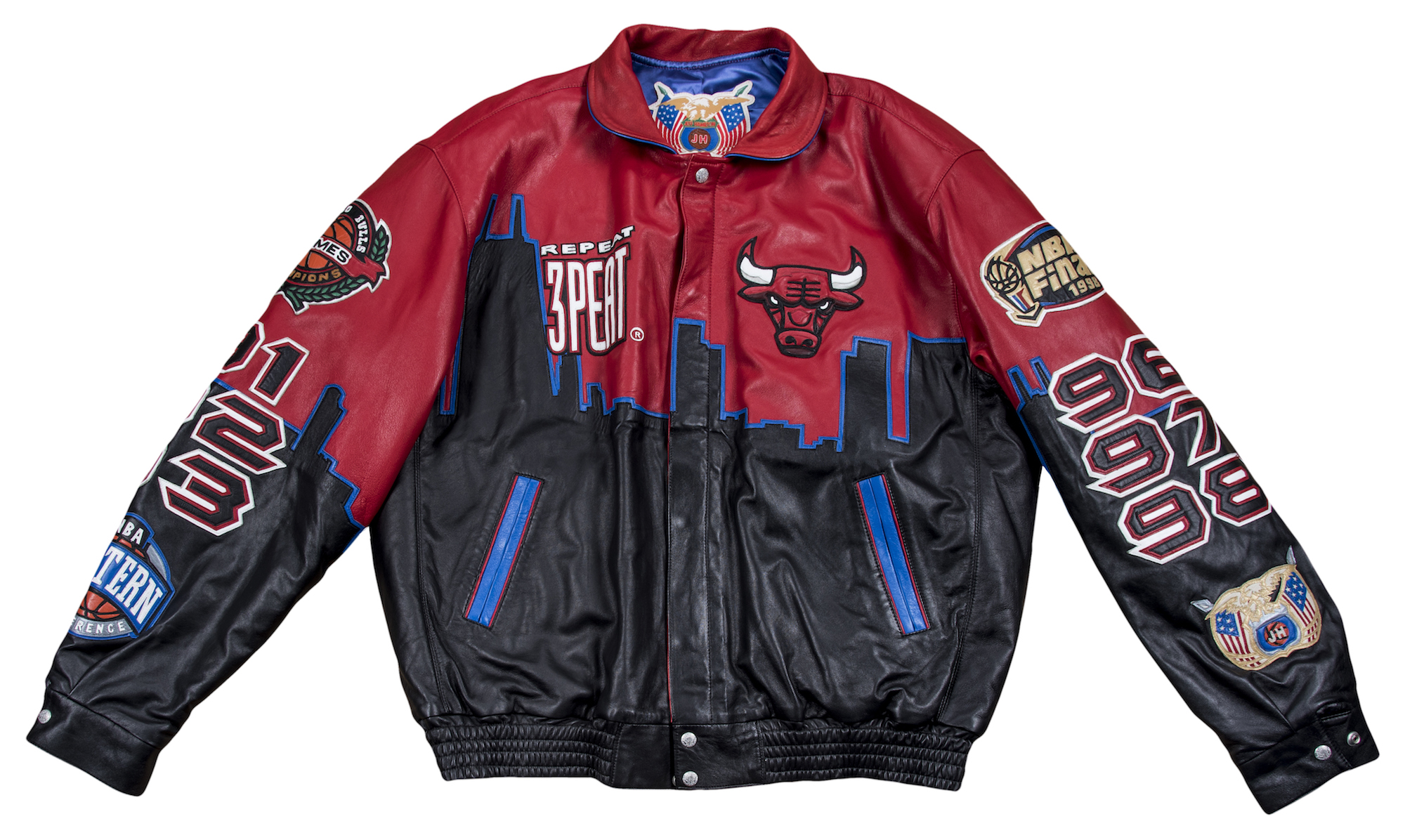 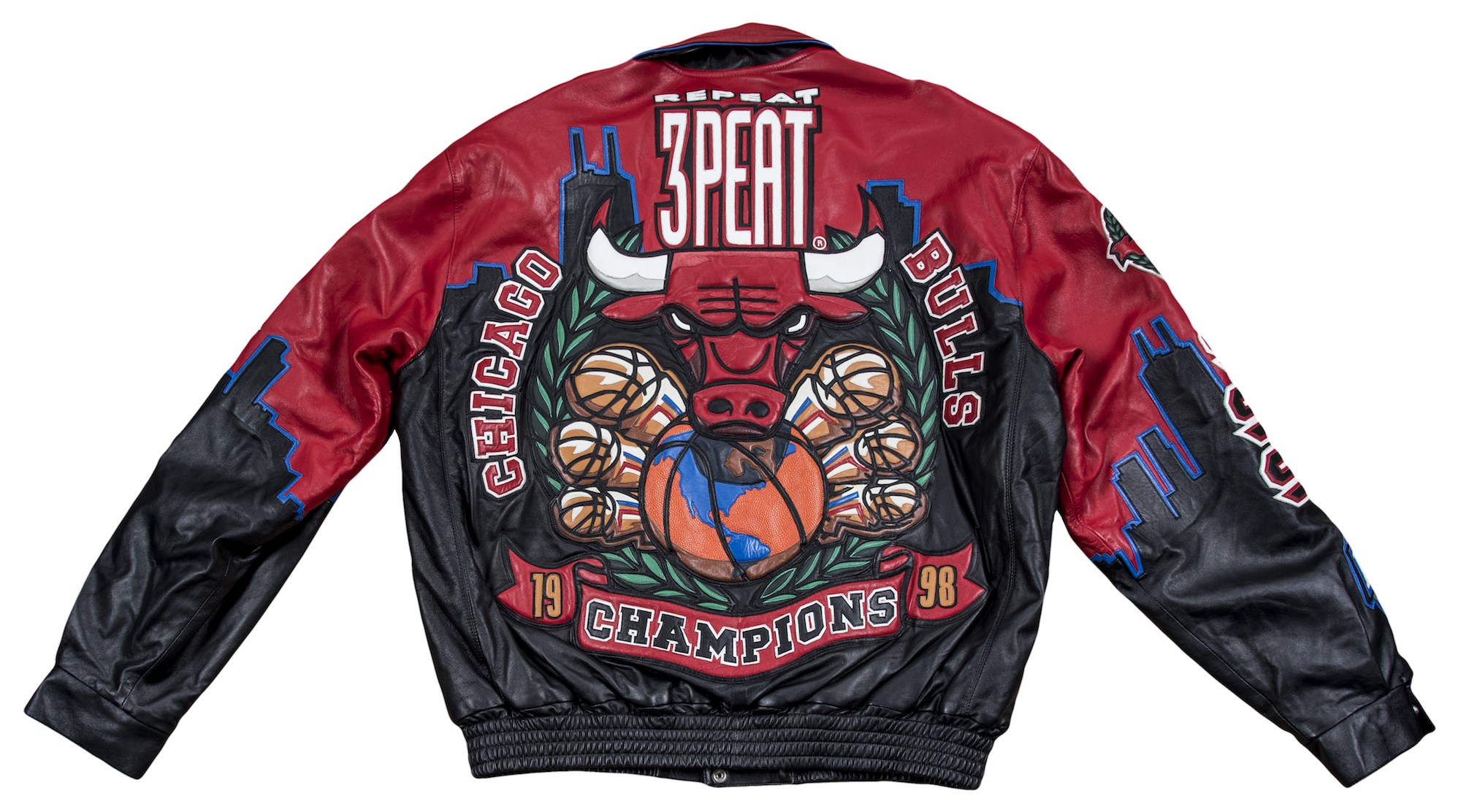 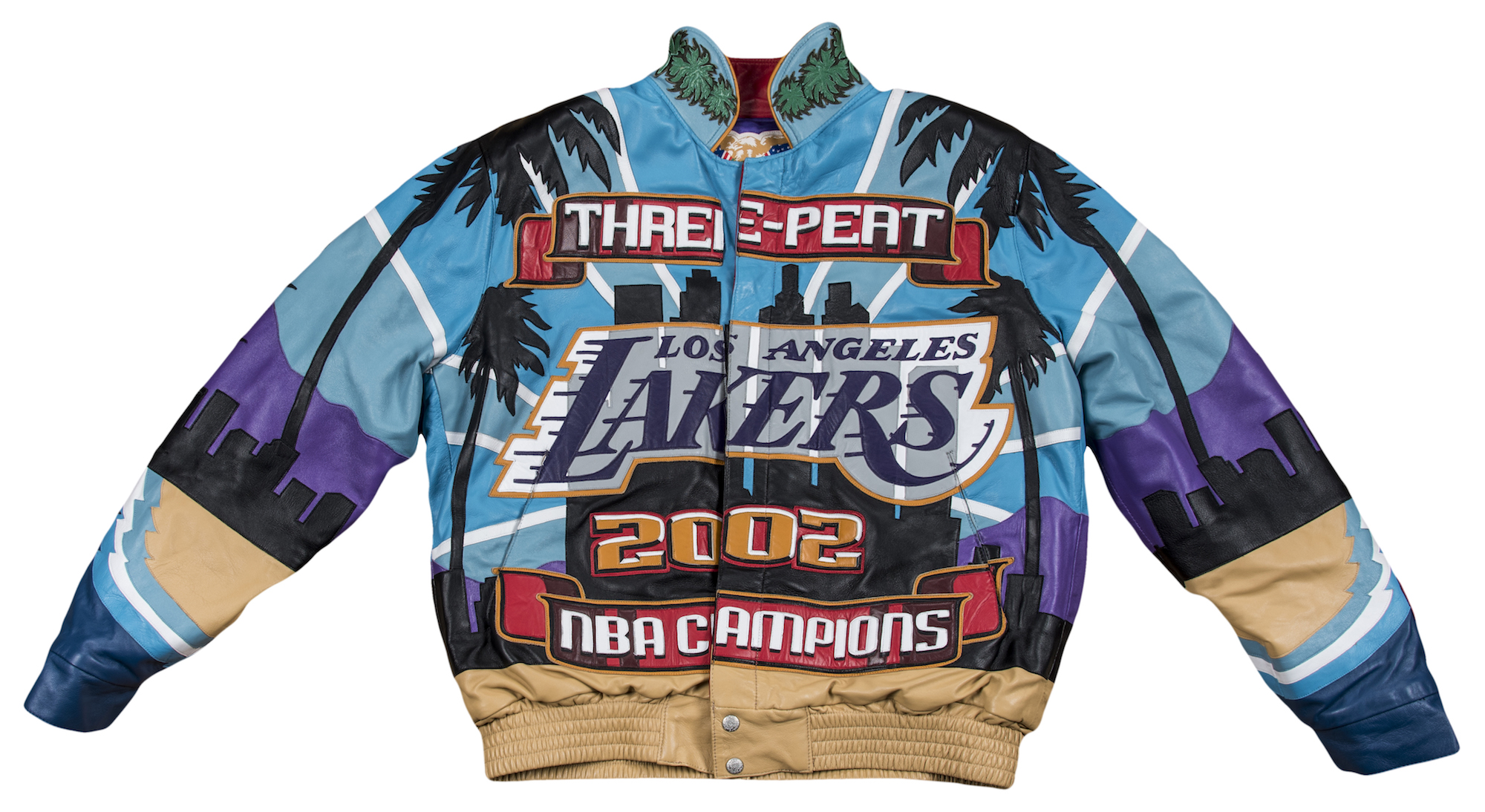 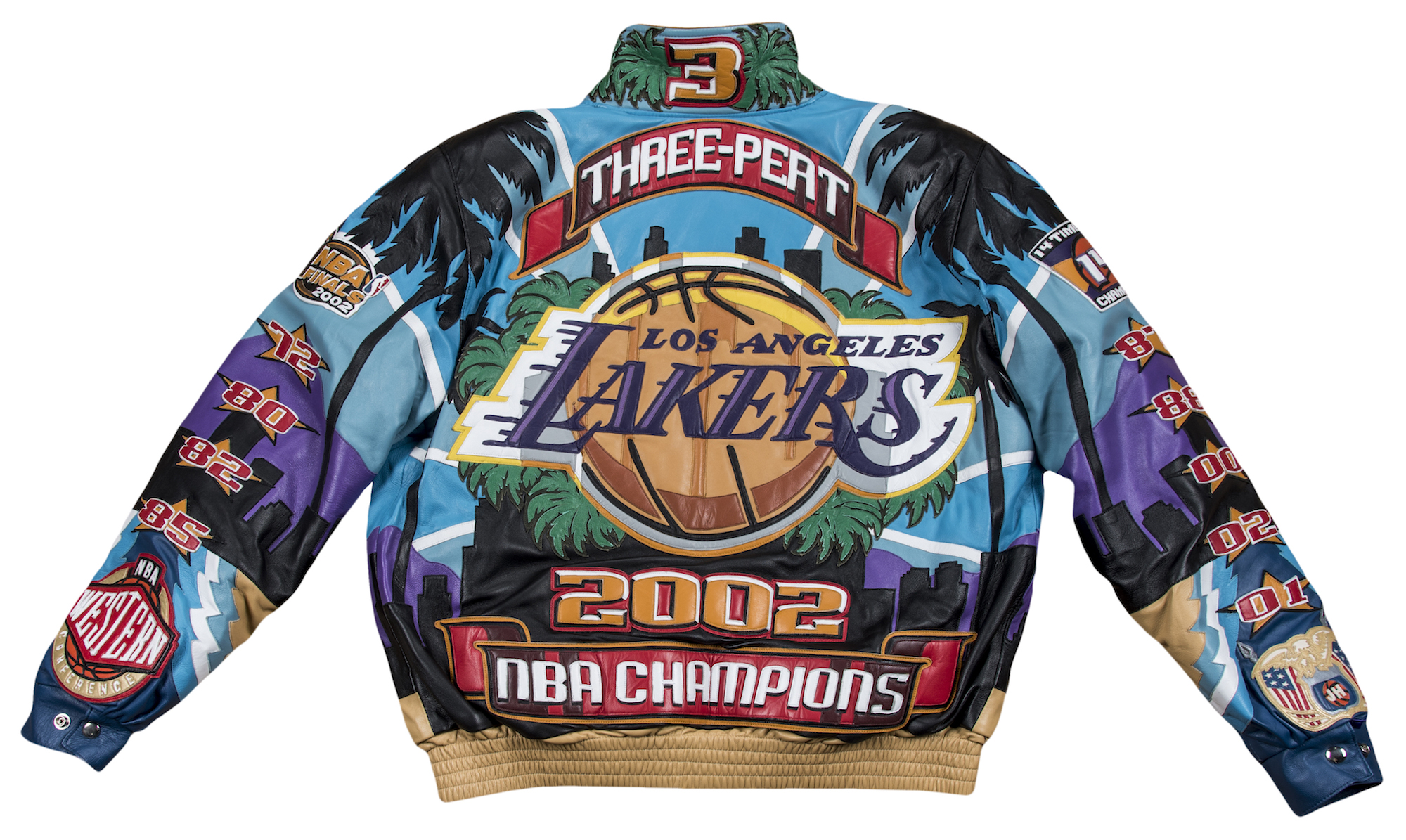 Dubbed the “Repeat 3Peat,” the split red and black Bulls jacket originally featured oversize patches along each arm of the official 1998 NBA Finals logo and a custom crest declaring “6 Times” each positioned above the title years and the Eastern Conference and Hamilton logos.

“I think it is my most iconic jacket,” said Hamilton.

Royal blue accented the heights of the city’s skyline, seen now in the laces and accents along the new Pro Leather model. The years “91 92 93” and “96 97 98” each wrap around the collar of the Chuck Taylor sneakers. Former Bulls player Dennis Rodman, who was signed to Converse during the late ’90s three-peat, recently helped to unveil the new designs. 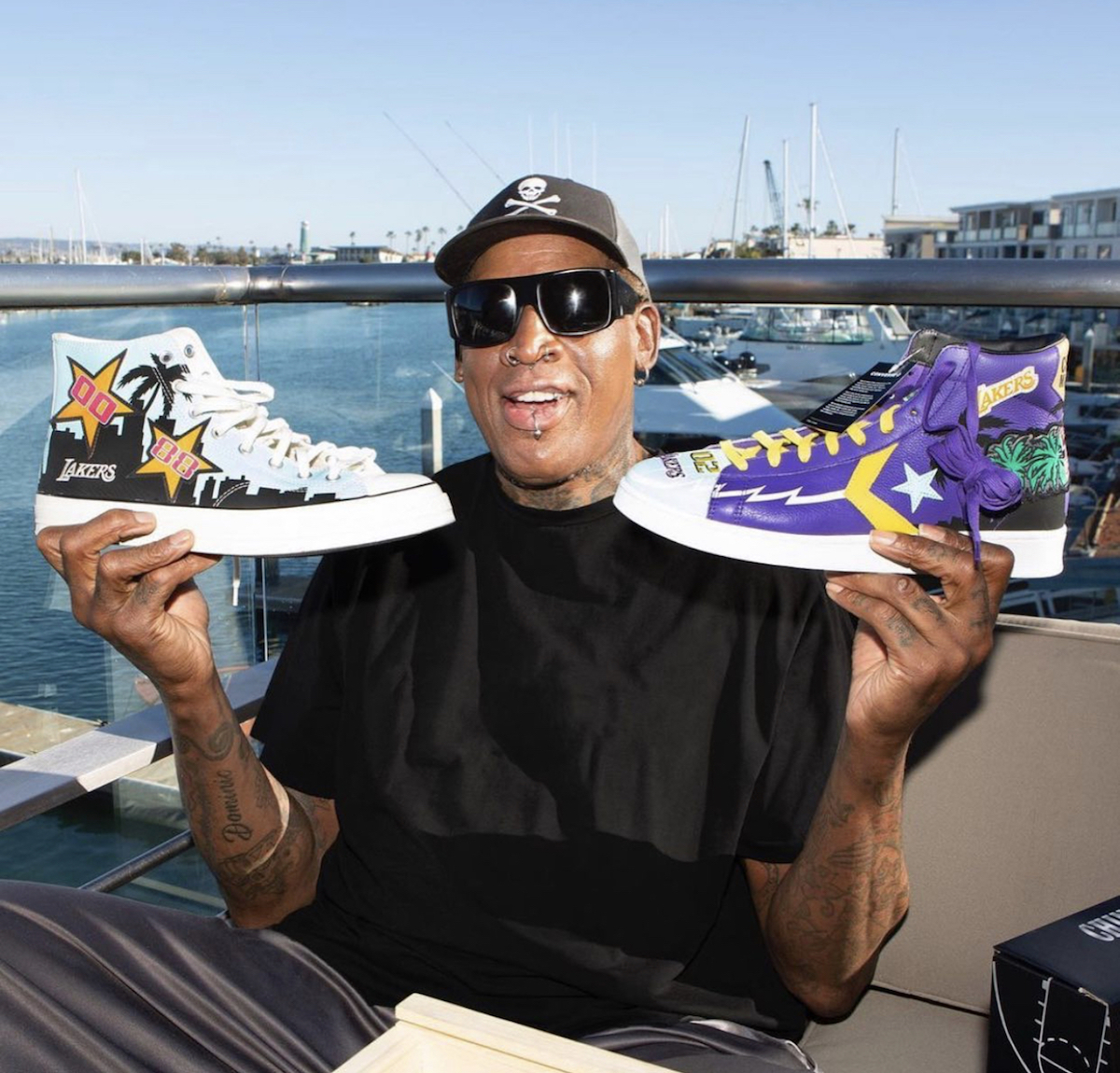 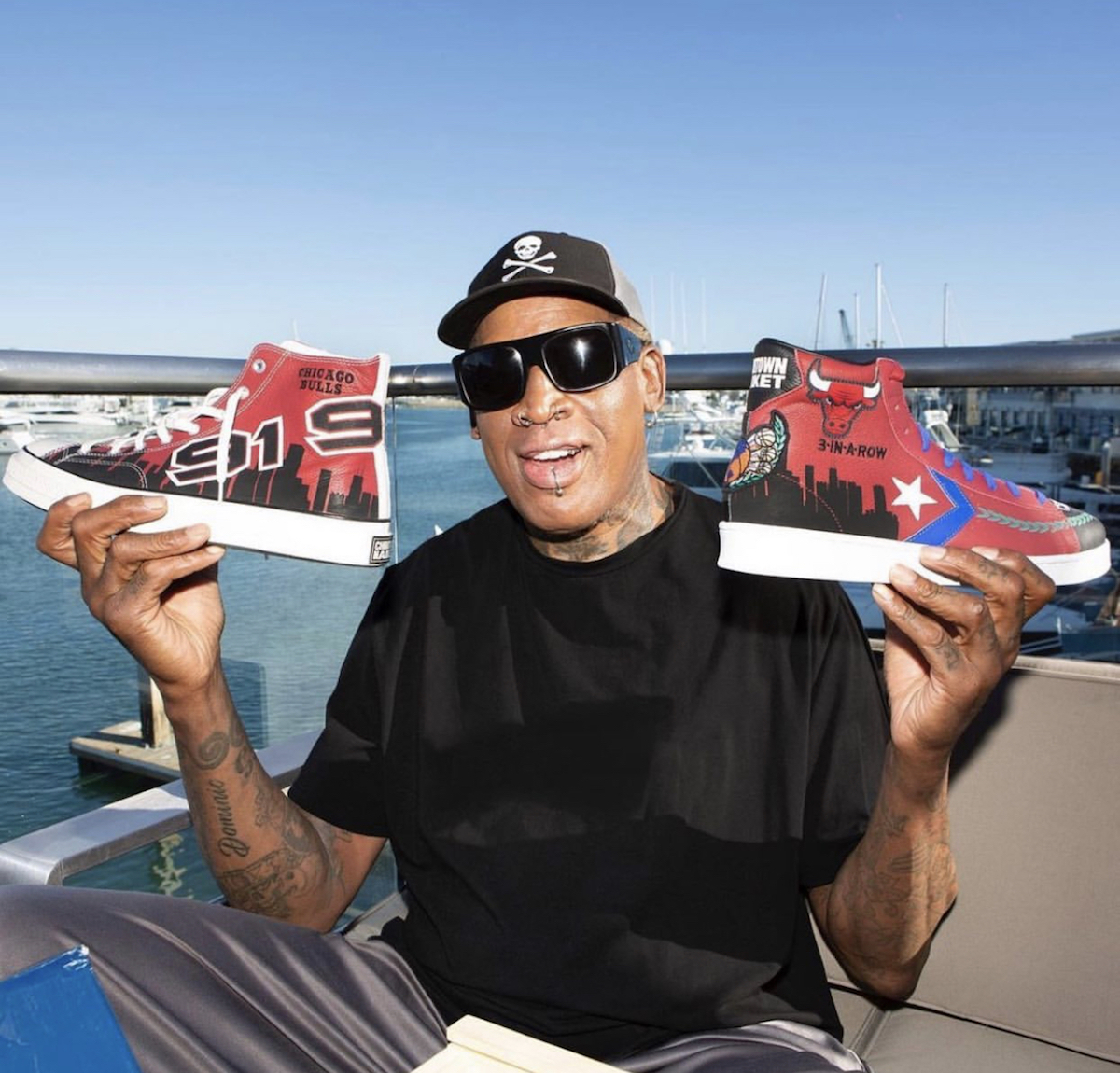 “The beautiful thing about both the Pro Leather and the Chuck 70 was the open canvas they provided to allow us to really make these sneakers feel like miniature versions of the jackets themselves,” said Cherman.

Just four years after Jordan, Bryant achieved a three-peat of his own alongside Shaquille O’Neal, with his radiant smile in his multicolored Hamilton jacket making for instant classic images from the early chapter of his career.

The Lakers jacket was decidedly more California, with bright blue skies and palm trees depicted along the top of the jacket, and a sand-colored lower portion representing the city’s beaches.

When put on the spot, the designer says the Jordan jacket ranks at the very top, followed by the design made for Bryant, and at third, the full “NBA at 50” collection of two-tone leather jackets that the league commissioned for all 50 honorees at the 1997 All-Star Weekend.

Hamilton recently renewed his license with the NBA, creating a 2020 championship jacket for the Lakers that mirrored the colorful 2002 edition that Bryant is so closely associated with. The newest limited edition runs for $5,000 apiece.

With Hamilton’s work now celebrated by several eras of champions, and his custom requests experiencing a resurgence in recent years, such as the $7,000 “Farewell Mamba” jacket made for Drake and worn at Bryant’s final All-Star Game in Toronto, his designs are being recognized through a new medium with this upcoming Converse collection.

“These jackets have been the proudest moments of my career,” Hamilton said.