Is Andrew Wiggins committed to Minnesota?

10:07 AMMy God. That Bachelorette finale was too long. Your boy fell asleep on it, took a nap, woke up, AND IT WAS STILL ON. Congratulations, Bryan. I hope Rachel and your cheek implants live happily ever after in paradise.

Bullying is an awful problem. In terms of schools, administrators and teachers can do their best to curb it, but there are always going to be incidents. One such scenario unfolded in a Cincinnati school bathroom, and an 8-year-old ended up killing himself at home in January afterward. Now, those parents are suing the school district. Child suicide is genuinely one of the most disastrous situations that any community can face, and the pain basically never goes away. The kid’s parents are suing because they weren’t initially told about the nature of the situation.

It’s remarkable how quickly perception can change reality. As soon as this nation decided that we were OK with people smoking or consuming marijuana in one way or another, suddenly it became not only cool but also a luxury item. Of course, we conveniently get to ignore all those people who we threw in jail for years, namely black and brown faces, for doing the same thing. A Harvard MBA is trying to build the “Hermes of cannabis,” and our attorney general is still talking about crackdowns. 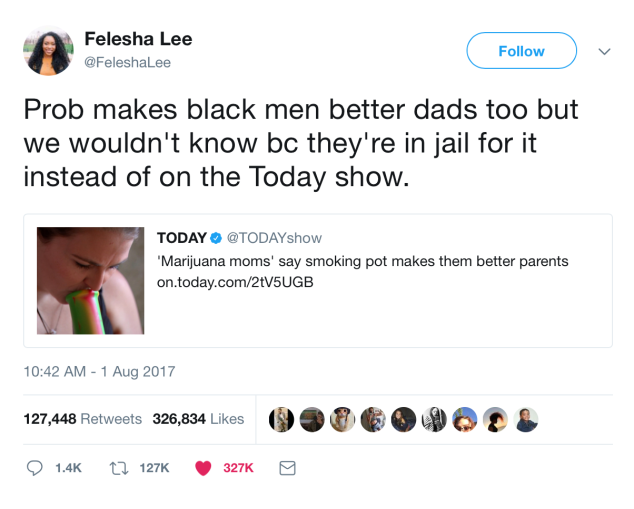 When I covered softball in college, I was struck by the camaraderie. The girls on the teams always had chants for each player, no matter who was at the plate. With all that time spent with reps and practice, on the road, etc., you get pretty tight. That in many ways is the fun part. Gooning with your teammates is basically why you sign up. So when a girls’ softball team flipped the bird on Snapchat during a tournament, it was funny and harmless. Nope! God forbid some young girls get to have some fun! They got kicked out of the tournament, which is wrong.

Andrew Wiggins is about to get PAID. You know how I know? Because the Minnesota Timberwolves’ owner said so. Not the coach, not the general manager, not his agent — the owner of the team. That’s about as good an endorsement as you can get. You might remember that his name was in discussions when trade talk with Kyrie Irving was swirling, which would have been interesting considering he was once the Cleveland Cavaliers’ No. 1 overall pick. That said, the owner wants to know that Wiggins is committed to Minnesota. Yeah, that’s not quite how this works.

Coffee Break: The 808 drum machine is one of the most iconic instruments in history. Don’t believe me? Well, they made a whole documentary about how its sound basically revolutionized music. Now, Roland is releasing a cheaper version based on the original, which is good news for producers all over the globe.

Snack Time: Monday was the 10th anniversary of Barry Bonds breaking Hank Aaron’s home run record. But people forget how good of a hitter he was. Seriously, let’s remember the 2004 season.

1:18 PMHey, gang, I’m back from the West Coast and Connecticut after a long week hosting Mike & Mike and finally making my debut on SportsNation! It was a really fun experience, and I’d like to thank everyone involved.

I can turn on CNN & see black folks get terrorized and brutalized and not get justice. Don't need to spend $15 at a movie theater for that. pic.twitter.com/ODirs32rHy

Google has a bit of a diversity problem. And by that I mean the people who work there don’t love the idea of mixing things up just for the sake of it. So much so that one employee sent a rather scathing and completely idiotic memo to the company about why men and women should not be treated the same in the workplace, citing biological differences and abilities, which is archaic. Tech gets a bad rap for being too bro-ey, too white and too exclusive, and now we know exactly why. This is a horrible look for the company.

When it comes to a life in baseball, Don Baylor lived it. He played 18 seasons in the big leagues for six teams and managed for nearly 10 more for two others. He was an All-Star, a World Series champion and an American League MVP. He died Monday at the age of 68. He wasn’t the flashiest dude, and certainly wasn’t a superstar by any stretch, but his name and his work around the game were a constant for fans of a certain era. Oh, and he also is one of four people to win both an MVP and a Manager of the Year award.

Working for certain bosses can be tricky. Some are mean, some are more kind, but ultimately, you’ve got to do what they ask, because that’s how it works. But what about extracurricular things? If the boss has a holiday party, are you obligated to go? Would you ever consider asking one to attend your wedding? The relationship can get weird if you go too far, but also, you want to be friends with the person signing your checks. FiveThirtyEight asks an interesting question: Is it fair to make everyone in the office pitch in for a gift to the boss?

Monday night is the season finale of The Bachelorette. It’s been a long season, and we’ve come quite a way since Rachel Lindsay was first named as the star. We’ve dealt with racist contestants, awkward parental relationships and a lot of dudes just being real jerks. But that’s the show, and we sort of love it for all that. Now we get to see who she’ll pick, and there doesn’t appear to be any real front-runner. I imagine this will be an extremely well-watched show and the first black Bachelorette will definitely be making TV history.

Coffee Break: HBO’s attempt to recreate a world in which slavery didn’t end has not gone well. The creators of Game of Thrones have gotten all sorts of backlash for a show that was titled Confederate, and the detractors have been vociferous. Ta-Nehisi Coates says we should not be giving them the benefit of the doubt with this program.

Snack Time: Everything Beyoncé does is news in these parts, so when she makes a video of just her and her squad roller-skating, you’ll definitely need to see it. This looks rather fun.

Dessert: My love for Cardi B knows no bounds. Check her out rocking with Migos like a true boss.

12:19 PMWhat up, gang? I’m in Los Angeles right now, and Thursday night I went to see the premiere of a show called Comrade Detective from Channing Tatum and it’s funny. Anyway, I’ll be on SportsNation Friday. Tune in, kiddos.

Friday is Barack Obama’s birthday. He’s moving closer to 60, and he’s living his best life. I wonder what he does on his born day. Can you imagine what his notifications and texts are like? You were America’s favorite and one of the most hated president for eight years, now you’re out of office AND you have a summer birthday? His phone is going to be buzzing heavy for a legit 24 hours. It’s also his first birthday since he left the White House, so you KNOW it’s gonna be lit. And because she’s the absolute best, Michelle shared a throwback picture for the ages. I love this family.

One of the difficult things about police work is consequences. Our judicial system is not set up to punish people in positions of authority unless it is a widespread, consistent and documented abuse of power. And even then, it’s not easy. It’s legitimately hard, due to the way things are structured, to fire an officer and keep him out of law enforcement going forward. In fact, after termination, quite a few appeal their cases and make their way back onto the force. Check out this investigation into the numbers and reasons as to why that occurs.

I love Aziz Ansari. There’s just no other way to put it. Between his TV work, his comedy, his book and basically everything else, my man is just dope. Remember when he showed up in the Otis video and people freaked all the way out? That was just another Tuesday for your boy. And this latest interview he did with GQ reveals that he owns a rare painted portrait of Soulja Boy, which is basically the most amazing thing of all time. I love the fact that it’s all really come together for him.

The long fight between Charles Oakley and the New York Knicks is over. A while back, the franchise legend decided he wanted to put hands on the team’s owner, or at least try to, and he ended up getting thrown out of Madison Square Garden by six dudes. Then, owner James Dolan banned him from the arena. So, they ended up in court. Now, Oakley has accepted a deal to not go to the facility for a year, but left open the possibility of civil charges. Fighting a retired man with nothing to lose in court for his dignity is not a winning battle, but good luck, Dolan.

Coffee Break: I just want to give a shout-out to my man Joel Anderson, who joins us at ESPN to cover college football and basketball. Joel is a personal friend and a great dude. He also played football at Texas Christian University and is a great Twitter follower. I’m so happy he’s part of the team and I say that with no shame whatsoever.

Snack Time: Nardwuar and D.R.A.M. seem like those two dudes who ended up getting stuck with each other as college roommates and it ended in a beautiful relationship that no one expected. This interview is total gold.

Dessert: Only musicians can make amusement parks seem this fun. Lil Yachty is having a great summer.

Dave Chappelle ain’t what he used to be

12:43 PMClinton Yates is not here. He’s currently watching The Curious Case of Benjamin Button to find clues as to how White House senior adviser Stephen Miller is only 31.

Things that make you think …