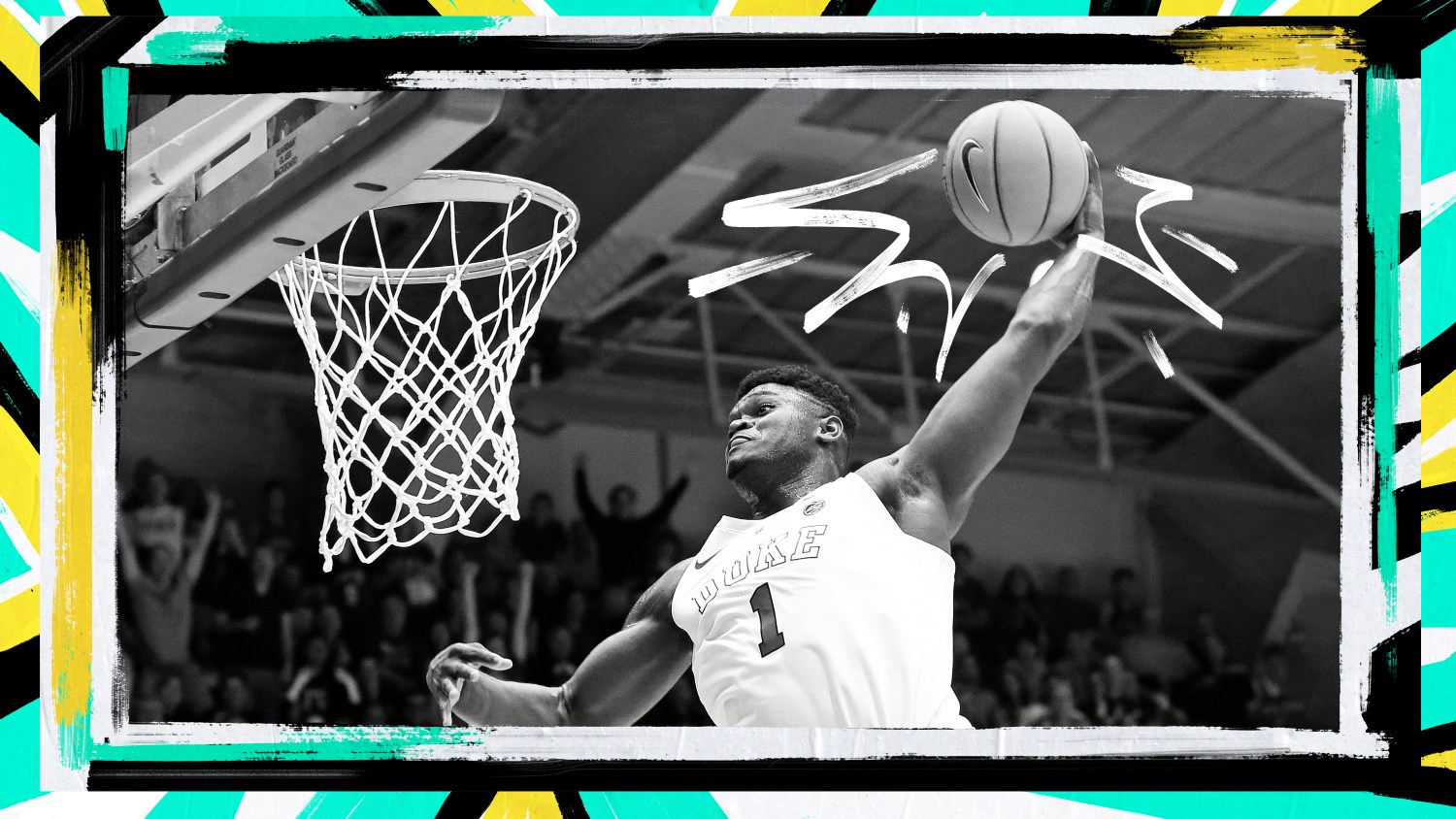 Former foes, including a viral sensation, recall their early battles against Zion

Bryson Bishop was used to being physically overmatched as an eighth-grader starting on the Oakbrook Prep varsity basketball team in South Carolina. But during a February game in 2017, the 5-foot-6 point guard was slightly stunned as his coach pointed toward the stud who was completely dominating their team and uttered these two words coming out of a timeout:

With those instructions, Bishop walked over to him: Zion Williamson, who was in the process of becoming the nation’s best player as a junior at Spartanburg Day School in South Carolina.

Giving up well over 100 pounds, Bishop assumed his assignment by aggressively clapping seven times in the face of Williamson. It was a slight cover for how he was really feeling going up against the Thanos of high school hoops.

“I was nervous,” Bishop said. “I had watched all the highlight tapes, and you don’t get to see a big guy like him every day. I was clapping to hype myself up.”

A box-and-one defensive scheme is what brought Bishop and Williamson together that day, and the assignment likely lasted no more than a couple of possessions. But that “encounter” was immortalized by one of the many websites set up in Spartanburg to capture Williamson’s every move, attracting more than 5 million views on YouTube with the headline hyping the kid who “REFUSED To Back Down From Zion Williamson.”

In a game in which Williamson scored 36 points in a 78-54 victory, Bishop became internet famous.

“You stand next to him,” Bishop said, “and you realize how small you actually are standing next to someone his size.”

Williamson had a way of making a lot of opponents feel little while playing in the South Carolina Independent School Association (SCISA), a league that featured many of the small private high schools in the region.

It’s not that the league lacks talented players. (The lack of quality competition was a knock against Williamson during his high school career.) Schools in the SCISA have produced players who went on to play at Division I schools, including Wofford and Charleston Southern, as well as many Division II schools in the region.

But Williamson was on another level.

Spartanburg Christian Academy head coach Chris Arp, who played college basketball at Wofford, thought Williamson could play on the Division I level after seeing him for the first time as a high school freshman.

“You could see he was really athletic,” Arp said. “After I saw him, I called the coaches at Wofford and told them they should keep an eye on him. I thought he had the potential to be a really good 2 or 3 in the Southern Conference.”

“On his first possession against us he hits a 3,” Thompson remembered. “A few possessions later they bring it up the right side against our 1-3-1 zone and their point guard throws it up there and [Williamson] gets it and dunks it, and his crotch was in the back of my guy’s head. I looked at my assistant and said, ‘We’re in trouble. This is going to be a disaster.’ ”

That was Williamson as a not-so-big, skinny freshman at Spartanburg Day who had no desire to take over a game and was just trying to fit in. The next season, Williamson stood about 6 feet, 4 inches and had added about 40 pounds.

As Williamson grew, so did the expectations of what he could become.

“He had the added weight, much of it in his lower body, and you thought it would slow him down,” Arp said. “But he’s quicker. And better.”

For Arp, one play stood out in the third game of the season between Spartanburg Christian and Spartanburg Day during Williamson’s sophomore year.

“He got by our defense for a layup, and I’m watching film to see what we did wrong,” Arp said. “I kept rewinding the tape, and I can’t believe what I’m watching: He gets a defensive rebound at the free throw line, takes three dribbles through traffic — boom, boom, boom — and then finishes with a finger roll at the rim.

“That was next-level special.”

After Williamson led Spartanburg Day to its first basketball state championship as a sophomore (and after he tore through the summer AAU circuit), many of the opposing coaches in the SCISA expected him to transfer to a bigger prep school.

Even his high school coach at Spartanburg Day, Lee Sartor, thought there was a chance his once-in-a-lifetime player would leave.

“I know he had plenty of invitations to go to other national basketball powerhouses,” said Sartor, now the head coach at Erskine College in South Carolina. “I was amazed that every year when the fall semester came, Zion was sitting in the chair in his classrooms ready to learn.”

On the court, he continued to grow and dominate. The crowds grew, too, and ticket scalping came to Spartanburg as Williamson became the greatest high school basketball show since LeBron James.

“None of us were scared to play against him,” said David Muncy, a point guard at Shannon Forest who’ll play college basketball at North Greenville next season. “We all knew we were playing against someone who was going to be in the NBA. We tried our best to keep him on the ground, but that didn’t work out that much.”

Not when you have an explosive basketball player who was as big as some NFL stars.

“He was the size of William ‘Refrigerator’ Perry with the athletic ability of Barry Sanders,” Thompson said. “I coached against him 11 times and I tried straight man, a 1-3-1, 2-3, 1-2-2, triangle-and-2 and a box-and-one where we fronted him with two guys.

“Any defense where somebody at home watching might say, ‘You should try this,’ we tried it,” Thompson added. “At times we’d pack it in, with five guys having at least a foot in the paint. And we had no luck.”

At Spartanburg Christian, Arp had the 6-foot-3 Jonathan Gaminde as the middle man of the team’s 2-3 zone. Against most schools in the SCISA, that matchup was an advantage for Arp’s team.

Against Spartanburg Day, that matchup was a nightmare.

“I kept a body on him, and my strategy was to not let him get off the ground and not let him jump,” said Gaminde, who also played football at Spartanburg Christian. “I was giving up at least 60 pounds. That didn’t always work.”

Gaminde remembers the time he was chasing a Spartanburg guard on a fast break and had a chance to challenge him at the rim for a block. Instead, he stopped short to box out Williamson, denying a chance at a crowd-pleasing lob dunk.

Unorthodox strategies and gimmick defenses were all methods used to slow Williamson, but he still averaged more than 35 points per game in his junior and senior seasons while physically abusing opponents.

“My kids were bruised. Some had back pain, and there was definitely a lot of ice used after games,” Thompson said. “I never in my life coach for second place, but that’s what I felt I was doing going up against Zion.”

Fortunately for Bryson Bishop, he never spent enough time in the paint in his five meetings against Williamson to get banged up.

But he cherished his opportunity, however brief it turned out to be.

“You go out in warm-ups and you realize how many people are actually at the game with their phones out recording him dunking, and it’s really nerve-wracking,” Bishop said. “Once you get out there against him you have to try to just do your best.”

After playing a starring role in that viral video during his eighth-grade season at Oakwood Prep, Bishop considered transferring to Spartanburg Day. Had he made the move, he would have been a teammate of Williamson’s during Zion’s last high school season before he headed to Duke.

“When I went to the school, I met with him and he was real chill,” Bishop said. “He recognized me from the video.”

After seriously thinking about playing alongside Zion, Bishop instead decided to transfer to Spartanburg Christian.

“It would have been cool to play with him for a year, but I figured when Zion left the coach would leave as well,” Bishop said. “It was just better for me to go somewhere else.”

Which allowed him to continue to play against Zion. Bishop played against Zion five times over the course of his first two high school seasons. He lost all five games, and none of them were really close.

But they are memories he’ll never forget, especially the clapback moment that went viral.

“Some guys would kill to play with Zion,” said Bishop, who is now a sophomore and 6-feet tall. “I actually liked the opportunity to play against him.”