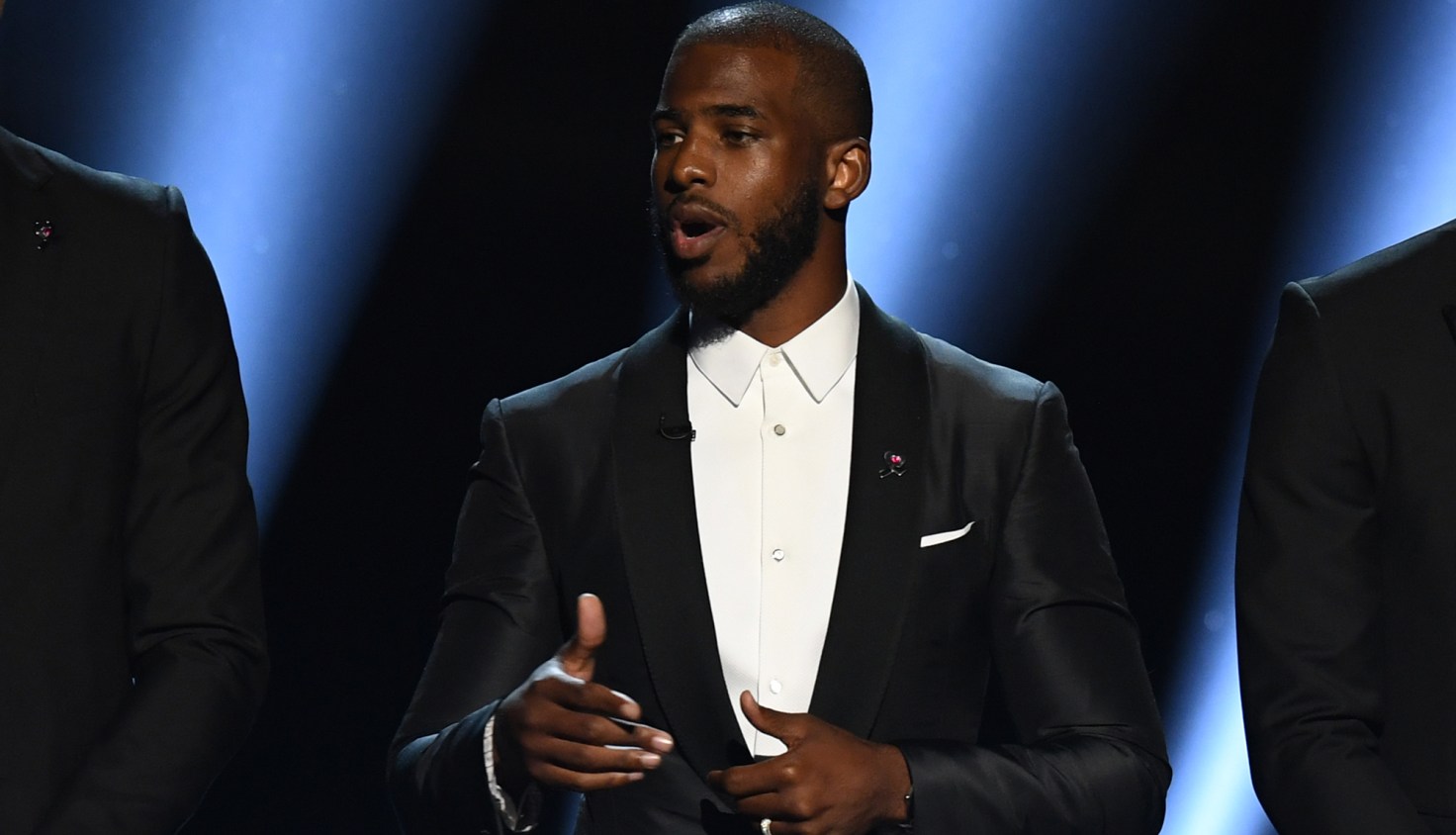 Chris Paul speaks during the opening of the 2016 ESPYS at the Microsoft Theatre on July 16, 2016. Joe Faraoni/ESPN Images
NBA

‘You can never get too comfortable.’

Speaking out at the ESPYS was just the first step, for Chris Paul and others, keeping up the momentum is key

Chris Paul stood on stage at the 2016 ESPY awards flanked by three fellow basketball stars. In the middle of the dark auditorium with only spotlights illuminating the players, Paul awaited his turn to speak.

When it came, he looked directly into the camera while staring into the eyes of his fellow athletes in the audience and into the eyes of the viewers at home who were anticipating the next part of an unscripted speech. Paul made it clear who he was — who they all were: Husbands, brothers, uncles and most importantly, African-American men.

Before concluding his portion, Paul rattled off, in a measured tone, the names of other African-American men who unlike himself no longer had a platform, their voices silenced by fatal encounters with law enforcement.

Men of various ages, backgrounds, occupations and circumstances, but all had their futures snatched away just the same.

The chilling words from Paul as well as LeBron James, Carmelo Anthony and Dwyane Wade were as unexpected as they were impactful. The world saw live the emotions, fears and frustrations of the NBA’s biggest stars in light of these highly publicized incidents.

The display didn’t begin the trend of athletes speaking out about social issues, but it was poignant and stirring considering its magnitude. The frequent and public nature of African-Americans meeting their demise at the hands of those who took an oath to protect and serve had become too painful to ignore, too close to feel numb.

Paul, while at the Boys and Girls Club in Chicago’s Logan Square neighborhood as part of an NBA Cares and State Farm event, revealed the origin of the quartet’s statements.

“Amongst the four of us, we have a group chat,” Paul told The Undefeated. “We have a lot of fun with it just like other people with their group chats, but we also talk about real issues and things that’s going on.”

Anthony’s Instagram post, one calling for athletes to “take charge,” sparked the conversation in the group chat, which led to approaching ESPN and finally, gaining the sports world’s attention for that powerful moment in time.

“The four of us in our respective areas, we’ve all been involved in the community and voicing different things,” Paul said. “It was just the stage and the fact we did it together, it got a little more attention.”

Paul has a family full of members in law enforcement back in his home state of North Carolina. His uncle is a longtime police officer, along with the best friend of Paul’s father. Paul’s father-in-law is a sheriff as well, so the recent shootings of police officers in Dallas and Baton Rouge also struck a chord with him.

The phrase “you can never get too comfortable” is often uttered by Paul’s older brother and confidant, C.J. Paul.

“Just because of that kind of stuff,” C.J. Paul said. “Just because I don’t get pulled over doesn’t mean I won’t feel a certain way. Just hearing about someone else getting pulled over, you never get too far from reality.”

The elder Paul brother listened as Paul bounced the notion of speaking out at The ESPYS, and encouraged it, saying it “set the tone” for the rest of the night.

“Them opening the show like that, it made everybody that got on the stage that night, that had something to say, you couldn’t ignore it. You had to say something,” C.J. Paul said.

As Paul addressed the 70 or so kids at the Boys & Girls Club following the unveiling of a refurbished gym and other amenities the Chicago youth will be able to participate in soon, his brother stood to the side and pondered the long-term effects of the bold move initiated by the four All-Stars.

He compared it to the classic photo from Anthony’s Instagram post, where Muhammad Ali, Kareem Abdul-Jabbar (then Lew Alcindor), Bill Russell and Jim Brown held a summit in Cleveland in 1967 in support of Ali’s refusal to participate in the Vietnam War.

“They got together. With those four getting together, it’ll make more [athletes] get together. Eventually, we’ll start seeing change,” C.J. Paul said. “This is just the beginning.

“[Police brutality] been going on forever, you’re [just] starting to see it more. Now people are really showing it. If somebody tells you it happened, some of it may sound true, some of it may not. If you see it happening, you can’t ignore it. If you do, you’re blind.”

One Hall of Famer who watched with vested interest was former Detroit Piston and Chicago native Isiah Thomas, who applauded the gesture while openly hoping it’s just the first step.

“The next step is for all of us to come together and have a summit and figure out ways to come back to our community,” Thomas said. “For us to invest and reinvest. In housing, education.

“I was proud. It made all of us proud. Just to see athletes really willing to step out on a limb. Not only proud of them, but proud of the media that supported them.”

Thomas has organized events in Chicago that has brought rival gangs together, and during his playing days in Detroit organized a “No Crime Day” in 1987.

“We marched down Woodward [in downtown Detroit] and the impact it had with the community in having athletes show up, be in the community and show their faces, was invaluable.”

Thomas and the Paul brothers agree that changing perceptions of the African-American man is a huge piece to a very complicated puzzle, one that is very difficult for any one athlete or even four to solve.

“You can affect it because you can change perception,” Thomas said. “When you have the ability to change the false perception and narratives in this country, that’s power. Collectively you can; it’s difficult to do it individually.”

When asked what the next step was for the movement, Paul couldn’t speak definitively to it, but likely leans on civil rights leader Martin Luther King Jr.’s words: “Faith is taking the first step even when you don’t see the whole staircase.”

“That’s the thing. Us four, we still talk and try to continue the conversations,” Paul said. “I don’t think there’s one person that knows the answer, but it’s definitely a good conversation.”

Vincent Goodwill is the Bulls Insider/NBA writer for Comcast SportsNet Chicago. He never needed a jumper because he was so quick getting to the basket. Then he turned 30.