This WNBA offseason has been eventful for Angel McCoughtry.

In November, McCoughtry traveled to Africa, where she worked with the NBA Academy. In December, she spoke at a voter rally in Georgia to urge residents to participate in Tuesday’s Senate runoff election. Just two weeks ago, McCoughtry moved from her home in Atlanta to Spain.

“I’m just basically looking for my retirement home,” McCoughtry said. “I felt like this was the perfect place.”

As the Las Vegas Aces’ guard/forward begins the latter stages of one of the greatest careers in WNBA history, she’s focused on enjoying the remainder of her journey. But as seen through her performance last season, triumphantly returning to the league after missing two seasons due to a knee injury, there are plenty of buckets left to get for one of the best scorers in league history.

Off the court, McCoughtry played an integral role in a league that committed its season to social justice. The University of Louisville alumna was responsible for creating the idea of WNBA players honoring Breonna Taylor, who was killed by Louisville police in March, on the back of their jerseys and was a strong voice among WNBA players who urged citizens to vote in November’s presidential election. McCoughtry, who played for the Atlanta Dream from 2009 to 2019, has also joined many WNBA players who have publicly placed their support behind Senate candidate Rev. Raphael Warnock of Georgia.

In a Q&A with The Undefeated, McCoughtry discusses her reflections on this past WNBA season, her desire to expand the WNBA’s footprint in Africa, and the league’s impact on the Senate runoff election in Georgia.

When you look back at your season, coming back so strongly after your injury and then also the WNBA’s off-court impact, what are your biggest takeaways?

I’m going to be completely honest: I was exhausted in the bubble. There was so much going on in the world with COVID and then there was just another person dying, or police brutality, or racism, or social injustice. It was very draining to play in that moment because we were just – we were fighting against all of that. And then you’re stuck in the bubble, you can’t really move around like you want. But I think the best part about it was when you got to play, you could let all that out. All that could come out on the court.

The emotional fatigue of the WNBA bubble Read now

I was really proud of everything we accomplished in the bubble. What I took away was just learning about the women there, their strength and all the ideas they came out with. There’s power in numbers, us coming together. It was cool to experience being under one roof with all the girls and really getting to learn and know them.

A big moment this offseason was your trip to Senegal. How did that trip come about?

When I make up my mind to do something, I just do it. I live freely. I’m adventurous and just live on the edge. I just live like there’s no tomorrow. When I go, when I want to help the youth and things like that, I just go on my own dime. I don’t get anyone to help me. I don’t ask for donations from people. I really just help with my own funds and give back to the community. It makes me feel good. It takes away sadness and depression just to be able to give myself to others.

I worked with the NBA Academy. I met some of the kids. It’s a program called SEED, where they help kids come play over in college in the States. I always want to go to Africa, it’s an amazing experience. It’s nothing like how TV portrays – more people need to be exposed to Africa.

How familiar were people in Senegal with the WNBA?

They know the WNBA. They don’t even care if they don’t know your name, you’re coming, they treat you like a superstar.

I’m working on trying to get a WNBA game in Senegal. They have a new sports facility, which is amazing. A year ago they had the African championships, they had women, Senegal played Nigeria. It was packed out with 16,000 people. That goes to tell you they support women. …

If we can come over there and have a game, give back, learn some history, see the beauty of it, I think that would be great. So hopefully, I’m thinking two years, I want to try to get it done by 2022. I talked to Cathy [WNBA commissioner Cathy Engelbert] about it, our president, and I hope they can really get it done.

It’s really not hard. We have the facilities ready. Let’s pick a date, let’s get the meeting done with which teams you want. Of course, Las Vegas Aces and pick another team. I think because people know Candace Parker everywhere – I’ve gone to Ghana, South Africa, they all know Candace Parker. So I think a Las Vegas Aces versus Los Angeles Sparks would be great. And to really connect with the people there, they need us, we need to do it. I think it’ll be great.

I think the next place that they should do it is in Rwanda. People don’t know Rwanda has a new gym facility as well. It’s safe, crime is nonexistent, it’s the cleanest place you’ll ever see. You could lick the ground. I think that’ll be the next best place. Senegal and then Rwanda. And then of course, South Africa, because it’s South Africa. 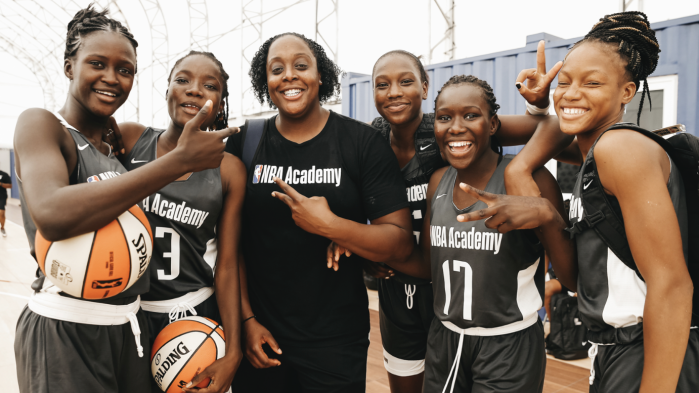 You have roots in two of the most palpable states in this social justice movement. Did your ties to Kentucky and Georgia further engage your involvement in the movement?

Yeah. It’s something with the states where I’ve been very much affiliated and influenced, have had some issues with these things. First Breonna Taylor in Kentucky, and then now Georgia. Two states that were highly publicized. I just had to do my best to support. Me and Donovan [Mitchell] partnered up, we’re donating the money for the sales issued to Black students at Louisville because it’s not many of them. And I always remember that Black students always struggle with tuition. We don’t want them to struggle anymore with tuition.

Then now with just Georgia and us voting, we’re doing everything in our power to get people to vote. Go vote, vote, vote, vote. We turned into a blue state because my good friend, Stacey Abrams, really did a great job getting to those rural areas where nobody goes, people forget about. You got country people who just live their life and just do what they’re supposed to do on the farm. She got those people out to vote for the first time. And because all those people voted, we turned into a blue state.

WNBA players brought Raphael Warnock, a Georgia Senate candidate, into the national conversation in the WNBA bubble. What do you believe that says about the power of the WNBA and its players?

Yeah, I think it was a great idea by Sue Bird and the committee to wear our ‘Vote Warnock’ shirts. That brought a lot of attention and now Warnock is very involved in the WNBA and what we’re doing. Like you just saw [Breanna Stewart] was on a call with him the other day. I really think that the things we’ve done now, we’re just right at the top of when it comes to our voices now. Before that, it wasn’t like that. I think now we’ve proven our voices matter and we can do anything. We can be in politics, we can be in human rights issues. We can be in the community. We have so much power, and there’s power in our voices.

Next season, it’s likely that you’ll move into the top 10 in scoring all time and reach 6,000 points scored during your WNBA career. What does a milestone like that mean to you?

It means a lot. I had no idea I was that close because I missed two seasons. Imagine if I didn’t miss the two seasons. I took off and then I got hurt. So, I think it’s amazing to have accomplished that, to be one of the top.

After you get older, you can tell your motor slows down a little bit, but you want to know that you left a lasting impression. Those kinds of things show I did do the right thing when I was younger, I did work hard, I did give it my all. I don’t have to doubt that because the numbers in those statistics show it.

Have your priorities in terms of how you approach a new season changed at this point in your career?

Yeah, I would say so. When you’re young you just play, everything is about basketball. But when you get older and play, you focus more on the journey. You want to enjoy everything. Before I could go to the Finals, I’m just focusing on, ‘I got to win the Finals.’ But I’m not enjoying the process of being in there and enjoying what’s around me.

I think now as I’ve gotten older you realize, ‘Oh, my God, I don’t have much time left.’ I would say I only probably got five years left. That’s not a lot of time. So I’m enjoying the journey of teammates and the coaches and practice and the camaraderie, the competition and really enjoying everything about it.

Have peace. Peace is the ultimate thing. Peace and happiness and joy. The fruits of the spirit: love, joy, peace, kindness, long-suffering, patience. Have those things and life is beautiful.