On June 21 more than 300 exclusive guests entered the Marquee New York dance and nightclub for the 5th Annual Seed Summer Party, a fundraiser that helps raise money for more than 2,000 students in Senegal, Gambia and the United States participating in the SEED Project.

The West African-themed upscale shindig has become one of New York’s premier summer pre-NBA draft events. The West African vibes, food from celebrity chef Pierre Thiam, and an exclusive private auction, were all in the name of fun and philanthropy.

The SEED (Sport for Education and Economic Development) Project is an international nongovernmental organization that uses sports, specifically basketball, as a way to identify, cultivate and educate leaders. According to its website, SEED works to maximize student potential in educational activities while emphasizing leadership and social responsibility. The organization is based in Senegal and serves 2,000 youths a year, ages 6 to 19, with boarding and after-school athletic, academic and leadership programs in accordance with the principles of education, life skills and responsible citizenship.

“It’s always exciting to, first of all, see those young men and women who’ve been through the program, the SEED Project in Senegal, as they move on to have an opportunity to pursue their education, get a college degree, and continue to play basketball,” Fall said. “To have them come to New York and share their stories with supporters and people who are interested in finding out more about what SEED is about. They [SEED team in New York] did a fantastic job, just a great location and a great turnout. We’re pleased.”

Fall said the most important aspect of the SEED Project is for it to continue to be in a position to “provide opportunity for young boys and girls who have a passion and a desire to achieve big things, just a holistic approach in terms of using basketball as a conduit to really impact these young lives.”

“At the end of the day, it’s about motivating these young people to have an interest, to take on their responsibility in terms of what they can contribute to the future of Africa,” Fall explained. “I’ve always told them, if Africa’s ever going to have a chance of true development, it has to be able to rely on its youth, which are the biggest asset, more than 65 percent of the population, and it’s only going to get younger in the future. SEED’s mission is really to use basketball to empower and get these young people to focus on their education and learning to be good citizens and having a sense of responsibility towards their community.

“So the most important things for me is just to see them continue to grow as human beings. I think sports come third in bottom row there. Obviously, the values of the game of basketball teach them to be disciplined, to set goals, and learn to work as a team.” 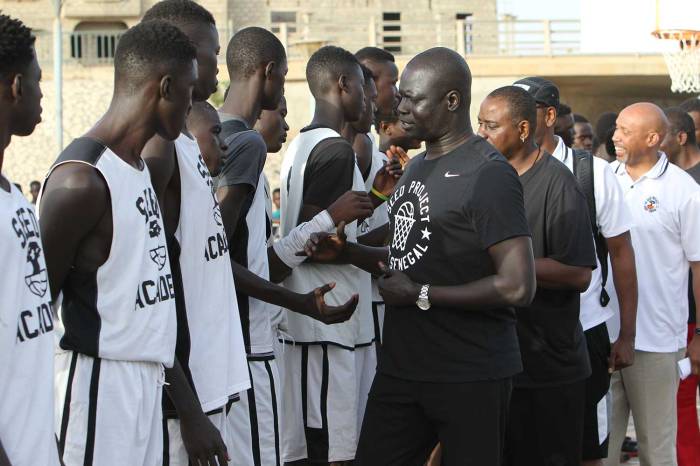 According to a press release, NBA Academy Africa will employ a holistic, 360-degree approach to player development that focuses on education, leadership, character development and life skills. As part of the program, the students will compete against top competition throughout the year and will have an opportunity to be selected for travel teams that play in international tournaments and exhibition games.

Fall said he feels blessed to see the growth of SEED across Africa.

“The work we are doing at NBA Africa in some many ways dovetails with what I’ve started at SEED,” he explained. “It’s really, really an exciting time for basketball in general, but especially for us. Just humbled and blessed for the opportunity to work with such brilliant group of young people who, undoubtedly, all we’re doing is just provide the enabling factor for them to have a chance to be successful in life, first and foremost. Some of them, yes, will achieve big things in basketball, but that’s really the cherry on the top of the cake, I say.”

Fall’s journey plays out in the narrative of how the SEED Project began.

“It’s really my story, how I stumbled into basketball many, many years ago. I was helped by a generous soul, somebody who was with the Peace Corps who saw me play and helped me get a scholarship to come to the U.S. It opened my eyes to the power of sports, and also opened doors for me to meet unbelievable people along the way,” he said. “I found a career in basketball even after a short college career. I just endeavored from that point on to figure out a way to give back, especially replicating my story and we’re able to do that with number of other young people. Ultimately, we thought coming up with an organization which sole mission would be how to use sports as a conduit to socioeconomic development.

“That’s how SEED came about. SEED’s going to be 20 years old in 2018, so that’s an amazing … 20 years later seeing all the young people who have been imparted. We just want to make sure that they all continue to focus on having the duty to give back, to inspire the next generation,” said Fall. “It’s great to see now that people who are running the organization instantly are all young people that we’ve crossed paths with many, many years ago who are coming to basically carry on the torch. The mission remains the same. What is exciting is to see now people who have gone through the program coming back and taking it to even greater heights.”