Klay Thompson: ‘What 2020 really taught me is that we still have such a long way to go’

SAN FRANCISCO — Klay Thompson has had countless hours to think about more than basketball after being sidelined since Game 6 of the 2019 NBA Finals. Since then, the Golden State Warriors guard has gained a greater appreciation for being a professional basketball player and has begun using his platform to speak out against racism and social injustice.

“I’ve learned that as professional athletes and NBA players, we have a platform,” Thompson said during the Warriors’ media day on Monday at the Chase Center. “It’s all right to do what we want with that platform, but let’s pay more attention to social justice issues or promote your own business or a small business or the community. And I’ve learned that it’s a very special opportunity to have these types of platforms.

“World leaders sometimes don’t have as big of a platform as we have. And I think it’s great we voice not only our frustrations, but we empower communities that may be marginalized.”

Thompson was born in Los Angeles to a Bahamian father, former NBA center Mychal Thompson, and a white American mother, Julie. Mychal Thompson was the No. 1 pick in the 1978 NBA draft by the Portland Trail Blazers and also won two titles with the Los Angeles Lakers. The NBA veteran made more than $5 million during his 12-year career, in which he averaged 13.7 points and 7.4 rebounds in 935 games, according to Basketball-Reference. 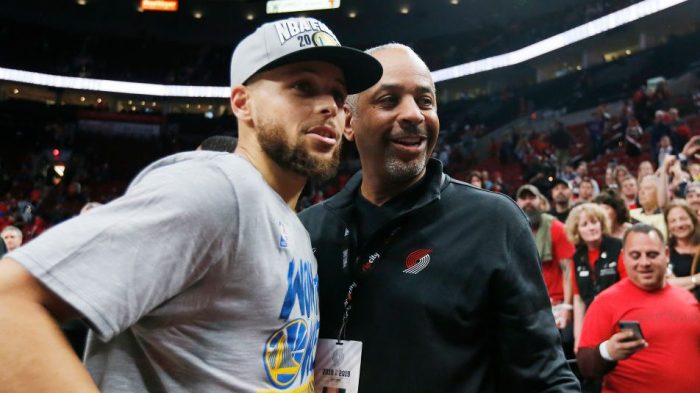 The Thompson family, which includes three boys, moved to Lake Oswego, Oregon, when Klay was 2 years old. Lake Oswego was a predominantly white and upscale community with a very small Black population when Klay Thompson grew up there. When he attended high school, the Thompsons lived in Ladera Ranch, California, in Orange County, which is also a predominantly white and upscale town. Thompson said he was “lucky” to grow up with a “privileged lifestyle,” where he went to private school.

“I was the son of an NBA player. So, for a lot of my life, I was able to operate in spaces with a lot of white people, a lot of people who come from great families who go to college, who are lawyers, doctors,” Thompson said. “But when you come to the NBA, you learn from your teammates and players who come from the inner city or the favelas of Brazil, and they have worked so hard to elevate their lifestyle.

“But it’s hard because you have so much family and friends who want to have that same American experience. Sometimes the cards are just stacked against you, whether it’s the neighborhood you grow up in, the school system you’re in. It’s hard just to obtain assurance of your next meal.”

However, Thompson said he didn’t go to school with many kids of color his entire childhood. And even with his father’s celebrity status, wealth and privilege, Thompson said, he wasn’t free of racism as a Black child.

“Being at a private school a lot, sometimes there are only a few kids of color,” Thompson said. “So, you would hear ignorant things. But it didn’t affect me as much as it does now in adulthood because I was a child. I just let it roll off my back whether it was hearing the N-word or racial epithets about marginalized groups. You just learn that’s ignorance and all you can do is check people for it, and I learned in adulthood how deep words really cut.

“You remember those traumas as a kid, and I didn’t get much at all, but so many of my friends in the NBA have so many stories about being stereotyped, whether it’s being pulled over for being Black or checked at the shopping mall or buying stuff and not thinking you could afford it. Stuff like that just opened my mind [to] try to be more compassionate to people who have had to deal with that for generations. I think 2020 really showed us that the world needs more love, and just to try to hear people’s stories, because you don’t want to be judgmental of people who have gone through so much.”

Thompson is a five-time All-Star who has built a reputation as one of the greatest shooters in NBA history. The three-time NBA champion, however, also had a reputation for being quiet off the floor and having a love for his beloved dog, Rocco. But while rehabilitating in the midst of a pandemic, Thompson became more social justice-minded after the murder of George Floyd while in police custody in Minneapolis on May 25, 2020, and due to other police brutality and social injustice that occurred during the year.

After Floyd’s death, Warriors guard Juan Toscano-Anderson organized a peaceful “Walking in Unity” event in his hometown of Oakland, California. During the June 3, 2020, march, Thompson and teammates Stephen Curry, Kevon Looney and Damion Lee attended. Thompson said the march had a great impact on him. 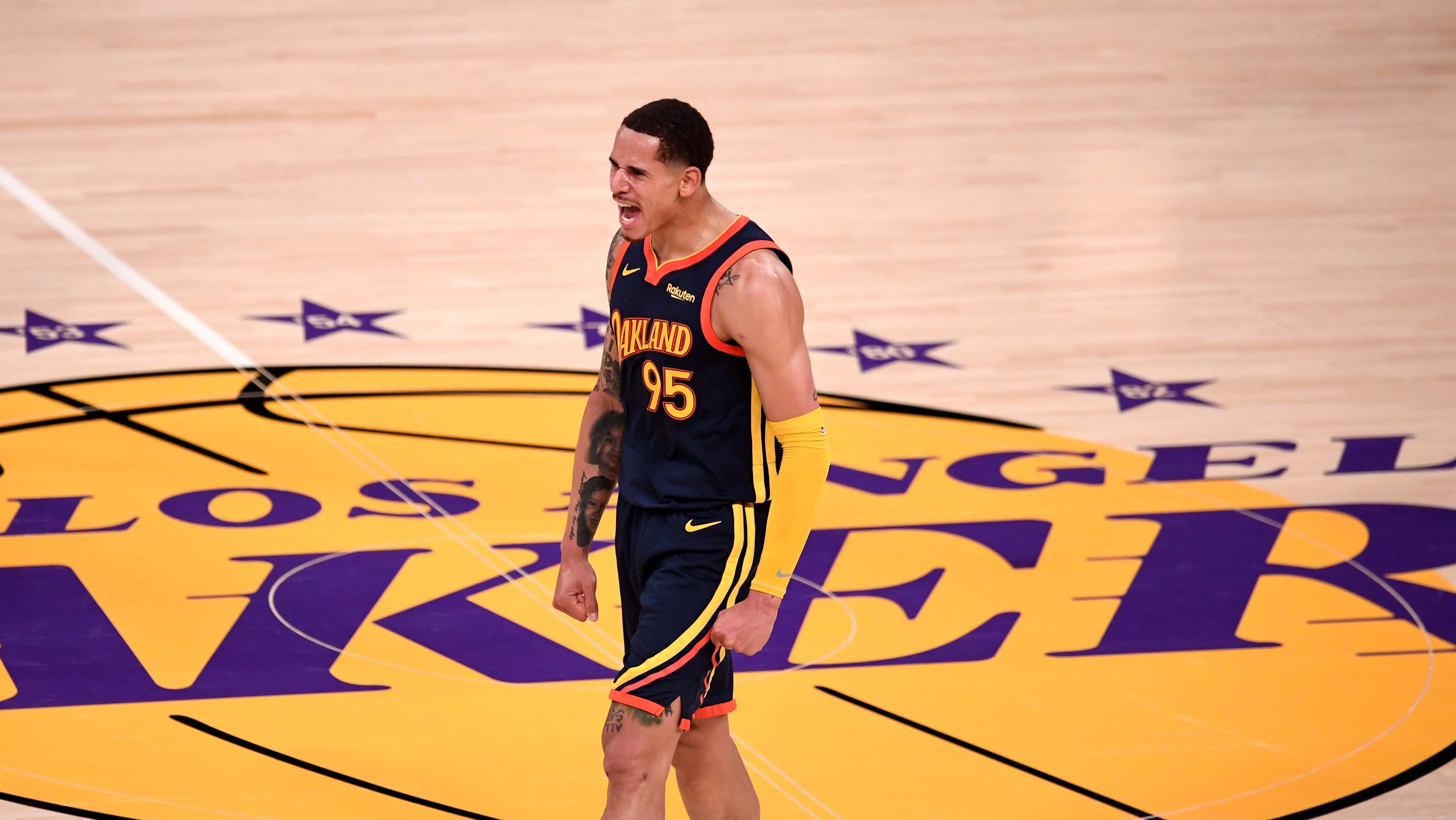 Warriors’ Juan Toscano-Anderson: ‘If I can change one life, then I’ve done my job’Read now

“I thought a really special moment for us last year was walking through Oakland with Juan Toscano-Anderson and watching him lead,” Thompson said. “He grew up in East Oakland. It’s tough. We all know how tough it is out there and just follow him and his friends in the neighborhoods and chant the names of those who have been unfairly murdered and unarmed.

“That was probably my favorite moment of the year. It was very empowering and it was so surreal and it was special.”

Said Toscano-Anderson to The Undefeated: “It’s just cool to get your teammates out there who are leaders, veterans, superstars and NBA champions. It’s just a nice gesture on Klay’s behalf to not only show up and support, but consider it one of his happy moments of 2020. I’m happy I could bring some positivity into a year with a lot of hardships.”

Curry and Thompson became known as the “Splash Brothers” for their shooting prowess after Thompson entered the NBA 10 years ago. Thompson said he expects to finally return to action after recovering from an Achilles tendon tear, his latest injury, in November or December. Curry can’t wait to be on the floor with Thompson again, and mentioned the silver lining of his teammate’s growth as a man since being sidelined.

“He’s found other things that give him life and fun and joy and a sense of purpose, if you will,” Curry said. “And basketball has a big piece of that, but he has to work his ass off to get back there and it’s no easy task at all. So, that balance is really, really nice to see because at one point it was just basketball and basketball only. And I think that’s an important thing to realize just as a human being.”

So what is next for Thompson besides returning to the Warriors? The 31-year-old would like to help even the playing field in life for disadvantaged African Americans, other kids of color and the less fortunate.

“What 2020 really taught me is that we still have such a long way to go, especially in this country, for people to have the same opportunity I had as a kid. I had everything handed to me. I had gym access. I had great schooling. And I want every child, no matter what color you are, to have that opportunity,” Thompson said. “And it might seem like it’s impossible, but it’s not. And I think you start within your community first. You empower those around you, whether it be your family or friends, and then you try and go bigger.

“We’ve got the platform, playing for the Warriors. You try to preach great things, whether it’s valuing time, your family, your relationships rather than material things or the big house or the mansion. But really, just the ability to inspire people is what I learned in 2020 it’s all about.”