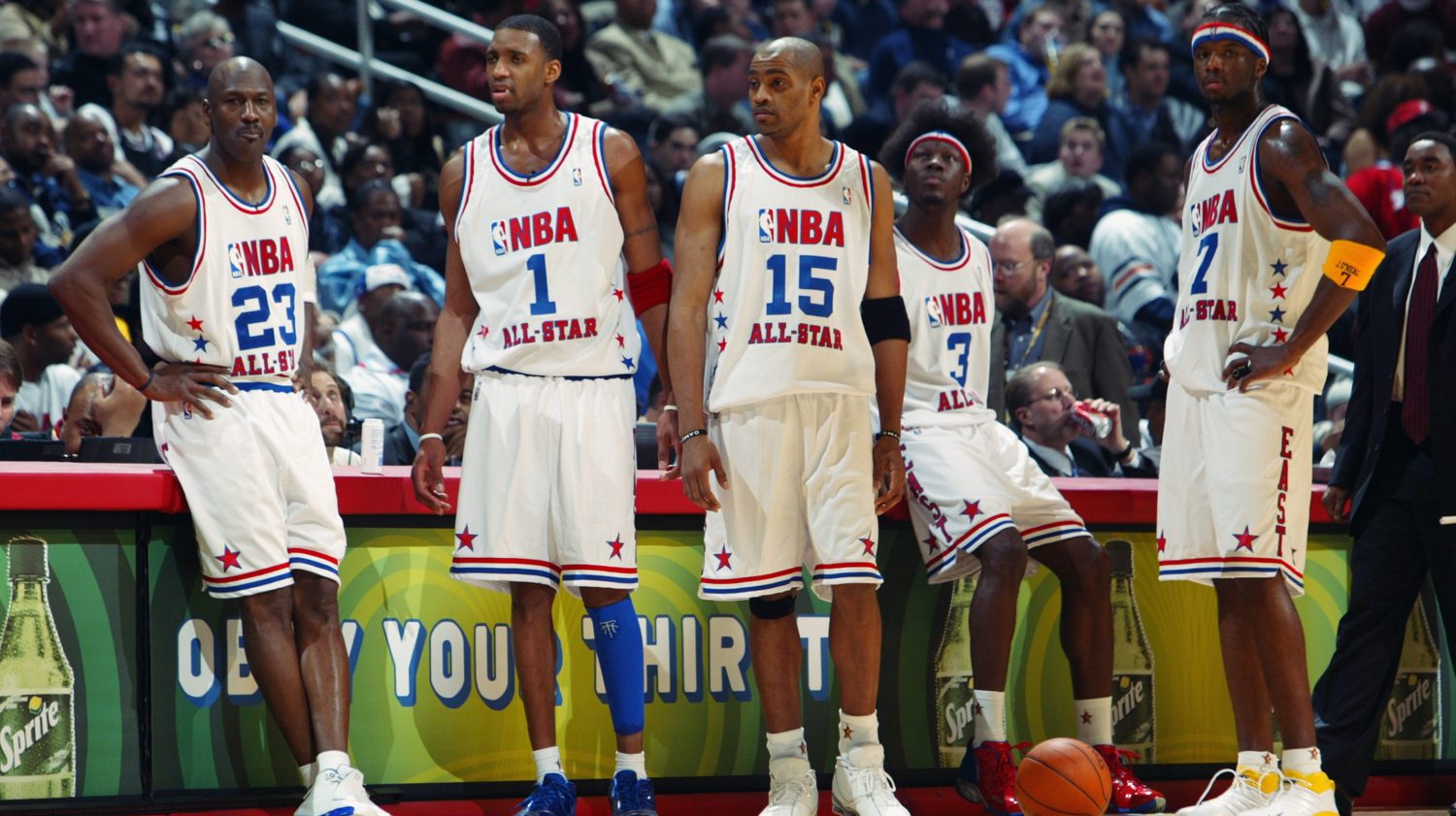 And will any 2019 All-Stars step aside this year so reserves Dwyane Wade and Dirk Nowitzki can be starters?

At Charlotte, North Carolina’s, Spectrum Center, moments before tipoff of the 2019 NBA All-Star Game, Meek Mill will take on the role of a public address announcer, as the voice responsible for player introductions. Per tradition, the reserves receive their moment first. Then comes a rundown of the names and accolades of the game’s 10 starters. This year, it’s LeBron James, Kevin Durant, Kyrie Irving, Kawhi Leonard and James Harden vs. Giannis Antetokounmpo, Stephen Curry, Joel Embiid, Paul George and Kemba Walker.

Among the reserves of the teams — captained by James and Antetokounmpo, the two leading vote-getters of the Western and Eastern Conferences, respectively — are a pair of legends. Two weeks before All-Star Weekend, NBA commissioner Adam Silver named both Dwyane Wade and Dirk Nowitzki as special roster additions to the game. Wade, on his #OneLastDance farewell tour across the league, was selected by James, his close friend and former Miami Heat/Cleveland Cavaliers teammate. “My only goal All-Star Weekend is to throw LeBron one lob, because that’s what everybody wants to see,” Wade said. “Outside of that, I don’t need to do much else, maybe guard Dirk once.” Nowitzki will come off the bench for Team Giannis, just like he’s done for the Dallas Mavericks during his 21st and final season.

But what if Meek Mill, when he hops on the mic, actually introduces Wade and Nowitzki in the starting lineup? Honestly, they should be. It seems like a no-brainer for a starter on each team to begin the game on the bench, in place of the two OGs.

And it wouldn’t be the first time it’s happened. Back in 2003, Vince Carter made the grand gesture for the most heralded reserve player in All-Star history: Michael Jordan. At the time, Jordan was a member of the Washington Wizards making his swan song appearance in the midseason game, eight days before his 40th birthday. “I was hoping that MJ ended up being a starter,” Carter, now 42 and playing for the Atlanta Hawks in his 21st NBA season, told The Undefeated. “But if not, I already had the notion that I was gonna give him the spot.”

Yet, before Carter came to do just that, it took a lot of thinking — and even some persuading. “I remember talking to Vince,” then-Indiana Pacers head coach Isiah Thomas, who was selected to lead 2003 Eastern Conference All-Stars, told The Undefeated, “because he and I were in very similar positions.”

In 1987, Thomas gave up his starting spot in the All-Star Game to the retiring Julius “Dr. J” Erving. At the time, Thomas had been the only player in NBA history to start the game in each of his first five seasons in the NBA, but he ended his streak for Dr. J. The moment shared between Thomas and Erving wasn’t the only precedent to Carter’s going-away present to Jordan. Doug Collins allowed John Havlicek to start in his place for the Boston Celtics Hall of Famer’s 1978 All-Star finale. And in 1992, Tim Hardaway went to the bench for Magic Johnson, who came out of retirement to start in the All-Star Game three months after announcing to the world that he was HIV-positive. Johnson dropped game highs of 25 points and nine assists en route to being named the game’s MVP.

What if Meek Mill, when he hops on the mic, actually introduces Wade and Nowitzki in the starting lineup?

History was steering Carter in one direction. “With it being Jordan’s last All-Star Game,” Thomas said, “I let Vince know … it would be a selfless thing to do and something I thought Jordan would truly appreciate.” (And this is from the Hall of Famer allegedly behind the “freezeout” of a young Jordan in his first All-Star Game as a rookie.)

But Carter — no shade to His Airness — wanted to start. The Toronto Raptors superstar had certainly earned the right to be in that position. He received the third-highest number of votes (1,300,895), behind only Kobe Bryant (1,474,386), the reigning All-Star Game MVP, and Tracy McGrady (1,316,297), the league’s leading scorer at 30.4 points a game. Jordan secured 1,082,909 votes but finished more than 73,000 behind Allen Iverson for the Eastern Conference’s second guard spot.

That meant Jordan, making his 14th All-Star appearance, would for the first time play as a reserve. (As an injured reserve, Jordan sat out of the 1986 All-Star Game with a broken foot.) Frontcourt stars Jermaine O’Neal and Ben Wallace joined McGrady, Carter and Iverson in the starting lineup.

“There are a lot of guys who could step aside,” Carter told The Associated Press in 2003. “I feel I owe these fans. They had enough belief in me and felt I should be out there as a starter. So why should I slap these fans in the face? … I understand the other side. But it’s one person — who is the greatest, don’t get me wrong — or a million-plus that is going to be disappointed.”

It’s worth noting that Jordan had fully supported Carter’s original decision by accepting the unfamiliar bench role. “It’s a Catch-22,” Jordan said then. “If he gives up his spot, some fans will be disappointed. … That’s not the way it’s meant to be.”

So why exactly did the onus to give up a starting spot fall on Carter? There are three reasons. First, each player stood 6 feet, 6 inches tall and played shooting guard. “At that time,” Thomas said, “the All-Star ballot wasn’t set up the way it is now. It was all about the position you played, and they happened to play the same position.”

Secondly, both Carter and Jordan were products of the University of North Carolina. In a sense, some regarded the younger Tar Heel as the second coming of his predecessor. The title of a 2002 biography, written by Bill Harris, even dubbed Carter The Air Apparent.

And lastly, the factor that made skeptics salivate and criticism unavoidable: Because of injuries, Carter had barely played in the lead-up to the All-Star Game. When the starters were announced in late January 2003, Carter had appeared in just 10 games that season. Before the All-Star break, he returned to the court to play five more. Although the sample size of games was small, Carter had posted career-low averages in points (18.8), rebounds (3.5), assists (2.5) and field-goal percentage (43.3).

“It was a great stand-up moment, and it spoke volumes to me about the person and the man that Vince Carter is.”

“He doesn’t deserve to be in the game,” proclaimed TNT analyst and 11-time NBA All-Star Charles Barkley. “He hasn’t played enough to warrant an All-Star selection.”

It didn’t help Carter’s case when his teammates began both questioning and acting against his decision. Ray Allen took Carter to task in interviews with the media. McGrady, Carter’s own cousin, publicly offered to give up his starting spot to Jordan — twice. Iverson vowed to do the same in a private phone call with the 39-year-old player. But Jordan, according to the AP, declined each proposition. A week before the game, a reporter asked Carter if he’d considered calling Jordan and surrendering his spot. “Next question,” he responded.

According to Canada’s National Post, there were rumblings that the Eastern Conference team had “schemed to get Jordan in the starting lineup.” The Chicago Tribune reported that all five starters wanted to give up their spot, but a team vote determined Carter would do so based upon the pair’s Carolina connection. There was also a rumor that Nike, the brand that both players endorsed, had been pressing Carter. After the game, Carter debunked all of those rumblings.

When he met with the media the day before the game, Carter remained firm on his stance. “To clear the air on this Michael Jordan thing before any questions are asked,” he said, “I feel he’s a legend, the greatest player to ever play the game. That made the decision tough. I respect who he is and what he’s about.”

He might not have shown it, but the decision seemed to weigh heavily on Carter. “Other than the mandatory things I had to do,” Carter later told reporters, “I didn’t step outside my hotel room at all.”

By the Sunday afternoon of the game, Carter informed Thomas that he wanted Jordan to start in his place. “We’re working on something,” said the Eastern Conference team head coach (with a “knowing smile,” as The Indianapolis Star wrote) two hours before the game. “You guys will see at game time how it unfolds.”

So why exactly did the onus to give up a starting spot fall on Vince Carter?

In a pregame huddle, Carter grabbed Jordan and whispered in his ear. “I told him, ‘You’re taking this spot,’ ” Carter says now, more than 15 years later. “I told him he wasn’t getting me blackballed from the league. … He kept saying, ‘No, no, no. You earned it.’ I said, ‘Yeah … but this is your last one. So you’re gonna take the spot.’ If he didn’t, I was gonna walk back into the tunnel and into the locker room so he wouldn’t have had a choice.”

Onstage inside Atlanta’s Philips Arena, Carter was still announced as a starter for the Eastern Conference in the 2003 NBA All-Star Game to the tune of boos from the crowd. But moments later, when the announcer revealed that Jordan would take his place, Carter cracked a smile.

“I thought it was important that Vince be listed and be acknowledged as the starter,” said Thomas, who notified the announcer of the last-minute change. “And after giving up his position, we could honor Michael Jordan. I felt like they both should’ve been acknowledged. … It was a great stand-up moment, and it spoke volumes to me about the person and the man that Vince Carter is.”

Jordan, the freshly minted starter, opened the All-Star Game with seven missed shots but ultimately found a groove. With 23.1 seconds left in the first overtime period and the game tied 136-136, the Eastern Conference team put the ball in Jordan’s hand. With three seconds left on the clock, he delivered with a trademark fadeaway over Shawn Marion, bringing the crowd, which included Jay-Z and Beyoncé sitting courtside, to their feet.

After a Western Conference timeout, Carter rushed out onto the hardwood as the first teammate to dap Jordan up in celebration of the clutch play. Unfortunately, the moment was spoiled by a controversial foul called on O’Neal while defending Bryant’s 3-point heave from the corner. Bryant made two of three free throws to send the game into double overtime. The Western Conference went on to win 155-145. Jordan finished the last All-Star Game of his career with 20 points, five rebounds, two assists, two steals and a should’ve-been game-winner.

“The official should not have made that call,” Thomas said. “Jordan had just made the game-winning shot in the All-Star Game … and you call a foul on a fadeaway 3-pointer to send a guy to the line? The official totally missed the moment. That could’ve been the perfect send-off for Jordan.”

When the time comes for Carter to retire, perhaps the commissioner will make him a special All-Star Game roster addition. “That’d be cool,” Carter said, “if he’s nice enough to do it.” And maybe a younger player, who understands Carter’s indelible legacy, will step aside for him to have a moment — just like the one he gave Jordan.