USC’s Evan Mobley is getting closer to his NBA dream

The freshman has dominated this season and is a potential No. 1 draft pick

As expected, USC freshman Evan Mobley has been one of the best players in college basketball this season on his way to becoming a top pick in the NBA draft. But his college experience has been far from typical. For starters, the pandemic has kept fans from enjoying his historic season in person.

“I really wish that we could have had fans there and everything,” Mobley told The Undefeated. “I wanted to have the full college experience my freshman year, especially since your freshman year is supposed to be one of the best times to experience everything. To not have that kind of pains me.

On Saturday, Mobley and the Trojans (the No. 6 seed in the West Region) will appear in their first NCAA tournament since 2017. They will play the winner of Thursday’s Wichita State-Drake First Four game.

How the Trojans fare in the tournament will likely depend on the success of Mobley. But whatever the outcome will be for USC, Mobley says he has enjoyed his time in college. While it hasn’t been the traditional experience due to the pandemic, Mobley has been able to spend invaluable time with his father and brother, who are also members of the basketball team.

His father, Eric Mobley, is an assistant coach, and his older brother, Isaiah Mobley, is a starting forward. His mother, Nicol, lives nearby as well.

So, with each Trojan game this season, it has been a Mobley family affair.

“It’s amazing to have family around right now during this pandemic, especially because not a lot of people get to have that,” said Mobley, who is from Murrieta, California. “A lot of people are alone in college, not near home and stuff like that, but I get to be near home with family and all that. It’s just an amazing experience, and to play with them on the floor. And my dad, as far as the assistant coach, is amazing.

“Right now, I probably don’t appreciate it as much as when I look back in the past. But I know later in life, I will look back and be like, ‘That was a great time in my life.’ ”

Eric Mobley cherishes the time he has had with both sons.

“I’m definitely grateful and proud of these young men and all their accomplishments,” Eric Mobley said. “We’ve been working at this for a long time, so they’ve been somewhat grooming this and we’re just taking it day by day. We’re humble people, our kids are humble, so we just take it in and we use the man upstairs to even everything out. We always say God’s plan. So whatever God’s plan is, we just go with the punches.”

While Cunningham seems to be a strong candidate for the top spot, Mobley is honored to be in consideration.

“It is crazy to think that how far I came, because when I was younger, I wasn’t necessarily the best at anything, really,” Mobley said. “I was just an average basketball player, just playing for fun and stuff. And then gradually people started falling off and I just kept getting better and better. And then now I’m at this place where I could potentially be the No. 1 pick and that’s what I’ve dreamed of my whole life. It’s crazy that thinking it could actually come true and I’m so close to getting there.”

His dad calls him a “cheat code” who can do just about anything on the court. NBA scouts agree that Mobley has star potential at the next level, noting that the 19-year-old put up strong offensive numbers as a true freshman despite dealing with double- and even triple-teams.

“Very seldom do you see a player at his size with his agility and mobility,” one longtime NBA scout told The Undefeated. “Coupled with hand skills, his shooting mechanics and so forth are above and beyond most prospects. 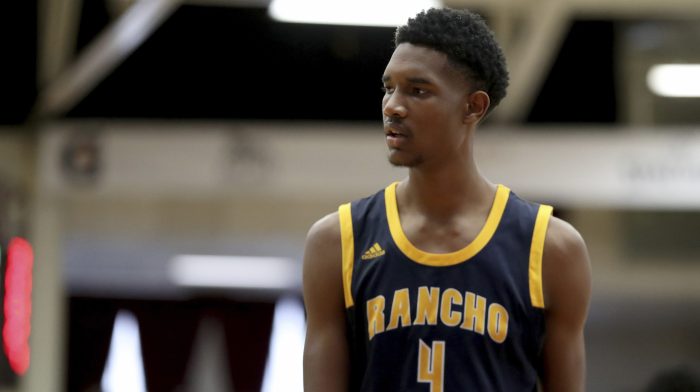 Behind Evan Mobley’s rise as No. 1 hoops prospect: ‘Basketball had to grow on me’Read now

“However, he lacks strength. You have to prepare him for the potential of him getting bulkier and stronger, which I think he will. And the other concern is willingness to take games over. And he certainly did that in the Pac-12 semifinals. He needs to grow in that regard. In some respects, he has to be a little bit nastier. But his upside is incredible due to his ability to run, catch and shoot at 7 feet tall.”

When asked about the criticism of needing to be more aggressive, Mobley agreed with the sentiment.

“A lot of games I need to be more aggressive,” said Mobley, who appeared more aggressive in two games during the recent Pac-12 Conference tournament, averaging 26.0 points, 9.0 rebounds, 5.0 blocks and 2.5 assists. “I’m working on it, it’s more of a mentality thing I need to focus on. A lot of the times I could probably shoot shots or do different plays than normal, but I would pass the ball or something like that. I just need to focus on just being ferocious and tenacious in the paint and just being more aggressive.”

One current NBA player that Mobley often is compared with is former NBA star Chris Bosh. The versatile 6-foot-11 forward could shoot from deep, score in the post, put the ball on the floor and rebound well.

“I feel like it’s a pretty good comparison,” Mobley said. “I’ve been getting a lot of comparisons lately. I feel like I just like to be myself and play my own game. I do take bits and pieces and watch people play so I can better myself, but I still feel like I have my own unique game.”

Mobley, who posted the hashtag “#enjoytheprocess” on one of his Instagram photos last month, prefers to stay focused on his journey.

“I’m just enjoying all the positives, because there’s a lot of bad things that we can all mope about and whine about that is going on right now,” he said. “But just to enjoy what’s going on, because later in life you’re going to appreciate those things that made you to who you are today.”