Tim Duncan’s Hall of Fame career has made the U.S. Virgin Islands proud

The U.S. Virgin Islands is known for its incredible beaches, water sports, nature and, perhaps more than anything, Tim Duncan. So when the former San Antonio Spurs star is inducted into the Naismith Memorial Basketball Hall of Fame on Saturday night, people from all over the U.S. territory will be celebrating.

​“He is the favorite son,” U.S. Virgin Islands Gov. Albert Bryan Jr. told The Undefeated. “He’s an international icon and we’ve never had that. Our people really appreciate that he comes over from the Virgin Islands and he wears that proudly.

“And he could have been a different kind of ballplayer who got in trouble and done all kinds of stuff. He’s done an outstanding job of being a role model for young people at home.”

Duncan was born in St. Croix, where he grew up with dreams of becoming an Olympic swimmer. But those dreams were dashed after Hurricane Hugo demolished all of the local pools in 1989.

“He’d come down there and play all the time and he was just this big lanky kid,” said Bryan, who played basketball at St. Dunstan’s Episcopal High School in St. Croix before Duncan starred there. “And the one thing about him is that he never complained, never fussed, he just played the game all the time. And it’s funny how true today, he is still that type of player. He maintained that through his career. …

“I can remember him being on the court and saying to me, ‘Oh, my God, you passed me the ball, it’s a miracle,’ because I shot everything. I was a black hole here. Pass it to me and I’m putting it in the hoop. But it was really kind of amazing to see him rise so quickly to greatness.”

Duncan averaged 25 points per game as a senior at St. Dunstan’s Episcopal. But considering that the Virgin Islands wasn’t a hotbed for NBA talent, Bryan was curious about Duncan’s potential.

“I can still remember sitting on the bleachers with a good friend of mine and watching him play. I said, ‘Do you think he’s going to make Division I?’ ” Bryan said. “He said, ‘Definitely, he’ll make Division I. He’s a great player.’ ”

Duncan turned down interest from the University of Hartford, the University of Delaware and Providence College before accepting a full scholarship with Wake Forest University. He went on to become a two-time ACC Player of the Year, averaging 16.5 points and 12.3 rebounds over four seasons with the Demon Deacons.

While Duncan could’ve declared for the draft early, he lived up to the promise he made to his mother before she died of breast cancer around his 14th birthday: to earn a college degree. Duncan graduated with a degree in social psychology in 1997 before entering the NBA draft and becoming the No. 1 pick.

“I remember he skipped the draft and went back for his senior year, which I think was a big statement for us as well too, knowing that education was a priority and he wanted to honor his mom’s memory and make sure that he finished school,” Bryan said. “Never in my wildest dreams would I have thought that a Virgin Islander would receive such an honor as being the first pick in the draft and be so humble in the whole thing. I remember him coming home and they had a motorcade waiting for him at the airport.”

Duncan is one of only three U.S. Virgin Island natives, the others being Raja Bell and Charles Claxton, to make it to the NBA. Duncan played his entire 19-year career with the Spurs, leading the franchise to five championships with players such as David Robinson, Tony Parker and Manu Ginobili, and head coach Gregg Popovich. Duncan is the only player in league history to reach 1,000 career wins with one franchise.

Arguably the greatest power forward of all time, “The Big Fundamental” was also a two-time NBA MVP and three-time NBA Finals MVP. He was named to 15 All-NBA teams, 15 All-Defensive teams and 15 NBA All-Star Games. And he and Kareem Abdul-Jabbar are the only two players in NBA history to record at least 26,000 points, 15,000 rebounds and 3,000 blocks in their careers.

In 2015, the U.S. Virgin Islands honored Duncan for his accomplishments in the NBA and for his philanthropic work.

“It’s hard to put what Timmy means to the VI in words,” said Bell, who played 12 seasons in the NBA. “His presence and success in the NBA is a source of pride for everyone from there. His efforts to support the VI with both his time and wallet are even more impressive than his career.”

Bryan said Duncan donated a basketball court to St. Croix Central High School’s gym and has done a lot for the Virgin Islands behind the scenes.

In 2017, Duncan helped the U.S. Virgin Islands receive aid following Hurricane Irma. He donated $250,000 toward the islands’ relief efforts that helped raise $2.7 million. The Memphis Grizzlies also connected Duncan’s team with FedEx, which lent him two MD-11 planes that brought 250,000 pounds of food and 20,000 pounds of generators from the San Antonio Food Bank to St. Croix.

“I had no idea how overwhelming it would be,” Duncan told ESPN in 2017. “Luckily in my little bubble, I was like, ‘All right, yeah, I can help do this.’ I didn’t realize what the feat of what I was getting into was. But I found some really good people, who in certain respects have kind of done this, and just kind of threw it together.” 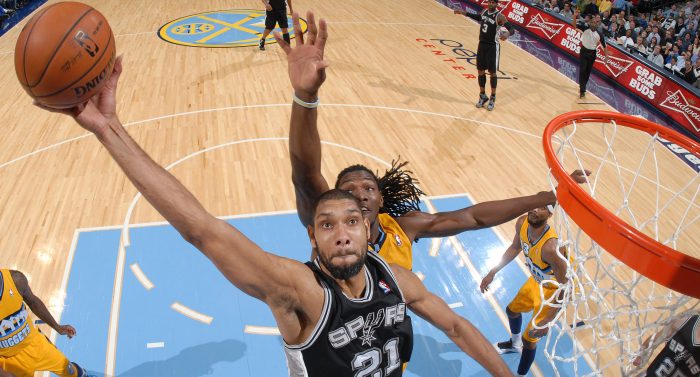 Bryan, who has been the governor of the U.S. Virgin Islands since 2019, said Duncan just likes to make sure that people are taken care of. He added that the 45-year-old recognizes the responsibilities he has as an athlete coming from a small place.

Outside of the airport in St. Croix, there is a billboard with a picture of Duncan that proudly states: “Welcome to the home of Tim Duncan.” Bryan sees that sign as not only a notable message for tourists, but also for the country’s youth.

“It really is important for them because it really shows what you can do,” Bryan said. “No matter where you are from, if you work hard, you’ve got that discipline and you stick with it, you can be awesome.”