We get MJ in a comfy chair, cigar in hand, telling his own story

He’s been about the only one of the athletic icons who has resisted the temptation of becoming available. Magic Johnson long ago mastered juggling television life and, recently, social media. Tom Brady, scarce as he may seem, shares his thoughts on weekly radio appearances. Commercial spots bring Shaq into our homes almost hourly. Charles Barkley has been the most important voice in sports television for nearly 20 years. LeBron James is Lord of All Media, even while still playing. Kobe Bryant, bless him, was in the process of taking storytelling to a fascinating and newly creative place.

But Michael Jordan, until now, was having none of it. Not any of it. He’s not on Twitter, not on Instagram, may not have any idea of TikTok. You won’t hear Jordan calling into random sports talk radio shows with a hot take, which makes 10 hours of him, through ESPN’s documentary The Last Dance, such a revelation. Michael Jordan talking. Not just talking, but sitting all comfy in a chair in his Florida home, cigar in hand, (now you know how a conversation with MJ is likely to look, for real) taking control of his own message.

God only knows how many books have been written about Jordan, and he has given his blessing to a couple of journalists over the years but has not written his memoir. So this is the best chance yet — and I’m not talking about a prepared Hall of Fame speech — to hear Jordan’s own perspective, his own reflections, on his own otherworldly career and life.

He’s never been short on strong opinions and is a terrific storyteller in private. But for the first time, Jordan is telling his own story, or at least parts of it, publicly. Over the course of five Sundays and 10 hours, we’re going to hear Jordan reveal his feelings on things ranging from the 1992 Dream Team to gambling rumors to the loathsome Pistons to the breakup of a six-time championship team not ready to be broken up. The coolest part of all (to those of us who prefer the realness of locker room language) may be hearing Jordan drop an F-bomb or two if you’re watching the unsanitized version on ESPN.

But just consider this: At a time when the most famous folk in the world almost never shut up, Jordan is giving us the rarest glimpse into his thoughts about a whole bunch of stuff. And why is this important 22 years after his retirement from the Chicago Bulls? Because people younger than 40, to whom Jordan is just a string of grainy highlights, can consume him in full. They can get an eyeful of the greatest talent to play any team sport in the history of the world (yep, I said it) and also an earful of a man who has long ignored those of us prodding him to speak his mind to the masses.

As his former teammate Steve Kerr said to Scott Van Pelt on SportsCenter Sunday night: “They can see the highlights, but not his dominance.” 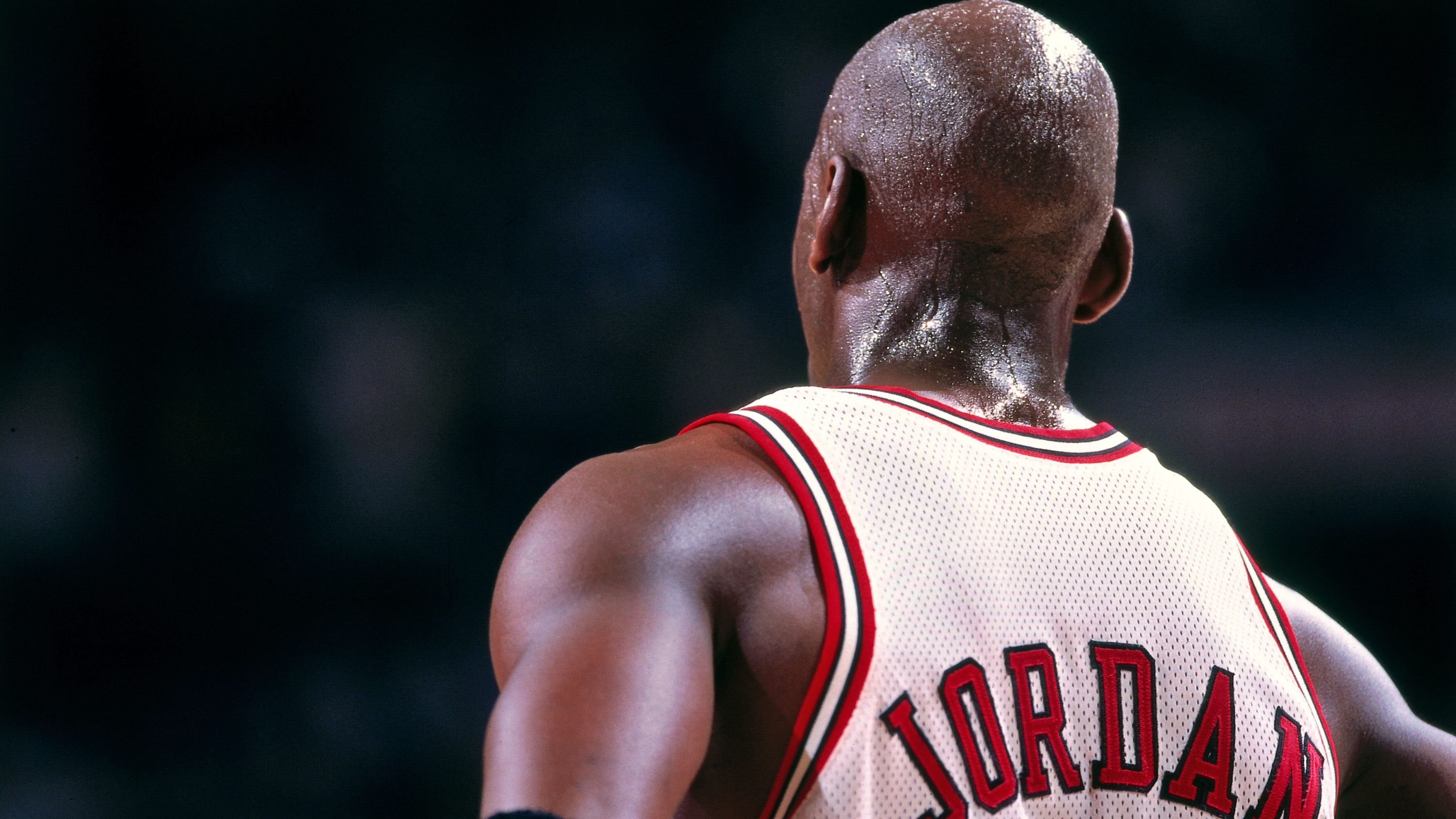 During ‘The Last Dance,’ I’ll remember how Michael Jordan brought me closer to the most important man in my life Read now

Who should care about this? Well, I’d start with young basketball players. Yes, NBA players who, if they stop tweeting, posting and staring at their hand-held devices long enough, will discover they can’t move like Jordan did, play with his savvy and gamesmanship, talk as much trash, hit as many game winners, defend like him, play with his controlled rage and lead a team like him. And they’ll likely never win as many titles.

The only thing wrong with this series is that it should have been made 10 years earlier, though who can argue with its timing. The Last Dance is airing in the midst of a global pandemic, when we need it most.

By now we’ve heard of Jordan’s only real concern, that a younger generation raised on trophies and orange slices for everybody may take real exception to him riding his teammates so hard. Compelling was the practice footage of Jordan trying to extract every bit of effort possible from his Bulls teammates, who at the start of the 1997-98 Last Dance season were just trying to hold it together with Scottie Pippen recuperating from surgery.

It was classic Jordan for those aware of what he could be behind closed practice doors, sharply questioning teammates about where they were supposed to be on the court and when. Jordan, the millennials might be surprised to find out, didn’t come to the NBA from high school or as a one-and-done barely touched by demanding coaches. He played for Dean Smith for three years in college, for Bob Knight in the ’84 Summer Olympics, for Stan Albeck and Doug Collins, then finally Phil Jackson in the NBA. All that’s to say, Jordan knows the benefits of being coached hard, and as a veteran player wasn’t the least bit worried about offending those teammates who, grown men or not, needed to be prodded without apology.

People older than, say, 55, aren’t so easily put off by Jordan going off during practices. But Jordan has always worried that the easily offended won’t see the championship ends justifying the means. He’s always been concerned with what people think (about certain things). He worries now that teenagers and 20-somethings will see footage from The Last Dance and just label him a tyrant and check out.

I passed on taking a sneak peek at the advance copy of the series sent to me for the specific purpose of watching in real time with my 12-year-old son Matthew (whose first name surely would have been Jordan had my brother not beaten me to it for his own son). He’s a little point guard who thinks he knows everything Jordan, but got the wide eyes when he heard Jordan take off on teammates in episode one. “Dad, did yelling like that actually help them?” he asked, stunned at the tone.

Yes, it helped. Direct cause and effect.

What we saw in episodes one and two Sunday night provided the necessary framing of what’s to come, of the examination of Coach Phil and, God help us, Dennis Rodman.

We saw how undervalued Pippen was by his own general manager, the late Jerry Krause, who no matter how you cut it comes across as the villain. Sorry, but he was. There’s simply no way to paint the former Bulls general manager as a sympathetic figure. We find out Krause, who splendidly put together the team in the first place, told Jackson he could go 82-0 in The Last Dance season but wouldn’t be welcomed back. Krause got Pippen to agree to a contract so unbelievably under market value that even owner Jerry Reinsdorf admits he told Pippen not to sign it, a deal that left the Bulls’ second-best player ever with a deal that made him the 122nd highest-paid player in the league by 1998. The viewer is told flat-out what people around the team (and covering it closely) knew all along: that Krause’s objective was to break up the team.

It’s a theme that surely will be revisited and dealt with in even greater depth. It’s fair to wonder, even all these years later, if Krause could hold onto his job in these times with so many more prying eyes and so much more aggressive criticism of executives. I can’t wait to see more of Rodman and hear how Jordan tolerated someone who was such an integral part of the loathsome Pistons, who tormented Jordan and Pippen for three straight postseasons before slinking out of their own arena having been swept ingloriously.

But the primary attraction of all this isn’t just the retelling, but Jordan himself doing the commenting and engaging in editorial asides. The first two episodes, for those of us who had a front-row seat originally, were a nice scene-setter. Of greater promise is what Jordan always did when he had the stage to himself — and our undivided attention — as he does now.

Michael Wilbon is one of the nation’s most respected sports journalists and an industry pioneer as one of the first sportswriters to broaden his career beyond newspapers to include television, radio and new media. He is a co-host of ESPN’s Pardon the Interruption.