Life is filled with unexpected disruptions to the flow. I was a high school junior in Oakland, California, and my older cousin, Byron, had been teaching me to DJ. This was my first gig in front of people I knew. I was nervous as I put the headphones on and searched the record crate for a song. I pulled out Bobby Brown’s “My Prerogative” to mix it with the record that Byron had put on. Oran “Juice” Jones sang the chorus, “You were holding hands, and Iiiiii will never be the same …” I blended in “My Prerogative” smoothly (right at, “Don’t get me wrong …”) and the crowd responded. Folks got hyped and put their hands in the air. Byron nodded at me. I couldn’t wait to play my next record and hear the crowd go wild again. I lifted the needle — the wrong needle — and the music went silent. Byron grabbed his head with both hands. What had I done? Everyone was looking at me.

That accidental silence had the same effect as a needle being dragged across a record: It screeches a party to a halt. As a DJ, there are times when we do a “screech halt” on purpose. When the lights are coming on or when the party must end. When the money ain’t right. Or when we need to change the pace. The room must adjust to the abruptness. Their groove has been broken, and they have to reorient. 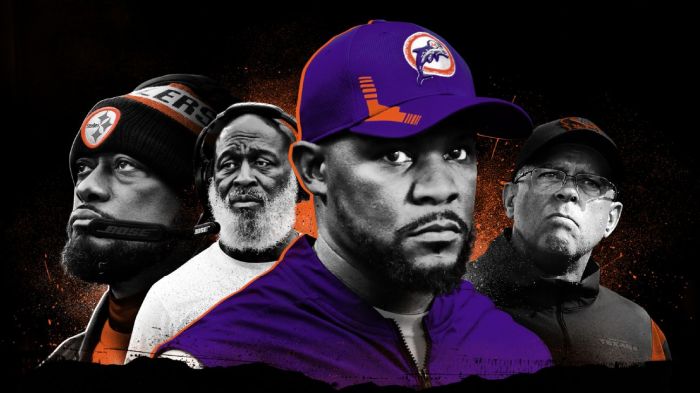 The casting of Mike McDaniel as part of a group that had been historically blocked and marginalized, seemingly came out of nowhere. It feels as though NFL owners employed a screech halt in their hiring process. This move challenges us to understand our reactions to the selection of McDaniel as head coach of the Miami Dolphins. Are we responding to the man or the machinations we imagine were in play? Over the last several years, teams have hired white head coaches and coaches of color have not been given a fair hiring process. Transparency matters. Whether this hire was in the letter or spirit of what we’ve been asking for, McDaniel didn’t sign up for this, he had been living his life as a biracial man. We ain’t mad at him, we don’t know him, we’re mad at the situation.

As a sociologist, I’ve often taught the importance of social construction, how society is created by humans and human interaction. When we do things repeatedly, we create a habit, and come to do that thing without thinking and accept it as natural, the right way and the way that it should be done. In introductory sociology, we highlight the social constructions of gender and race. Looking at gender, we first distinguish between sex and gender. Sex is anatomy, genitalia. Gender is the set of ideas and norms that describe and prescribe masculinity and femininity. In brief, there is gender identity (a person’s internal and individual experience of womanness or manness); gender expression (the way femininity or masculinity is communicated to the world through dress, language, style, voice, and characteristics and behavior); and the biological classification of anatomical sex assigned at birth (female, intersex, male).

Similarly, race is a social construction, and we explore individuals’ race and ethnicity by their racial identity (a person’s internal and individual experience of being Asian, white, Indigenous, Pacific Islander or Black); their racial expression, the way that they communicate their raciality and ethnicity; and their biological racial attributes, such as skin color and hair texture. It is important to note that social constructions have real consequences. Race — as well as gender — is a power dynamic and ultimately white people, and white men in particular, have defined the groups, determined who belongs where, and enforced their rules through decisions on laws and informal and formal practices inside organizations. And because of this, there are real, material gender and racial differences in pay, wealth, health and morbidity. 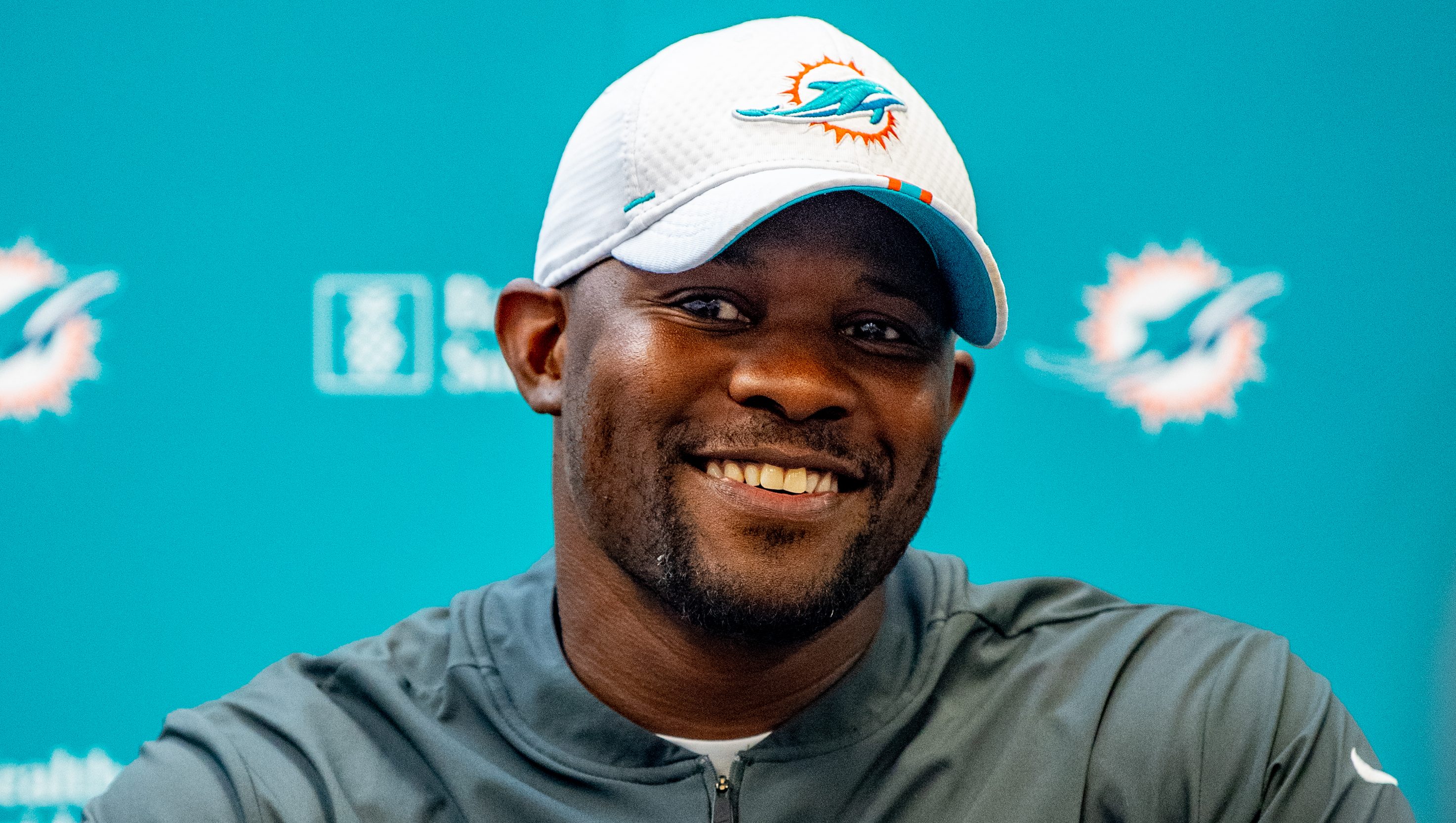 At the NFL scouting combine, the subject of Brian Flores is a topic of conversationRead now

Mike McDaniel says he is biracial: This is his racial identity. His racial expression, however, is white. In his own words, he doesn’t put himself in a box, he is a human being. Saying this exhibits colorblindness, freedom not experienced by persons who live with racism every day. McDaniel has white-dominant physical attributes, from his very light complexion to straight hair. Clearly, biracialness has a spectrum. McDaniel seems to be on one end, having a Black dad but not raced in treatment or appearance.

I’ve been asked, “Does he count?” The question isn’t really about him, it’s about the dearth of coaches of color and that NFL owners seem not to care when considering their head coach hires. I recently asked a panel — a business professor, former NFL general manager and UFL commissioner, and two journalists — what percentage of head coaches should be Black. The answers were: 50%, and 80-90% or the same percentage as the player-race percentage. Even if all vacancies this year had been filled by a Black coach, the league would have nine Black head coaches out of 32 and 11 head coaches of color out of 32, or less than one-third. It will take many more vacancies filled by coaches of color for it to look like the NFL no longer has a diversity problem.

McDaniel has said the words “my dad is Black.” This means, by definition, he is a man of color, and so he counts as a minority hire. That said, McDaniel had not been a part of the public analysis of candidates of color. On Dec. 14, 2021, the NFL posted a story on its website titled Minority coaching candidates who deserve closer look in next NFL hiring cycle, and named 14 potential candidates: Jerry Gray, Mel Tucker, James Franklin, Raheem Morris, Marcus Brady, Teryl Austin, Aden Durde, Todd Bowles, Jim Caldwell, Leslie Frazier, Vance Joseph, Marvin Lewis, Eric Bieniemy and Byron Leftwich. McDaniel’s name is noticeably absent. And, his trajectory is atypical for coaches of color and looks much more like a white head coach.

At the Global Sport Institute, we have studied the NFL head coach hires from 2003 to 2020. We measured equity, in terms of fair hiring, by looking at incoming and outgoing coaches’ pathways and backgrounds. What we found, not surprisingly, and as others have, is that the prerequisites for head coaches of color are not prerequisites for white head coaches. White head coaches face fewer barriers to entry and less stereotype bias, meaning that they are not limited by their experience or lack thereof. White head coaches’ common trajectories are not so rigid and prescribed as those of men of color, and white men get to head-coaching positions in myriad ways: as college and professional head coaches, offensive and defensive coordinators; with a range of experiences, some with only high school playing experience; and at any age, white head coaches are the youngest and oldest coaches. All Black head coaches hired during the decade we studied played college football, and more than 90% played in the NFL.

McDaniel is not a former pro player. He moved straight into NFL coaching after college. He landed offensive jobs. He started as an intern (for one year) before being hired as an offensive assistant for the Houston Texans and landing running backs and wide receiver coaching jobs. He became an offensive coordinator. And, he was a coordinator for only a single year before winning the Dolphins’ head-coaching spot.

The situation within the situation is that one hire could never fix the NFL’s diversity problem. At this point, with racism and discrimination in head coach hiring painfully obvious, all NFL decision-makers know that their hires will be watched closely. We can’t ignore how the San Francisco 49ers have benefited two years in a row — for current New York Jets coach Robert Saleh, who the team hired as defensive coordinator in 2017, and McDaniel — from the Rooney Rule’s incentive program, giving draft picks for having developed coaches of color who leave for head-coaching positions. Maybe these are positive signs. And we can’t ignore that there were more than a dozen coaches of color who could have been hired for one of the vacancies over the last several years — to do so is to abide by a social construction of reality that pretends that hiring white isn’t as politically correct as hiring coaches of color.

So, for now, we’ve got to reorient. The room must adjust to the abruptness. Someone in power intentionally dragged the needle over the vinyl, bringing our understanding of the minority head coach hiring process to a deliberate screech halt.

I recall one accidental screech halt that worked out well.

“It Takes Two” was thumpin’ before the power went out. We were at Merritt Community College up in the hills. Inside. And it was a sweatbox. The windows were steamed up. The power cut out and the music stopped, but not the crowd. They kept dancing and screaming the chorus until we got the power back on. That’s how we do it in The O, The Town.

We’ll have to wait and see if the party will get going again. If McDaniel has skills, has that necessary bounce, the Dolphins will continue to show a strong culture that supports leaders of color.

Dr. Brooks is the director of research for Arizona State University's Global Sport Institute and an associate professor with the T. Denny Sanford School of Social & Family Dynamics at the College of Liberal Arts & Sciences at ASU.