How an unshakable Olympic dream was turned into a gold medal, a culture shift in women’s basketball and an appearance on a hit sitcom

For Dawn Staley, the moment was surreal.

As she stood on the set of the Martin show, donning the Team USA jersey that she had last worn in triumph in Atlanta at the 1996 Olympics just months before, Staley caught herself staring at the people whom she had watched on screen for years – Tommy (played by Thomas Mikal Ford), Cole (Carl Anthony Payne II), Pam (Tichina Arnold), Gina (Tisha Campbell) and Martin (Martin Lawrence).

Staley had been a fan of the show since it premiered in 1992, recited iconic lines of the very characters who stood in front of her, and now found herself starring alongside them. 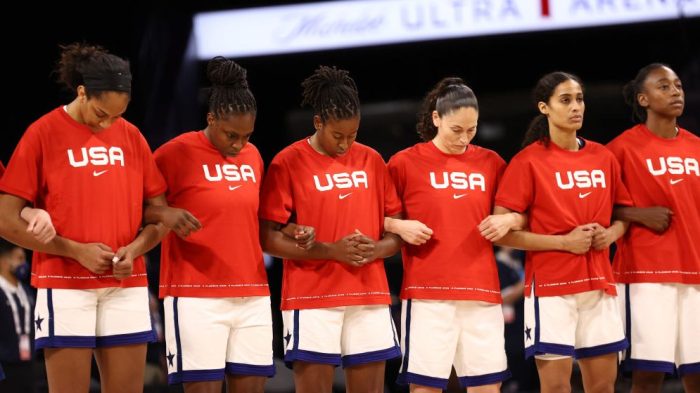 Following the 1996 Olympic team’s undefeated gold-medal run at the Atlanta Games, interest in women’s basketball had reached a peak unforeseen outside of the collegiate game. Winning gold in front of a captivated home crowd had launched the sport into the forefront of the sports landscape, which led to the cultivation of that interest through magazine covers, talk show appearances and … a cameo on the hit sitcom Martin. Though by 1996 the show was no longer averaging 11 million viewers as it had in its first season, as a whole it still held a prominent stake in the culture – much like it does today.

The team’s appearance on Martin in November 1996 served as one of the first cultural crossovers in professional women’s basketball. The timing of the episode, airing just months before the start of the WNBA’s inaugural season, served as an introduction for viewers new to the sport to follow the careers of players who appeared on the show (Sheryl Swoopes, Rebecca Lobo, Teresa Edwards and Staley) and their Olympic teammates – most of whom had disappeared from the public eye after starting their overseas careers.

“Martin was the thing at the time,” said Wendy Palmer, an 11-year WNBA veteran who played against Team USA in a three-month NCAA exhibition tour before its gold-medal run. Palmer had first watched the episode after returning from an overseas season in Oviedo, Spain.

The episode showed how “women’s basketball has been present, is present, and you know what, start looking for these ladies,” she said.

Before the emergence of the 1996 Olympic team’s triumphant run in Atlanta, women’s basketball had largely been a college-dominant sport. With no professional league in the U.S. for graduating players, many big-time college athletes simply vanished from the national eye. To continue in the sport, most of Team USA’s roster played professionally overseas.

“What happened was for four years you’re a part of this amazing fan base, you love your fans and school and then you disappear,” Palmer said. “Those players, we all went overseas.”

But as the Olympic team trained for the ’96 Games, simultaneously, the next chapter of women’s basketball in the United States was being written. In April 1996, the NBA board of governors approved the creation of the WNBA, which would start its season in 1997. And before the WNBA tipped off, the American Basketball League (ABL), which Staley and others would play in before its folding in 1998, was scheduled to tip off in the fall of 1996. Professional women’s basketball was coming to the United States. Through its successful college tour and eventual gold-medal run, the ’96 Olympic team was seen as a test of viability for the WNBA and ABL.

Said Staley: “I know we were the guinea pigs of whether or not women’s basketball could survive.”

The ’96 Olympics marked a pivotal tipping point for the women’s USA Basketball program. After winning gold at the 1988 Games and 1990 FIBA World Championships, Team USA struggled to get back into the winner’s circle. The team would win bronze at both the 1992 Olympics in Barcelona, Spain, and the 1994 FIBA World Championship in Australia.

With Atlanta serving as the backdrop of the ’96 Games, the Olympic team knew that it had a rare opportunity to change the culture of the sport in the United States. To do so, it couldn’t just medal. It had to win gold.

On an afternoon in Atlanta months before the start of the games, Olympic playing sites and attractions still yet to be erected, Ruthie Bolton and the 1996 National team walked through the entrance at the Georgia Dome after being summoned by head coach Tara VanDerveer.

Not one member of the team knew why they were there. The team, which was brought together a full year before the Olympics to train, mentally readied itself to run sprints under the lights of the 71,000-seat stadium. Then VanDerveer directed the players’ attention to the stadium’s screens.

“[VanDerveer] asked us, ‘Which one do you want to experience? I want you to think about it,’ ” Bolton recalled.

Any player who was thinking about anything less than a gold-medal experience was offered a one-way flight home.

VanDerveer then had Edwards, who was a part of two previous gold-medal-winning Olympic teams, place her medals around the necks of each player. Every player present had a chance to wear Olympic gold around her neck.

“I want you to know where you stand is exactly where the Olympic podium will be when we win the gold, when you get your medal placed around your neck,” VanDerveer said to the team.

“When it got tough, we remembered that moment,” Bolton said. “I had envisioned myself with this medal on my neck. There’s no turning back. There’s no plan B. We claimed it 11 months prior when we stood there.”

Between its pre-Olympic exhibitions, which included the college tour and international contests, Team USA would not lose a single game. By the time the players received their gold medals, after beating each team at the Olympics by an average of 28.6 points, Team USA had finished 60-0 in competition.

When Staley first got the call asking if she would like to appear on an episode of Martin with some of her ’96 teammates, her answer was a no-brainer. “I didn’t care if it required me to swim through mud, I was going to be a part of the show,” she remembered.

For Staley, Martin was the “show of shows,” a series she’d watch whenever and wherever it aired. 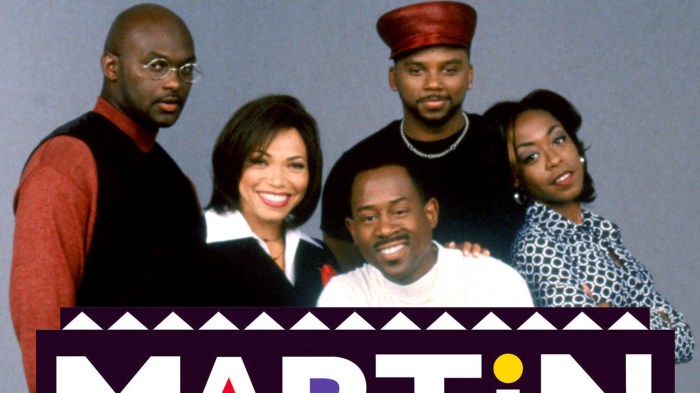 “It was a Black show that was so relatable,” Staley said. “You can identify with every single character on the show. It just pulled you in every week.”

It wasn’t long until Staley went from being a fan of the show to nervously sitting at a conference table with the cast and crew preparing to do a table read.

In the episode, titled Bangin’ Hard in the School Yard, Gina challenges Martin to a game of basketball, with the loser having to wait on the winner hand and foot for a month. When Martin views the wager as easy money, Gina and Pam reveal that they would not be playing against Martin, they would be coaching. When Gina goes to open the door, the 1996 Olympic team, led by Staley, steps through.

“On the first couple takes, Sheryl [Swoopes] was the first one to come through the door. I was basically the last one,” Staley recalled. ”During the takes, as we were going back through the door, one of the producers said, ‘Hey, Dawn, we need you to be the first one to come in.’ I told Sheryl and she was like, ‘No, let me go first.’ So I said go ahead. She went in again and we had to go back out and do it again and the producers said, ‘Dawn, remember you’re the first one.’ ”

Staley joked: “I think I deserve an Emmy for my entrance.”

Later in the episode, Staley and Team USA play a lopsided game against Martin’s not-so-All-Star crew of Cole, Tommy, Nipsey and the legendary Air Gordon.

“We were actually playing on the show,” Staley said. “They didn’t say, ‘Hey, you shoot a layup here or do this and that.’ We were playing and then they just took pieces from us playing. The only simulation was when you had to actually say a line.”

Over the two days of filming, the hardest part for Staley wasn’t remembering her lines or following the direction of the show’s producers – it was training herself to not refer to the actors as the characters they played on the show when filming.

“We only see them as Pam, Gina, Cole, Tommy. It was hard to keep up with the names other than what you grew up calling them in your home,” Staley said. “We would want to play around and be like, ‘C’mon, Gina!’ Nah, they don’t play that.”

After filming the episode, Staley recalled being invited by Lawrence to his Southern California home for a game of pickup. While she might not be able to recall specific details of the games played, she’ll never forget a particular basketball accessory that Lawrence hooped in.

“Martin played in gloves, like, the sticky football gloves,” Staley said. “I wasn’t going to ask him, ‘What’s up with the gloves?’ … It’s Martin, you’re not going to question Martin.”

When the show aired in November 1996, it became yet another example of the impact and influence the 1996 Olympic team had in moving the game of women’s basketball forward. After years in which NCAA stars and tournament heroes would fade from relevance following their collegiate careers, here was an example of women’s basketball stars, months removed from their captivating Olympic run, back in the public eye. It served as an indicator that now, perhaps, times had changed.

“It was something so perfect for that time and the culture,” said Bolton, who is serving as an assistant coach for the Nigerian Olympic team in Tokyo. “To be on that show, it was another indication of the impact that we had made.”

Though the show originally played a role in introducing the new era of professional women’s basketball in the U.S. some 25 years ago, the episode’s imprint and influence have been carried into the present.

“Listen, there are young people who only have seen me play on the Martin show and they don’t know anything about my career or what I’ve done,” said Staley, who still has a signed script from the show and a director’s chair Lawrence gave her.

“To some, I’m known as, ‘Didn’t you play on Martin?’ It’s the funniest thing, but it’s connecting generations.”