The rising star of Saint Peter’s is proud to be among these coaches: ‘It’s definitely a tremendous honor for all of us’

After an offseason in which over 50% of the newly hired Division I men’s college basketball head coaches were Black, the regional semifinals — better known as the Sweet 16 — look a lot more diverse among head coaches.

Following the murder of George Floyd by a police officer in May 2020, many university athletic departments made an effort to give head-coaching opportunities to Black candidates. While these hires only brought the percentage of Black head coaches in Division I men’s college basketball to 31%, up from 27% last season, it slightly decreased the disparity between the coaches and the players on the court. In 2021, 53% of the Division I men’s basketball players were Black, according to the NCAA demographics database.

Although there has been concern over whether last year’s more diverse hiring cycle could be just a one-off rather than real change, this year’s Sweet 16 shows that coaches of color are taking advantage of their opportunities. 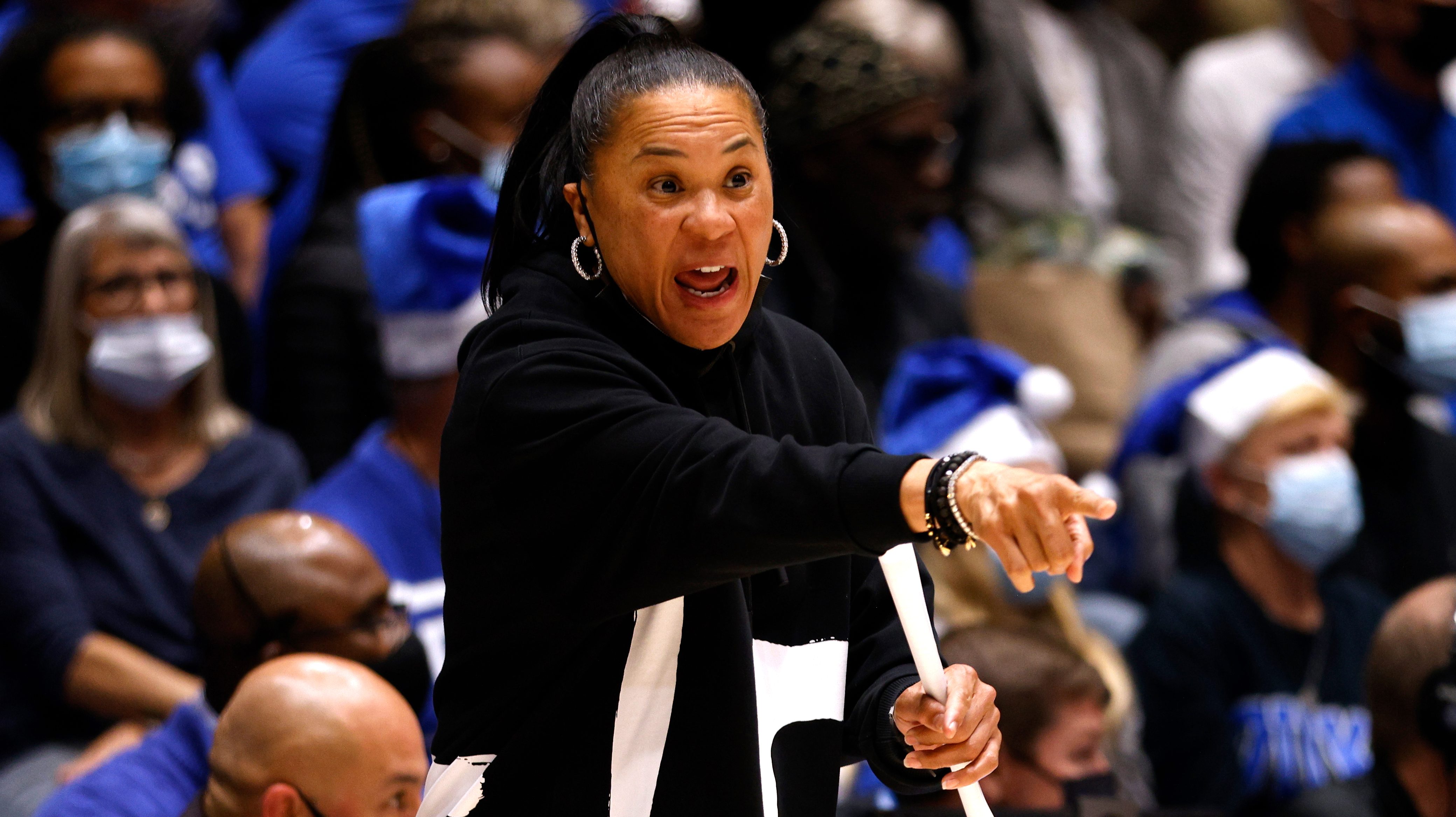 Holloway’s inclusion is the biggest surprise, but not based on any lack of pedigree. No. 15 seed Saint Peter’s beat 2-seed Kentucky in an upset in the first round and defeated 7-seed Murray State in the round of 32. The Peacocks, from Jersey City, New Jersey, became the first Metro Atlantic Athletic Conference (MAAC) team to reach the Sweet 16.

Winning in New Jersey is nothing new to Holloway, however. The Queens, New York, native was a two-time Parade All-American at St. Patrick High School in Elizabeth, New Jersey, and was the McDonald’s All American Game MVP in 1996. In college, he famously led Seton Hall, coached by Tommy Amaker, to the Sweet 16 in 2000, the last time a New Jersey school reached the regional semifinals before Saint Peter’s this season.

“Having the opportunity for young African Americans such as myself, to prove themselves [is important], because there’s a stigma out there [that] young Black coaches are just recruiters and not good coaches and they can’t have their own program.”

After playing professionally overseas and in the United States Basketball League for seven years, Holloway was an assistant at Iona for three years and Seton Hall for eight years, all under head coach Kevin Willard. He was named head coach of Saint Peter’s in 2018 and earned the MAAC Coach of the Year award in 2020.

The significance of this Sweet 16 appearance is not lost on Holloway.

“It’s a big deal,” Holloway said on Tuesday of being one of the five Black or Native American coaches in the Sweet 16. “It’s definitely a tremendous honor for all of us. But, I’ll be honest with you, I think if you can coach, you can coach. It doesn’t really matter what color you are, right?

“But [yes], having the opportunity for young African Americans such as myself, to prove themselves [is important], because there’s a stigma out there [that] young Black coaches are just recruiters and not good coaches and they can’t have their own program. This is a testament to that. To show them that you can’t judge a book by its cover. Hopefully, this is something that’s going to continue to keep happening moving forward. I’m just happy to be at the forefront of it.”

Holloway knows the importance of this run for Saint Peter’s, as well.

“It would mean everything for this university to keep moving forward [in the NCAA tournament], everything, on every level, enrollment, sponsorships for the school,” he said. “Anything you could name, it would mean that much [to the school], everything.”

As for Holloway’s future, he’s been mum, focused on extending Saint Peter’s tournament run. It’s been hinted that Holloway will return to his alma mater, Seton Hall, next season.

Willard, who left his position at Seton Hall to become head coach at Maryland earlier this week, likely spilled the beans. “Every once in a while timing and opportunity line up,” he told the New York Post. “Knowing that my program was going to go to [Holloway], it was the perfect fit and great timing. It was now or never in my mind.”

Holloway and Saint Peter’s will get that chance to keep moving forward Friday night vs. 3-seed Purdue in Philadelphia.

Here’s a look at the other four coaches:

Cooley is making his first trip to the Sweet 16 as a head coach, but he has been one of the better coaches in the nation for a long time, doing more with less. This season is a perfect example. His Providence team won the Big East regular-season title despite not having a player on the all-league first team. Cooley was named Big East Coach of the Year.

The Friars were questioned as a 4-seed entering the NCAA tournament because of so many close wins, but they have secured victories over South Dakota State and Richmond in the first two rounds.

Cooley expressed gratitude for the accomplishments of his fellow coaches in the Sweet 16.

“To have us [in the Sweet 16], I go back and think when I was a young kid with John Thompson, John Chaney and Nolan Richardson, that’s the only coaches we had to look up to, to aspire to be,” he said.

Cooley also has strong feelings about the direction college basketball must continue to move in when it comes to hiring minority head coaches.

“For us in that position now, we have to be guardians of the game,” Cooley said. “Last year was a historic year for minority hirings and hopefully that’s just not a fad and lightning in a bottle.

“We need more presidents, [athletic directors] and search firms to recognize opportunities, not just the color of your skin and the good ol’ boy network. You look at the historically Black colleges across the country and the jobs that those guys are doing. I don’t think they’ve been given a fair chance to move up the ladder like some of us have, just because of whether it’s recognition or whether it’s media coverage or whatever. But, we need to continue to fight for equality across the board in the hiring practice, because last time I checked, we’re still human, we know what we’re doing, we can run organizations, we can be the face of the program, and it’s just an opportunity. And if you get the opportunity, you’ve got to do the best with it.”

Davis is the only first-year head coach on this list. His team is finishing strong, winning eight of its last nine games, including a road win over Duke in coach Mike Krzyzewski’s final game at Cameron Indoor Stadium.

North Carolina has been impressive in the tournament so far. It destroyed a solid Marquette team in the first round and upset 1-seed Baylor despite losing two key players during the game due to an ejection and a disqualification based on fouls.

Davis’ team had been up and down before its late-season hot streak, as following the legend Roy Williams proved to be an arduous task. However, the former Tar Heel and NBA veteran has seemed to catch his coaching stride by relying on his experience.

“From Coach [Dean] Smith, Coach [Bill] Guthridge, Coach [Roy] Williams, Coach [Pat] Riley, everybody, really the biggest thing I draw on is my experience as a player,” Davis said Tuesday. “I’ve always fed off the head coach and if I was sitting there as a player and here’s my head coach giving me life, giving me confidence, showing that he’s confident and he’s poised, then I can go out there and I can execute, then that’s going to give me the same type of confidence and poise out there on the floor. So, I do draw from those coaches, but I also draw from my experience of being in their seat as a player.”

It has been a long, eventful season for Howard, the former Fab Five member and NBA All-Star. Coming off a 23-5 campaign and an Elite Eight finish in 2021, Howard’s Wolverines struggled early this season but won some big games down the stretch. And Howard was suspended for the last five games of the regular season after he struck a Wisconsin coach.

Michigan crawled into the NCAA tournament as an 11-seed with little momentum and few believing there was any realistic chance the Wolverines would make their second straight Sweet 16. But, Howard was able to get the most out of his team when it mattered, with impressive wins over Colorado State and Tennessee in the first two rounds.

Suddenly, this season will be a success for Michigan no matter what happens Thursday night in San Antonio vs. 2-seed Villanova.

Like Howard, this is Sampson’s second straight trip to the Sweet 16, having reached the Final Four last season. This season’s success is a little more surprising, considering Sampson lost his leading scorer, Marcus Sasser, 12 games into the season and rotation player Tramon Mark after only seven games.

With or without his key players, Sampson’s Cougars remain the hardest-working team in show business, finishing top 10 in offensive and defensive efficiency and top five in offensive rebounding percentage for the second straight season.

Houston comfortably beat popular upset pick UAB in the first round of the tournament and defeated Illinois in the round of 32.

Sampson, who is Native American, is making his sixth Sweet 16 appearance overall and hoping to advance to his third Final Four.

Cooley praised Sampson: “[Coach Sampson’s done] an unbelievable job. If anyone’s ever building a program from the roots up, it’s that guy,” he said.

“Our kids are tough kids,” Sampson said after the Illinois win. “This is a tough program. That’s how we’ve achieved to this point. All of our players buy in, they stand on the shoulders of the kids that came before them. I couldn’t be more proud.”