Sampson has fought as those coaches fought, not merely for basketball victories, but for African American coaches to be treated fairly.

Houston was eliminated from the NCAA men’s tournament Final Four by Baylor on Saturday, but Sampson’s career is much more than the sum of wins and losses.

“George Raveling was my mentor,” Sampson said Friday evening during a phone conversation. “John Thompson, John Chaney, George Raveling, Nolan Richardson, Clem Haskins – those were the coaches who looked like me. They looked most like me.”

While Thompson confronted discrimination growing up in Washington, Chaney and Raveling in Philadelphia, and Richardson in Texas, Sampson faced racism firsthand in North Carolina. Sampson was born in the Lumbee Tribe in Pembroke, North Carolina. The tribe, he said, “fought prejudice and racism our entire lives.” 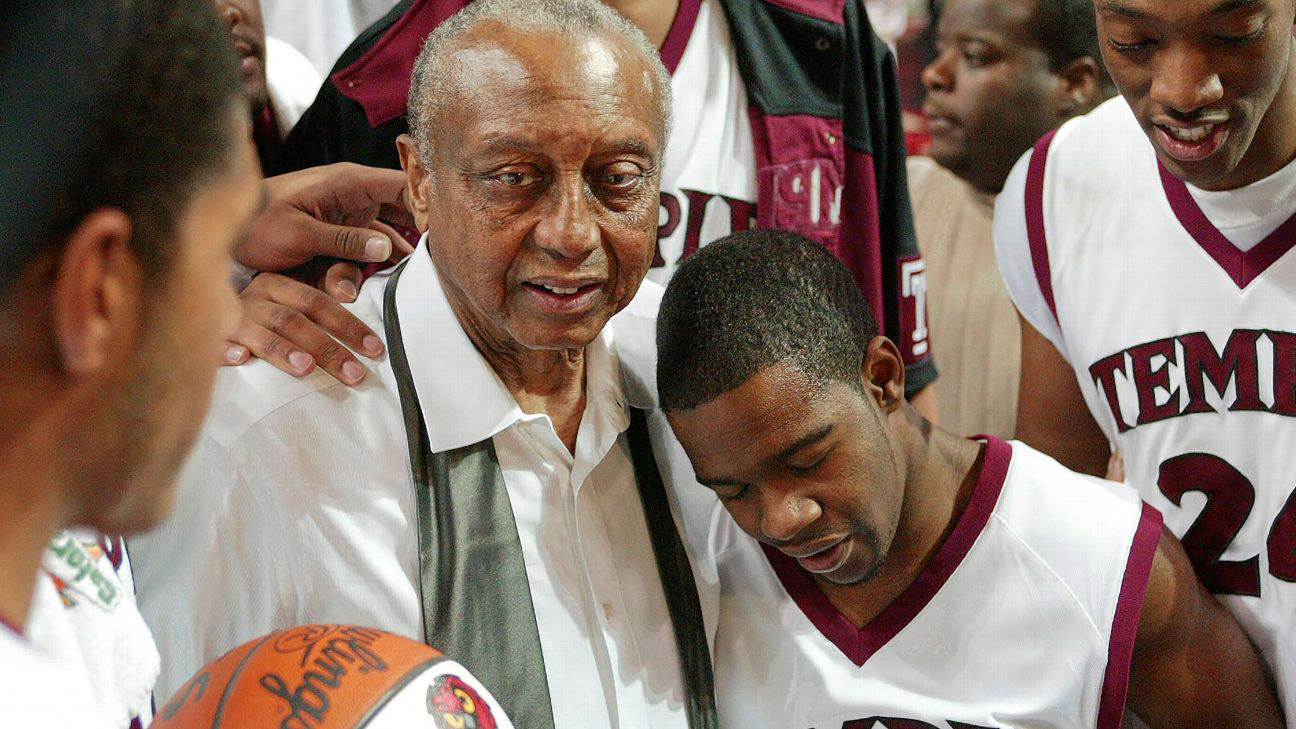 Nolan Richardson: ‘John Chaney was one of the most brilliant guys I’ve ever met’Read now

Sampson’s father, John Willie Sampson, taught him about the struggle for justice and he had not insulated him from bigotry.

“He was a rock,” Sampson said, “and a foundation piece for that community. My dad’s reputation was somebody that you looked up to. He was The Coach. He was a pretty good person to have as a role model and a hero.”

In 1958, when Sampson was 3, his father was one of 500 Lumbees who drove the Ku Klux Klan out of Maxton, North Carolina. There is a plaque that commemorates the Battle of Hayes Pond.

“The KKK was huge in that area,” Sampson told reporters Friday afternoon during a Zoom conference call. “That’s a vivid, vivid memory, very clear memory for me.”

Sampson was captain of the basketball team at Pembroke High School and played for his father. As a successful high school coach, Sampson’s father endured the humiliation of segregation.

“I remember going to high school clinics with him and all the minority coaches had to sit upstairs in metal folding chairs. All the white coaches sat down in the balcony in the theater chairs. I didn’t think much of it. That’s just the way it was in the mid-1960s.”

Perhaps this is why Sampson identifies with the plight of African American coaches and became active in the Black Coaches Association. “I always identified with the brothers — and still do,” he said.

Besides coaching, his father sold World Book Encyclopedias, life insurance, taught driver’s education and “he worked in a tobacco market.” 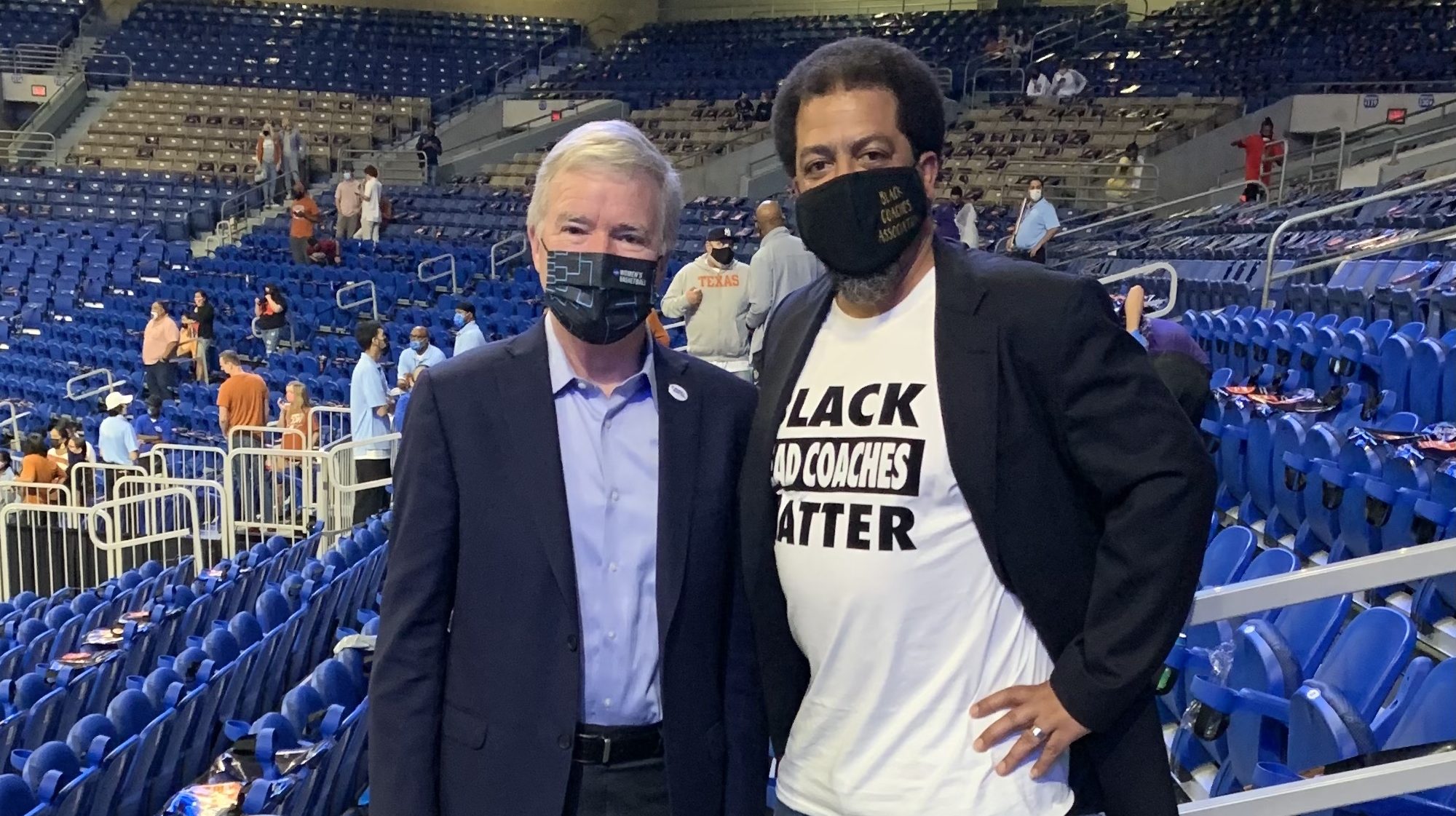 “The tobacco market was where I realized where I was living. When you went to the bathroom, there were three different bathrooms: white, colored and others.

“When you went to the water fountain, which was a very important part of the tobacco market because it was hot, dusty, it was white, colored and other. It was very divided, very racist, but we survived,” he said, “and we achieved.”

During the Zoom news conference Friday, Sampson fought to control his emotions as he talked about his father, who died in 2014. Later that evening, Sampson explained that he became emotional because the reflections took him back to 2002 when he appeared in his first Final Four as the Oklahoma head coach. His father was with him at the West Regional in San Jose, California. A day before the first tournament game, Sampson’s father, who had been battling health problems, fell and had to be taken to the hospital.

That evening he suffered an aneurysm. Sampson and his mother spent the night in the hospital. His father pulled through the surgery but was unable to accompany his son to Atlanta, where the Final Four was taking place.

In 2006, Sampson was named head coach at Indiana. Two years later, he was forced to resign and was hit with a five-year ban by the NCAA for making impermissible phone calls at Oklahoma and Indiana. Those calls are now permissible under NCAA rules.

The University of Houston hired Sampson in 2014 to rebuild a once-storied program that reached the Final Four in 1983 and 1984. Sampson had clawed his way back up the mountain to the men’s Final Four. On Saturday, Houston faced a huge mountain in Baylor, a team many regard as a potential national champion.

“Life has a way of humbling you,” Sampson said. “As you get older, you tend not to worry about what people say or think. When you are young in the profession and a little insecure, and I think I was both for a long time, you’re constantly seeking approval, everybody likes that. I think that when you get older, you focus on doing that for other people and not worrying about it yourself. I don’t need it anymore, I don’t care about it anymore.”

In that respect, one of the most exhilarating parts this season for Sampson has been a hiring cycle that has seen at least 15 Black coaches get head-coaching opportunities. “We want the younger guys, the younger brothers to have it better than we had it,” he said. “I wish John Chaney, and John Thompson, Big House Gaines and John McClendon – I wish those guys could see this. I know they’re looking, and they’re sitting there saying, ‘Look at this.’ ”

They would also be pleased with Sampson, too. After all these years, he’s keeping the faith and still fighting the good fight.