With the pressure off, Serena Williams can enjoy being herself

‘I have absolutely nothing to lose,’ she says after upsetting No. 2 Kontaveit

Of all the pearls of wisdom delivered by the person for whom the USTA Billie Jean King National Tennis Center in New York is named for, the most lasting and ubiquitous is this:

“Pressure is a privilege — it only comes to those who earn it.”

Serena Williams, 40, has more than earned it. But that doesn’t mean that pressure can’t also be an enormous burden.

Wednesday night, after she defeated No. 2-ranked Anett Kontaveit, 26, in three sets, Williams seemed divinely unburdened, more so than she has in a long time, perhaps since she won her first Grand Slam in Arthur Ashe Stadium in 1999.

Her name is derived from the Latin serēnus, which translates to serene and tranquil, but also clear, bright, cheerful, and glad. Against Kontaveit, Williams played like she was all of those things. She played like the greatest of all time.

And she knew it, too. There was a palpable sense of calm and playfulness in her banter with ESPN’s Mary Joe Fernandez during the on-court interview that followed her thrilling match against Kontaveit. With a crowd of 29,959 that could barely contain its admiration providing the wind at Williams’ back, it was not accurate to say that Williams found a way to win. She just … did it. Even with 40 ultimately inconsequential unforced errors.

She glided. She flew. She dominated. She aced.

Even though the first set went to a tiebreaker and Kontaveit won the second set, it seemed like she barely stood a chance.

“Are you surprising yourself with your level [of play] at the moment?” Fernandez asked. The GOAT let out a giggle, and a genuine smile grew wide across her face. Williams was clearly pleased with and enjoying herself.

“I mean, I’m just Serena, so you know,” she responded, with a look that indicated that her modesty was fully tongue-in-cheek, because what business does she have being modest at this point, anyway.

“Welllll, I’m a pretty good player,” she said, beaming. “You know, this is what I do best. I love a challenge and I’m rising to the challenge.” 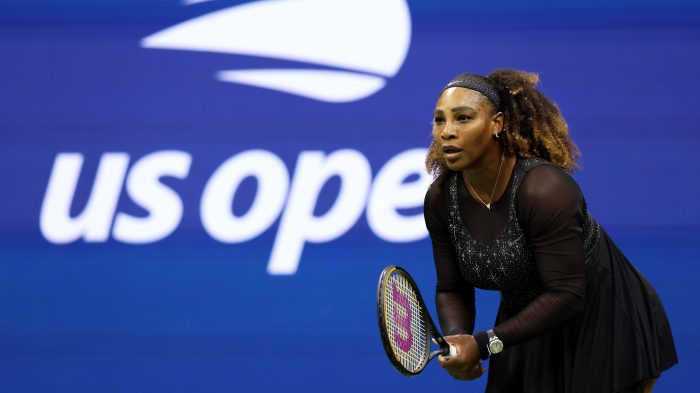 The weight of that divine pressure is common for women with the sort of singular talent that Williams possesses. Both Audra McDonald and Barbra Streisand, two of the grand divas of musical theater, have talked about their struggles with it. It can be debilitating, dizzying, paralyzing even, to recognize the adoration and expectation one’s public possesses for their idol, and to realize that idol is you. What if you screw up? What if you let everyone down? What if you wind up looking foolish? What if you prove your haters right?

When they can conquer that anxiety, something incredible happens: The door to a universe of possibilities opens, and it no longer feels terrifying to walk through it. Whether she gets her 24th Grand Slam singles title or not, Williams has done the hard part. She’s walked through the door, and she’s comfortable — cozy, even.

“Honestly, I never get to play like this since ’98, really,” Williams said Wednesday evening. “Literally, I’ve had an X on my back since ’99, so it’s kind of fun. I really enjoy just coming out and enjoying it and it’s been a long time since I’ve been able to do that.”