Rolling in the deep

Kids in Buffalo, New York, are busting stereotypes in the pool and school

Greenfield, Wisconsin, a suburb of Milwaukee, has a black population that barely registers over 2 percent. The median household income of the entire city ($50,311 in 2014) is nearly double that of black Milwaukeeans ($26,222). Over 90 percent of Greenfield adult residents have a high school degree, almost 10 percentage points higher than someone in Milwaukee.

Greenfield is just a 15-minute highway ride from Milwaukee.

Mike Switalski didn’t have many interactions with blacks — or any other people of color — growing up in Greenfield. He’s a self-described “typical white suburban kid” from an upper middle-class family who rarely went into inner-city Milwaukee, where most of the state’s black population resides. After graduating from Whitnall High School, he enrolled at the University of Wisconsin-Whitewater, which as of 2015 has just under 500 black students in a school of over 10,000.

Switalski, 45, is the founder and head coach of the Buffalo City Swim Racers (BCSR) in Buffalo, New York, a swim club dedicated to removing the barriers to swimming for “culturally diverse and underserved” students in the heart of Buffalo. He created the program in 1998 and has been heading it, on and off, for over a decade.

“African-American kids would get off the bus, go down the slides into water over their heads and the lifeguards would routinely have to jump in to save a child.”

He’s also one of the most unsuspecting faces of racial progress in America. Tall white guy with a receding hairline and a thick beard? Not what usually comes to mind. Though, in fairness, the face of teaching swimming to blacks may be Terrence Howard, so there’s that. Switalski, a former member of a renowned Milwaukee-area swim club, grew up thinking that everyone — like him — could swim, and it took a summer job in college as a lifeguard to open his eyes to one of the many disparities African-Americans face in this country.

“Every Wednesday, the park would be rented out to a church in the inner city. This bus load of predominantly African-American kids would get off the bus, go down the slides into water over their heads and the lifeguards would routinely have to jump in to save a child,” Switalski told USA Swimming in 2013. “A typical Wednesday night would include 15-20 jumps for each lifeguard.”

It was a life-altering moment. “It always stuck in the back of my mind that, well, maybe there aren’t people as fortunate as myself,” he recently said.

It’s been well stated over the past six years, but there’s a striking statistic when it comes to African-Americans and swimming: Almost 70 percent of black children can’t swim. According to a 2010 University of Memphis study, only 16 percent of black respondents had received a swim lesson from a “qualified instructor,” compared with 29 percent of white respondents. The numbers are even more dire for children who receive free lunch in schools — those who are more likely to be poor. And this lack of training leads to death, as a 2014 study found that black children ages 5-9 are almost three times as likely to drown as white children the same age.

With numbers like that, it’s no surprise Switalski had his coming-to-Jesus moment while lifeguarding in Wisconsin. Once he graduated from the Uinversity of Wisconsin-Whitewater (becoming a Division III All-American swimmer in the process), he moved to Buffalo in 1997 to coach a suburban swim club.

But one day he was approached by one of his kids’ parents, who was an assistant principal in an inner-city school, about starting a program in the city of Buffalo during the school year for those without access to lessons.

The school, Broadway Village Community Elementary 57 — which was both 99 percent black and low-income — had 660 students, and after sending out permission slips to all the parents, over 500 slips came back. “We felt that we were on to something.”

What started off as 15 kids and a $10,000 budget four years ago has ballooned tenfold into over 120 kids and a $100,000 budget for the 2016 calendar year (Switalski did leave the program from 2001-2010 to take a college coaching position, and the program folded until he restarted it in 2012). His kids, of which 75 percent are African-American, come in with barely enough swimming training to stand in the water.

“A whole bunch of students will put their hand up,” he told The Buffalo News about when he asks prospective kids if they can swim. “And you’ll ask them how. They’ll say, ‘At the splash pad.’ … So you say, ‘What you’re telling me is if I throw you in 12 feet of water, you’ll be able to get to the side of the pool?’

“Every hand goes down.”

This lack of swimming knowledge, coupled with innate fear from the children and their parents (a strong predictor of less swimming abilities, according to the University of Memphis study), is what leads kids to Switalski’s doorstep.

“The child, when they originally join us, has an inherited fear of the water from the parent.”

“The biggest thing that happens in our program is that we have so many families that join our program where a parent or both parents don’t know how to swim,” he said. “So, the child, when they originally join us, has an inherited fear of the water from the parent.”

One of Buffalo City Swim Racers’ many club goals is to enable “children with water safety skills that will last a lifetime,” and he begins that by just getting the kids in the water. Before they can actually compete, though, each swimmer has to be competent in at least three of the four competitive strokes (freestyle, backstroke, breaststroke, butterfly).

While some of the kids are a bit apprehensive before their first lesson, it doesn’t take much time for them to get hooked. “By the time they’ve completed their first week with us, they’re smiling, they’re eager to be here, they’re having fun, they’re ready to jump in the water and do whatever skills we’re working on that day, and they have the desire to come back. They show up on a regular basis,” said Switalski.

“Showing up” is just one of the many pillars of BCRS. When he created the program back in ’98, Switalski emphasized education in the face of dire academic statistics in the city.

Though Buffalo Public Schools graduation rates have improved over the years — surpassing the 60 percent mark last year for the first time in over a decade — the numbers are well below the national average (83 percent). Four years ago, the system’s rate was an abysmal 47 percent, and Switalski wanted to use swimming as a vehicle for change in a school system that’s almost 50 percent African-American.

Switalski, who’s now a physical education teacher at McKinley High School in Buffalo, allows the kids to come in as they are, whether they have good grades or not, but the expectation is to see progress by the end of the first year in the program.

“We want to try and be a part that turns a child’s academic career around. We want it to be that mechanism for change within that child.”

That means at least a 80 grade point average in all subjects, and at least a 90 percent attendance record at school. And for those who don’t meet those benchmarks, Switalski sits down with the swimmers and their parents to re-emphasize the expectations and discuss a contingency plan to get back on track (there are exceptions for kids with developmental disabilities).

The program has continued to grow and thrive over the years through donations and grants from various governmental departments, various individual contributions and fundraisers. The city of Buffalo, Erie County and the Buffalo Bills provide funding, while the local parks and recreation department allows access to public pools. USA Swimming, the national governing body of competitive swimming in America, has also contributed resources, while the USA Swimming Foundation — the “philanthropic arm” of USA Swimming — recently awarded BCSR a $4,000 grant.

Switalski also recognizes a “working board, an inspired group of volunteers, an awesome coaching staff, but most of all the group of resilient kids” as key contributors to BCSR as well. (You can also donate to the program here.) 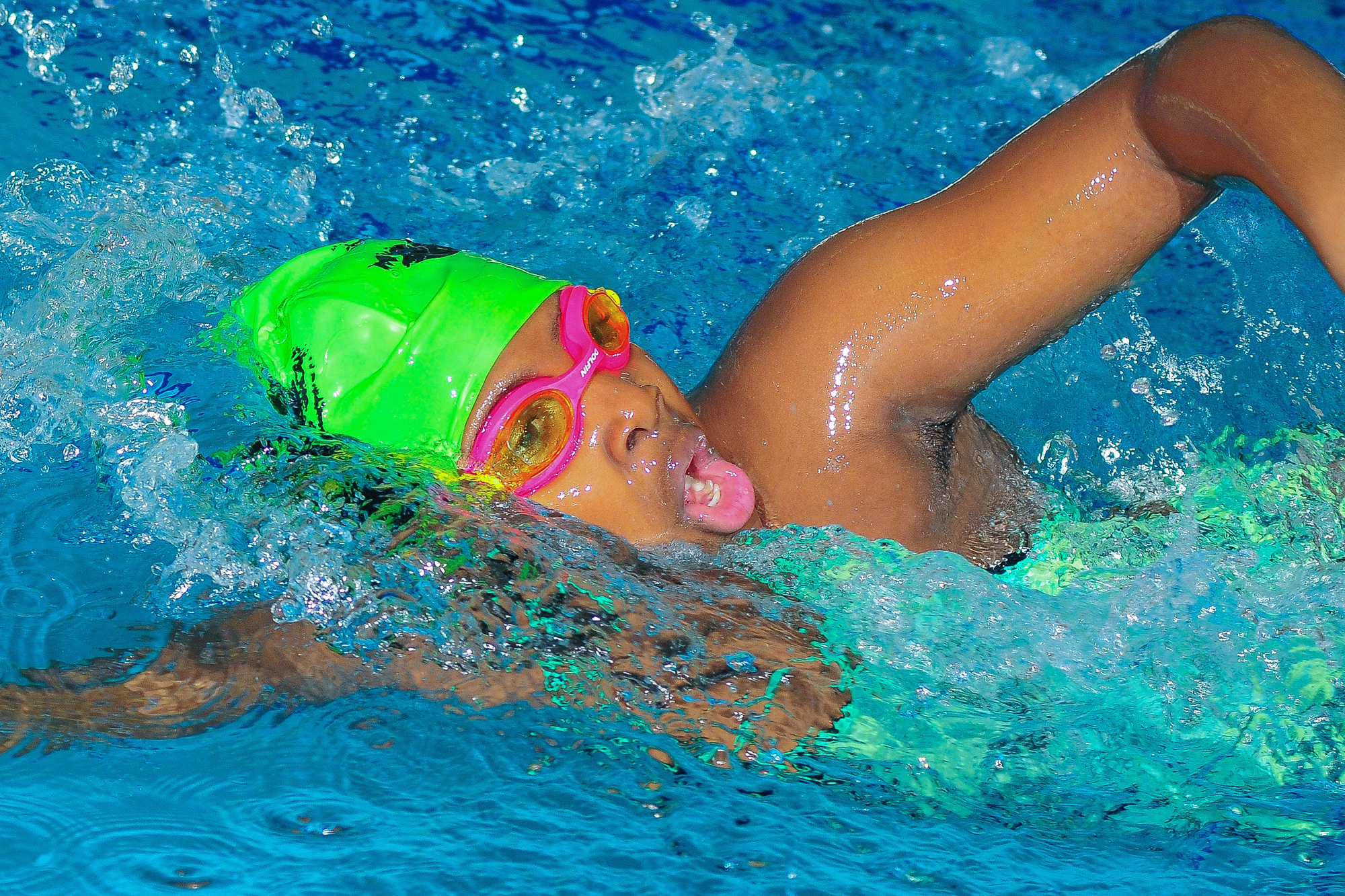 Over 20 years ago, a young Switalski was tasked with saving the lives of drowning black kids on a weekly basis as a lifeguard. He didn’t understand at the time why all these children couldn’t swim, seeing as everyone knew how. Through the years, though, he’s learned of the barrier to entry for people who don’t look like him, and how important it is for little brown boys and girls to learn how to swim. He’s dedicated his life to it.

“Basically, from 8 in the morning until 7 o’clock in the evening during the school year, I’m in a pool.”