Alpha Prime Racing announced that Caruth will drive its No. 44 Chevrolet in the Xfinity Series

It’s more than an hour before Rajah Caruth’s Wednesday morning world literature class, and there’s no way the 19-year-old Winston-Salem State sophomore is making it there before the classroom door shuts — no matter how fast he drives. But he’s in no rush because the class is on Zoom, which gives him time to set up in a quiet corner inside the Concord, North Carolina,m headquarters of Rev Racing, the driver diversity development team where Bubba Wallace, Kyle Larson and Daniel Suarez and other big wheels got their NASCAR Cup careers rolling.

World lit is one of four classes Caruth is taking this semester at the historically Black university while balancing a major in motorsports management with a blossoming career in the industry — an iRacing phenom tracking toward genuine crossover stardom. Online and asynchronous classes help with time management, but Caruth’s stacked schedule nonetheless makes for days that stretch from 6 in the morning to 11 at night. That doesn’t leave much time in between for marathon gaming sessions, suds-soaked parties or any of the usual college frivolities. “I’m kind of separated to an extent from my classmates,” said Caruth, a first-generation Caribbean American from Washington, “which kinda sucks. But at the same time, the friends that I have, they kind of have their feet dipped in whatever avenues they’re interested in being, too.” 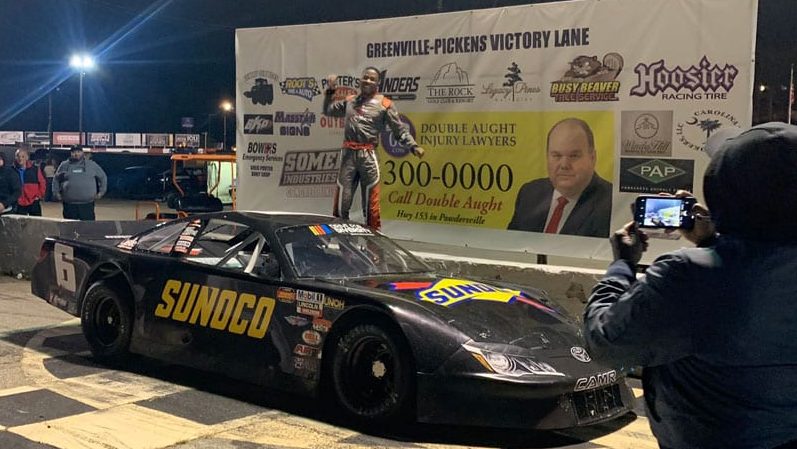 Rajah Caruth’s NASCAR career is in the fast laneRead now

In Caruth’s case, it’s his right foot that is stirring interest in the stock car racing world. After posting strong results in several late-model races for Rev, the team promoted Caruth was granted an opportunity to race late-model cars in the ARCA series (NASCAR’s equivalent to juco football). He proved to be quite the revelation, posting four top-10 finishes, including two inside the top five. At the Bush’s Beans 200 at Bristol Motor Speedway on Sept. 16, the season finale of ARCA Menards Series East, Caruth brought his Universal Technical Institute Chevrolet machine home in sixth place on the way to clinching third in the year-end point standings. Even more impressive: Caruth has only had his road driver’s license a few weeks.

But the surest confirmation of Caruth’s inexorable rise came in late August, when a reorganized single-car team called Alpha Prime Racing announced that Caruth would pilot its No. 44 Chevrolet machine for a selection of races in the Xfinity Series (NASCAR’s equivalent to SEC football). “I just see the raw potential there with him,” said Tommy Joe Martins, Alpha Prime’s 35-year-old co-owner and driver, “and the attitude and the demeanor, too.”

Most promising of all: Caruth comes along at a time when the desire to invest in drivers besides the young white sons of motorsports heritage has never been higher. The NASCAR season began with basketball great Michael Jordan launching a Cup Series team around Wallace, a diversity double play that likely doesn’t happen without Wallace taking a stand against the sport’s ties to the Confederate flag or without DoorDash, Columbia Sportswear and other nontraditional sponsors hopping aboard. Also last month: Jesse Iwuji, the Naval Academy varsity standout-turned-stock car racer, went public with his plans to partner with Hall of Fame tailback Emmitt Smith and launch an Xfinity team starting next season on which Iwuji will serve as driver and part-owner. All the while Hailie Deegan (the 20-year-old daughter of X Games motocross multimedalist Brian Deegan), Natalie Decker (a 24-year-old scion of snowmobile racing royalty) and Toni Breidinger (a 22-year-old Arab American) have seen their swift climbs up NASCAR’s development ladder eased along with help from deep-pocketed stakeholders in a rush to claim a piece of the vast female demographic that Danica Patrick owned before she retired at the end of the 2017 Cup Series season.

Of course, the idea of Caruth, the Black male standout from a virtual racing platform that provides an onramp into racing for youth drivers who lack the resources to turn real laps, breaking into the second-highest level of NASCAR can only seed dizzying expectations. And casual spectators looking for him to have his way on the track like some kind of Tiger Woods on wheels will surely be disappointed. NASCAR, despite its considerable efforts to cap engineering costs so the drivers’ talent can shine, remains a league of haves and have-nots. In an ARCA race, Caruth drives one of 16 cars. In the Xfinity Series, he’ll drive one of 40 cars that are also heavier and more powerful. The teams that run upfront most consistently tend to have the money for top-shelf equipment and personnel, as well as the flexibility to accommodate Kyle Busch, Kevin Harvick and other Cup Series champions when they want to drop down a level and swipe a victory from a driver on the come-up. 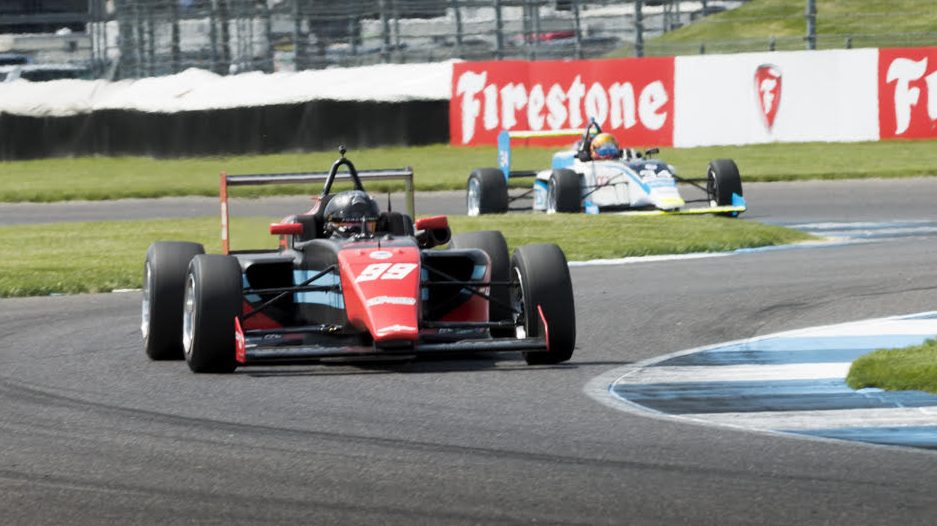 The single-car Xfinity team Caruth is going to, however, is in an altogether separate lot. For 12 years it operated primarily as Martins Motorsports, a venture Martins’ dad Craig started and eventually ran with Rodney Riessen, a longtime family friend and sponsor. And though they enter races with the aim of winning, they’re competing against teams that spend five times as much, or up to $7 million a year, on their Xfinity programs. With those harsh economic realities making true on-track parity a virtual pipe dream, Martins Motorsports measures itself against the mid-pack, treating finishes between 10th and 20th as race victories.

But after many wearying years of hustling for sponsorship dollars and even taking on pay drivers (who fund their car seat out of pocket or through personal sponsors), Craig Martins and Riessen (who nevertheless found themselves shutting their team down for two years) were ready to take a step back from the business. All the while Caesar Bacarella, the 45-year-old CEO behind the Alpha Prime athleisure wear and supplements company, was making his debut in ARCA and the Xfinity Series and winning an amateur class sports car championship behind the wheel of a Ferrari in 2018.

Instead of taking Bacarella on as a pay driver after Martins announced plans to run a part-time schedule in 2022, Martins Motorsports offered Bacarella, a canny marketer and fundraiser, a far better deal for both sides: an equity stake with his company’s name on the car. “I want to build something,” Bacarella said when the new venture was announced. “I love this sport. That’s why I do it.”

With two other drivers sharing the plucky No. 44 car, led by Martins’ 155 and counting Xfinity starts, there will be a different sort of pressure on Caruth to produce. “Realistically, we understand we’re probably a 15th– to 20th-finish car,” Martins said. “But if he really kicks ass, he could run in the top 10, potentially. And I don’t think he’s going to underperform.”

That’s because Caruth races under similar limitations at Rev, a perennial underdog that, to hear Caruth tell it, “is literally going against spaceships sometimes.” Nevertheless: In October, while racing for Rev, Caruth earned his first career victory at Greenville-Pickens Speedway in South Carolina. In April, he followed that up with a sweep of the late models’ double feature at North Carolina’s Hickory Motor Speedway, aka “the birthplace of NASCAR stars.”

In the big leagues, postrace victory celebrations are fratty affairs that give the driver license to revel in a shower of fizzy drink. But right now that’s not Caruth’s style. He just poses with his trophy and moves on to the next challenge. “I won’t get superhyped when things go right,” he said. “And when things go wrong, I won’t be super down. When the success does come, it fuels everybody at the Rev shop to keep working to show that when we do get all our ducks in a row, we can be even stronger than we already are.”

If Caruth seems overly studious in the way that he approaches his racing career, it’s because he can’t really help it. His mother, Samantha, is an assistant admissions director at Sidwell Friends, the distinguished Washington-area private school that once counted the daughters of former President Barack Obama as students. His father, Roger, is a Howard University communications professor. Hence how he became the sort of racer who not only approaches each lap as an education but likewise doesn’t mind getting his hands dirty helping engineers fine-tune his car between races. “He treats it like he’s going to college, not something he’s doing for fun,” Martins said. “He’s learning about the racing business, something I feel like a lot of other drivers in our series have absolutely no care about.”

But then again Caruth has to care more. He’s just the third Black driver in NASCAR’s top series, after all. “There’s an inordinate level of pressure on him that I’ve never had. I feel like he feels a responsibility with that, being an African American in a sport that is predominantly white. He understands that a mistake by him is going to be looked at differently than a mistake by a guy like me. But he’s just so cool and calm and handles it all spectacularly. He just wants to do it the right way.”

Caruth knows all eyes are on him. He can feel the eyes each time he sets foot on the track. “The double takes and stuff still happen, but I don’t really pay it any mind,” he said. “I’ve definitely had specific experiences, but it’s not that big of a deal. The way I think about it is I can’t control other people, so I’m just gonna do the best that I can to just … do the best I can.”

As a trailblazer, Caruth expects his learning curve will be especially steep. So he won’t rush success. He’ll take his time zooming around the track when he isn’t Zooming into class. He’ll keep learning everything there is to learn about the racing business. And he’ll stay on his grind in hopes of eventually making the grade and more history with it.