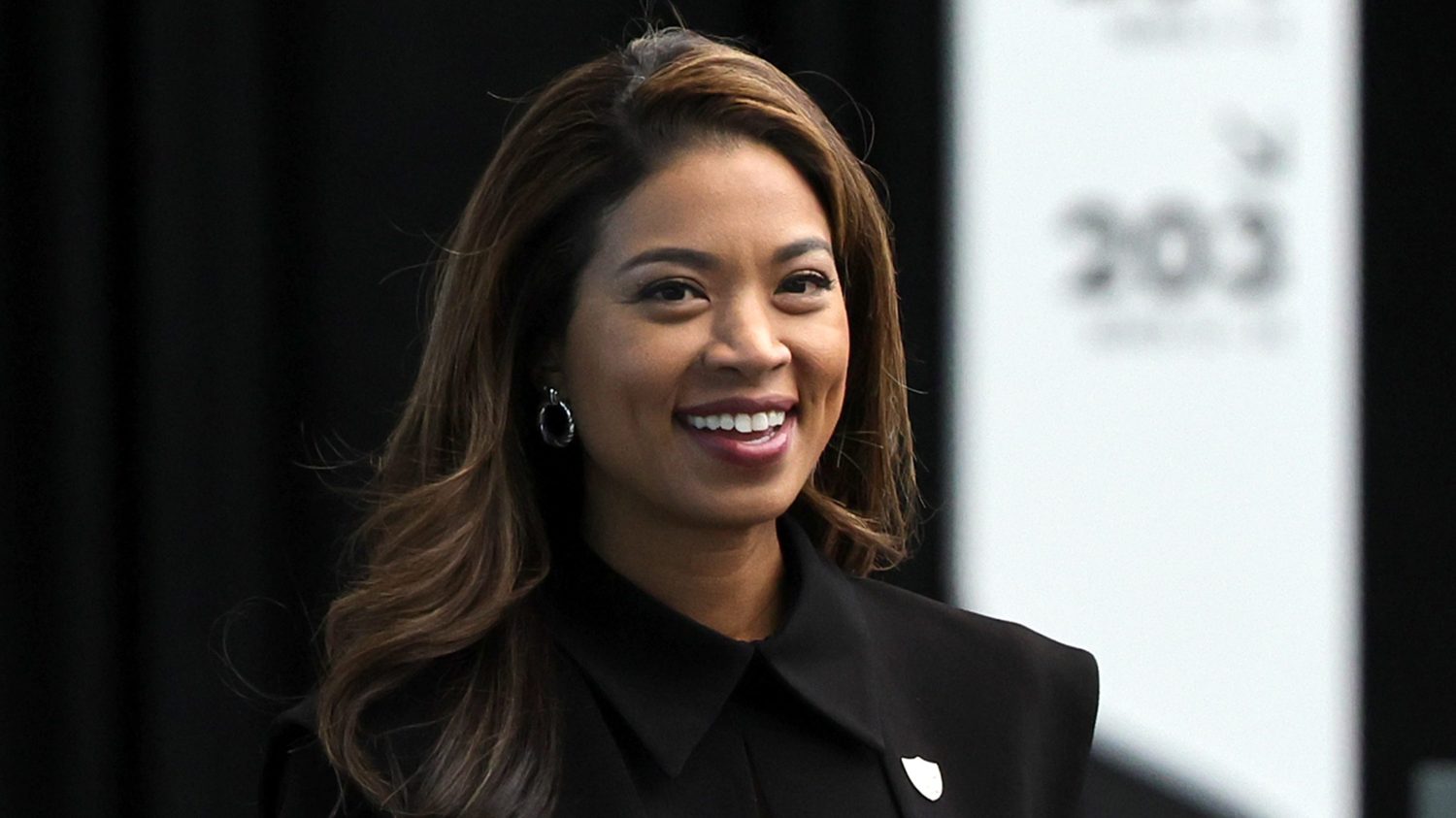 Douglass Morgan, the first Black woman to be hired as president of an NFL team, just wanted ‘to go in and show that we’re all capable’

HENDERSON, Nev. – Despite already being deep into her workday one afternoon in late July, Las Vegas Raiders president Sandra Douglass Morgan still had a packed schedule.

She had important club meetings to lead, key decisions to make immediately, and myriad matters concerning the short- and long-term direction of the franchise required her attention. With the NFL’s regular season fast approaching, Morgan, 44, is chiefly responsible for preparing the entire organization for kickoff. Ticket sales, luxury suites sales, advertising partnerships and the game-day experience of fans at the team’s home field – it’s all part of Morgan’s portfolio now. That and much more.

So much for easing into a new job.

Although Morgan, the first Black female club president in NFL history, had been in her groundbreaking role for only three weeks, she appeared to juggle everything as deftly as an accomplished quarterback would while directing a two-minute drill. Whip-smart and confident with the bona fides derived from being a trailblazer throughout her professional life, Morgan seems well-suited for her latest challenge, which is a big one.

Morgan takes the reins of the Raiders’ business operation after her predecessor, Dan Ventrelle, was sacked in a messy ouster that included allegations of retaliation for his role in alerting the commissioner’s office to allegations of a hostile work environment within the club (the NFL has launched an investigation). Reportedly, some female employees have alleged a pattern of harassment, forced demotions and unfair treatment. What’s more, the Raiders parted ways with former head coach Jon Gruden last October following reports that emails he wrote over a 10-year period included racist, misogynistic and anti-gay language.

To say the least, Morgan entered an organization in transition. Clearly, though, she wasn’t deterred by the headlines.

“I wanted them [team employees] to know that I’m coming in with eyes wide open and ears wide open, too. I don’t shy away from challenges and I’m not going to sweep things under the rug or hide from things.” – Sandra Douglass Morgan

The Las Vegas insider, who prefers to tackle problems head-on, saw an opportunity to contribute to a prominent organization in a city that has been her home since childhood, and she approached it the only way she knows how. In a letter to employees in which her hiring was announced, Morgan addressed the allegations of wrongdoing in the workplace, making it crystal clear what she expects from herself as she attempts to help the club move forward.

“I’m a direct person. I’m not going to kind of tiptoe around things,” Morgan told Andscape during a lengthy interview in her office at the Raiders’ sprawling headquarters and practice facility located about 16 miles southeast of Las Vegas.

“It’s no secret there has been turnover. … For me to come in and just talk about myself and say, ‘Looking forward to meeting you,’ and then moving on … that’s just not who I am. I didn’t think that would be genuine. I wanted them [team employees] to know that I’m coming in with eyes wide open and ears wide open, too. I don’t shy away from challenges and I’m not going to sweep things under the rug or hide from things.”

In a text message to Andscape, Brian McCarthy, NFL vice president of communications, said that the commissioner’s office is encouraged by recent additions to Raiders leadership, with Morgan’s arrival heading the list.

“The league has been reviewing with the club its workplace policies and practices,” McCarthy wrote. “The team is committed to fostering a professional and respectful environment for all of its employees and recently announced a new team president, Sandra Douglass Morgan, and new senior HR leadership who will provide strong leadership across all facets of the organization. We look forward to working closely with the Raiders and all clubs to ensure that our workplaces are professional, respectful, and inclusive, and give all employees an opportunity to grow and contribute.”

Jason Wright of the Washington Commanders, who in 2020 became the NFL’s first Black team president, believes the Raiders scored in hiring Morgan.

“Importantly, Sandra is almost comically OVER-qualified for this role: a brilliant legal mind, a legalized sports betting expert, an experienced CEO,”  Wright wrote to Andscape in a text message. “It’s a positive sign that her womanhood or her blackness didn’t give the Raiders pause and, I’d like to think, further separated her from the pack in a positive way, even though she didn’t need it.”

In selecting Morgan to be his top lieutenant, Raiders owner Mark Davis chose someone who has deep roots and strong political ties in the state the franchise relocated to in 2017. The two officially met about a year ago, Morgan said, and began discussing the team presidency after the position opened in early May. Morgan, whose family moved to Las Vegas when she was a toddler, attended high school in Las Vegas, completed her undergraduate degree at the University of Nevada, Reno, and received her law degree from the University of Nevada, Las Vegas. Allegiant Stadium, the team’s $1.9 billion home venue and the world’s second-most expensive stadium, is in Paradise, Nevada, next to the city of Las Vegas.

Morgan was the first African American to serve as chair of the Nevada Gaming Control Board (2019 to 2021), which oversees Nevada’s expansive gaming industry, including gaming licenses, audits, investigations and enforcement. In a previous role as the city attorney for North Las Vegas, Morgan, who’s also of Korean descent, was Nevada’s first African American city attorney. The pioneer also held several top positions in the private sector in Las Vegas.

“Because of my other roles, I’ve had a chance to meet a lot of business leaders, obviously, in the gaming industry, airline industry and government leaders as well,” said Morgan, a member of Alpha Kappa Alpha Sorority, Inc. “I hope that those relationships, which I established prior to joining the Raiders, gives the team here a little sense of comfort that I’m not someone who’s coming in off the street and don’t know what I’m doing.”

The glass ceiling she shattered in the NFL, however, ranks as her highest.

The league was founded in 1920. It only took about 102 years for a Black woman to occupy a team president’s office.

“I wasn’t going in hoping to be the first. I just wanted to go in and show that we’re all capable.” — Sandra Douglass Morgan

Obviously, by joining the Raiders, Morgan realizes she has kicked open another door, but she “underestimated the impact, honestly, when I accepted the role,” she said. “As I meet people with different teams and even people outside of the sports environment, and they tell me how happy and proud they were when they saw my announcement, you do [realize it] more. I wanted to go to work and not think about other things that would take my mind off the job that I have here. So maybe I was being a little intentional not thinking about it much.

Beginning with Davis’ late father, maverick Raiders owner Al Davis, the franchise has been an industry standard-bearer in inclusive hiring.

In 1989, Al Davis promoted Art Shell from offensive line coach to head coach, making Shell the first Black head coach in the league’s modern era. Onetime club CEO Amy Trask was the first woman to occupy that post in the NFL, and Tom Flores, who led the franchise to two Super Bowl championships, was the league’s first Hispanic head coach to win a Super Bowl. Mark Davis, who hired Morgan and previously hired a Black general manager, has added to the franchise’s notable legacy in that area (in 2018, the NFL cleared Mark Davis of allegations he violated the Rooney Rule in the hiring of Gruden).

Of the 17 highest-ranking officials in NFL Football Operations, nine are Black. Eight of the nine have vice president-level titles or higher, and the group is led by a Black man: Troy Vincent, executive vice president of football operations.

For proponents of inclusive hiring in the league, though, the story at the club level is far less encouraging.

In February, Brian Flores, a Pittsburgh Steelers assistant coach who was fired in January after three seasons as the head coach of the Miami Dolphins, sued the NFL and three teams (the Miami Dolphins, Denver Broncos and New York Giants). Flores, who is Afro Latino, alleges discrimination regarding his interview process with Denver and New York and his firing by Miami.

The suit, which was filed in a federal court in Manhattan, and seeks class-action status, was joined in April by longtime NFL coaches Steve Wilks and Ray Horton, who are both Black. Once Wilks and Horton teamed with Flores, new allegations of racism against the Houston Texans, Arizona Cardinals and Tennessee Titans were included in the lawsuit.

Both while addressing media members and behind closed doors, Goodell has pushed team owners to provide more opportunities to women and qualified minority candidates – especially at the highest rungs of their franchises. In NFL history, there have been four Black team presidents. All were hired during Goodell’s tenure in the past two years, including three in the last six months. The commissioner deserves much of the credit for the league’s significant progress on that front, Vincent believes.

“Under the commissioner’s leadership, very intentional efforts have been taken on club and league education, diversity planning, policy refinement, talent identification, pipeline development, data collection from all clubs and league locations, as well as comprehensive reporting,” Vincent wrote in a text message to Andscape. “All this lends to the collective effort of diverse men and women being hired at the club executive level. Frankly, no other commissioner in professional sports has embodied this level of work to drive change with the results we are seeing at the highest executive level of member clubs. We have a lot of work yet to do, but with strong leadership, there is progress.”

And it’s a fact that Morgan’s impressive story is now a big part of that progress. However, this much is also true: When it comes to inclusive hiring at the club level in the NFL, a boulder is still being pushed up a big hill slowly.