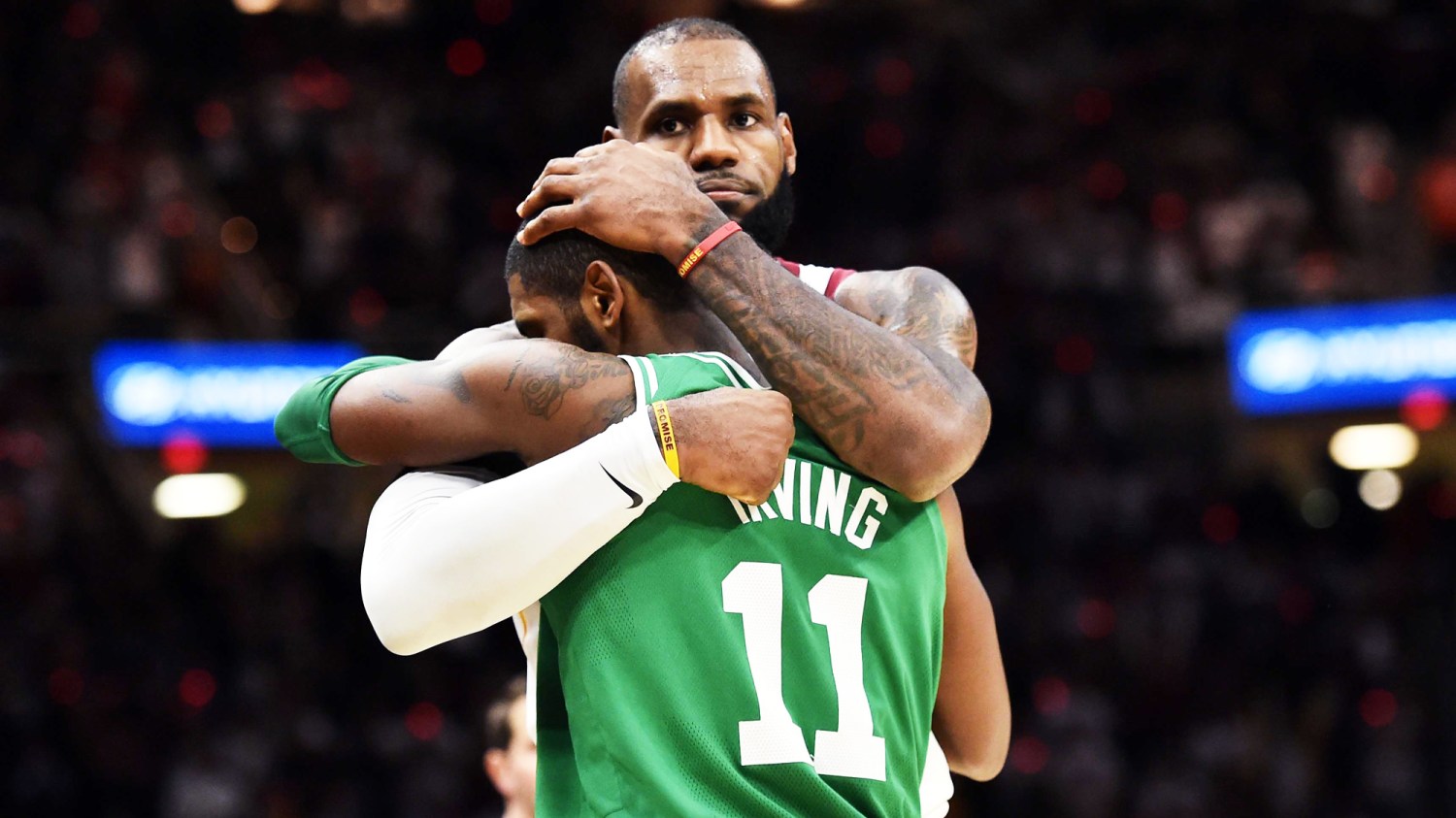 LeBron, Kyrie and the complicated history of black fathers and sons

James is used to getting the big piece of chicken, but Irving didn’t need another father figure

CLEVELAND — An NBA locker room is one of the ultimate manifestations of black manhood. Something went wrong in the Cleveland Cavaliers’ inner sanctum last season, which is why boos rained down on Kyrie Irving as he began the season Tuesday night wearing Celtic green.

We now know that Irving felt suffocated in LeBron James’ shadow and wanted a team to call his own. The breakup also was about NBA manhood — about respect and resistance, deference and dominance, loss and leadership. And those expressions of manhood rest on the complicated, often troubled history of black fathers and sons.

James and Irving largely avoided each other Tuesday, like a Thanksgiving where the son returns home with a girlfriend the father doesn’t like. They left the game the way they entered it: James as the father figure, coming one assist shy of a triple-double as he orchestrated the Cavs’ 102-99 victory, and Irving as the rebellious son, with 22 points and 10 assists.

Their actual fatherhood experiences have been very different.

James was born to Gloria James when she was 16. His father didn’t stick around, and James had zero relationship with his dad. He responded to this void by willing himself to become not only the greatest basketball player on the planet but also a husband, father of three children, philanthropist and role model.

Irving’s father, Drederick Irving, was a star basketball player at Boston University, where he met his wife, Elizabeth. Drederick Irving played professionally in Australia, where Kyrie was born. Kyrie’s mother died when he was 4 years old, and Drederick, who had been abandoned by his own father, raised Kyrie and a daughter by himself.

Drederick Irving guided Irving every step of his career, from high school phenom to Duke one-and-done to first pick in the 2011 NBA draft, when Drederick was at his side. “I can’t even explain in words how much he means to me,” Irving said before he was drafted.

Kyrie has a great father. He didn’t need LeBron to play the father figure in Cleveland.

“He’s saying he’s not about to let LeBron ‘son’ him … treating him like he’s the child and LeBron’s the father or big brother,” an Irving confidant told Stephen A. Smith about the departure.

“Son him,” meaning to humble, dominate or disrespect another’s manhood. Such a loaded piece of slang the black community has created. Why wouldn’t to “son” someone mean to love him?

Maybe it’s connected to the fact that 70 percent of black mothers are unmarried when they give birth, compared with 29 percent of whites and 53 percent of Hispanics, according to the latest government data. And that children of this 70 percent are more likely to get arrested, have trouble in school, become teen parents, or experience behavior and health problems.

This is not to disrespect black single mothers or co-sign the falsehood that missing fathers are the root of all evil in the black community. Our black families have been torn apart by outside forces, from slavery to mass incarceration. Single moms are heroes in black America. Many unmarried black dads are all the way there for their children.

James was an involved parent when his first two sons were born before he married their mother, Savannah, in 2013. Their daughter was born a year later. Irving has said he wants to be an involved father to his almost 2-year-old daughter, who lives in Texas with her mother. They split up before the baby was born.

“Son him,” meaning to humble, dominate or disrespect another’s manhood. Such a loaded piece of slang the black community has created.

The twists and turns of Irving’s and James’ stories show that black manhood is a multifaceted thing. But it’s indisputable that far too many of us in the black community grow up without strong fathers. That disadvantage derails lives. Now “son” has been transformed into an insult.

The sonning of Irving was never clearer than when this season began with media day on Sept. 25.

James, 32, trying to say nice things about his departed 25-year-old teammate, called Irving a “kid” five times. Irving responded that he was all grown up now: “It’s really between two men. … That’s between two men,” he said.

I asked retired NBA player Grant Hill what he thought of that exchange.

Hill grew up with his father, Calvin, a Yale graduate and former All-Pro NFL running back, and his mother, Janet, a management consultant who went to Wellesley with Hillary Clinton. When he reached the NBA, “it helped to have someone in my corner to offer perspective, insights, advice, and to hold me accountable,” Hill said. “Someone who’s going to be honest with you, tell you what you don’t want to hear, tell you when you’re wrong.”

Tough love can come from many places other than a father, but nobody can deliver it with more weight. And inevitably, the son will bump up against the father’s will. “You start to come into your own, form your own thoughts, develop a sense of independence,” Hill said. “It’s something normal, something healthy.”

Hill’s experience of having to confront a father’s manhood is missing from many boys’ lives. This experience might have helped James’ relationship with Irving.

James says he became the man of his house at age 8. He did have some substitute dads growing up, coaches and other community members, in the long-standing tradition of the extended black family. But he never had to exist in his father’s shadow, defer to his decisions, submit to his judgment. James always got the big piece of chicken.

One of the toughest tasks for any father is knowing when to let the son take the lead. Perhaps James didn’t give Irving enough room. And he couldn’t relate to his frustration — to the point that he was puzzled by Irving’s trade request.

“I was wondering if it was something I could have did better to make him not want to be traded,” James said.

Much has been made of Irving being drafted to resurrect the Cavs, and then having James snatch back the keys to the franchise in his ballyhooed return to Cleveland. Yes, Irving left because he needed control of the basketball. He also didn’t need another father figure.

A reporter once asked Irving what kind of parental role James played for the Cavs. Irving laughed, not in a humorous way, and said, “I have one father; that’s my dad, Drederick Irving.”

That’s something James, even with Tuesday’s victory over the “kid,” can never know.