‘I was just flattered and honored to have this come my way, and that I was entrusted with helping to tell this story’

LOS ANGELES — When filming a walk down NBA Lane to celebrate the league’s upcoming 75th anniversary, director Rick Famuyiwa rolled cameras at Universal Studios and CBS’ backlot. But, the Los Angeles native thought — with the predominantly Black NBA in mind — that it was important to add soul, too, by bringing NBA greats past and present to South Central Los Angeles’ Leimert Park neighborhood.

“There are these Black neighborhoods in LA that are sort of a foundation of my experiences,” Famuyiwa told The Undefeated recently. “And so, growing up in LA, but also growing up a big Laker fan, when we talked about the neighborhood of the NBA and the kinds of places that both the players touch and the players would, I guess in theory, live in this neighborhood that connects 75 years of the history, it was the kind of vibe and the kind of spot that I felt would be right.”

To promote the NBA’s 75th anniversary, the NBA made a short film called NBA Lane, which is a metaphorical neighborhood fitted with the league’s personalities and top moments to help the fans reminisce about the league’s history.

Throughout the trip down NBA Lane, you will encounter some of the greats of the past, current superstars and future stars. During filming at Leimert Park, such current NBA players as Carmelo Anthony, LaMelo Ball, Devin Booker, Anthony Davis, Kawhi Leonard and Jayson Tatum took part. Former NBA greats Gary Payton, Isiah Thomas and Jerry West also were involved in the three-day shoot last month.

“Just reflecting on 75 years and all the teams and players, it is an honor to be a part of 75 years. It has always been a dream of mine to be in the NBA. I was honored when they asked. It’s a big deal,” Tatum told The Undefeated.

This season the NBA will also announce its Top 75 players in league history as picked by a select panel. Anthony, who will enter his 19th NBA season with the Los Angeles Lakers next month, was very proud to be a part of the filming. 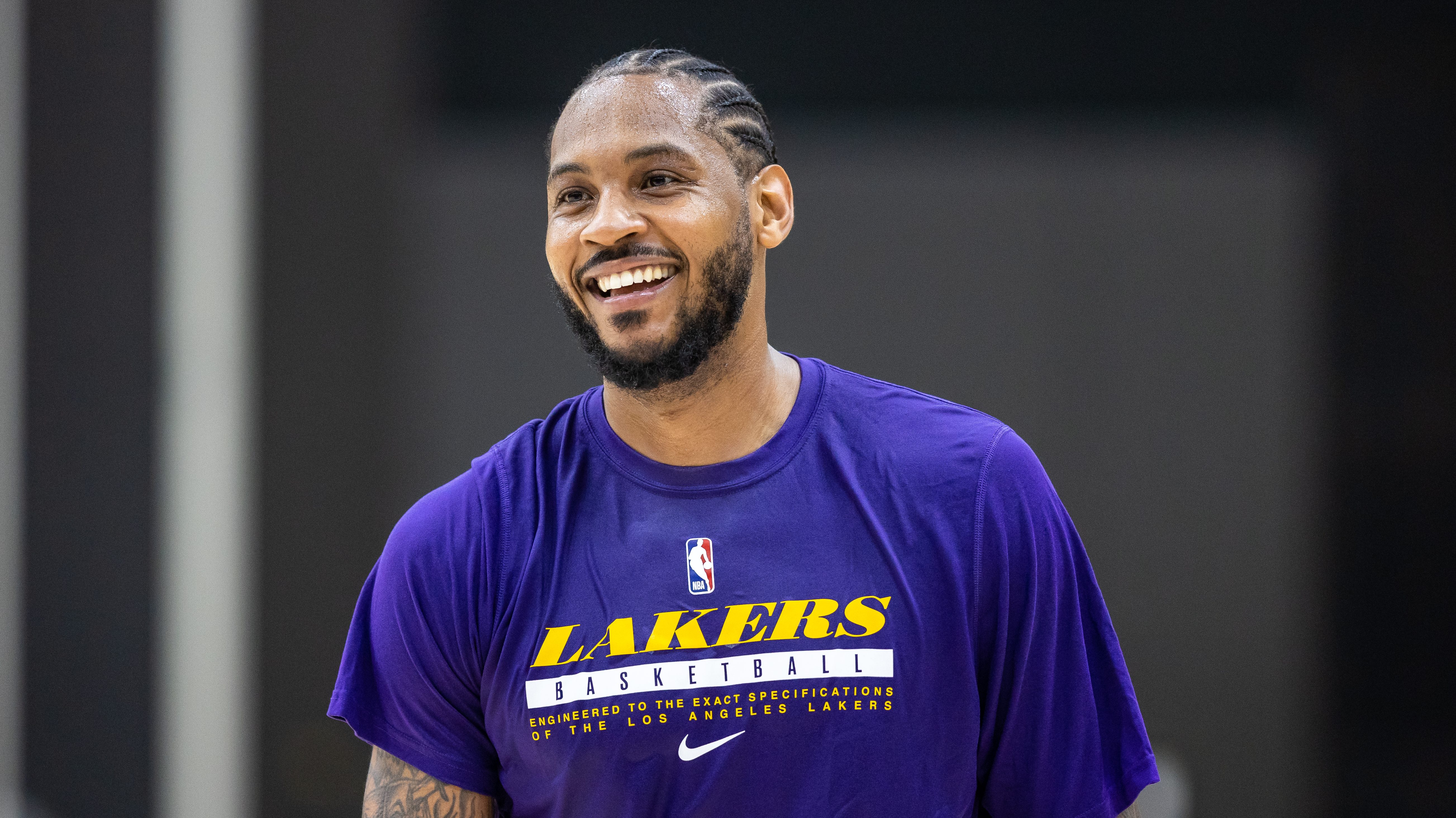 Carmelo Anthony on teaming up with LeBron James: ‘I think it was meant for it to happen at this point’Read now

“It’s history. Seventy-five years of anything is a lot,” Anthony told The Undefeated. “But for the NBA and basketball in general, that’s definitely a major milestone. And for me personally, to be almost 20 of the 75 is a different perspective. So I had to be a part of this.”

Famuyiwa was attracted to Leimert Park due to its rich Black history that’s still strong today. The 230-acre plot of land is known for being a historical and contemporary hub of Black art, culture and music in Los Angeles. There are several Black-owned businesses as well as a lively poetry hip-hop scene. Famous Leimert Park residents include legendary singers Ella Fitzgerald and Ray Charles, and former LA Mayor Tom Bradley. Many of the local residents stood nearby to watch the filming.

An intrigued Davis, who is entering his third season with the Lakers, asked Famuyiwa about the neighborhood during his film shoot, a place where the Lakers and LA Clippers have hosted community events.

“There’s always been such a warm and kind of an artistic center and an energy around Leimert that I always felt was like the heart any kind of community has to have,” Famuyiwa said. “And so I was excited about bringing that to the screen, even if we weren’t saying that it was Leimert, the idea that that would be a foundational element was important. And it was great that the league and everyone sort of saw that and felt like it added the same kind of character and texture that the piece needed.

“And I was excited to be back there shooting, because going back to college, I spent a lot of time there. There was a spot called The Good Life, which was this open mic hip-hop spot that was right there in Leimert where a lot of people would come together from all walks of life as the sort of art form was really taking a foothold in the city. It was good to be back and just be in that element, but then have the NBA and these great players be there, too.”

Famuyiwa is most known for being director, producer and screenwriter of productions including The Wood, Brown Sugar, Talk to Me, Our Family Wedding, Dope, Confirmation and The Mandalorian. The Nigerian American’s inspiration for writing and directing The Wood in 1999 came from his upbringing not too far from Leimert Park in Inglewood. Famuyiwa said he sat in the nosebleeds at the old Forum in Inglewood while attending a handful of games during his youth. In junior high, he said, he also played in the championship of his junior high basketball league before a Lakers home game against the Detroit Pistons.

“I grew up playing hoops, so basketball has always been sort of a foundational element in my life,” Famuyiwa said. “It taught me a lot about life and teams and cooperation that I still use in my profession today. And then I grew up in Inglewood in the height of the ’80s and ’90s as the Lakers had a dynasty and then in the 2000s, when they had another one.”

Famuyiwa is a huge Lakers fan who wore a black Lakers Magic Johnson jersey during one day of filming. The Clippers will open a new arena in Inglewood in 2024. Famuyiwa starred as a small forward at St. Bernard High School in the Los Angeles suburb of Playa Del Rey. A childhood friend was once quoted in The Los Angeles Times saying that Famuyiwa used to be able to dunk like Michael Jordan.

Famuyiwa said he turned down some full basketball scholarships from mid-major Division I programs to attend the University of Southern California in hopes of being a part of its famed film school.

Famuyiwa walked on to the Trojans’ men’s basketball team coached by Hall of Famer George Raveling. The 6-foot-4 forward went scoreless in eight games for USC during the 1991-92 season, and scored just 2 points on two shots and grabbed 4 rebounds in 11 minutes during the 1992-93 season. The 1992-93 Trojans won a school record-tying 24 games and finished ranked eighth nationally before losing on a half-court buzzer-beater against Georgia Tech in the second round. Famuyiwa left USC’s basketball team following the 1992-93 season after being accepted into film school.

“I got hooked up after applying to film school. And my hoop dreams … well, I knew my hoop dreams had come to an end well before that,” Famuyiwa said.

During his senior year in 1995, Famuyiwa wrote and directed his critically acclaimed thesis film called Blacktop Lingo, which was a 12-minute short film about basketball. With Famuyiwa’s love of basketball in mind, it didn’t take long for him to say yes to the NBA Lane project.

“I was just flattered and honored to have this come my way, and that I was entrusted with helping to tell this story,” Famuyiwa said. “So, for me, it wasn’t even anything. It was kind of a dream to have all these things come together and to be able to bring the passion for film that I have now to it. It was almost like a perfect scenario to jump into and I was thrilled from the very beginning.”