Bethune-Cookman barely misses out on being No. 1 again

A look at the marvel and majesty of HBCU bands, their culture, their universities, the personalities and performances that make them so unique.

There is a new top band in this week’s ESPN/The Undefeated HBCU Band Rankings, and it’s the North Carolina A&T State University Blue and Gold Marching Machine, which bumped Bethune-Cookman from the top spot.

It was a very close vote from the nine judges in the second ranking of the season, and the change occurred after the Aggies actually faced off against the previous No. 1 Bethune-Cookman in Greensboro, North Carolina, on Oct. 21.

This week’s rankings shuffled the previous Top 10, with Alabama State and Texas Southern falling out and Grambling State and North Carolina Central making it in at Nos. 8 and 9. Unlike football rankings, the judges are looking at new material and performances on each band before each ranking. The evaluations are based on the new music, formations and design for each adjudication.

What bumped the Blue and Gold Marching Machine to the top position? The quality and performance of its dancers, the Golden Delights.

“I attended the Bethune-Cookman versus North Carolina A&T football game, so I was anxious to see how the panel would rank the two bands,” said Don P. Roberts, who serves as executive consultant for the rankings committee. “While Bethune-Cookman’s overall band performance was rated higher by the judges, it appears that the outstanding auxiliary corps of dancers and flags was what put A&T on top of the overall rankings.”

The rankings evaluate bands on musicality, drill design, percussion, auxiliary corps, drum majors and other key factors. Each week, judges will review video content from a secure site to make recommendations for rankings.

The top band selected after each ranking will be featured on ESPN performing the SportsCenter theme song until the next evaluation takes place. Bethune-Cookman, N.C. A&T and Grambling State University have already been featured on the Saturday morning SportsCenter for the past few weeks.

“People should not make these rankings into a competition or compare them to athletic rankings. Unlike football, these rankings are based on a different performance each time, and not a collective body of work,” said Roberts.

“A band could be in the top 5 one week and not appear in any category the next time around. For bands such as B-CU, N.C. A&T, Southern and Jackson State to be in the top 5 for two rankings says a lot about the consistent quality of their programs. Take a look at Miles College, who did not appear in the polls last week, but were top 5 in what I consider the most respected category of musicality. Way to go, Morgan State.”

This season, there are four rankings: This is October’s second ranking, and there will be one each in November and December. In 2018, weekly rankings will be released at the start of the season. This year, only the MEAC and SWAC bands will be ranked. In 2018, all historically black college and university (HBCU) bands will be included in the rankings.

There are several bands that aren’t in the current rankings but are in the “on the rise” category. They are Hampton University; Alcorn State; Alabama State; University of Arkansas, Pine Bluff; South Carolina State; Howard; Texas Southern; Mississippi Valley State; Delaware State; and Savannah State. Also, the most improved band was Morgan State. 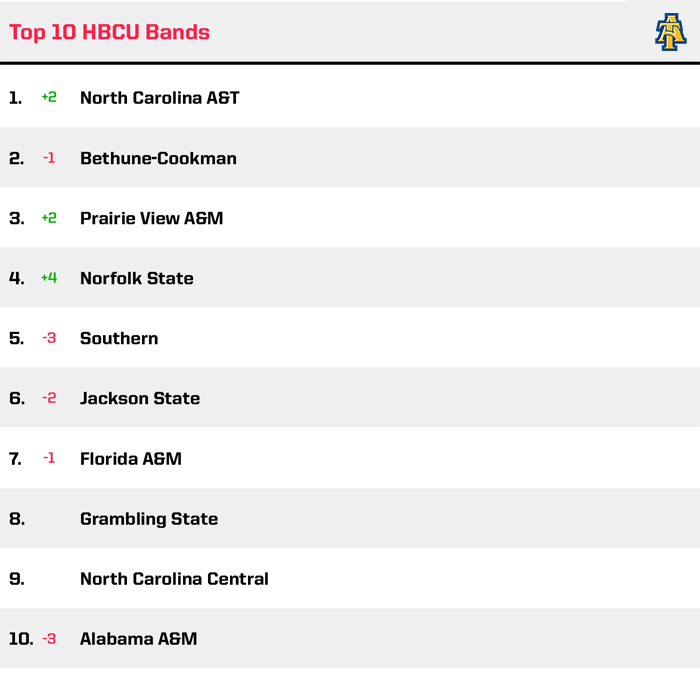 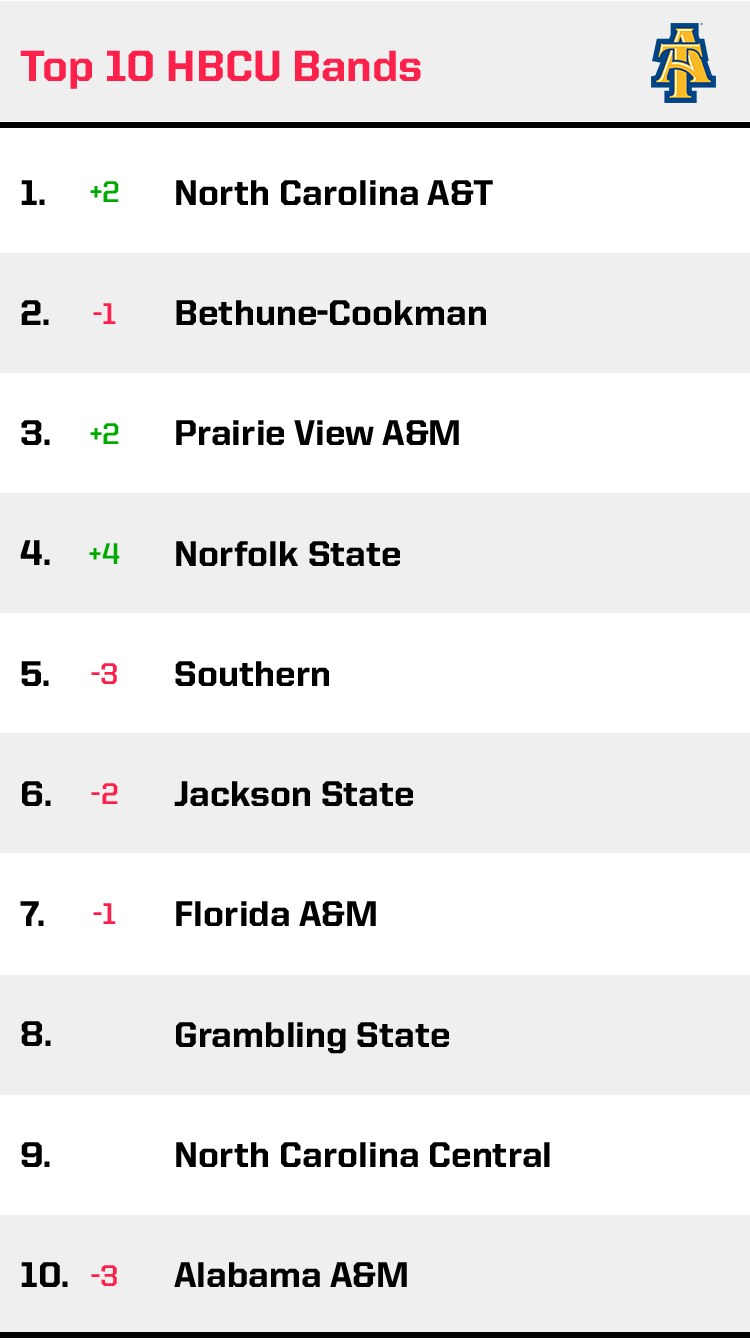