Earlier this week, NBA superstar LeBron James called the media out on their bias. “I was wondering why I haven’t gotten a question from you guys about the Jerry Jones photo,” he said during a postgame news conference, taking the media to task for the difference in how they handled Brooklyn Nets guard Kyrie Irving’s recent suspension for posting a link to an antisemitic film versus the conversation about the presence of a teenage Jones in the photo of a jeering white mob surrounding Black students attempting to integrate his school in 1957. The move not only reinvigorated the conversation about the Dallas Cowboys owner’s hiring practices, but it also highlighted the difference in how Black people and white people are publicly held accountable for their actions.

Black pain, self-inflicted or not, has been monetized to fuel engines like the media for years. Meanwhile, white bigotry is often defended as a relic of a bloody, but distant, past. And if it does come up in conversation, white folks have historically been given passes for their bad acts on account of their age or maturity level in a way that simply has never existed for Black people.

There was a lot more James could’ve said Wednesday night. But leaving it at a question, in a lot of ways, rings loudest. James, a former Dallas Cowboys fan and one of the most outspoken athletes in the world, was offended that he wasn’t asked to speak on a white man’s transgressions that clearly dealt with the existence of Black people in America, but he was expected to comment on a Black man’s actions that harmed another community. In both cases, the target was Black people. And therein lies the problem that has existed before James was born.

James has served as an entry point into matters of race in America for most of his 20-year NBA career — he’s also been in the public eye and subjected to scrutiny since he was a teen. So when the four-time league MVP brought up what he perceived as media bias, the conversation was about far more than what was bothering the Lakers superstar at that moment. Instead, James ushered in a discussion about the shifting metrics for what accountability looks like between white and Black folks in America.

“When the Kyrie thing was going on,” James told reporters, “you guys were quick to ask us questions about that.”

James knew the answer before he even asked the question. But he still took a moment to call out the psychological battle that’s plagued the Black community for generations: Why aren’t white folks held accountable like Black folks in somewhat similar circumstances?

“Whataboutism” has, at least with the rise of social media, become a flawed method of debate when discussing societal issues of the day. Irving to Jones isn’t an apples to apples comparison, but the discrepancy in outrage was starkly different. Yes, Irving sharing antisemitic material was unequivocally irresponsible and harmful — the same goes for Amazon’s refusal to stop selling the documentary on its platform. And yes, Irving deserved to be held accountable for his actions (he was suspended for eight games). But while the picture of Jones standing near the entryway of his high school as Black students were attempting to integrate it was taken when he was 14 years old, the more important question is: Why does that matter? America has historically protected its white children, despite their misdeeds, while inflicting carnage on Black children has been part of the fabric this country has woven since the beginning.

There is ample room to hold Irving accountable — which James and many others did following his suspension — while questioning just how much Jones has changed in the decades since he was standing in the hallway at North Little Rock High School watching Black students being forcibly turned away. What Jones was actually doing at that moment in 1957 is irrelevant. Today, he’s one of the most successful business executives in America and is the most powerful team owner in the NFL. Yet, the conversation around his beliefs (past and present) and how they bleed over into how he runs the Cowboys should absolutely be in play (this is largely the focus of The Washington Post feature where the photo was published). 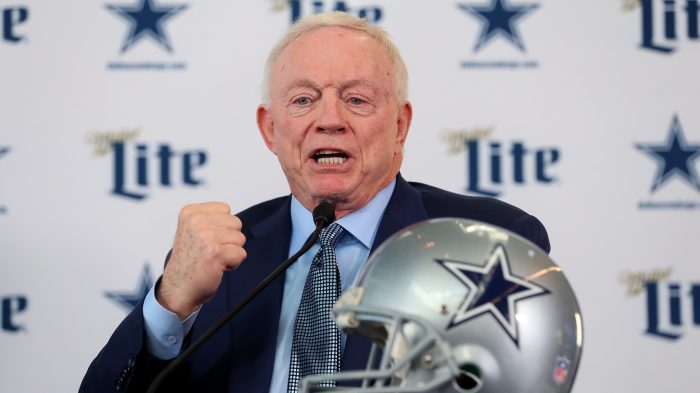 Jerry Jones was not innocent, then or nowRead now

Throughout Jones’ tenure as owner of the Dallas Cowboys, players have generally spoken highly of him. Jones understands that those players, many of them Black, have helped transform the Cowboys from a laughingstock into the multibillion-dollar franchise it is today. Still, there’s a surplus of real estate to talk about racial discrimination and its impact on “America’s team.” In its feature, the Post asked every NFL owner about the dearth of Black head coaches in an overwhelmingly Black league. Jones was the only one to agree to an interview, even if his responses seemed to reveal he’d much rather avoid the issue.

To date, 13 NFL teams have never had a Black head coach — that includes the Cowboys. Jones said while diversity was important to him, he had not hired a Black head coach because he only picked men he knew. When it came to the photo, Jones’ response stemmed from not truly understanding the magnitude of the moment. He was curious about what was happening, he said, and wasn’t the ring leader. Essentially he chalked the incident up to his age, and many people were willing to brush it off because of it. “I’m sure glad that we’re a long way from that,” Jones told The Washington Post about the incident in North Little Rock.

But have we really moved on? During his remarks, perhaps James should have also mentioned the mass shooting at a supermarket in Buffalo, New York, in May by a white gunman who purposely targeted a Black area of town. Or how Travis and Greg McMichaels were sentenced to life in prison in August for the hunting and killing of Ahmaud Arbery in Georgia. Or he could have brought up that last week, a white woman calling her Uber driver her “slave” and the N-word.

Part of James’ point when he addressed the media was to highlight its inconsistency. While Irving was made to account for his actions and reasoning (and given a very public multi-point plan to make amends), Jones was able to sidestep the issue and seemingly move on.

Accountability in America has never been a two-way street. What was happening in that photo of a young Jerry Jones in 1957 still happens in 2022, and will continue to happen in 2023 and beyond. Racial reckonings in this country only serve as a glimpse of a future that, in a lot of ways, looks just like the past.