Langston Galloway’s priorities have changed. He wants to make sneakers rather than collect them.

He’s all-in on Ethics, the independent shoe company co-founded by the eight-year NBA veteran with his wife, Sabrina. Want proof? Galloway is selling off most of his sneaker collection. The currently unsigned guard had 4,000 pairs of shoes. One tour of his collection on YouTube — oh, there are plenty of shoes — spans three parts, an epic in leather and laces. “I just really want to focus on Ethics,” he says without a trace of regret.

Galloway’s love for kicks ran deeper than taking the court in unique customizations featuring portraits of everyone from Lloyd Christmas and Harry Dunne in Dumb and Dumber to Los Angeles Lakers great Kobe Bryant and his daughter Gianna. Fascinated by how sneakers work, he would cut his retired game shoes in half, taking note of the cushioning and “the small nuances” employed to make a shoe lighter. He keeps a sketchbook full of ideas.

When Q4 Sports, where he had a shoe deal, wouldn’t give him creative control, Galloway, 30, knew it was time to create what had lived only in dissected shoes and flashes of inspiration on paper. He knew what worked. After all, his livelihood depended on what he was wearing on his feet.

To transform that dream into something tangible, he turned to a familiar face. 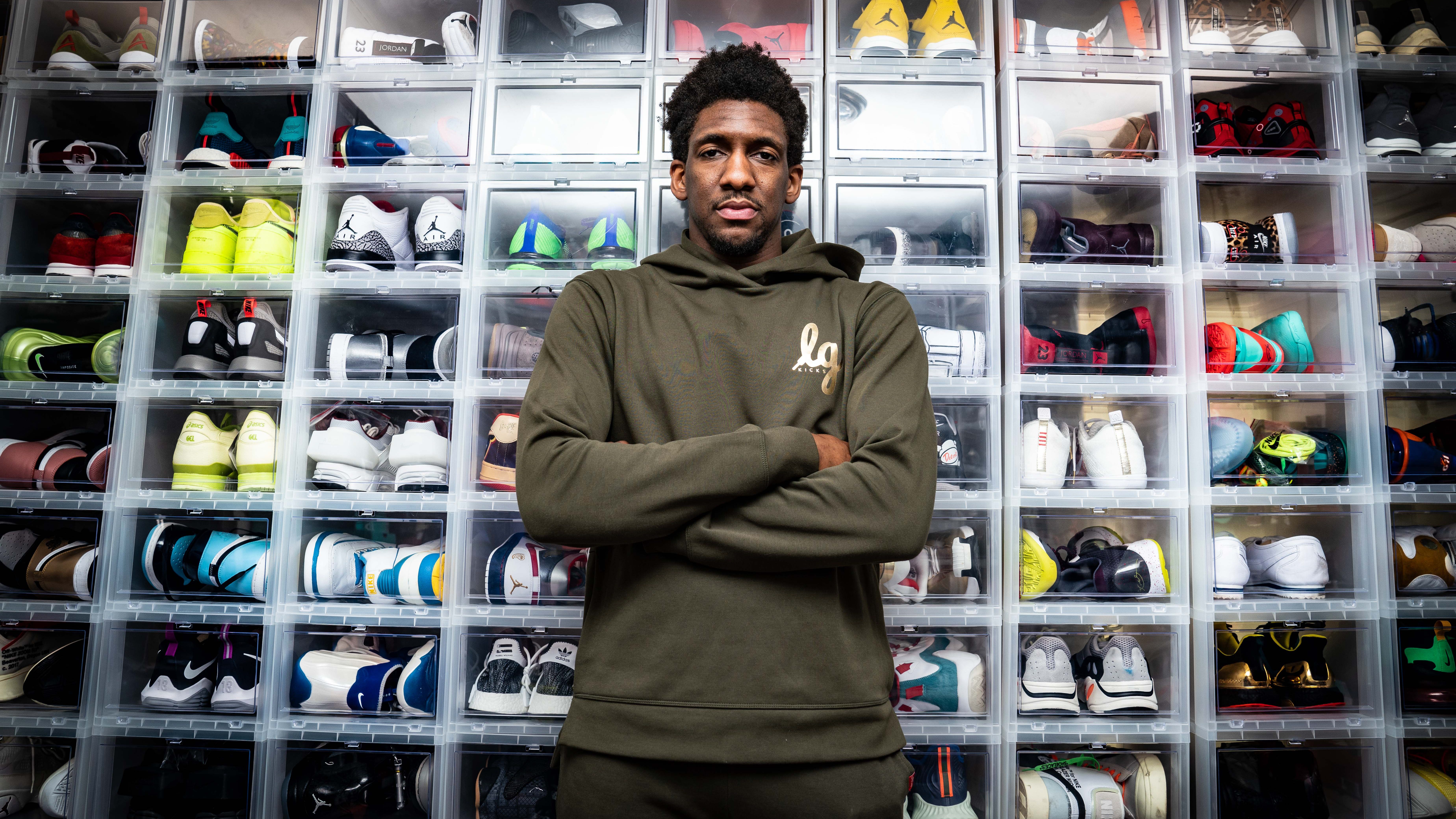 Sabrina Galloway, 30, has a nice collection of kicks to complement her suits. She was OK with Galloway’s dissections as long as the mess was contained to a specific corner of the house.

“He’ll be the first person to tell you that I was not gung-ho about, ‘Oh, I’m going to start my own sneaker line,’ ” she said. Sabrina Galloway, who has an MBA from Tulane University, needed to see a product. Plus, there were other parts of Galloway’s business to consider, including running his foundation. Mostly, she stood back as he built his vision of a perfect shoe. After nearly two years, Galloway, who worked with designer Brett Golliff, had a prototype.

“Lang had a true opinion as to what the shoe should become,” Golliff said via email. “It’s very easy to point out what you like in other shoes or what you don’t like as well as to say what ‘comfortable’ is to you. But those are all subjective. Lang had and still has a specific view as to what Ethics is and most importantly what a performance basketball shoe is. That made the creation process flow because you knew what the goals were and feedback was more direct as we went through the process.”

Sabrina Galloway was convinced. “OK. We have a viable product. Now, what do we need to do to take this product to market from a marketing standpoint, supply chain standpoint. How does that look?” 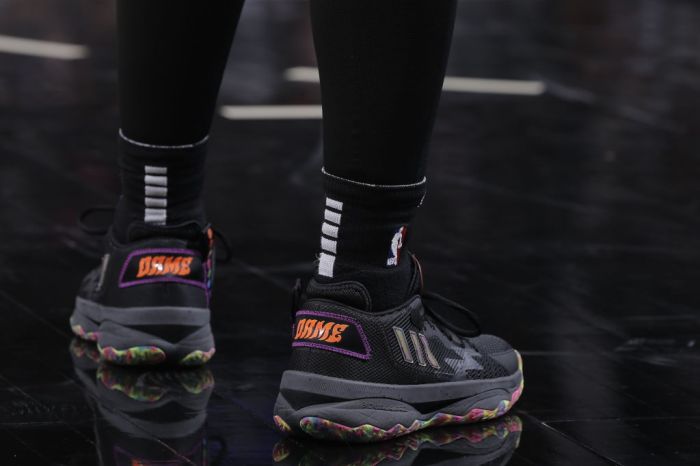 As the initial marketing plan unfurled and the shoe’s release date was pushed back to late January, she wanted to presell the lgONE to capitalize on the Phoenix Suns, Galloway’s team at the time, being in the 2021 NBA Finals. Galloway refused. He had seen other brands burned by preorders and “wasn’t sure about shipping while COVID was delaying everything.”

“He was just very adamant about not preselling and wanting to make sure that that reason we are direct-to-consumer is because we want to know our customer,” she said.

The sneaker industry, Galloway said, is similar to playing basketball. “You’re never going to be perfect,” he said. “You’re learning, growing, trying to get better.” In basketball, getting ready for FIBA World Cup 2023 qualifiers as part of USA Basketball is his top priority. Ethics is right behind. He wants to continue to find ways to expand on “ethically made,” beyond hand-cut and sewn with animal-free materials and the use of recyclable material for packaging and shipping. “We want to be something that people can relate to and say, ‘Oh, man, they’re doing it the right way. They’re not trying to cut corners.’ ”

And he wants the output to be personal.

“People can relate to me,” he said. “I’m not a 6-foot-7-inch, 6-foot-8-inch wing that can do everything on the court. I’m aa 6-foot-1-inch, 6-foot-2-inch guard that plays hard defensively, offensively — knocks down shots, and makes plays for guys.” He made the NBA the hard way. Undrafted out of Saint Joseph’s University in Philadelphia, Galloway began his NBA career in 2014 and signed a three-year, $21 million deal with the Detroit Pistons in 2017. That grind is relatable, a hook Galloway hopes will help attract customers to Ethics. After all, who doesn’t like an underdog?

As Ethics grows, Sabrina Galloway isn’t concerned about her husband’s gritty storyline losing luster. “No matter where you are in your journey, underdog to top dog, you have to work hard to stay there,” she said. 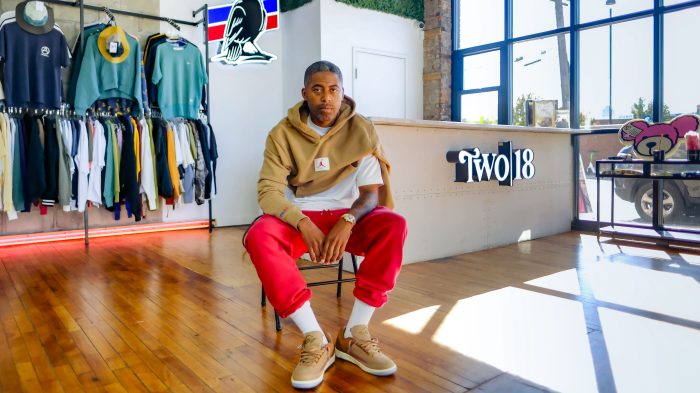 “We are always compared to the larger brands, which is inevitable,” Golliff said. “But on the flip side, it also points out the lack of education the consumer has that I believe is intentional by the larger brands. They are trained to accept what those brands give them because they don’t know what else is out there. On the real, the lgONE would be $185-plus at a larger brand. We couldn’t, and don’t have a desire to enter the market at that price point.”

“We can grow in value but we don’t always have to grow in size,” Sabrina Galloway said. Staying small means more control. It means Galloway can launch a shoe with a color scheme inspired by their son Deuce’s love of superheroes without having to appease shareholders. It means not following trends of the more prominent companies, freeing them to make products he, his wife, and Golliff admire that “has a huge story to it, that doesn’t just stand for what everybody else is doing.”

“You take on your own story when you put on the Ethics,” Galloway said. If you want a representation of “your ethics, your moral compass,” there will soon be a size available for your life.

That means keeping the shoes affordable — “We’re charging $120 because we’re just getting started,” Galloway said — and expanding the sizes to include women and kids. Of course, Galloway and Sabrina Galloway want the company to grow. “I want this to be a billion-dollar business,” Galloway said. Part of that business would include an Ethics factory in the United States.

Ethics has refined Sabrina Galloway’s expectations. Building a brand and its community, making sure the former is relevant, can’t be charted on a spreadsheet. “That’s the part Lang helps me realize because I’m a very measurable person,” she said. She’ll want to know the direct effect of a pop-up store, and Galloway will readjust her expectations. “Sometimes the cost doesn’t matter,” she said. “The reward will be much greater and it doesn’t have an amount associated [with it].” 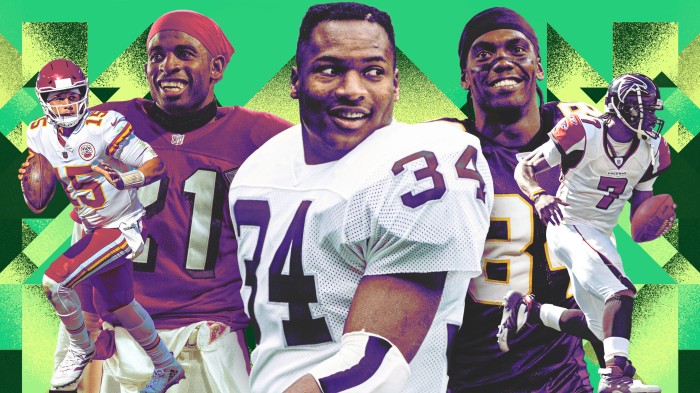 The complete history of signature shoes in the NFLRead now

A company with a personal approach means Galloway shares the spotlight. “Before I went back to business school, I worked in politics, so I’ve always been behind the scenes,” Sabrina Galloway said. “I’m just like a worker bee, that’s my thing.” As Ethics’ co-founder, people want to see the process behind what they wear, and she’s part of it.

Sabrina Galloway is getting used to the attention, but she knows Ethics is a part of Galloway’s life after basketball, which includes tech investments, startups, and philanthropic endeavors. It’s another avenue for Galloway to pursue once his playing days come to an end.

“I’m enjoying the process of finding out how we can continue to grow and learn from these other businesses that me and Sabrina have going on outside of basketball,” he said.

It’s not only about basketball. And it’s not about shoes.

Pete Croatto is the author of From Hang Time to Prime Time: Business, Entertainment, and the Birth of the Modern-day NBA. His writing has also appeared in SLAM, The New York Times, Grantland, Victory Journal, and GQ.com.