Richie, a former college basketball player at UCLA and Clemson, decided to let the Pac-12 Conference know that at its tournament in early March.

The Pac-12 currently does not have a Black head men’s basketball coach in its conference, so Richie, along with two other coaches from Sacramento, California, decided to head to Las Vegas and peacefully shed light on the inequity.

They traveled to Vegas, checked into hotels on the Vegas strip for the duration of the tournament and arrived at the T-Mobile Arena early in order to peacefully greet the coaches and players – many of whom Richie knows – as they reached the arena. They held up picket signs in support of Black coaches being given opportunities.

Richie said he even attempted to check in with arena security beforehand to alert them of his peaceful intentions and to be directed to the proper place to protest. However, the security personnel at T-Mobile Arena were not so accommodating. Richie was told to leave and was escorted back to his hotel room to discard his picket signs before being let back into the arena. 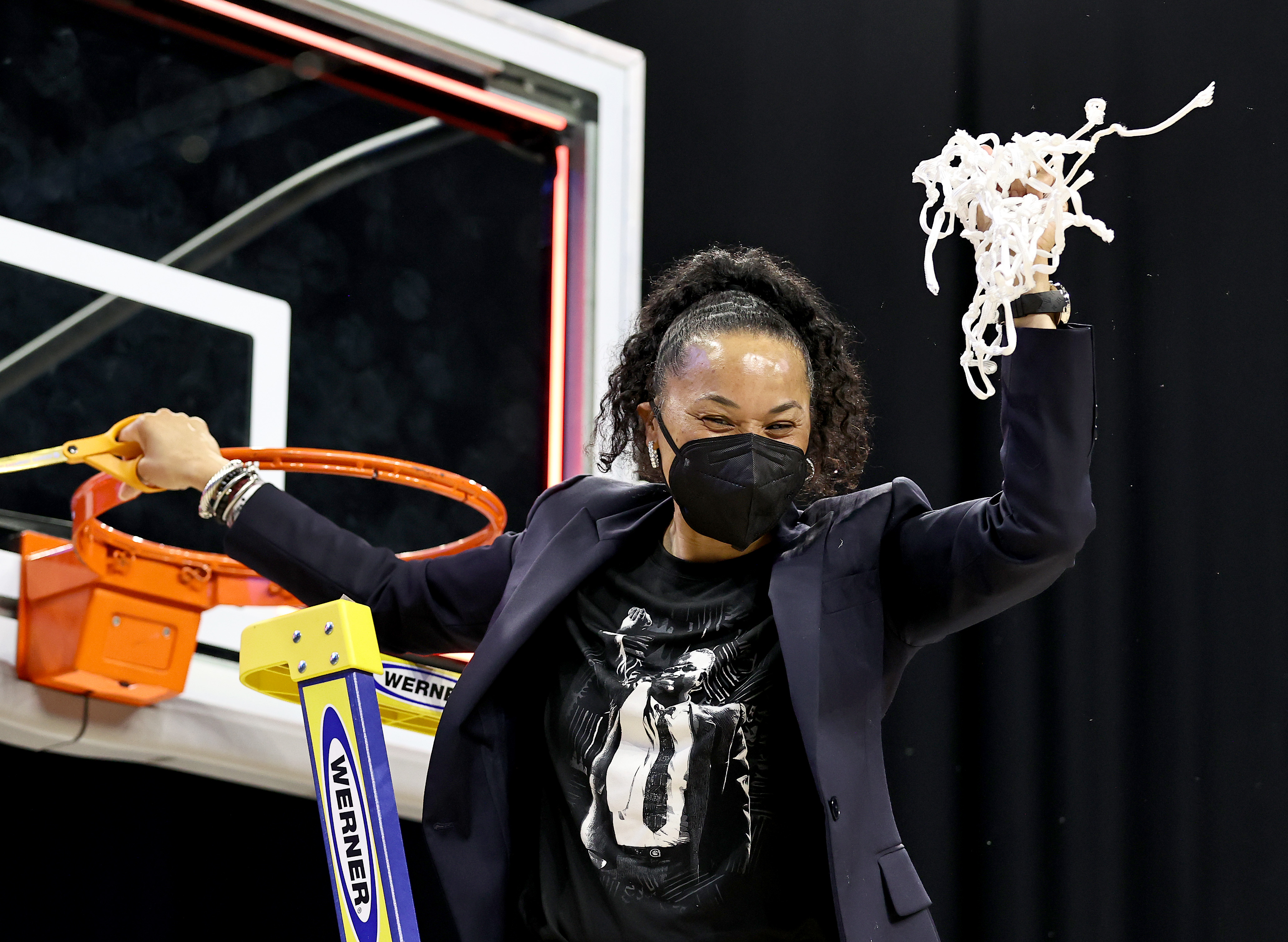 “ ‘Look, man, I’m not trying to go to jail, I’m not trying to get shot,’ ” Richie said he told arena security. “ ‘I’d like to peacefully protest for two minutes while the team walks by, then I’ll be on my way. I’m only going to say positive things to the players and the coaching staff.’

“It was presented to me,” Richie continued, “ ‘Look, you need to leave right now and never bring the picket sign back or we’re going to evict you and cite you for trespassing.’ ”

Richie decided to take the guards’ advice and live to fight another day.

That day is now. Richie has decided to continue his protest this weekend at the women’s Final Four in San Antonio. This time, he exchanged the picket signs for T-shirts, hoping to avoid any further confrontation with security.

“I put down the picket sign and I put on T-shirts,” Richie told me. “The T-shirts say ‘Black Head Coaches Matter.’ Now I can walk in and people can still see it and people can still think about it. I can still tweet it and I don’t have to worry about a police officer putting his hands on me or pulling his gun on me, because it’s a peaceful protest, but it’s a shirt and it’s nonthreatening, so there’s no way someone could ask me to leave with my shirt on.”

Why is Richie doing this?

“The reason I started this, it goes back to George Floyd,” he said, referring to the killing of Floyd while in custody of the Minneapolis police last year and the resulting social unrest that followed. He said he was inspired to get involved in social initiatives, such as voter registration, and that led him to focus on his own profession.

“In the Pac-12, right now there is zero percent head coaches of color, 42% of the assistant coaches are coaches of color, but 63.8% of the players are players of color … People have to take stances and it makes people uncomfortable, but in the end, that’s how you’re going to evoke change, asking people to think differently and think outside of the box,” Richie continued.

“The biggest misnomer is … I want to be clear, I’m not saying [white] coaches are not good, that they’re not deserving, that they should be fired or that they should not be hired. I want to be clear on that because that’s the easy way to misconstrue what I’m saying. I’m not saying that at all. I’m saying across the country, Pac-12 as well, the hiring process needs to be more equitable and transparent.”

Another new and formidable organization Richie has been working with to address issues of inequality in sports is ABIS (Advancement of Blacks in Sports). ABIS was formed in September 2020 by New York City grassroots basketball legend Gary Charles. Like Richie, he was inspired in the aftermath of Floyd’s killing.

“When I was watching the George Floyd video, I literally thought that I was watching a live lynching,” Charles told me this week. “And I realized that a lot of us many times get upset and we do a lot of talking, but it’s time to stop talking and walk the walk. It did something to my soul. If it didn’t do something to you, then you just aren’t human. So, I felt that I needed to reach out to coaches and get us together and make some changes.”

In short order, membership was expanded beyond basketball into all sports, including baseball, led by former MLB player and manager Bo Porter, who is now MLB director of coaching development. Now, ABIS membership includes influential people of all walks of life: sports figures, coaches, college administrators, professors, lawyers and the like. Civil rights attorney Ben Crump, human rights activist and writer Richard Lapchick hip-hop legend Chuck D and seven-time NBA All-Star Tracy McGrady are among those who have attached their names and efforts to the organization.

“We’re asking for justice, we’re asking for fairness,” Charles said when asked about ABIS’ purpose. “ABIS wants to be the voice for racial equity in sports. We’re not asking to take over. We’re just saying that we deserve to have a seat at the table also.”

For a new organization, ABIS has had its hand in social justice issues, both in and out of sports. It was very active in get-out-the-vote campaigns for the 2020 presidential election and the 2021 Georgia runoff elections. ABIS has worked behind the scenes to promote the incorporation of name, image and likeness rights for college student-athletes and has been a united voice when unexpected social issues have arisen, such as calling for the dismissal of Creighton head coach Greg McDermott after he said, “I can’t have anybody leave the plantation” while addressing his team. ABIS, along with former East Tennessee State head coach Travis Williams, also helped create a historically Black college all-star game that will be played during Final Four weekend starting next year.

Still, ABIS has been most active in its advocacy and promotion of Black coaches in college basketball. 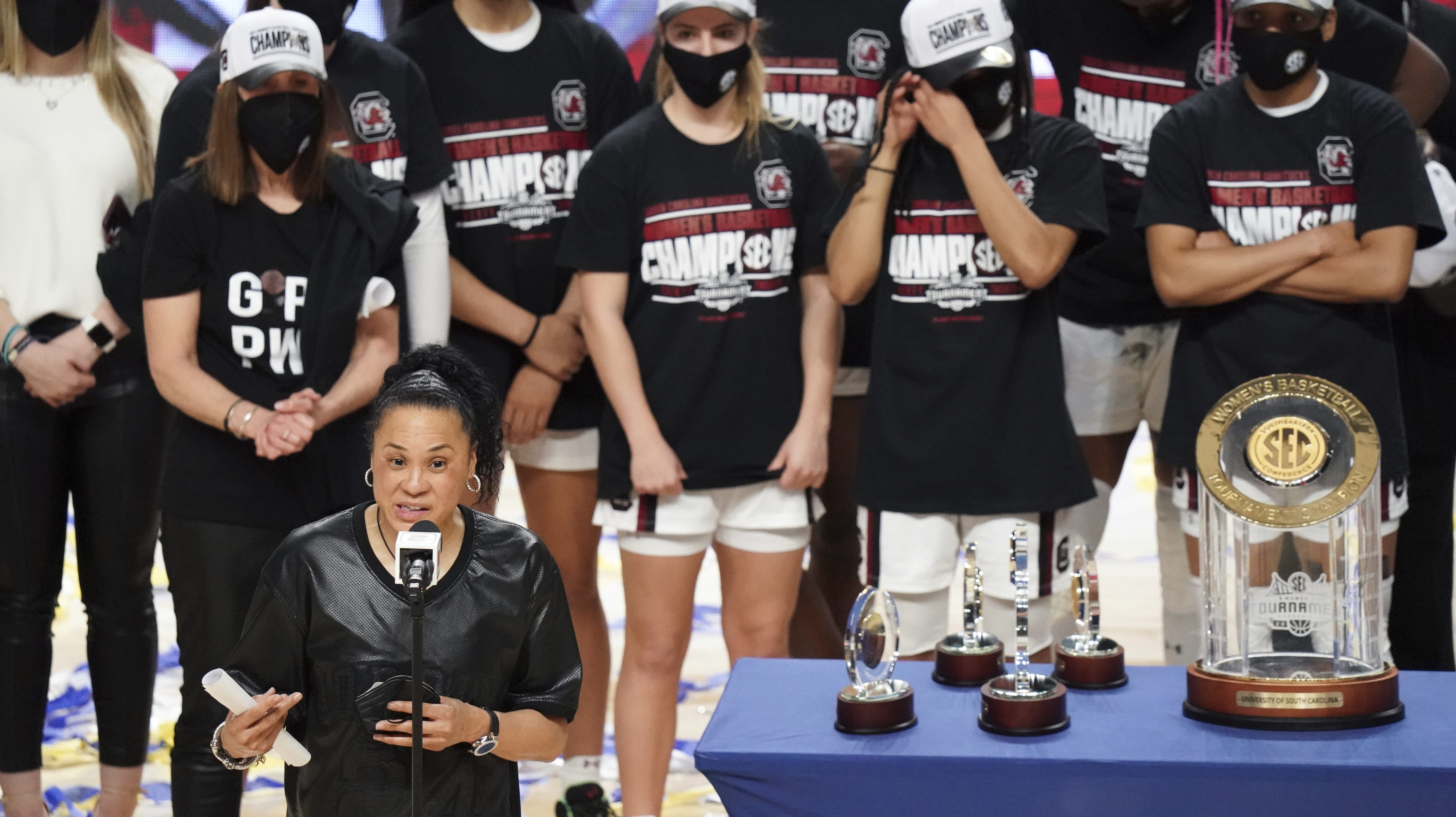 “We have to be unapologetic about creating an opportunity for [talent] and elevating our own,” said Felicia Hall Allen, ABIS vice chair of programs marketing and outreach and president and CEO of FHA Associates, a motivational speaking and sports management company. She has represented multiple women’s college basketball coaches and Staley recently credited Allen for helping turn South Carolina’s season around after speaking to the team. Staley’s Gamecocks will play in Friday’s Final Four.

“That’s why [ABIS] created the ‘Watch List,’ because we wanted to do away with the myth that we don’t exist, that we’re not out there. So we said, ‘Hey, we got a cheat sheet, here are our superheroes,’ ” Allen said.

ABIS created a “Watch List,” a list of the top mid-major Black men’s and women’s head coaches and a list of the top Black men’s and women’s NCAA Division I assistant coaches and provided the lists to athletic directors and executive search firms. This, of course, will help eliminate the excuse that many athletic directors and search firms are not aware of the pool of qualified Black candidates or that such a pool does not exist.

“It’s one thing to boldly advocate and another just to talk,” Allen said. “And that’s what Dr. Lapchick said: ‘I’ve been putting out these [The Institute for Diversity and Ethics in Sport] reports every year, but the progress [in terms of the percentage of Black coaches who are given head-coaching opportunities] has been at a glacial pace.’ ABIS is in place because we want to see results. Dr. Lapchick has been measuring it for a long time, but now we’re starting to see some results.”

In the current climate, there is optimism that progress within the head-coaching profession will continue.

Lori Martin is a professor in the African and African American Studies program and the Department of Sociology at Louisiana State University. She also heads the racial equity research group and is chair of the name, image and likeness group for ABIS.

“In American society, race matters and gender matters. So, that means that you oftentimes have predominantly white men in power and they are hiring people who look like them or who are in their social networks. So, you keep creating this system of exclusion. And then you have a period like following the killing of George Floyd, where some people who never had to think about race are suddenly thinking about race. And so they start thinking differently about what their athletic departments look like and they may be getting pressure from various groups to try to look more like the players or more like the broader community. So, then they start reaching out to people who they wouldn’t traditionally reach out to. So, whereas maybe they would not have reached out to a group like ABIS, which, to be fair, didn’t exist prior to September 2020, now they’re looking to these groups and saying, ‘What can you do, how can you help us? We want to do better.’ ”