When the Los Angeles Lakers trekked north to Portland, Oregon, last weekend, LeBron James was able to take in more than the Saturday night showdown with the Trail Blazers, where he watched his Laker teammates from the sideline as he continues to battle an ongoing abdominal injury.

On Nov. 5, a car service took him 25 minutes west to One Bowerman Drive for a tour of the newest building on Nike’s nearly 400-acre campus: the LeBron James Innovation Center.

“It’s definitely one for the ages,” James proudly said in an email interview.

The four-time MVP had been looking forward to the trip once the season’s calendar was revealed, and he was joined by his mother Gloria, wife Savannah and their three children, along with a group of friends and family from Akron, Ohio.

That’s a far leap from the 70 acres and eight buildings at the start in 1990, which were named after, among others, Michael Jordan, Bo Jackson and Steve Prefontaine.

The “MJ” building now houses the Jordan Brand team, while the “Pre” is a welcoming showcase hall for visitors and athlete pitch meetings. The LeBron Center will be home to Nike’s innovation and research teams, which shape the company’s approach to technology, sport and design.

James becomes the first basketball player since Jordan to receive the namesake distinction.

“I’m definitely honored to be one of the Nike athletes to have a building represent their name,” said James. “The inside of it and the outside of it, the architecture of it, the story behind it, everything that goes on inside this building is unbelievable.”

After signing a seven-year, $90 million deal at 18 years old the day before the 2003 NBA draft lottery, James extended his contract again in 2010, and inked a “lifetime deal” with Nike in 2015. His overall signature business, including shoes, apparel and accessories, is estimated to generate around $600 million annually, according to sources — a basketball industry-best for an active athlete. 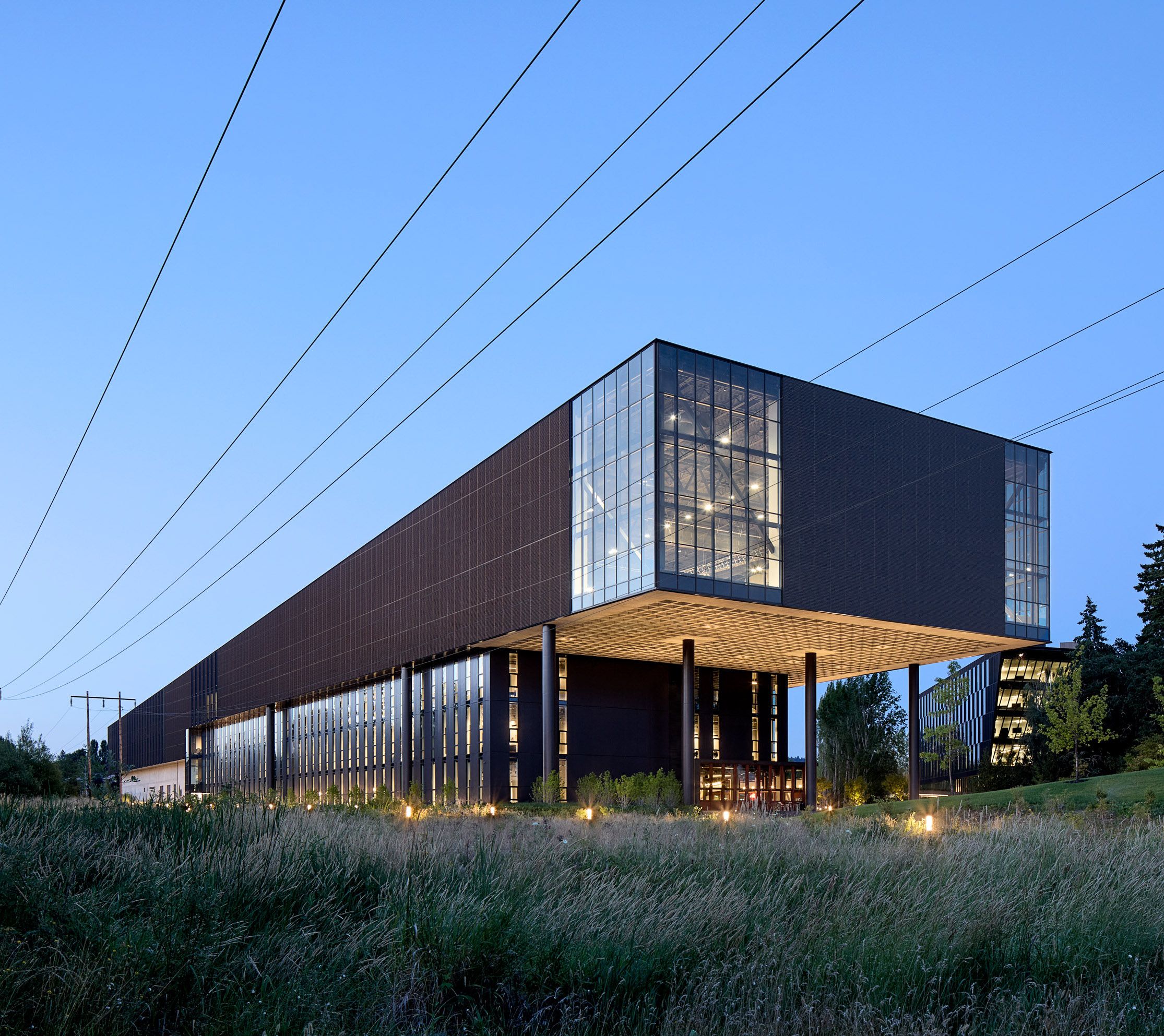 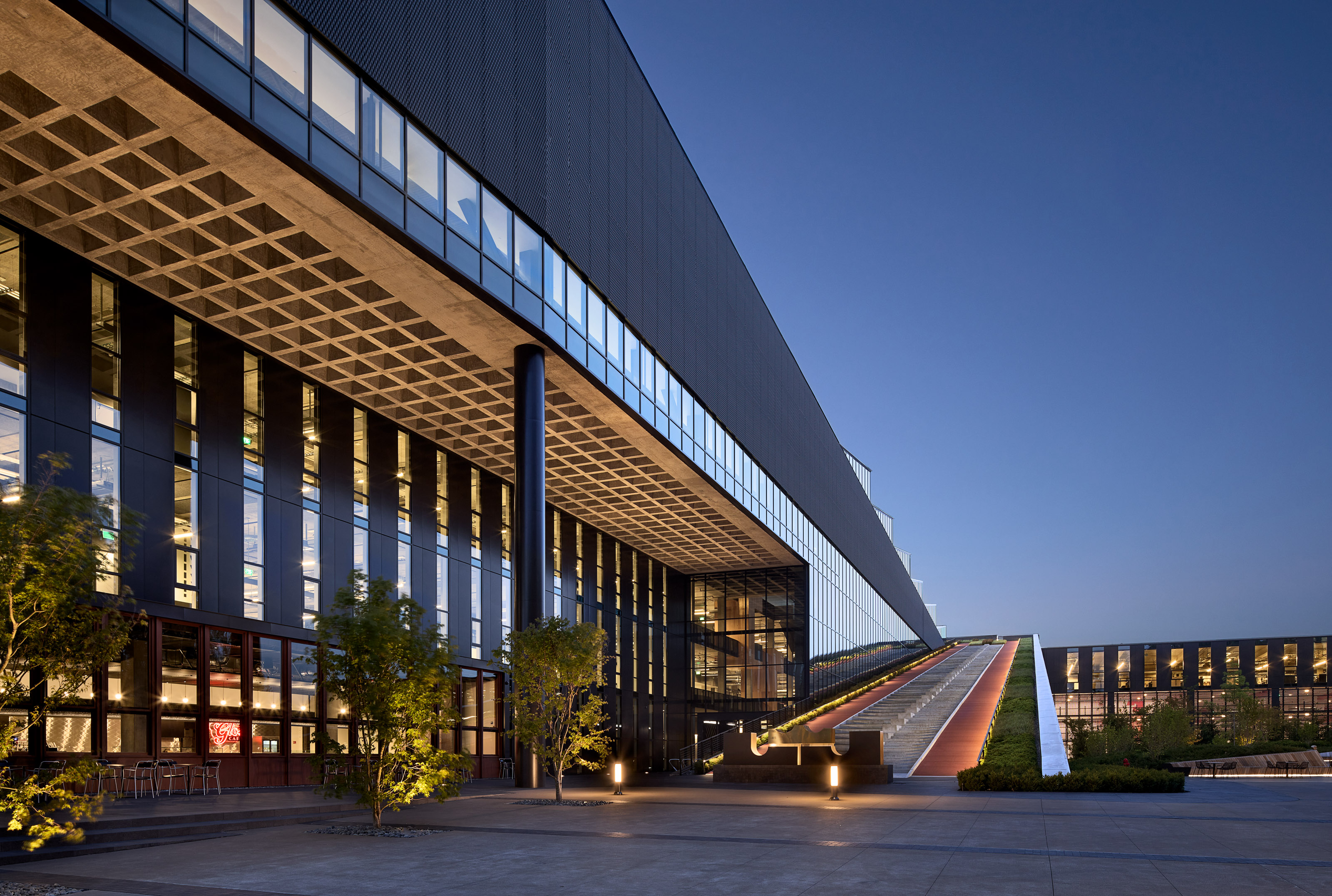 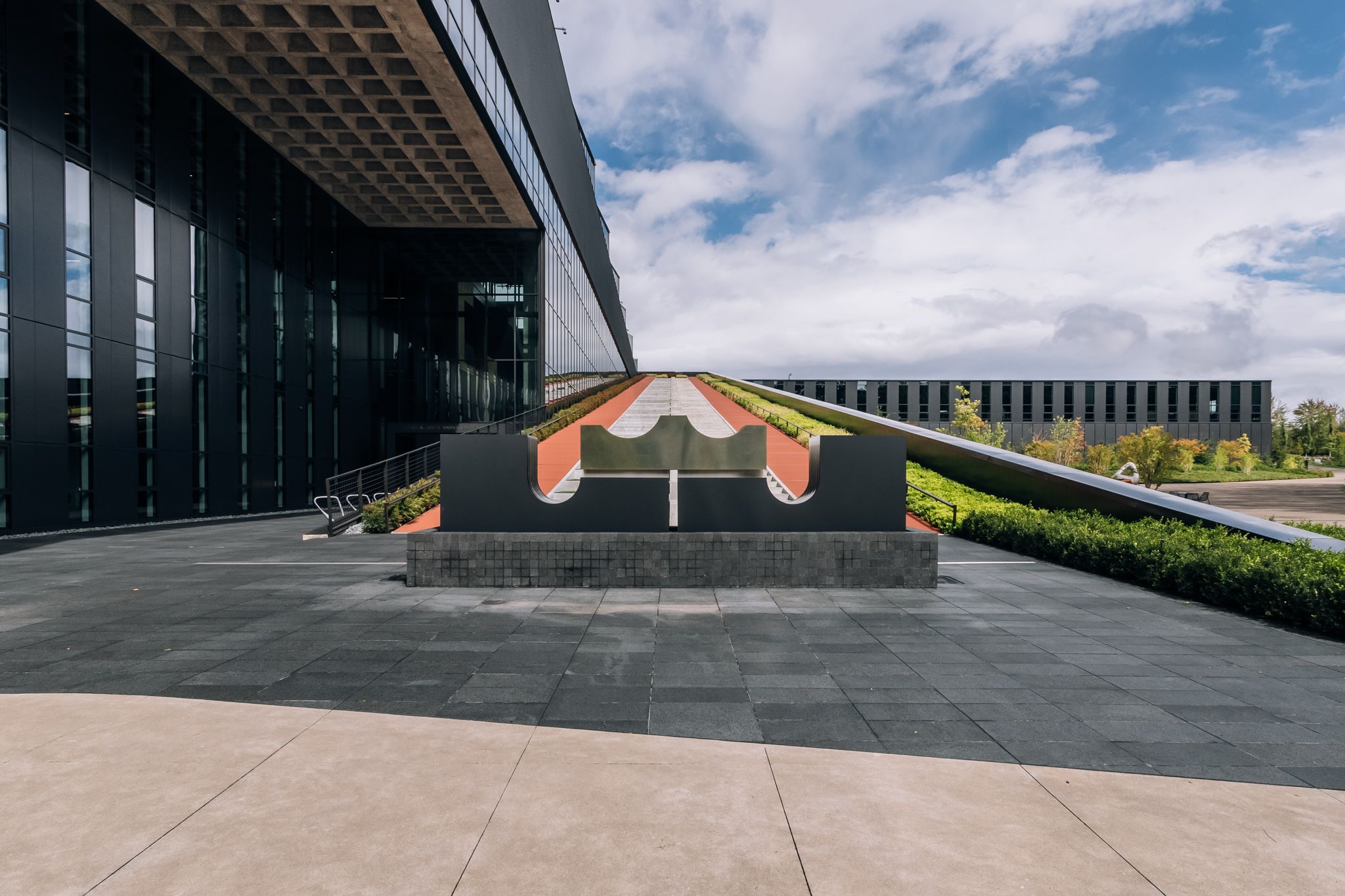 Part of a six-building expansion plan announced in 2016, with original plans calling for an ambitious completion in 2019, the newest building was officially announced as the LeBron James Innovation Center in September. James said he was “literally shedding tears” when he got the call about the planned building years ago.

Designed by Olson Kundig, the cantilevered look features an open-window design throughout. It includes a 500-foot-long, 15% incline hill just outside for athletes to train on. The eight-pane, layered logo at the base of the hill features the names of James’ closest friends and family inscribed along the inner edge of each pane.

“At first, the architecture stood out most,” recalled James. “I was looking up at the building, and it felt like it just kept getting higher, higher and higher.”

Upon entering through the doorway with its golden split “LJ” crown logo, guests take in an expansive entryway, with a basketball hoop-turned-art piece and adjacent cafe. The floor features a series of dots throughout that represent every NBA field goal made by James, who has scored more than 35,000 points over the course of his career.

Dubbed Glo’s Cafe, the first-floor coffee shop and juice bar honors his mother Gloria. A stained glass and painted mural of the Akron-born icon and his mother spans an entire wall, showing her embracing a teenage James clad in his St. Vincent-St. Mary uniform.

“My mom means everything to my journey, everything to my life,” said James. “Everything that she sacrificed for me throughout my life, especially when I was a kid, her dedication to just trying to be excellent, even through adversity, she set me up to be who I am today. Just being able to overcome shortcomings, overcome anything in my life, seeing the things that she had to go through. To see my mom represented in this building, it’s a special thing for me.” 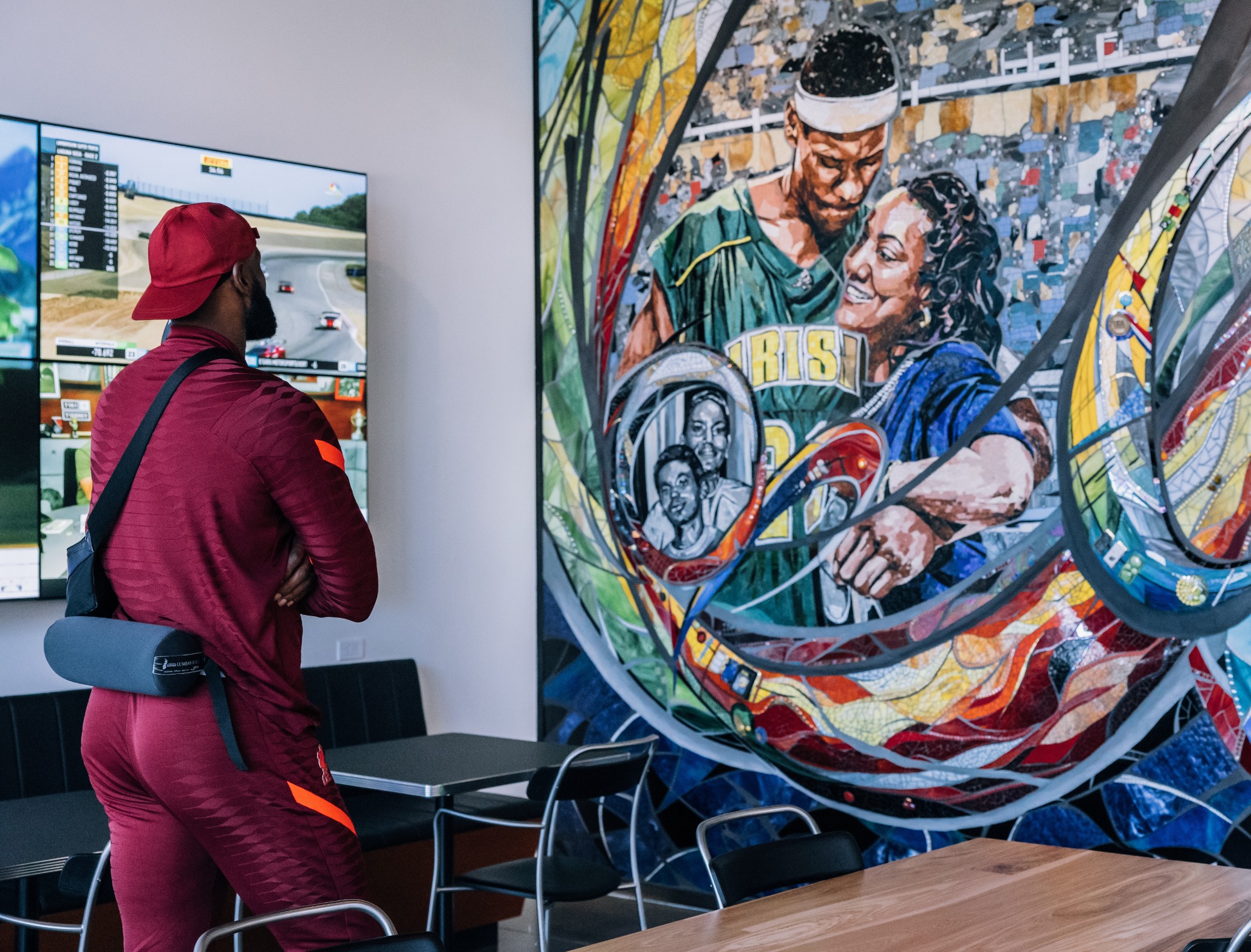 LeBron James observing the artwork of him embracing his mother, Gloria. 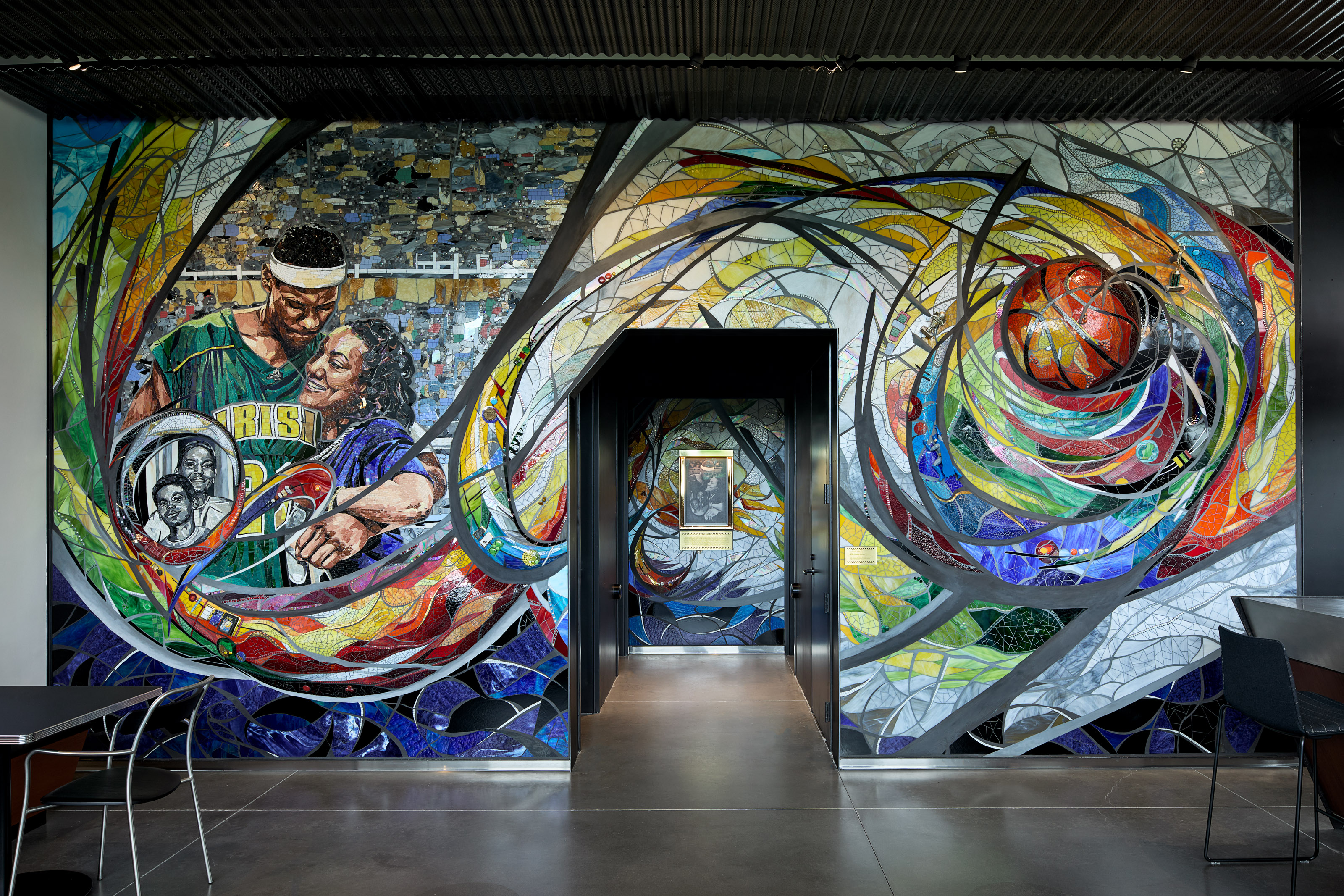 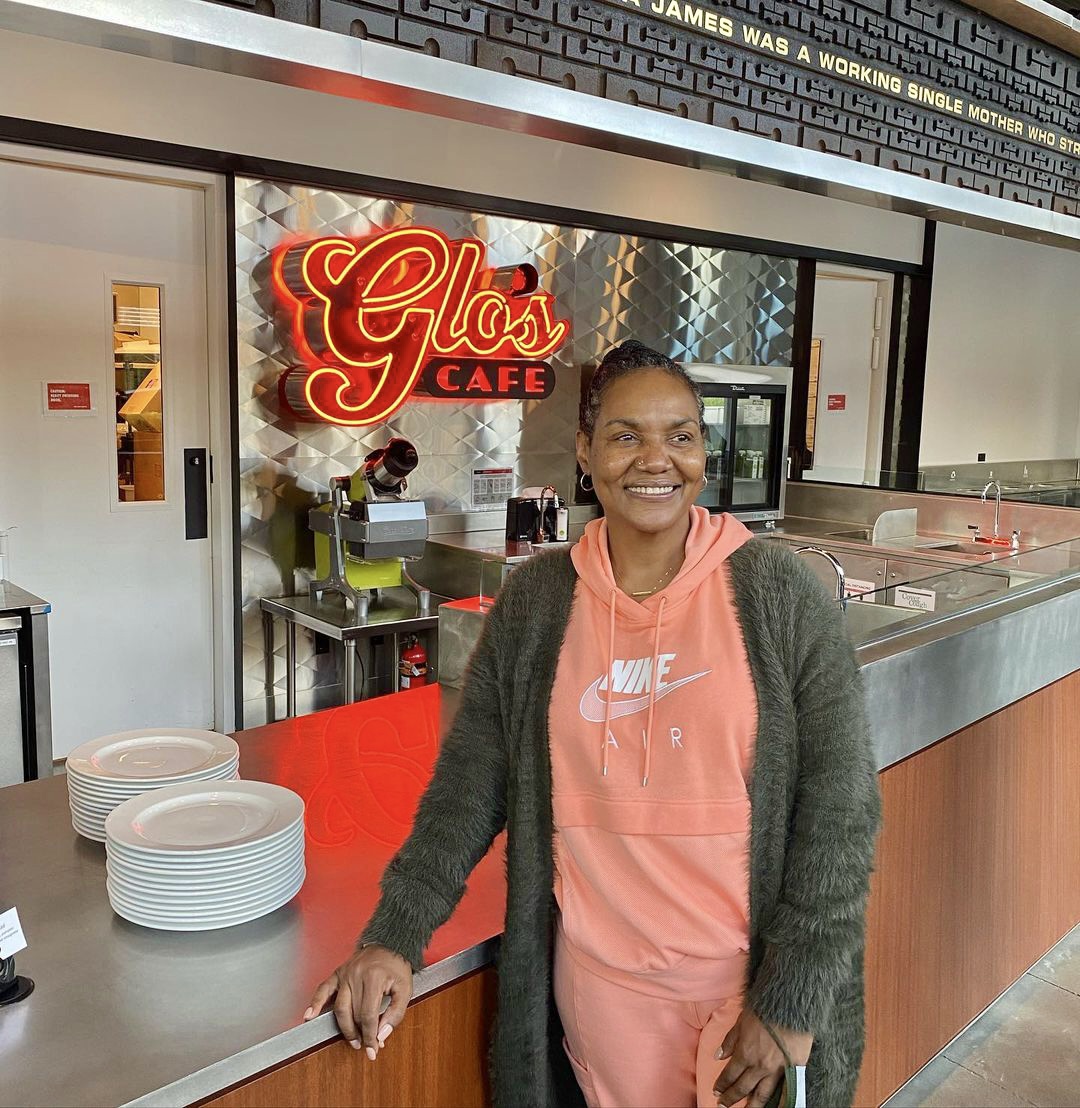 Gloria James hanging out in a coffee shop and cafe named in her honor. 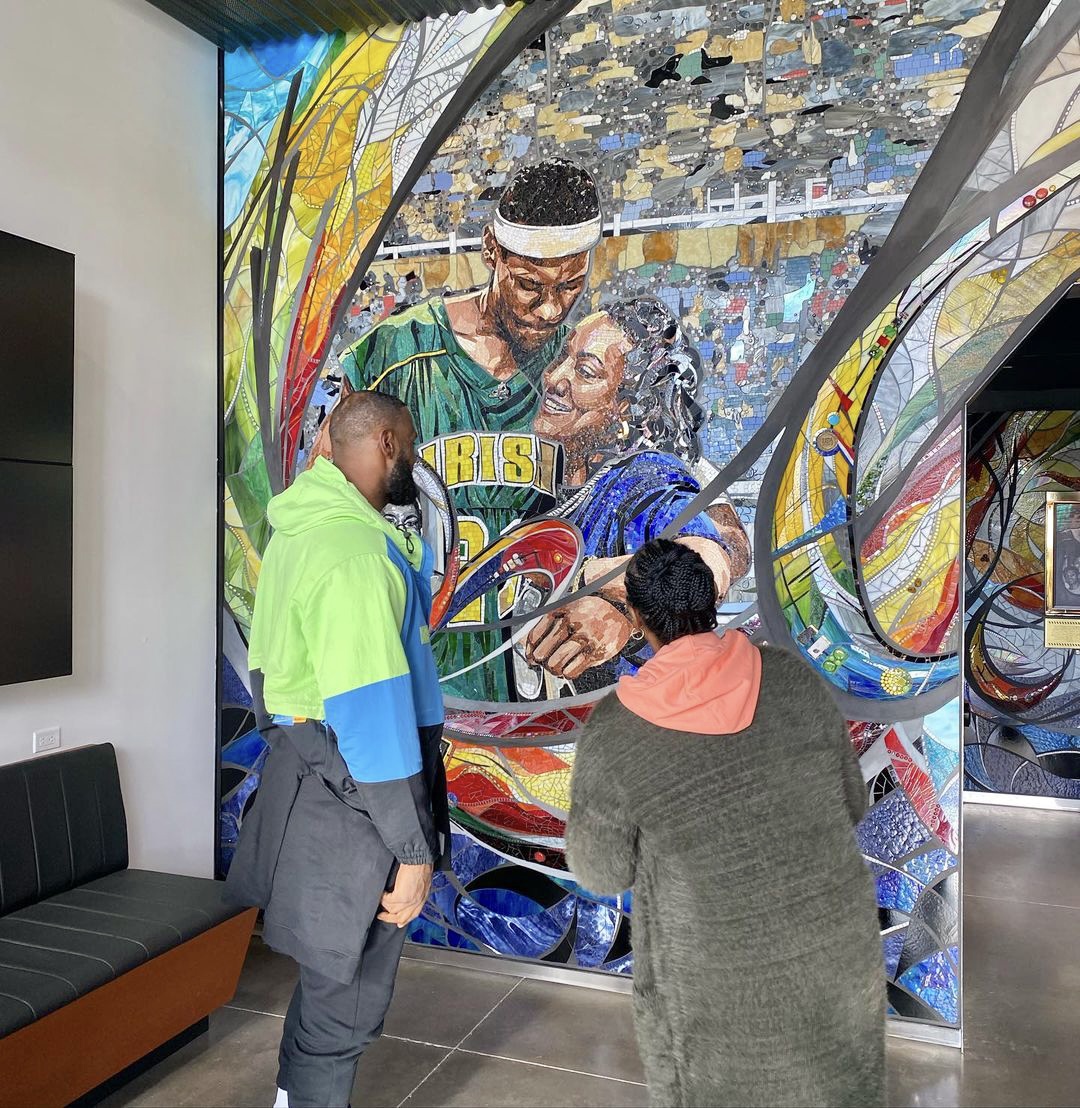 LeBron James and his mother, Gloria, observing the artwork together.

While a team of brand executives is also based on the ground floor, it’s the upper floors where the space begins to highlight the technology and innovation that Nike hopes can continue to provide a competitive advantage.

“What makes this place incredibly unique, which I have yet to see anywhere else on the planet, is we have science and art beside each other,” said Matthew Nurse, vice president of the Nike Explore Team Sport Research Lab. “I would put the team here in the lab up against any other team on the planet.”

Longtime Nike designers Tinker Hatfield and Eric Avar often described their approach to creating footwear as “the blend of art and science,” a mission the brand is looking to continue as it houses employees from both backgrounds.

Digital innovation and smart system teams work on the second floor, and the third floor houses the footwear and apparel innovation teams and their concept creation center. More than 80 machines used for prototyping, lasting and heat-fusing equipment allow designers and developers to create fully functioning sneaker samples on the spot that athletes can then take to the fourth floor.

Now dubbed the new Nike Sport Research Lab, the top floor of the LeBron Center incorporates an expansive maze of regulation sports courts, running tracks and playing fields. The collective of 75 science, movement and physiology specialists based on the top floor boasts a combined 25 doctorates and 40 master’s degrees. 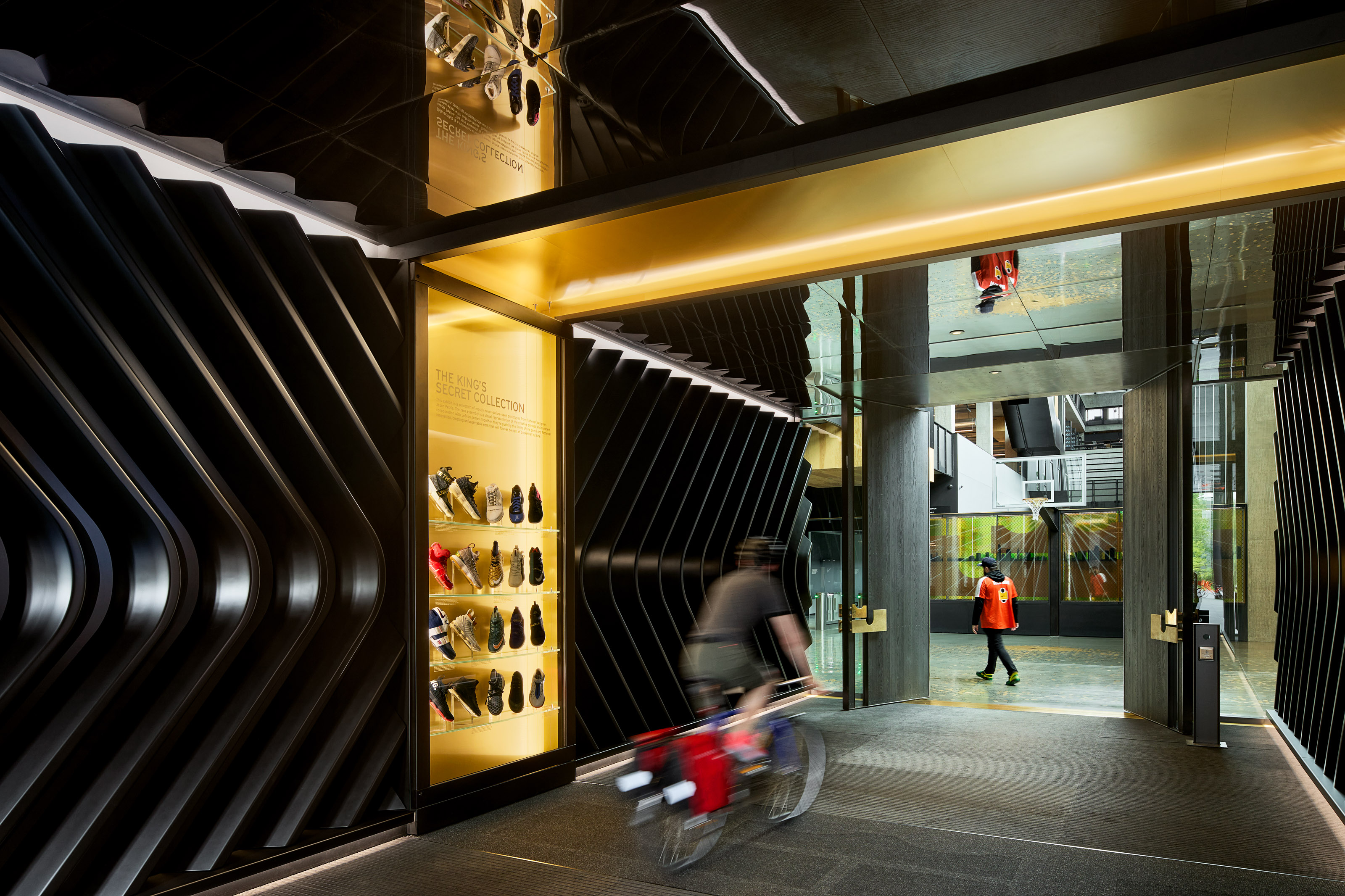 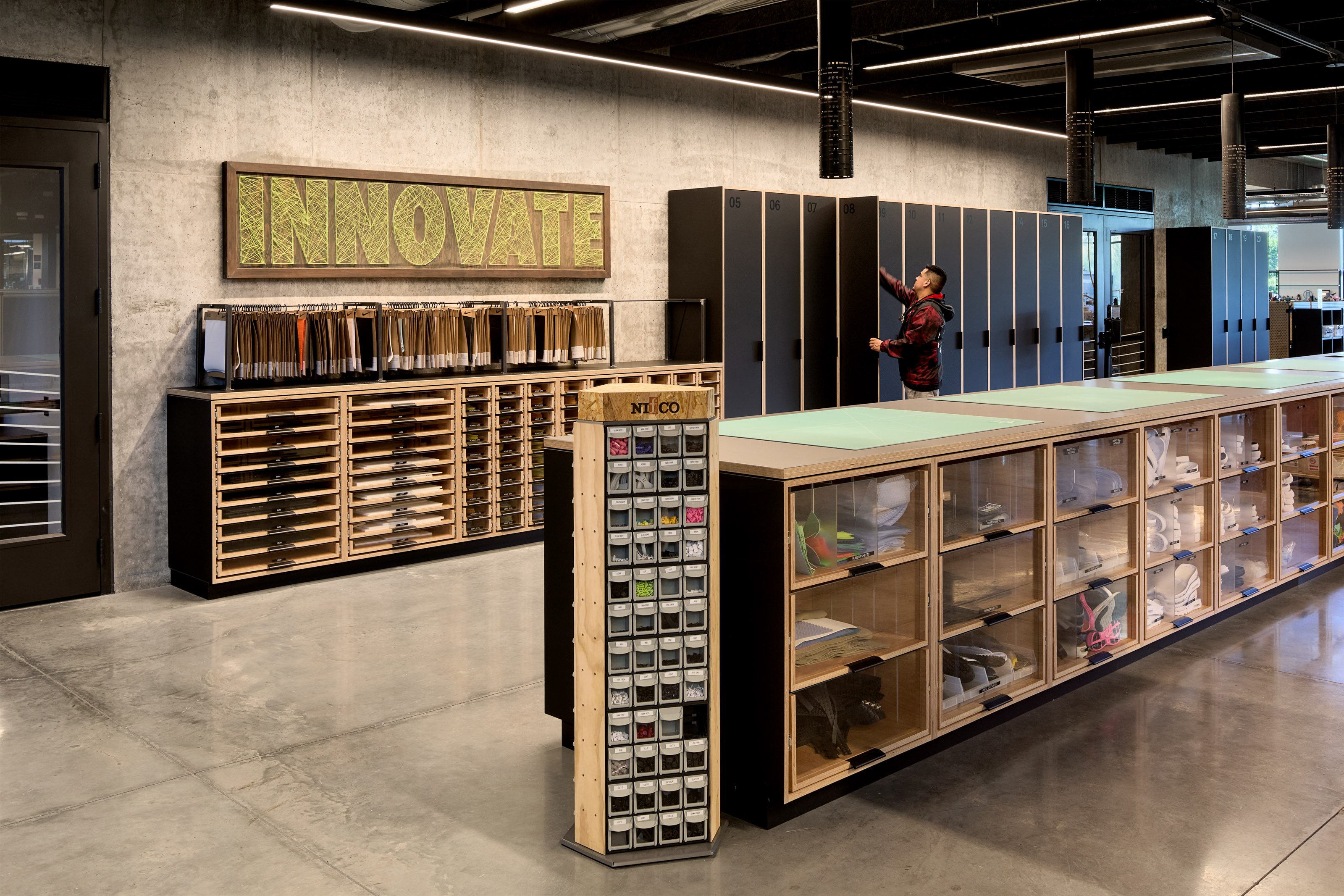 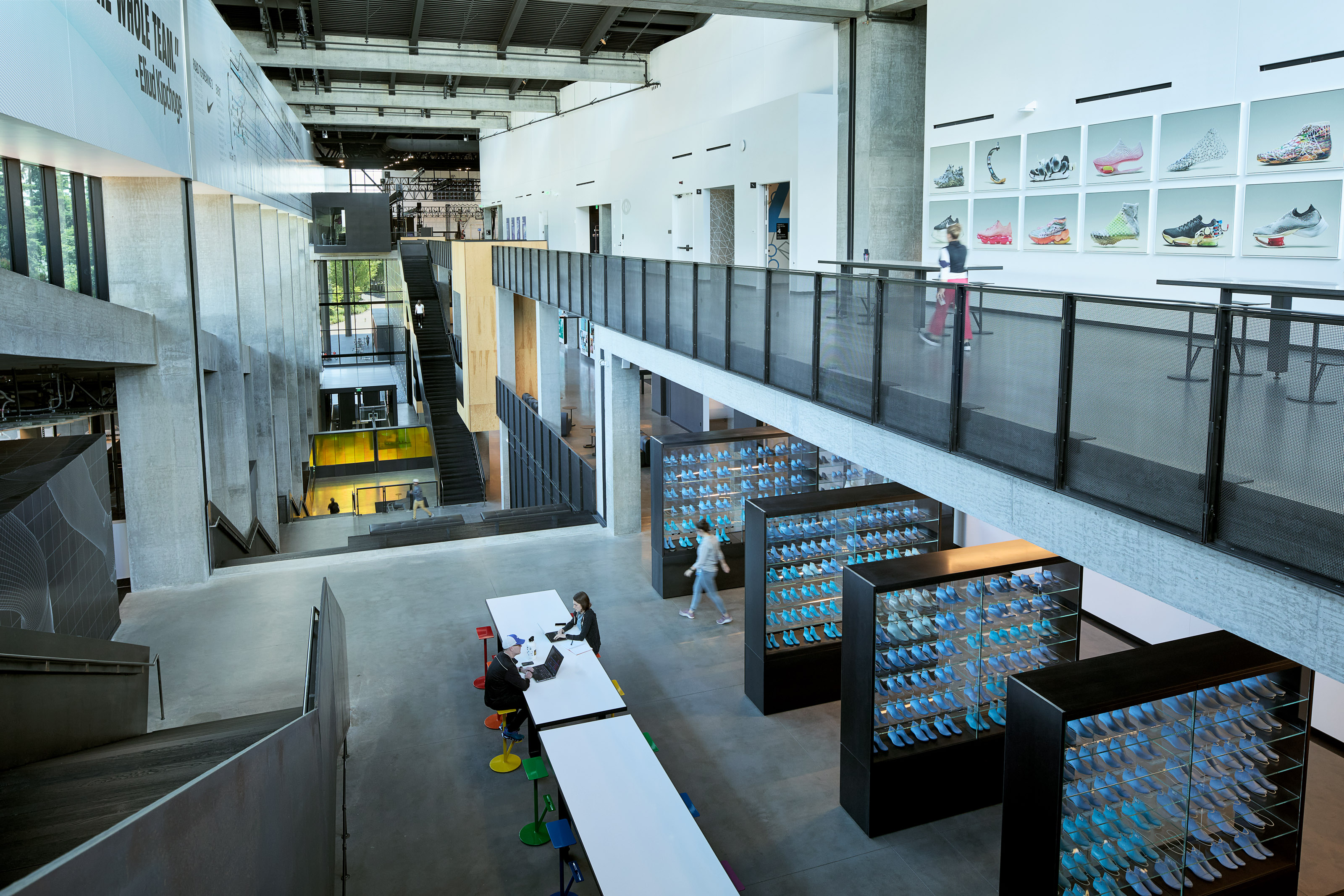 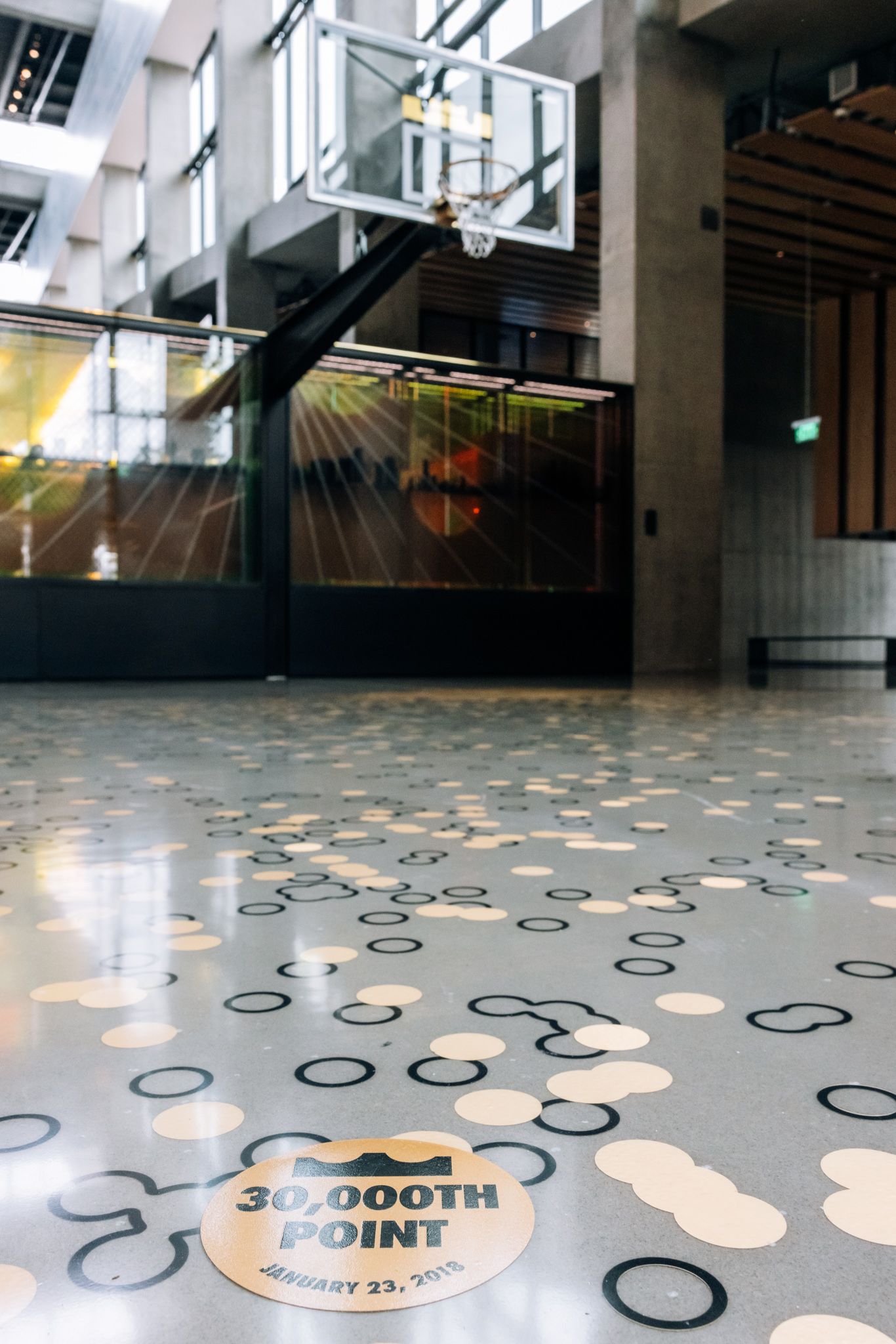 The interior design includes a full-size, 94-foot NBA court surrounded by a 200-meter running loop with a 100-meter sprint lane and a concrete lane to simulate urban running. A regulation turf soccer field lies across the other half of the floor, where global futbol endorsers and NFL athletes alike can participate in practices, workouts and training.

In the past, Nike would take athletes through smaller hardwood or turf rooms, where a series of motion capture cameras could track their movements doing simple isolation moves, shooting exercises or explosive moves within a limited amount of space.

“We’ve gone from small square footage and enough to do some jumps and landings and small two-step cuts,” said Nurse. “But you couldn’t play basketball. It was very much choreographed … this takes it to another level.”

The basketball court, featuring James’ LJ crown logo and dramatic baseline posters in his Lakers No. 23 jersey, now includes a series of force plates and a 360-degree web of synced motion capture cameras. The court’s stable of cameras positioned above each of the game lines is part of an ecosystem of more than 400 motion capture cameras and 97 floor plates that sync together.

“We want to understand people more in a game state,” said Nurse. “We weren’t able to do that in our previous spaces. Everything that happens here, there’s data streaming off of you.”

Nearby monitors instantly provide a comprehensive overview on everything from player placement, speed, force and acceleration to the trajectory, arc and eventual rim positioning of a shot once a player takes a jumper. 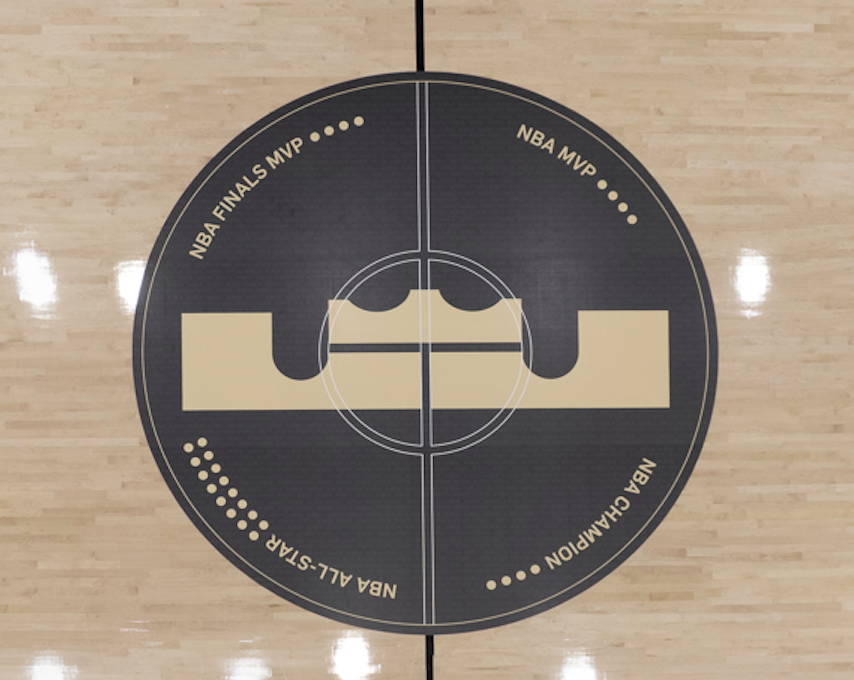 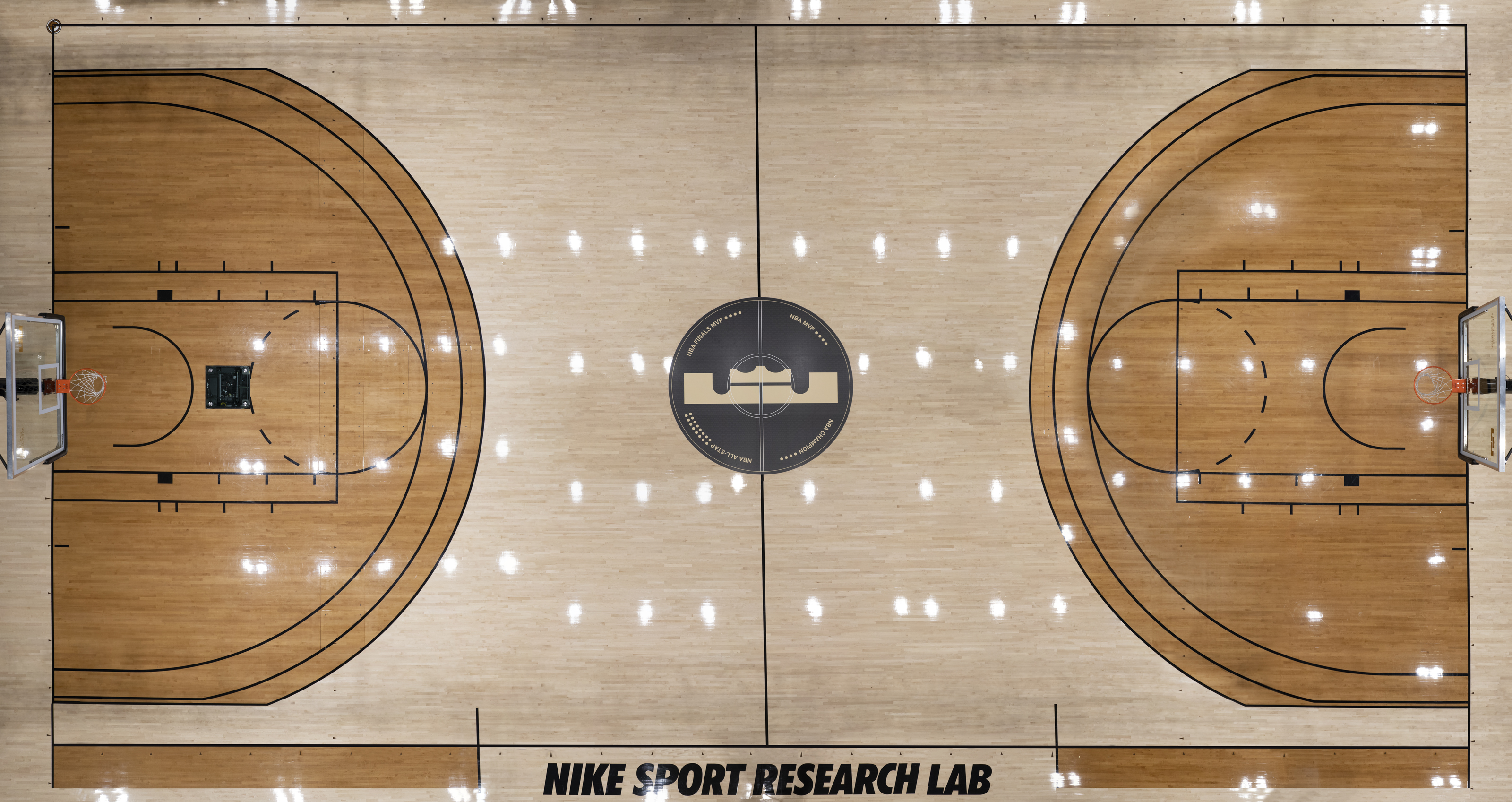 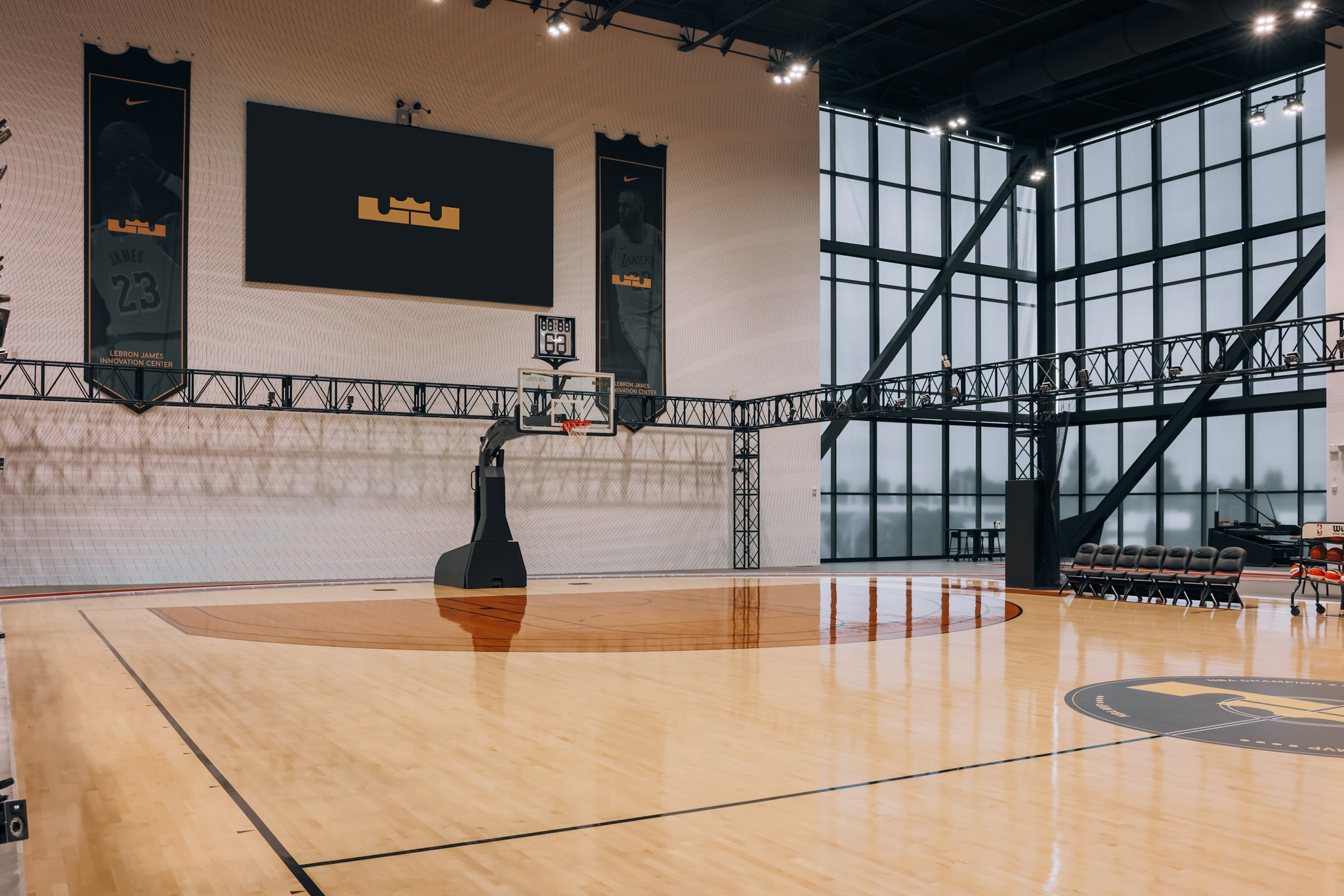 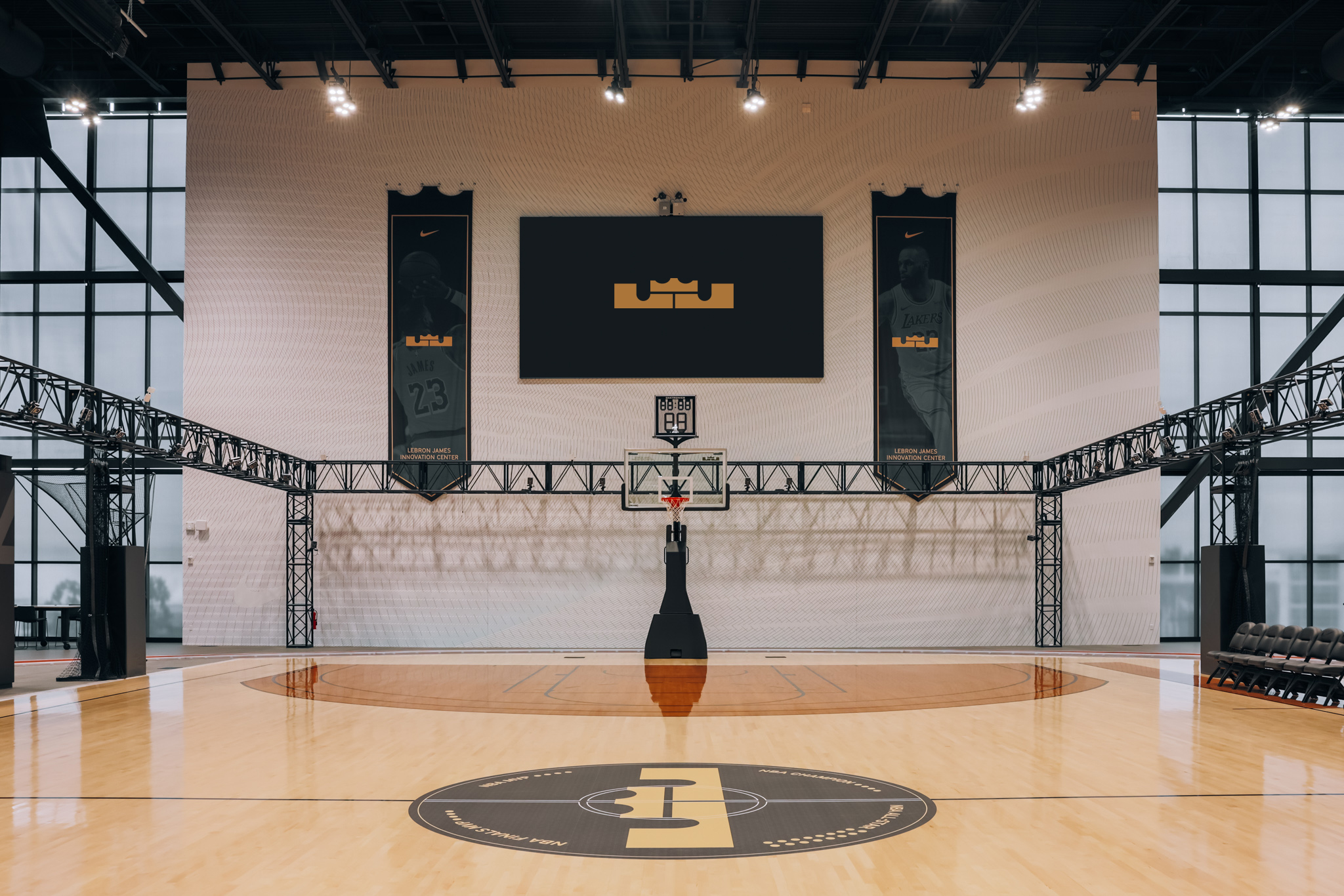 Down the road, the brand hopes to host full-speed pickup games and practices on what it’s dubbing as its “smart court.” That’ll include everything from “the best women’s pickup game in the Northwest,” according to Nurse, to potential pro team practices and Hoop Summit roster sessions in the spring.

“We can see athletes as groups, full speed and in full motion,” said Nurse. “While they’re doing that, we can continue to collect data on them. It amplifies our ability to understand athletes more holistically — playing, training and recovering.”

There is also an individual athlete “diagnostic” program being put in place that takes around 90 minutes in total. Everyone from a Nike endorser at the top of their field to an everyday rec player can receive movement, alignment and overall health feedback after conducting tests and performance motions under the eye of one of the center’s specialists. You can apply for a visit here.

“I think this building is a match made in heaven when it comes to my career,” said James. “Just being able to continue to innovate, continue to tap into yourself and give it your all.”

In looking to extend his career while maintaining his MVP-level of play, James has also recently invested in a series of fitness, meditation and training apps as he makes fitness a pillar of his on- and off-court ecosystem.

“Understanding that your body is your temple, and that’s everything in life,” he said. “And that’s not just for professional athletes, that’s for anyone, being able to understand your body and how to get the most out of it.”

After managing an ongoing ankle injury that saw him appear in only 45 games during the 2020-21 season, leading to an eventual first-round playoff exit, James is yet again facing injury during the opening weeks of the league’s 75th anniversary season. After missing another two games due to a sore right ankle, James is expected to miss action for at least a week before being reevaluated to return due to a recent abdominal strain.

By taking part in the advanced training and data-fused sessions at the LeBron James Innovation Center, James is hoping the latest incarnation of Nike’s Sport Research Lab can help him push the limits of his career, as he nears his 37th birthday in December.

“I’m always trying to figure out ways I can continue to innovate and continue to break the timeline of what they say is your prime,” he said.