How the Boston Celtics and NBA will honor Bill Russell

When the Boston Celtics take the court on Tuesday night to open their 2022-23 season, the team will don a new look hitting their storied parquet for the very first time at TD Garden.

With a deep dark green, black paneling, and trophy gold accents throughout, Boston will debut its City Edition jersey a month ahead of the rest of the league. The detailed and commemorative design honors the legacy of Bill Russell, the first Black coach in the NBA and the first Black coach to win a league championship, and his mark throughout basketball, the greater Boston area, and the league at large, and was initially conceived and created with Russell’s input before he died in July.

“Bill Russell was the greatest champion in all of team sports,” NBA commissioner Adam Silver said. “The countless accolades that he earned for his storied career with the Boston Celtics … only begin to tell the story of Bill’s immense impact on our league and broader society. Bill stood for something much bigger than sports: the values of equality, respect and inclusion that he stamped into the DNA of our league.”

The team initially slated the jerseys for November. Instead, they decided to debut the special edition design when the season starts, one of several ways in which both the team and the NBA will honor the league icon.

“When we started working on this City Edition concept nearly two years ago, we were able to get input from the current team and community leaders to fully understand the magnitude of Russell’s impact,” said Nicole Federico, Boston Celtics senior vice president of marketing and content. “Not only on the Celtics and the game of basketball, but on Boston as well.”

The Celtics have long leaned into their simple and classic green, and white colors for their primary uniforms, which are essentially unchanged from the design Russell wore while winning 11 championships and five league MVP awards with the franchise during his 13 seasons in the 1950s and 60s.

For their newest City Edition, the annual locally themed jersey created by the teams, the franchise and Nike designers pulled cues from some of Russell’s favorite memories of his time in Boston, namely, the jazz lounge and soul food restaurant Slade’s Bar & Grill, which Russell owned during the 1960s.

Russell hosted visiting civil rights leaders, athletes, and celebrities from Muhammad Ali to Martin Luther King Jr. at the restaurant. The “Celtics” font across the front of the jersey drafts from the script used throughout the restaurant’s branding during that era, with thick gold piping borders also drafting from Slade’s logo.

The side panels feature a black tonal parquet graphic, imitating the franchise’s court. Eleven gold diamonds are placed along the side panels, a nod to Russell’s league-leading tally of titles. His No. 6 is on the center waistband of the shorts, surrounded by 11 diamond icons.

“We’re grateful that Mr. Russell was able to be involved and take pride in this uniform that pays him homage before his passing in July,” said Federico. “The Celtics will continue honoring his memory by celebrating his life and legacy throughout the season.”

Typically, teams design jerseys two or three seasons in advance, with themes and storylines for the City Editions identified as an initial brief to start the timeline.

“Unfortunately, when people pass, you reflect and consider their impact on the game and on society,” said Christopher Arena, NBA’s head of on-court and brand partnerships. “He’s all of those things at once. Everything we’re doing is a culmination of that [impact].” 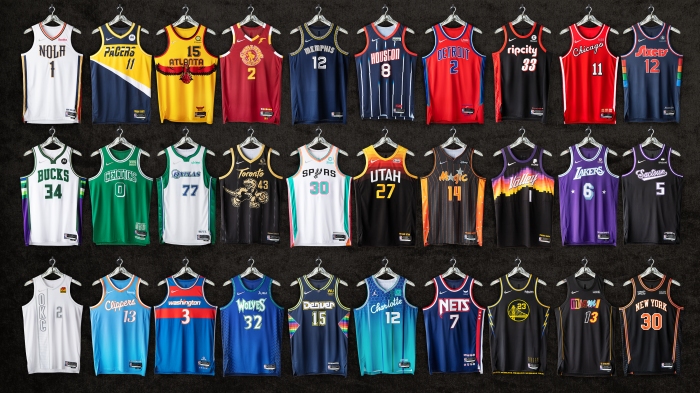 The Celtics plan to wear the Russell jerseys 11 times this season. The first time they’ll wear the jerseys for a road game will be Dec. 13, when Boston face the Los Angeles Lakers, who Russell met in six NBA Finals. They’ll begin with the opening night’s Bill Russell Tribute Game, with a second home Tribute Game planned against the Memphis Grizzlies on Feb. 12, Russell’s birthday.

For the home opener this week, the franchise will feature a pregame ceremony, with performances by Grammy-nominated singer-songwriter Aloe Blacc and an original piece from Boston’s poet laureate Porsha Olayiwola.

The team will also announce the first Bill Russell Mentoring Legacy Award to recognize outstanding leaders who exemplify Russell’s dedication to mentoring. After the game, the Celtics plan to raffle off autographed City Edition jerseys signed by the current roster of players, with proceeds benefiting MENTOR, where Russell served as the organization’s founding board member.

Across the league, every arena will feature his No. 6 at the center check-in area. For the first time in league history, Boston is placing numerical text in the key of each side of the court, paying homage to Russell’s “dominant play in the paint,” according to the team.

While teams often will use a commemorative band across the jersey shoulder with a number or initials in honor of a past player or executive, the leaguewide addition of a No. 6 patch along all 30 team jerseys represents a rarity in league history.

“You’ll see No. 6 on every jersey, every game, including All-Star festivities,” said Arena.

For the 2001-02 season, all team jerseys added a U.S. flag ribbon after the 9/11 attacks. At the 2020 All-Star Game, players on each team wore No. 24 and No. 2 in honor of Los Angeles Laker Kobe Bryant and his daughter Gianna. During the 2020 NBA bubble, players could add a social justice message from a list of options to the back of their jersey.

While the numeric jersey patch will be worn only during this season, the league announced they will no longer issue the No. 6, retiring a number leaguewide for the first time. In Major League Baseball, No. 42 is retired leaguewide in honor of baseball pioneer Jackie Robinson.

“The number retirement was always a logical thing, given his stature in the game,” said Arena. “Adam [Silver] even said, ‘Our Babe Ruth was alive for all these years.’ We think of him in that regard.”

Some franchises are planning to place a banner in their arenas to highlight the gesture, as they usually do for retired numbers of their own franchise.

Players currently wearing No. 6 can continue wearing it on their current team and are grandfathered in. If players such as Los Angeles Laker LeBron James and Alex Caruso of the Chicago Bulls, who have No. 6 jerseys at retail stores and in webstore inventories, choose to change numbers, they’ll need to request a new number.

James reflected on his overall influence when asked during a media availability about Russell’s number being retired.

“It’s what should have happened,” he said. “The man meant so much to the game, not only to the Boston Celtics, but to the NBA in general. Also, off the floor as well, with what he contributed to the Black community with his activism.”

In 2009, the league has renamed the trophy for its annual most outstanding NBA Finals player to the Bill Russell NBA Finals MVP Award. Bryant was the first to receive the award, with James now the owner of four trophies. Golden State Warriors guard Stephen Curry won the last Russell Award given during Russell’s lifetime in Boston.

“It was always a treat seeing him at games,” said James. “When I had the opportunity to win championships, seeing him up on the panel with me and giving me the Bill Russell Award, was one of the most delightful moments of my career. … For me to continue to live on his legacy wearing 6 this year, I’m going to continue to honor his legacy.”

From leaguewide decals to jersey patches and programming throughout the NBA’s upcoming marquee games and All-Star Weekend festivities, the Celtics’ new City Edition jerseys will round out a season-long tribute to a league icon.

“Having the opportunity to create a uniform that honors Mr. Russell, one of the best to ever play the game, has been incredibly meaningful to the Celtics organization,” said Federico.