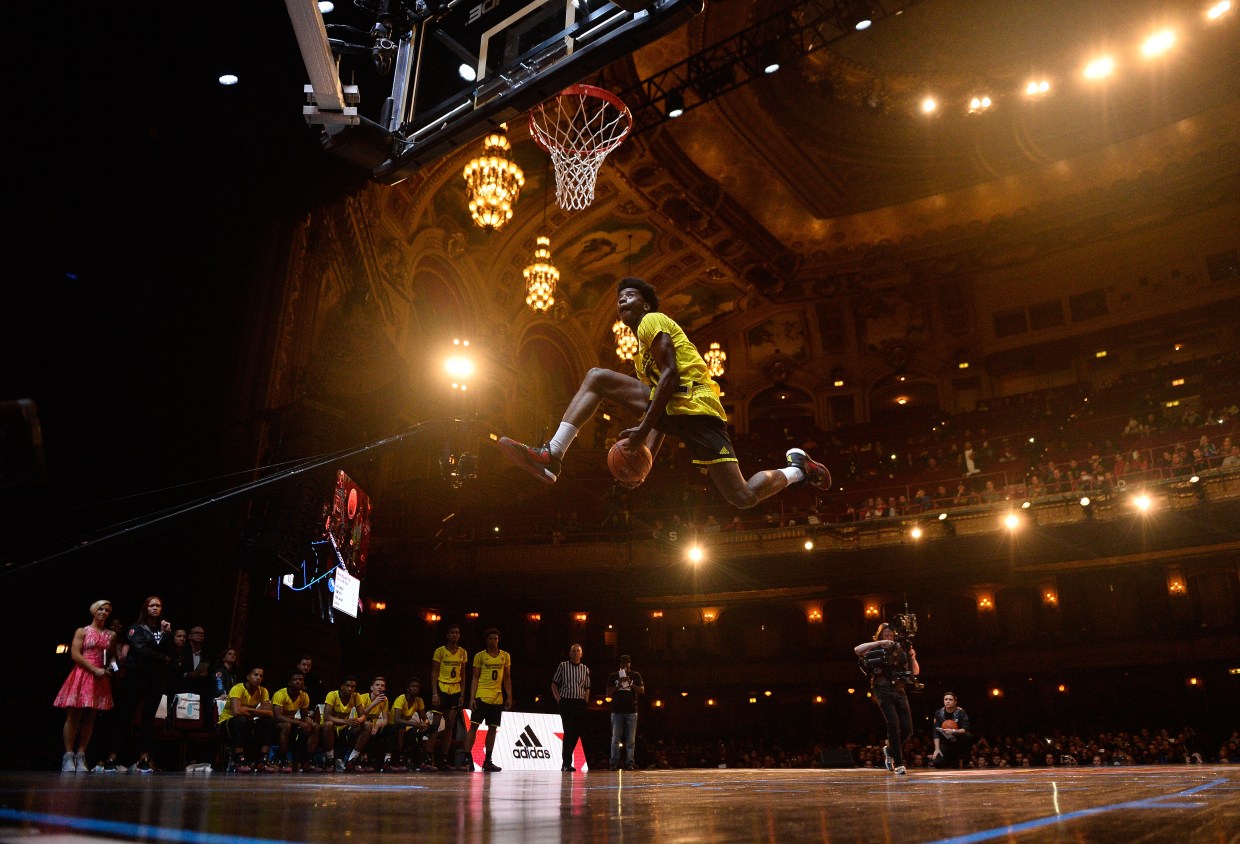 He’s got a game to match his mouth

Former NBA player Gary Payton was minding his own business, watching his son play a high school basketball game earlier this year, until the owner of one of the most renowned mouths in NBA history took the bait and erupted. No, Payton hadn’t bumped into basketball greats Michael Jordan or Reggie Miller at the concession stand. Amazingly, one of the high school players had successfully poked the old bear.

His name is Josh Jackson, and he possesses both a standout game that could make him the No. 1 pick in the 2017 NBA draft and trash-talking skills that already compete with the likes of all-star yappers Payton and Draymond Green of the Golden State Warriors.

Jackson, 19, said: “It was crazy. It was real funny. In my years I never thought I would be in a gym talking smack to Gary Payton.”

Jackson’s elite game means he can walk the walk with all that talk.

The Southfield, Michigan, native was co-MVP of the 2016 McDonald’s All-American Game. Bill Self, the coach at Kansas, where Jackson will play this fall, has compared him to Minnesota Timberwolves guard and former Jayhawk star Andrew Wiggins, the No. 1 pick in the 2013 NBA draft. With all due respect to Wiggins, Jackson’s motor and competitive fire is viewed as much higher than Wiggins had at the same stage.

“He could have been a Top 3 pick if he was in the NBA draft this year,” said one longtime Western Conference NBA scout who asked to remain anonymous.

At 6-foot-8 and 202 pounds, Jackson catches baseline two-handed alley-oops with ease, owns point guard dribbling skills, rebounds like a power forward and is comfortable playing point forward due to his outstanding passing skills. One of the few knocks on his game is his work-in-progress jumper, which has a hitch on the release. Good luck, however, finding a kid more driven to win.

“Every drill, he wants to be first,” Fraschilla said of Jackson. “Every scrimmage, he wants to be the best. He just has an alpha dog mentality. He still has things he has to work on to improve. But in this class going into college next year, he’s as intense a player as there is in terms of his attitude as I’ve seen in the last five to 10 years.”

Oklahoma City Thunder All-Star “Kevin Durant took my breath away with his talent. But this kid, he wants to win every single drill,” Fraschilla said. “Whoever is on the court who is considered at his level, he wants to guard them and dominate them.”

As a junior with Napa Prolific Prep, Jackson once yelled at a player he was guarding on the perimeter, “Pass the ball!” over and over. Eventually, the Division 1 prospect got intimidated and passed the ball. Jackson briefly smiled at the mini victory. He also is known to push his teammates to their limits with his tough love in games and trash-talking in practice.

“I want to win. I feel like any player, if you play the sport of basketball, on the court you have to be a tough guy no matter what. I don’t care who you are. Off the court, I don’t necessarily need to be that guy. But you do on the court,” Jackson said.

Ayton, considered by many to be the top prep player in the class of 2017, said Jackson is the “most competitive player I’ve ever played against.”

“He knows how to get in your head,” Ayton said. “I don’t know what type of energy he runs off of. He’s fast. He’s very unpredictable. He can shoot. Guard the post. Strong. The dude is just a freak of nature.”

Perhaps the only time Jackson has met his match in mouthiness on the court was when he went up against Green, the vocal All-Star forward, in a pickup game in Detroit two years go. Green chose to guard Jackson and made a point to trash-talk to him and stop him from scoring. While Green accomplished his defensive goal, he respected Jackson for never backing down. They’ve been close ever since.

“But I didn’t back down from him. We kept playing. And that is where our relationship started to grow. Now I look at him like a big brother.”

Said Green: “He just got that dog in him. I wouldn’t be surprised if he were the No. 1 pick next year.”

Surprisingly, off the floor Jackson is quiet and even something of a nerd.

While he played for Prolific Prep, Jackson attended Justin-Sienna High School in Napa, a Catholic school with a tuition of nearly $19,000 and a 13-1 student-teacher ratio. He started a chess club at the school and is a National Honor Society member. Most of his high school buddies were members of the Justin-Sienna lacrosse team.

“Off the court, he is really very quiet, passive,” Prolific Prep director of operations Phillippe Doherty said. “He is very good with adults. He’s very good with kids. He’s been raised really well. If you see him deal with media, he’s mature. The other kids aren’t a mature as he is. You can have a 30-minute conversation with him and he’s totally in tune …

“Other teenagers yearn for attention. He doesn’t need it.”

Jackson’s mother, Apple Jones, said she wanted her son to move to Napa before his junior year for a stronger education.

“The way people embraced him in Napa was great,” Jones said. “A lot of them are not even basketball fans. What we gathered from the school and the community was living around successful people who work hard, learning how you do it and how you carry yourself.”

Jackson said he has enjoyed his relative anonymity in wine country after moving from the Detroit area, where he was a well-known prep star.

He said he built connections in Napa that can benefit him long-term. For example, Jackson lived with the family of Shimmick Construction Co. executive vice president Chris Fassari, who treated him like a son and taught him about the business world. Napa Chamber of Commerce president and CEO Travis Stanley, who used to work for the Warriors, also mentored Jackson.

“It’s a little different at home, especially around Detroit,” Jackson said. “There is a lot of crime. It’s kind of hard to always surround yourself with a lot of good people there because you don’t really know who is really genuine, if you can trust people. But I feel like in Napa you can trust people a lot more.”

You can also trust the NBA has a strong interest in Jackson. The feeling appears mutual as Jackson acknowledged a jump to the NBA is likely after a year at Kansas.

“I definitely can see myself being a one-and-done. If at the end of my freshman year if I feel like I’m ready to enter the draft, then I will do it,” he said.

Will Jackson also be ready for big-league trash-talking? Considering his verbal battles with Payton and Green, he believes so.

“I have been through the best of the best already,” he said.