From homeless to head of a sneaker empire, Jaysse Lopez is the ‘Sole Survivor’

Jaysse Lopez has lived what feels like a movie — a tragedy, love and redemption arc all in one lifetime.

The 41-year-old Puerto Rican entrepreneur is the co-owner of Urban Necessities, a Las Vegas-based sneaker consignment store. And in late May, 6½ years after first opening, the shop moved to its biggest location yet at The Forum Shops at Caesars Palace.

Lopez – a jovial figure with a full salt-and-pepper beard, face tattoos and an unfathomable shoe collection – went from homelessness to forging one of the most renowned, and lucrative, retail operations in the world of sneakers. 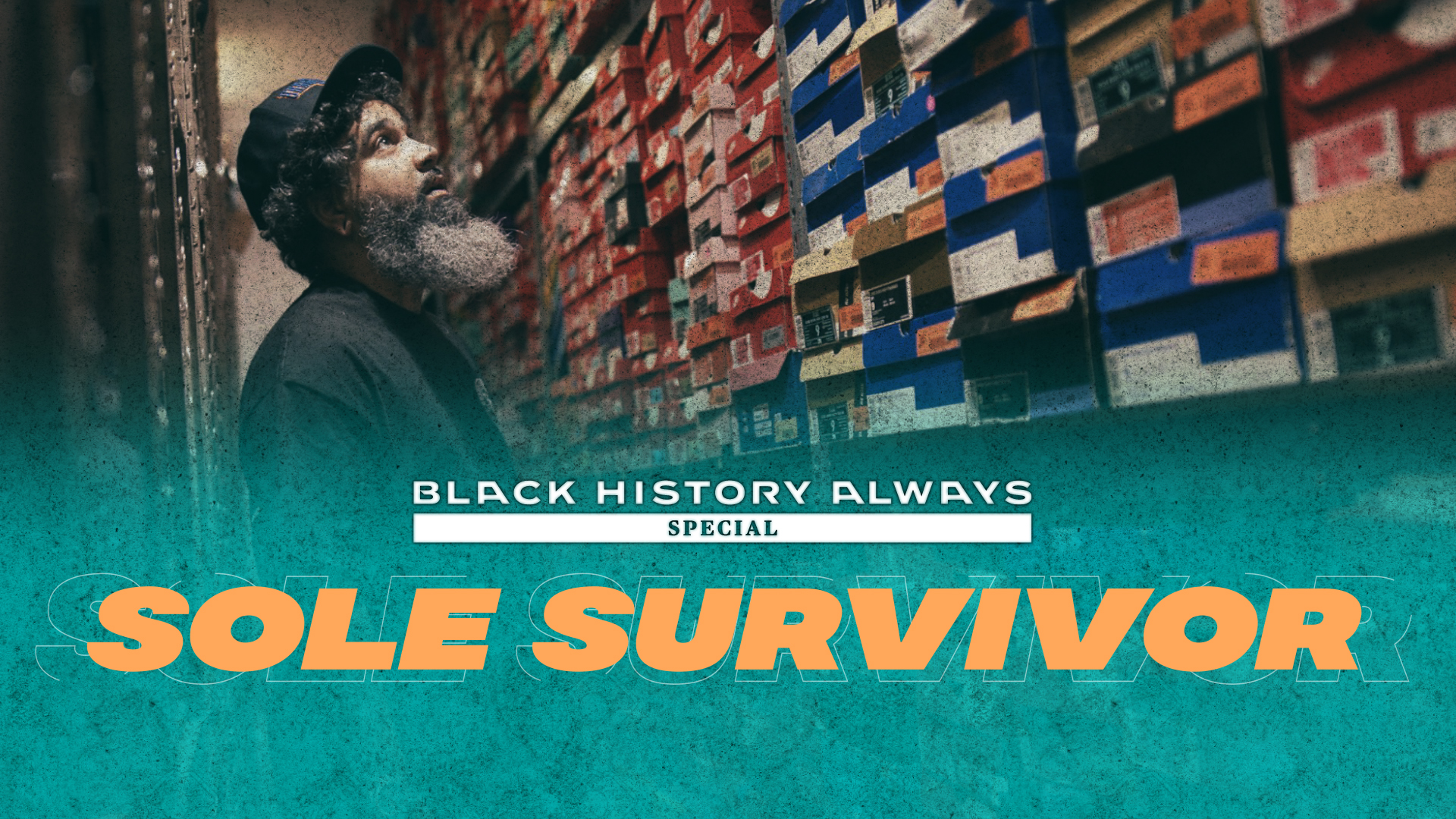 “Living the UN American Dream,” reads the bio of Lopez’s Instagram account, @twojskicks, with 423,000 followers. The one-line description bears a double meaning – an acronymic callout to the brand he’s built, and a nod to just how unconventional his path to success has been.

“When I first opened my business, I was terrified to tell my story because I didn’t feel comfortable telling people like, ‘Hey, man, give this homeless guy all your shoes,’ ” said Lopez, while filming The Undefeated’s latest Black History Month Always special, Sole Survivor, which debuts Sunday on ESPN+. “But if me telling my story gives people motivation or hope, or it lets someone know your starting point doesn’t define you, or your starting point doesn’t have to be your endpoint, then it’s worth telling.”

This story began in 2001, when Lopez’s mother gave him a plane ticket from Dallas to Vegas and a single $20 bill. “Figure it out,” Lopez remembers his mother saying, while encouraging him to get his life together by moving closer to his daughter. Lopez had a plan. But it backfired almost immediately after touching down in Sin City.

“I figured I could take those 20 bucks and throw it in a slot machine, maybe turn it into $100, and then maybe I could buy some weed,” Lopez recalled. “And then I could break down $100 worth of weed. That was legit the game plan … I put my $20 in a slot machine at the airport. I didn’t even get a chance to sit down. It was gone.”

“I’m traumatized forever off of that whole six months,” Lopez said. “It’s awkward … it freaks me out … it bothers me. … But I’ll live with the thoughts because positive came out of it.”

Lopez remembers sitting in the airport for four hours in a state of shock, too proud to pick up the phone and call family for help. Eventually, he mustered the energy to walk eight miles into the city, where he found a park that he’d sleep in for the next six months. The only thing he had was a backpack with a single change of clothes.

During six months of homelessness, Lopez ate out of trash cans and bathed in hotel fountains. He panhandled and sold bottles of water on the Vegas strip to scrape together enough money to buy himself a bus pass to travel around more efficiently and coolly. Lopez memorized routes and would hop on buses that trekked down the longest streets in town so he could stay out of the desert sun.

Then, one day – a Thursday night, he remembers – Lopez came across a sight, and practice, that he’d never experienced before.

“I find this mall and see a bunch of dudes standing in line for sneakers,” he recalls. “And I’m just like, ‘Why are you guys standing in line of a store that’s open?’ ” The patrons informed Lopez that they were waiting for a pair of sneakers scheduled for a Saturday release. They told him, if they were able to secure one, they could sell a pair for significantly more than the price the sneakers cost at retail.

“So you’re telling me you’re willing to stay here for two days and sacrifice your job, family and sleep?” he asked. The answer, for everyone in line, was a simple yes. “All right,” he prepared a proposition. “Well, which one of you guys wants to go home and I’ll stand in line? I’ll do it.”

That moment marked Lopez’s foray into sneaker resale, and allowed him, along with his two other hustles of panhandling and selling water, to get on track. A salesman at heart, who began working in retail at 14, Lopez eventually got a steady job working at AT&T. Around that time he met his future wife, Joanie Barangan, now the co-owner of Urban Necessities. But before opening his own store and breaking through in the sneaker and retail industries, Lopez experienced a slew of roadblocks.

While working at AT&T, he began experiencing seizures. Then the dominos started to fall: He was put on medical leave, and eventually let go by his employer. He was evicted from his apartment and had his car repossessed, just two weeks into dating Barangan, who graciously allowed him to move into her parents’ house.

One day, while inside an examination room meeting with a doctor about his seizures, Lopez texted Barangan, who was sitting in the waiting room. He sent her a photo of a pair of sneakers – the “Area 72” Nike Barkley Posite Max, which released in February 2013 as part of the swoosh’s sought-after NBA All-Star collection.

To this day, Lopez asserts that Urban Necessities would’ve never been possible without this one pair of sneakers. He took his income tax refund, combined that money with a portion contributed by Barangan, and, together they secured 18 pairs of Barkley Posites at $250 each. They flipped 17 of the pairs, selling them for $450 each for a total profit of more than $3,000.

Still jobless, despite filling out more than 100 applications, Lopez turned down an opportunity to visit Barangan’s home state of Hawaii and meet the rest of her family. He said he was self-conscious about his circumstances, and staying in Vegas meant that he could use Barangan’s car to drive around the city to purchase pairs to flip. Years later, in April 2019, on Hypebeast’s Business of HYPE podcast, Lopez recounted this period of his life hustling for sneakers. He revealed what he told essentially every owner of a sneaker store in Vegas. It might just be the realest thing he’s ever said – ultimately, a prophetic statement: “Remember the name, remember the face, the day’s gonna come I’m gonna buy every shoe.”

Lopez and Barangan split briefly, and he began taking low-ball offers for the 220 pairs of sneakers he had compiled just to stay afloat. Money from sales lasted him about five to six months before inventory dried up and he had to crash on a friend’s couch. With a small Vegas trade show approaching, Lopez persuaded clients he’d worked with in the past year to allow him to sell the sneakers they weren’t wearing on consignment. If he could successfully sell their shoes at the show, all he’d charge them was a $20 fee per pair, no matter the price of the sale. In two weeks, Lopez turned 18 pairs of personal inventory to 684 pairs that he took to the trade show. In one day, he sold 450 pairs. But, more importantly, that day, he arrived at the realization that he could run his own store.

On Sept. 17, 2014, Lopez officially opened Urban Necessities – its name inspired by the United Nations, and the concept of all walks of life coming together on a unified front – at the Boulevard Mall, the oldest shopping center in Las Vegas. He picked a storefront that had been closed for seven years, on a hallway in the mall that hadn’t had any businesses there for five years. And though they still weren’t speaking, Barangan gave Lopez a piece of art for the new store, which meant so much to him that he called and told her he couldn’t be – or run the business – without her.

By the end of December 2014, in its first 3½ months of business, Urban Necessities notched $1 million in sales. In 2018, the store left the Boulevard as the mall’s highest generator of both foot traffic and revenue, and moved to the Fashion Show Mall on the Vegas Strip for three years.

In May, Urban Necessities relocated again, this time into a two-floor storefront inside the mall. The retail space is 18,000 square feet, adorned with marble floors and white lights. The centerpiece of the store is a 12-row, 156-foot-long sneaker wall, with more than 4,000 pairs on display (and more than 40,000 more pairs in inventory). “Willy Wonka-esque,” joked Lopez about his shiny new store that also features an ice cream shop, barber chairs and a tattoo parlor.

“One of the things that I’ve always thought has been wrong with retail is that, as retailers, we haven’t done enough to motivate you to come back a second and third or fourth time,” Lopez said. “Anybody could get you in there once, but for us, it was about, ‘How do we get you to stay talking about the shop in a positive light and be motivated to take that trip across the country or across the world to come visit?’ Because that’s what it’s going to take for us to be able to provide our consignors a fair shot of moving their items.”

Since 2014, Urban Necessities has built a network of more than 40,000 people who have commissioned the store for consignment. And Lopez won’t let anyone forget that, no matter how big his brand has gotten, one thing has remained the same.

“This literally started with one shoe,” he reflected of the Barkley Posite Max, “but in reality, what it’s turned into in 6½ years, is we’ve generated over $100 million in sales with $90 million of that going back into the community.”

According to the Urban Necessities website, the store’s consignment rate is “10% of the sale or $20, whichever is greater.” (By comparison, on two of the most popular sneaker reselling platforms, commission/processing/seller fees can cost users as much as 25% on GOAT and 13% on StockX.)

“We have the lowest consignment rate in the country,” Lopez said with pride.

Sneakers once saved Jaysse Lopez’s life – and he kept going. During the production of Sole Survivor, while sitting inside Urban Necessities one morning before the store opened its doors, he took it all in.