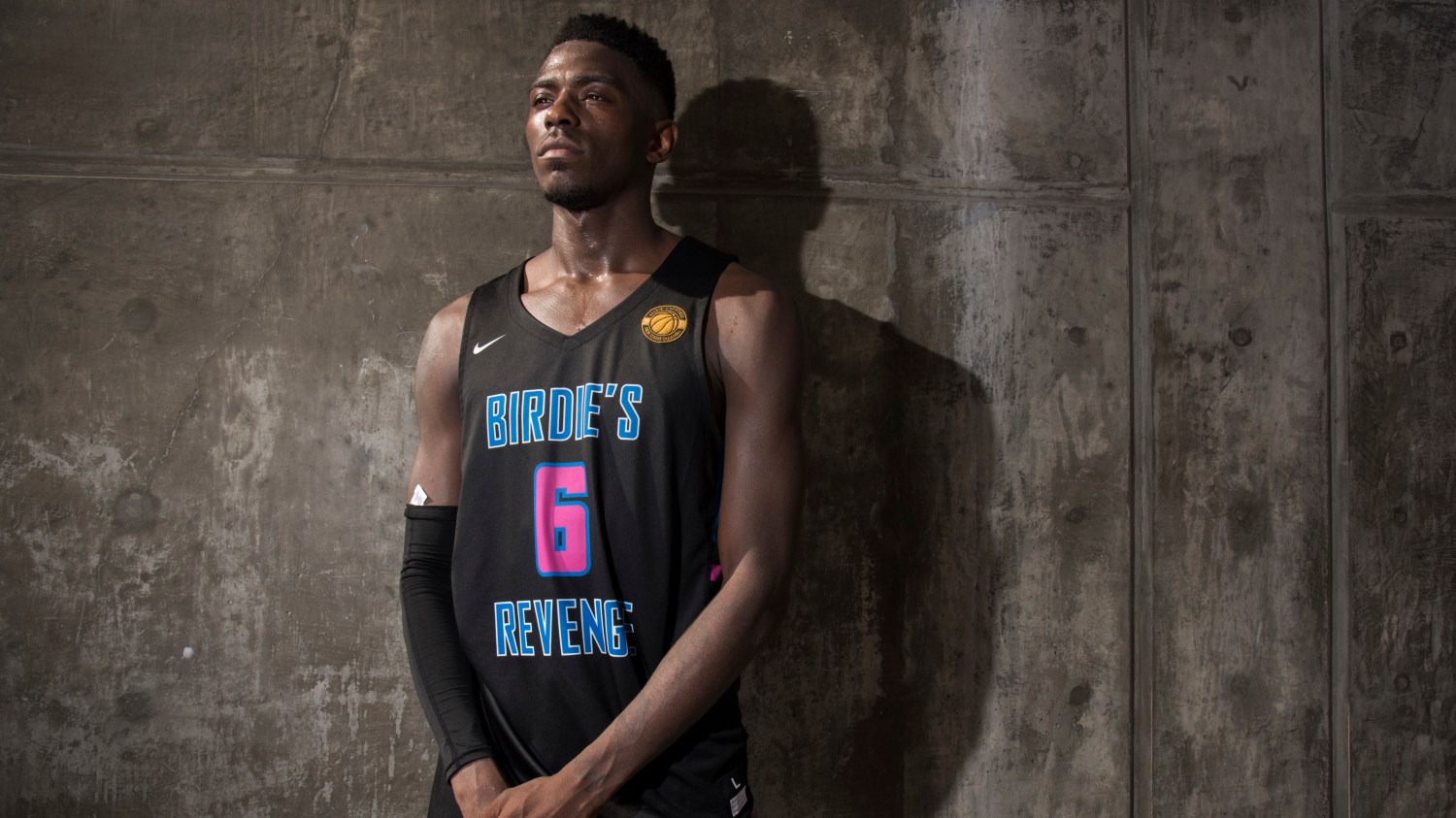 Reigning two-time Drew League MVP Frank “Nitty” Session is having another superstar season, having thrown down multiple 40-point games in recent weeks. The Drew League was established in 1973 in South Central Los Angeles by Alvin Willis with just six teams. Melissa Lyttle for The Undefeated
Basketball

The message from Session, who has dominated most NBA players he has battled at The Drew Pro-Am: ‘I’m about to show you this is my league’

After finishing a sweet spin move with a layup early in his Drew League debut, Chicago Bulls guard Denzel Valentine was clearly feeling himself, barking in the face of the player he had just taken to the rim.

Moments later the barking turned heated, with Valentine, the 2016 college basketball Player of the Year, pounding his right hand to his chest (perhaps channeling Denzel Washington’s final scene from Training Day) as he aggressively stepped to the guy he just burned, Franklin Session.

“He told me that’s why he’s in the league,” Session recalled of the chatter. “I told him, ‘I don’t care where you play.’

How Session showed Valentine was disrespectful, and bordered on being downright abusive.

The Watts-raised guard, who goes by the nickname “Nitty” and works in a Los Angeles sneaker store, provided Valentine blow-by-blow commentary while scoring 44 points and grabbing 11 rebounds in a one-sided battle that was cruel and, when it comes to Session, typical.

Valentine, by game’s end, had to understand that the videographers, fans and NBA elite (including Isaiah Thomas, DeMar DeRozan and Rudy Gay) who filled the King/Drew Magnet High School gymnasium stands weren’t there to see him.

They were mostly there to see Session, the reigning two-time Drew League MVP. During a summer where Los Angeles fans are anxiously awaiting the arrival of LeBron James, the high-flying Session is providing the basketball thrills for local basketball fans.

Valentine would have benefited from a scouting report. Had he done research he would have found that Session has victimized many “names” in the Drew League over the years, including Nate Robinson, DeRozan and Gilbert Arenas.

Earlier this year a fan took to Twitter to ask Damian Lillard the best non-NBA player he’s gone up against. Within a minute, the Portland Trail Blazers All-Star guard posted his response:

Lillard knows firsthand, having played a season in the same backcourt as Session at Weber State. DeRozan has called him a “legend,” and James Harden has introduced him to representatives from the Houston Rockets because he believed Session deserved a look.

Many, including U.S. Rep. Maxine Waters (D-California), showed up to see the reigning NBA MVP.

The crowd was normal for Session, who plays to a packed gym every weekend.

So why is a 29-year-old guy who has held his own against every NBA player that he’s faced not in the league?

“It’s all on me,” Session said. “There was a time where I was my own worst enemy.”

The afternoon call comes from Randy Rahe, who’s about to enter his 13th season as the head basketball coach at Weber State.

While word of the legend Session’s built for himself in Los Angeles has traveled across state lines to Utah, Rahe just learns of the 44-point smackdown of Valentine.

“Of course he did,” Rahe said. “He’s got a chip on his shoulder to prove he can kick their a–, basically.”

Rahe, during the 2009-10 season, might have had one of the most talented backcourts in college basketball. Lillard, a sophomore, was the Big Sky Conference MVP, averaging 19.9 points on the way to being named an honorable mention All-American.

Session, a junior who transferred to Weber State from junior college, was the Big Sky Newcomer of the Year and second team all-conference as he averaged 10.2 points per game. He was second in the league in steals and, despite his size, finished fifth in the Big Sky in blocks and third in offensive rebounds.

The college highlight reel of Franklin Session, the Drew League star who played a season in college alongside Damian Lillard at Weber State.

“He always thought he was the best player on the court, regardless of who he played against,” Rahe said. “Very athletic, could get to the rim and a great in-between game, and confident and just had a knack for the ball.”

With Lillard and Session coming back the following season, the team had high expectations. But less than a month after losing to Cincinnati in the opening round of the NIT, Session got booted.

“I won’t get into a lot of the details why, but he needed to grow up, he needed to mature,” Rahe said. “For him, it was the first time being away from home, and coming to Utah from Los Angeles, it was a different culture for him to embrace.”

“My juco coaches didn’t make me practice because they knew I would dominate in the games,” Session said of his year at Saddleback Junior College, where he was the 2009 Orange Empire Conference MVP. “I wasn’t a good practice player at Weber. I wasn’t the main guy anymore, and that got to me.

“I was young, and I ruined that situation for myself. Them not having me back humbled me and showed me that I had a lot of growing up to do.”

Session said that while he was good at basketball, he didn’t love the game, which he played only after the basketball coach at Jordan High School in Los Angeles spotted him skateboarding one day and thought his athleticism would translate into basketball.

That led to a basketball career that took Session from high school defensive specialist to juco league MVP to Division I conference Newcomer of the Year to back home, where he played his final season of college basketball at Division II Cal State LA, averaging 16.3 points a game.

That successful career resulted in Session being drafted in 2011 by the Los Angeles Defenders of the then-NBA Development League. But a broken hand ended his season.

With professional hoops behind him, Session found a job, fell in love, got married, became a father and found comfort with life outside of a structured basketball environment. He played in a few adult rec leagues and the Drew League mainly as a means to stay in shape.

His athleticism caught the eye of rapper The Game, who didn’t simply ask Session to join the team he was putting together. The Game expressed a desire to build a team behind him.

“He saw something in my heart and determination on the court that I didn’t see in myself,” Session said. “I never felt like I’d be the type of player to build a team around. But he told me, ‘If I had you, I’d win every game.’ ”

Give The Game credit: He clearly knows basketball.

That was evident when Session, in 2016, was named the co-MVP of the Drew.

In 2017, Session won MVP a second time and led his team, Birdie’s Revenge, to the Drew League championship.

“That meant a lot to me because not a lot of guys who aren’t playing professionally get the MVP at the Drew,” Session said. “Most of the guys who get it are playing overseas or are some hot up-and-coming guy. So to get my second trophy, it was special.”

And it created opportunities. By the end of the 2017 Drew season, Session, who at the time was working for a cellphone carrier, had several professional basketball offers. He opted to play in Canada, for the Island Storm in the National Basketball League of Canada.

Charlottetown, a city of just over 36,000 on Prince Edward Island, is about as far east as you can go in North America. Session, this time mature enough to handle being away from home, quickly became so popular that the Storm hung a larger-than-life image of him on the side of the team’s arena.

Session averaged 19.6 points and 9.7 rebounds in his first full season of professional basketball and was named the NBLC Newcomer of the Year. He was one of the eight finalists for the league’s MVP award, with Moncton Magic coach Joe Salerno describing him as having “done more for his team as an individual than any other team in the league.”

“That just gave me more confidence,” said Session, relaxing on a bench at a park near his suburban home in Orange County. “These past few years have shown me that I can play against anybody, on any level.”

It’s just over an hour to game time when Session enters the gym for a Saturday afternoon Drew League game. While teams fiercely battle, Drew League announcer George Preciado interrupts his commentary to announce the arrival of basketball royalty. “There he is,” Preciado says, “the two-time Drew League MVP, Frank Nitty.”

Session’s change in fortune in his life is reflected on the tagline of his Instagram page:

Nitty, dressed in black with a small bag draped over his shoulder, looks more skateboarder than baller. But when he finally takes the court — and the crowd has swelled to see Session and Birdie’s Revenge play — he’s all business.

In a laid-back game by his standards (28 points, six rebounds), you can’t take your eyes off of Session. His chatter is nonstop, whether it’s talking smack with Toronto Raptors forward Pascal Siakam or verbally challenging Tarron “The Beast” Williams, a solidly built 6-foot-7, 280-pound bruiser whose claim to fame was winning a Red Bull sponsored one-on-one tournament at Alcatraz.

Session has a good shot of achieving that. He’s been Drew League Player of the Week for six of the nine weeks this season.

On the day of the matchup that made Valentine internet-famous, Session’s team, Birdie’s Revenge, was already preparing for a tough battle against the Hometown Favorites team that featured USC-bound Kevin Porter Jr., former NBA draft pick Grant Jerrett and Loyola-Marymount forward Eli Scott.

It was during the pregame huddle when one of Session’s teammates noticed Valentine, one of a large group of NBA players who get placed on teams when they drop in.

“How they gonna let Valentine play?” the teammate asked.

Session looked across the court toward the other huddle and asked, “Who’s Valentine?”

As Valentine’s credentials were revealed to him, Session nodded confidently. “We don’t need to worry about him. We just need to play our game.”

There were oohs and aahs from the crowd when Valentine crossed Session over early, and maybe that raised his confidence. The verbal back-and-forth started early but escalated when Valentine made a layup and shouted, according to Session, “You can’t guard me.”

Actually, Session could guard Valentine (he only scored nine points). After a Valentine miss, Session walked toward DeRozan’s courtside seat and shouted:

“This [expletive] in the league? How?”

It was Valentine who couldn’t guard Session. After the game Valentine left the gym quickly, probably not realizing the 44-point thrashing delivered by Session was likely trending by the time his car hit the 105 freeway.

For Valentine, it was a lesson.

For Session, it was all in a day’s work.

“Everybody knows to just leave me alone and don’t talk s— to me,” Session said. “He learned the hard way.”

What’s next for Session? Right now he’s weighing several options that include going back to Canada or playing overseas. Perhaps another opportunity with the Defenders, who released him before the start of last season.

“I didn’t always love the game, but now I do,” Session said. “I’m more mature now, and I’m ready to take advantage of the opportunities that I have.”