‘Do the Right Thing’ — remixed

A new poster for a film that never gets old

The original poster for Spike Lee’s 1989 Do the Right Thing is in many ways a narrative trap. On opposite sides stand Sal and Mookie, white and black, business owner and worker, looking simultaneously up and at viewers asking the question the film makes you consider: Which of the two did the Right Thing? The paper product is confrontational — a surface-level presentation of a film as subtly complex as Do the Right Thing. 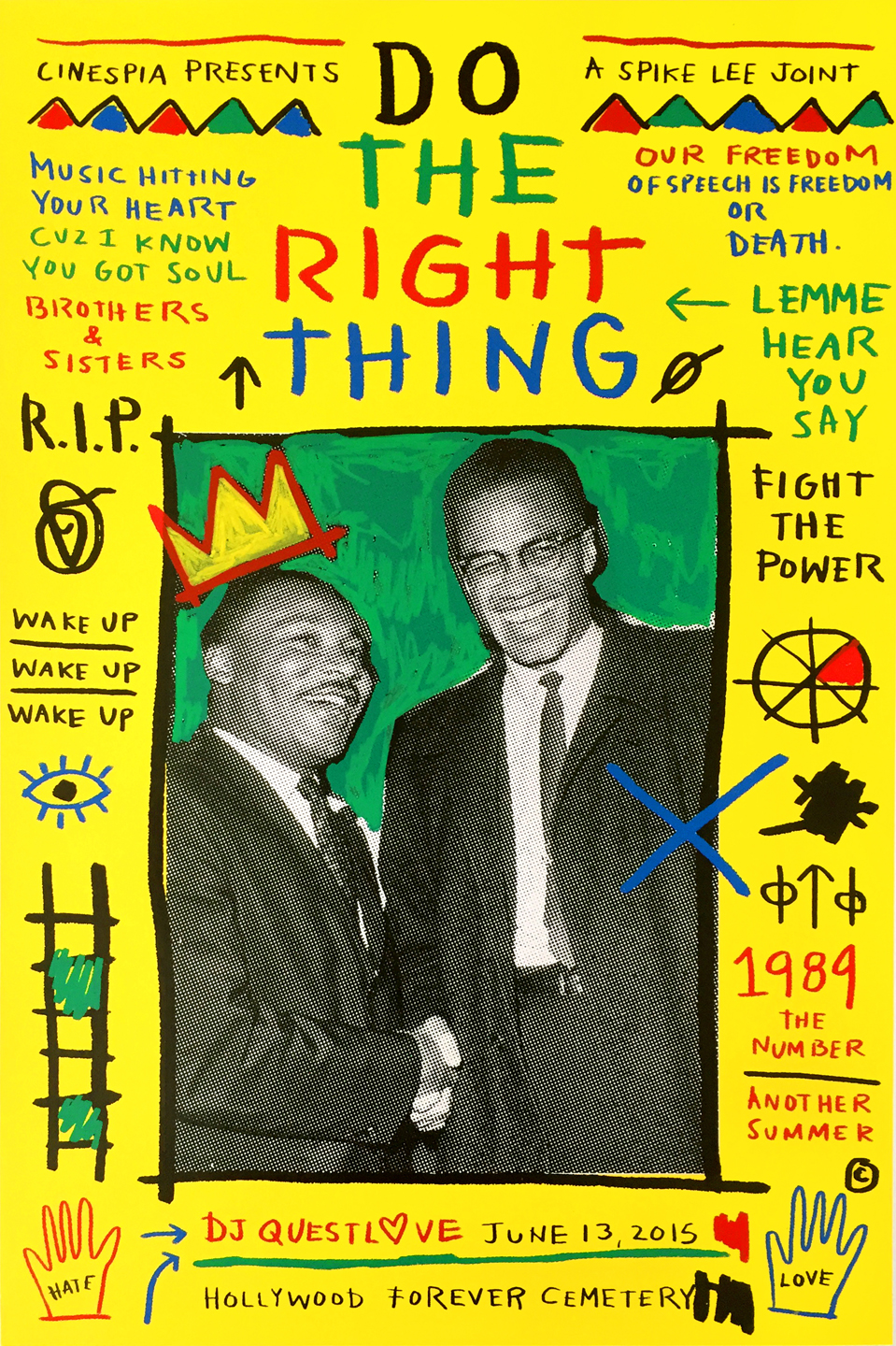 Movie posters are advertisements, and the poster drives curiosity. It does its job. But an alternate poster, designed by Los Angeles pop artist Alia Penner, captures a deeper essence of the film. Cinespia hosts screenings of classic films and premieres across the Los Angeles area in various movie palaces. Founded in 2002 by John Wyatt, its most popular series occurs during the summer at Hollywood Forever Cemetery, where crowds of up to 4,000 bring blankets and picnic meals to watch the massive outdoor projections. Penner’s been designing posters for Cinespia screenings since ’08 (which they sell at the events and online), though she said she usually just makes alternate posters for “the movies that have a lot of loyal fans.” Last year, that included Do the Right Thing.

“I made this poster thinking, ‘What would Basquiat do?’”

Inspired by Jean-Michel Basquiat, the bright poster looks like an ad characters in the movie might walk by in their Brooklyn, N.Y., block. Front and center is a portrait of Martin Luther King Jr. and Malcolm X shaking hands, a Basquiat-style crown adorning King’s head and an X beside Malcolm’s. It’s the same picture — credit goes the late Henry Griffin of the Associated Press; it was March 26, 1964, in Washington, D.C. — that Smiley tries selling throughout the film. The characters continually refuse to purchase it — or buy only to shoo off Smiley. “There are so many important characters, and I wanted to collage different moments together,” Penner said. “Malcolm X and Martin Luther King Jr., Public Enemy’s Fight The Power and Radio Raheem’s Love and Hate speech.” It works. And sadly is still relevant.

When Eric Garner died from a New York police officer’s chokehold in July 2014, he was swiftly compared to Radio Raheem’s cinematic death. Lee himself furthered the connection, splicing footage of the fictional and real deaths and posting it on YouTube. Following the deaths of Garner, Michael Brown, Tamir Rice, Freddie Gray, some criticized everything from the hashtags to the marches to the tossing back at police tear gas tossed by police in Ferguson, Missouri. The old debate was back, about the right and wrong ways to fight the power.

“I made this poster,” says Penner, “thinking, ‘What would Basquiat do?’” It’s hard to look at, actually, with Martin and Malcolm, with Radio Raheem and his ideas of love vs. hate, with those Fight the Power lyrics, and not think of a Basquiat statement, one that has inspired Jay Z, among others: “Most Young Kings Get Their Heads Cut Off.” But that’s too pessimistic, too surface-level, right? This is a poster for Do the Right Thing, and considering how the movie still resonates, particularly with its underpinnings on the destruction of property versus the destruction of life, another Basquiat quote might be more appropriate: “Fire will attract more attention than any other cry for help.”

Austin-based Brendan Bures is an editorial contributor to the 8 App and is a Writing & Research Fellow for HRDCVR. Bren, previously: the Orlando Sentinel, NCAA.com, ATTN:, SBNation, and the Tallahassee Democrat.