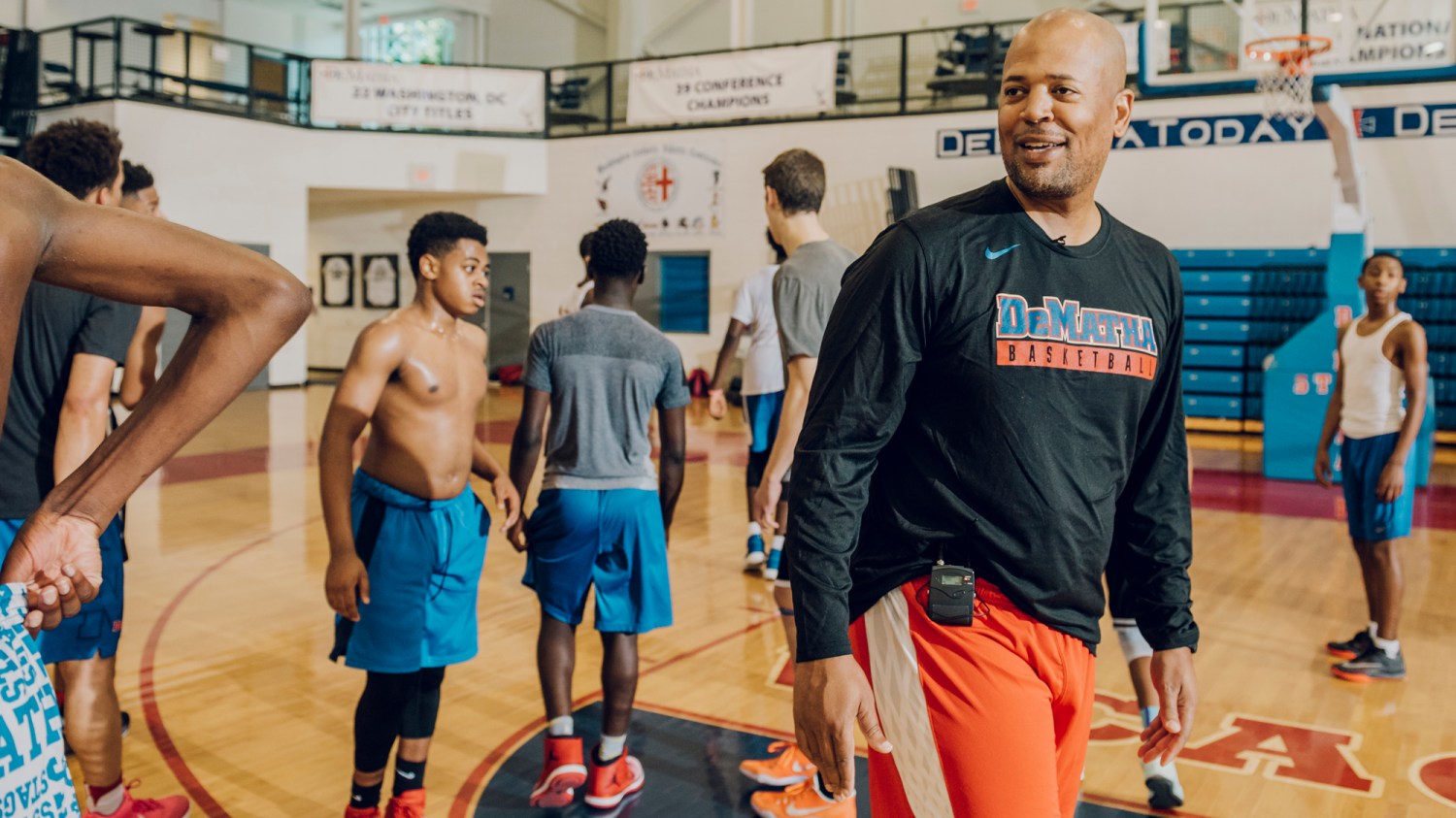 HYATTSVILLE, Maryland — As the sounds of squeaking sneakers and bouncing basketballs filled the Morgan and Kathy Wootten Gymnasium on the campus of DeMatha High School, varsity coach Mike Jones stood off to the side surveying the scene. What he saw on the court during the recent summer session of the school’s annual basketball camp was a dramatic increase of 7- and 8-year-olds.

Call it the Markelle Fultz effect.

“There have been a lot of stories written about Markelle first coming to camp here when he was 7 years old,” Jones said. “So it’s no surprise that our camps this summer had more 7- and 8-year-olds than we’ve ever had.”

Last Thursday, thousands of people flocked to Seat Pleasant to honor Kevin Durant, who celebrated his first NBA title this past season with the Golden State Warriors.

But if you honor Durant, you also have to honor Prince George’s County, the place where Durant and other established NBA players like Michael Beasley, Victor Oladipo and Ty Lawson honed their NBA talents.

And if you recognize Prince George’s County, you also have to recognize the longstanding basketball brilliance at the dominant school there, DeMatha.

When Fultz became the top pick in this year’s NBA draft, he also became the first Prince George’s County-connected player to be taken first overall (selected ahead of Durant, Len Bias, Danny Ferry, Steve Francis, Beasley and Oladipo, who were all No. 2 picks). Fultz joined a long list of stars who played at DeMatha that includes Ferry, Oladipo, Adrian Dantley, Adrian Branch and James Brown.

We all know how DeMatha earned its place on the basketball map. The program was established by Morgan Wootten, the Hall of Fame basketball coach who never had a losing season in 46 years.

“He was instrumental in integrating the school in 1959 by accepting African-American players,” said Bill Hayes, who, along with DeMatha alum Dereck Whittenburg, produced the recently released documentary on Wootten’s life, The Godfather of Basketball. “Morgan helped change the game and has had an impact on thousands of people.”

The man given the difficult task of carrying the torch has been Jones, who was hired as an interim coach after Wootten’s retirement before being given the head coaching job the following season.

Aside from a hiccup during the 2012-13 season when the Stags finished 14-17, Jones has helped continue the program’s storied legacy in leading the team to five Washington Catholic Athletic Conference titles, one D.C. metro title and a No. 2 ranking in 2005 and 2007.

“I learned from the best, and one thing I got from Coach [Wootten] is never be married to one way of coaching, and always adjust to the talent that you have,” said Jones, who played two years of varsity basketball under Wootten. “Coach is like Yoda; he’s teaching you so many things every time you speak to him and, at the time, you don’t even know it. It’s later when you find yourself in certain situations where you find yourself drawing from your conversations with him.”

You could say that one of the best basketball programs in America is a throwback. While DeMatha is allowed to recruit, incoming players aren’t promised starting positions, guaranteed minutes or even spots on the varsity team.

Even Fultz, whose talents were well-known to DeMatha coaches, as he participated in the summer camps for years, didn’t make the varsity until he was a junior.

“Markelle, Victor [Oladipo], all of those guys came in and played on the freshman team the first year,” Jones said. “Markelle wasn’t the guy he is today. He was 5-foot-9, and it wasn’t like when he walked into the gym you looked at him and said, ‘Oh, my God.’ ”

Fultz tried out for the varsity team as a sophomore, thinking he was good enough to contribute.

He didn’t make it.

“The other coaches felt like he should have made varsity, but at the time I truly believed starting on the JV [junior varsity] was the best thing for his development,” Jones said. “I wanted him to play every minute, and I wanted him to learn about leading a team.”

Many believed the slight might have led Fultz to transfer, but he stayed at DeMatha. By the end of his sophomore season, he was getting minutes with the varsity before becoming a dominant force as a junior.

“I really felt that helped him, in terms of his inner fire,” Jones said. “He played like he wanted to prove me wrong.”

The moment Jones felt Fultz would be truly special? That came in the first quarter of the 2015 Hoophall Classic when unranked DeMatha faced No. 2 Roselle Catholic and the player considered the best guard in the country, Isaiah Briscoe.

“The play I remember distinctly is Markelle trying to dunk over what seemed like half of their team,” Jones said. “We all stood back on the bench in amazement. And the way he got up and walked with confidence to the free throw line, it was like someone fast-forwarded his maturity six months in one play.”

DeMatha won that game by 24 points, and Fultz had grown in both stature (he was 6-foot-4) and ability.

By his senior season in high school, Jones knew Fultz would be a pro.

“And when I saw him playing in the McDonald’s All-American Game, I thought for the first time he could be a one-and-done,” Jones said. “But did I see him being the top pick of the draft? Never.”

Having the top pick of the draft should help DeMatha maintain its dominance.

“It’s just a testament of the type of program we have here,” said Kameron Taylor, a 2012 DeMatha graduate who played professionally last season in Germany. “Look at the banners and the trophies and all the history here. It’s a testament to Coach Jones and Coach Wootten and how they develop their players.”

Taylor was at this summer’s DeMatha basketball camp, helping out as a counselor. As he and Jones surveyed the scene on three full courts featuring a record number of younger players, Jones was asked whether Fultz stood out as a 7-year-old.

Jones paused, and thought for a moment.

“I don’t remember him dominating,” Jones said. “But I do remember his mom standing on the side looking like she wanted to go home.

“Some kids stand on the side and mess around before they suit up. Markelle would hit the door, immediately put his stuff on and start playing,” Jones said. “This was a kid who loved basketball.”